Today, genre-bending artist Koe Wetzel has released his third LP Sellout via Columbia Records. The album comes alongside an official video for new single “Cold & Alone,” which was directed by George Nienhuis and stars Wetzel as he experiences the mixed emotions that come with the demise of a relationship. Watch HERE. Produced by long-time collaborator Taylor Kimball, Sellout also includes previously released tracks “Good Die Young,” “Kuntry & Wistern,” and “Sundy or Mundy.” See full tracklisting below.

Last week, Wetzel announced that he and Read Southall will co-headline a mini acoustic tour next month along with Austin Meade who is slated to open each night. The run of shows kick off December 8 at Oklahoma City’s The Criterion where the two headliners will share a stage and trade off playing songs from their respective discographies to a limited capacity live audience. Visit https://koewetzelmusic.com/ for tickets and more information.

The Texas-born singer, songwriter, guitarist, and producer continues to unapologetically trail blaze between grunge, country, Americana, and damn near everything else under the sun on Sellout. From 2015 up until signing with Columbia Records this summer, Wetzel quietly sold over 200,000 units independently and went from playing bars with chicken wire in front of the stage to hosting and headlining his own music festival. With over 485 million streams and video views to date, Wetzel continues to build his diehard audience.

In a major win for Native American rights, the Supreme Court decided in a ruling yesterday that roughly half of the state of Oklahoma are Native American conservation lands. The case was brought about by a convicted rapist named Jimcy McGirt, a member of the Seminole nation, who claimed that he could not be prosecuted by the state of Oklahoma because the assault occurred on lands claimed by the Muscogee Creek Nation.

Although the federal government can still prosecute the people of this land – about 1.8 million in population (15% Native American) and 3 million acres in size – they are protected from the state and may even be exempt from state taxes.

It was Neil Gorsuch, a Trump appointee, who tipped the 5-4 vote to the liberals, citing the Trail of Tears as precedent and reasoning that “Because Congress has not said otherwise, we hold the government to its word.” Tribal leaders of the Five Tribes of Oklahoma favored the ruling. Republican Chief Justice John Roberts, however, believes that the decision will damage the Oklahoma state court’s authority.

The 71 year old McGirt accused of raping a young girl in 1997 was spared of a prison sentence but could still be tried in federal court.

At 15 tracks the album will include features from some of the most notable names in R&B including Miguel, Brandy and Masego. MANTIC will also feature previously released tracks “Last Time” which has over 10 million streams and video views worldwide and “Touchy Feely” which Noisey included on their “18 R&B Songs That Make Up for This Unbearable Year List” and explains: “[Ro James] has a penchant for sensual songs, and his sophomore album is shaping up to be just as sexy as his last.” MANTIC also sees James teaming up with frequent collaborators including producers DJ Camper and Salaam Remi, as well as songwriter Verse Simmons and producer Soundz, the same team behind James’ Grammy-nominated, RIAA certified platinum single “Permission.” The track was the lead single from his critically-acclaimed debut album ELDORADO.

Ro James on what MANTIC means to him and the inspiration for the album: “The music I create evokes a feeling of romance, but I wanted to dissect that word and break it down by taking the ‘ro’ out of it. MANTIC refers to divination and prophecy-seeking knowledge of the future through supernatural means. Speaking things into existence and living forward, having faith in where you’re supposed to be and where you’re going.”

Born in Stuttgart, Germany to a military father turned preacher, Ro James found himself moving around for most of his childhood. From Indiana, California, Hawaii, Oklahoma to the place he now calls home, Jamaica, Queens, music was always in the forefront of James’ life. His musical inspirations come from the sounds of Johnny Cash, Prince, Tupac, Jodeci, and more. His debut single “Permission” was released in late 2015 and catapulted his career to the next level with the track topping the Urban Adult radio chart for 10 weeks consecutively. “Permission” was the lead single from James’ debut album ELDORADO. Released in May 2016, James’ debut album ELDORADO entered the charts at #3 on The Billboard R&B Albums Chart and #8 on the Top Hip-Hop/R&B Albums Chart. The success of the album earned him nominations for Best R&B Performance at the 59th Annual Grammy Awards Best New Artist at the 2017 NAACP Image Awards and Best New R&B Artist at the 2017 iHeart Radio Music Awards. He delivered an electrifying performance the track along with “Already Knew That” from ELDORADO on the Soul Train Awards stage. James embarked on his own headlining North American “XIX” Tour with dates in Europe in Amsterdam, London and Paris in early 2017. He appears on Luke James’ latest single released last month “go girl” with BJ The Chicago Kid, which they performed together on the Soul Train Awards late last year. He’s now readying his sophomore album, MANTIC which is set for release on May 29th via ByStorm Entertainment/RCA Records.

UK recording artist Yungblud, whom NME has said carries himself like “a hyper-addictive mix between rapper Eminem and Johnny Rotten,” releases his self-titled debut EP today via all digital partners. Listen to Yungblud HERE.

With his frenetic take on alt-pop equally inspired by punk, hip-hop, and UK garage, Yungblud uses breakneck flow and tongue-in-cheek attitude to deliver pointed lyrics about everything from gentrification to disenfranchisement to addiction without getting heavy-handed. “I want my music to always have a message, but I don’t want to preach to anybody,” says the Northern England native, whose given name is Dominic Harrison. “This music’s just an outburst of emotion and anger, and everything else going on in my head.”

The Yorkshire-born, London-based Yungblud, produced by Matt Schwartz – known for his work on Massive Attack and Kylie Minogue, and brought to Geffen/Interscope by executive producer Martin Terefe who has worked with Jason Mraz and KT Tunstall.

The EP features “King Charles” and “Tin Pan Boy” (which Wonderland called “a bold and biting call to social justice”) and the current single “I Love You, Will You Marry Me,” which takes its title from a real-life, ill-fated marriage proposal spray-painted at a public housing project in South Yorkshire. Watch the live performance video for “ILYWYMM” HEREand the self-directed video for “Tin Pan Boy” HERE. The EP also includes two brand-new songs, “Anarchist” and “Polygraph Eyes,” a seedy portrait of a Saturday night out that also serves as a delicate commentary on consent and “lad mentality.”

In a recent profile of Yungblud, Wonderland raves about his “captivating songwriting,” while Nylon notes that “Harrison imbues every ounce of raucous energy into songs that defy genre.” NME has called him “utterly thrilling” and says that “what makes Yungblud so intriguing is the versatility in his material already, and how confident he feels about pulling it all off.”

Yungblud, who is on the road in Europe through early February, hits the road for a U.S. spring tour with K.Flay beginning March 12 in Washington, DC. “If you ever get the chance to see him perform live, his passion is evident in the way he throws himself around the stage, spitting ferocious lyrics at the front row and strutting around with the confidence you only have if you were born to do something,” writes Wonderland. 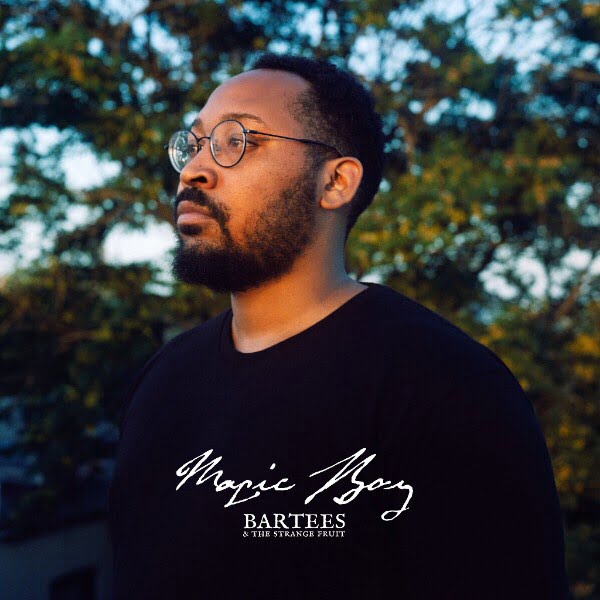 Afropunk is Exclusively Streaming Bartees & The Strange Fruit’s Brand New Album, Magic Boy, Which is Officially Out on Friday.

Watch the video for the second single, “IDK.”

Bartees Cox, a songwriter and guitarist based out of Brooklyn, created Bartees & The Strange Fruit as a conduit to surface stories about people of color. The title of the debut album, Magic Boy, (out December 8, 2017 via Pineapple Record Co.) is inspired by a lyric from the song “Hear My Train A Comin” that goes: “Well, I gotta leave this town, gonna be a Voodoo chile .. and try to be a magic boy.” This particular lyric has always resonated with Bartees since he made the decision to leave his home in rural Oklahoma for the East Coast, a change that is looked back on as being a pivotal moment in his life. This record marks Bartees’ obsession with analog recording, tape machines, space echoes, reel-to-reels and a number of other types of hi-fi recording gear. Each song was recorded to tape, or at least mixed to tape, to give it the warmth of a real performance.

“The “Magic Boy” is how my family sees me,” says Bartees. “Their kid that has made it work in New York, chasing a dream.”

In case you haven’t noticed all of the pumpkin-lined porch steps or the multitude of horror movie marathons on TV, it’s spooky season! Halloween is less than two weeks away, which means hayrides, haunted houses, and, most importantly, FREE CANDY!!! Well, free for cute kids dressed up like Spiderman or Moana. For adults, Halloween means stocking up on the good stuff to avoid a yard full of toilet paper or having your car decorated with egg yolks. Halloween is a candy manufacturer’s Christmas. According to The National Retail Federation, it’s expected that 2.7 billion dollars will be spent on trick-or-treat candy this year. It may seem like a good idea to buy the cheapest bag of candy you can find, however, when November 1st rolls around and you’re left with three pounds of store-brand lollipops none of the trick-or-treaters wanted to take, bargain shopping might be a decision you’ll regret.

If you want to avoid the horror that is too much leftover candy, you’ll have to fork over a a few extra bucks for the good stuff. You may stroll down the candy aisle at the supermarket amidst the plethora of different chocolates, gummies, sours, and sweets, and think to yourself, how do I know which candy to buy? Well, CandyStore.com, is here to help. Over the past 10 years, CandyStore.com has been shipping tons of bulk candy all across the United States and Canada. They compiled 10 years (2007-2016) of sales data for the months leading up to Halloween and put together an interactive map that details the top three most popular Halloween candies for each state, indicated by pounds distributed. Check out the interactive map HERE to become the go-to house for all of the witches, ghosts, and Chewbaccas in town. Or, if you’d rather not have hoards of little vampires and Pokemon running through your yard but still want to please the kiddos, CandyStore.com also has a list of the WORST candies, so you know exactly what not to buy.

CandyStore.com also offers the option of skipping the trip to supermarket all together. Order online in bulk so you can avoid facing the delicious temptation of sugary goodness in candy aisle.