For America’s youth, hearing loss is a growing epidemic. “As many as 16% of teens (ages 12  to 19) have reported some hearing loss that could have been caused by loud noise,” according to the National Institute on Deafness and Other Communication Disorders.

Why does Puro Sound Labs care so much about Noise-Induced Hearing Loss (NIHL)?

In 2014 Puro Sound Labs founder, Dave Russell, learned that his youngest daughter, Niki, had developed Noise-Induced Hearing Loss (NIHL). The doctors told them the culprit was on her head every day…her headphones.

After Niki’s diagnosis, Dave scoured the market, searching for headphones for all ages that would protect against this extremely preventable condition. He couldn’t find one brand of safe headphones that would sound good, look good and be durable enough for a kid’s lifestyle.

So, utilizing a background in the tech industry, Dave made some in 2014 – but not just any headphone – the Puro BT2200 Kids Bluetooth Headphones…the world’s only studio-grade Bluetooth headphone that puts the safety of kid’s ears first. Headquartered in sunny San Diego, California, Puro has dedicated their time and research in designing a product you, your family and your readers will love and enjoy for years to come. Puro’s mission is to protect kids against preventable Noise-Induced Hearing Loss without compromising style or sound…and have them enjoy it at the same time.

Over the past 4 years the BT2200 headphones have earned numerous awards and the highest praise for not only their protection, but also their sound quality. To make an even better kid’s headphone, Puro Sound Labs has recently launched their PuroQuiet Kid’s headphone with Active Noise Cancelling. ANC even further reduces background sounds in noisy environments. Puro has even made the PuroCalm earmuffs, for those times when listeners just want less sound overall.

Puro Sound Labs is now proud to partner with KultureCity, an organization that provides sensory-inclusive spaces and universal accessibility for children with disabilities.

For every pair of PuroCalm’s purchased, Puro Sound will donate a pair to the KultureCity Sensory Inclusive program, allowing individuals with autism and other sensory needs the ability to see and experience all the things the world has to offer without the sensory overload that often comes with the experience. Puro Sound Labs headphones are featured in all of KultureCity’s sensory initiatives, including at over 150 major sports arenas, zoos, schools and theaters, thus enabling autistic individuals a chance to cope with sensory sensitivities that so commonly interfere with their daily lives.

In addition, the partnership will feature a global social campaign and looks to join forces with celebrities, influencers and companies that are equally interesting in shifting  the autism conversation from awareness to acceptance…and provide safe listening devices from Puro Sound Labs to autistic children around the globe.  This first ever, large-scale campaign will represent a positive reflection of autism aimed at gaining acceptance and inclusion within the community at large.

March has been Madness! (In the best of ways)

We’re kiiping busy, and hope you have been too. This year is already flying by and we’ve got so much to share!

Kiip is dedicated to supporting and growing an equal and diverse workforce and we know that means having an open and honest conversation about how we can do better. Take a look at what our leaders here at Kiip have to say about progress in 2018.

&#feff; Kiip Gets Into the Data & Audiences Business

We’ve been hard at work. Since we launched our Moments Table, many brands have asked if they can use our data more broadly. We finally launched our audiences into (initially) LiveRamp Data Store and now I am happy to report that you can buy moments audiences decoupled with our media.

On top of this, we rounded out our data suite with our Surveys product. Too often as marketers we are faced with limited 3rd party data options (largely cookie based or too probabilistic). We decided to use our mobile-first positioning and engagement unit in our ads to create a survey product where the marketer can simply ask the consumer (millions of them). With these survey responses we can create seed audiences activated on Kiip (or elsewhere as aforementioned) or simply qualify the success of your campaign. The possibilities are endless.

To help further hammer home the point of why we went into the data business, we put together some helpful content. An interesting tidbit: the VP of Netflix started quite a stir in 2016 when he suggested that demographic data was a thing of the past, or rather headed to the trash. I believe that marketing is heading from a segment-based approach to a signal-based approach. Here’s a post from one of our brilliant strategist Lauren, on how best to ensure that your audience data is used effectively and sourced transparently.

Okay so now you’ve read all about how to avoid the pitfalls (in the post linked above), are you ready to talk strategy and leave generic data in the past? Schedule a complimentary session today and learn more about how our audience targeting stands out from the crowd.

Every month we release mobile app behavior trends called M.I.C. drops. These help our media buying customers to get ahead of trends and know how to buy more effectively based on what people are going to be spending time doing. The March M.I.C. drop stats are in and it’s sunny with a chance of 2 in 3 teens working this summer. This summer polls 55% of teens working and earning over $1K. We’ve collected the data, now you can make accurate predictions on what they’ll be spending that money on and when. See for yourself how best to reach a teen audience this summer!

The Center for Third Space Thinking, a new, innovative center dedicated to equipping businesses and nonprofit organizations with the essential soft skills needed to thrive in a communication-at-the-center world, has been established and will be based at the USC Annenberg School for Communication and Journalism. The former dean of the Annenberg School, Ernest J. Wilson lll, founded the center, and the Annenberg Foundation has provided a $1.5 million launch grant to open it.

To meet the challenges and seize the opportunities of today’s complex and digitally disrupted business environment, the Center for Third Space Thinking is helping people and organizations solve complex problems through a new communications-driven methodology. The new methodology, built around the five core competencies of adaptability, cultural competency, empathy, intellectual curiosity and 360-degree thinking to approach problems from multiple perspectives, will be applied to the center’s work in three areas — leadership development, education and community engagement.

Wilson says the new center should become the go-to resource for anyone interested in using soft skills to improve individual and organizational performance in a period of high-velocity and widespread change.

“We are creating a novel third space that relies on communication-centric strategic thinking and its critical soft skills that are in such high demand, but seriously under supplied in the market. We’re going to fix that,” Wilson said.

The Annenberg Foundation grant will help launch the center’s educational leadership and community empowerment programs and share the center’s knowledge with diverse, underserved communities to improve their access to soft skills development.

“We support this powerful vision for educating a cadre of Third Space Thinkers,” said Wallis Annenberg, USC trustee and chairman of the board, president and CEO of the Annenberg Foundation. “We believe soft skills are imperative in our quickly changing world and are excited to support the center’s leadership programs.”

“We are grateful to the Annenberg Foundation for providing the Center for Third Space Thinking with the funding we need to launch our important work,” said Shellee Smith, the center’s executive director. “With this first grant, we now have the ability to transform people and organizations with a new, fresh, communications approach to strategic thinking and problem solving.  We will be looking for partnerships and further resources to be able to serve the maximum amount of people in order to have a deep and wide impact.”

The center hosted its first two-day leadership development Boot Camp for high-potential executives on the USC campus on October 5 and 6. A total of 25 executives from a diverse set of organizations, including Google, IBM, Western Union, United Airlines, AECOM, Southern California Edison, Quest Diagnostics and the Annenberg Foundation attended the highly immersive Boot Camp that helped the participants gain critical soft skills and become more effective problem solvers. The center’s next Boot Camp is scheduled for April 4-6, 2018.

Interscope Records recording artist Arin Ray releases his second single, “Communication,” which is now available at all digital retailers. The Cincinnati crooner nabs platinum hit-maker DRAM for his new record about love. “Communication” finds newcomer Arin Ray singing over a pop-leaning R&B beat courtesy of producer Childish Major (Future/J. Cole.). The message which strings together his list of promises to his new lover is tightly held together by soothing guitar baselines and drumkits. The singer/songwriter pens, “I know better than to cheat / you deserve the best from me.”

The Midwest-born singer released his YG assisted track “We Ain’t Homies,” in December and joined H.E.R on The Lights On tour. The upcoming album has recruited some heavy hitting producers such as Terrace Martin (Kendrick Lamar), Nez and Rio (A$AP Rocky/ScHoolboy Q). Last year proved to be a promising year for the young talent who shows no signs of stopping anytime soon. You can catch Arin Ray performing Valentine’s Day in Los Angeles with Victoria Monet.

Ray was born with music in his blood. His father was the drummer for early ‘90s new jack swing groups New Edition, Bell Biv DeVoe, and the Babyface-fronted After 7, and his aunt sang background vocals for Marvin Gaye. A week after graduating high school, Ray moved to Los Angeles, where he hooked up with production team the Underdogs, who invited him to work in their studio. Over the course of the next few years, Ray racked up writing credits on songs for Chris Brown, Nicki Minaj, Rick Ross, John Legend, Jason Derulo, and K. Michelle while gearing up to make his own music. 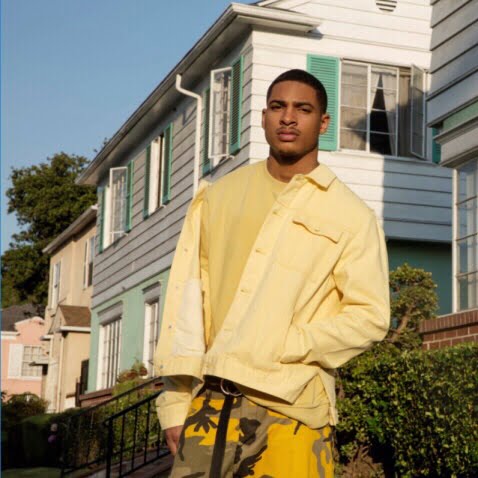