Legends, icons, trailblazers, pioneers, innovators and trendsetters are just a few words often used to describe this group. From Grammys to MTV Video Awards, they have won them all. Whether it’s the top of the charts or on stages at sold out coliseums across the country, they have done it all. 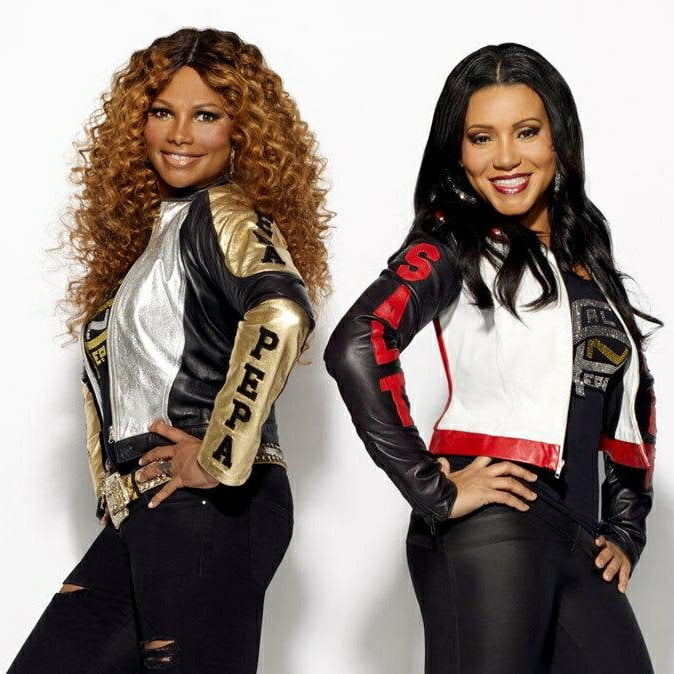 As the first ever female rap crew, Salt-N-Pepa, broke barriers and opened doors wide open that were once closed to women in hip-hop. They gave women a voice in a male dominated industry and transformed the way the music world saw women forever. With the hit songs “Push It,” “Tramp,””Shake Your Thang,” “Shoop” and “Whatta Man,” Salt-N-Pepa would defy everyone’s expectations and catapult hip-hop to new levels

AVAILABLE FOR SELECT AND ROUTED DATES

They are, undoubtedly, the group that changed the face of hip-hop as we know it. They also gave females across the globe a voice within their communities and the music industry as a whole. They are Salt-N-Pepa.

Twenty five years into their career, they continue to aspire to great heights with history making firsts. Not only were they the first female rappers to receive a Grammy, but they have also now teamed up with media mogul Oprah Winfrey and her talk show to become the one of the few select rappers to have the distinct honor to ever perform on The Oprah Winfrey Show during its history-making run.

Iconic figures in history that revolutionized, like none other, their respective industries, Oprah Winfrey has invited female rap icons Salt-N-Pepa to perform on a very special episode of The Oprah Winfrey Show on Wednesday April 13th. The show is aptly titled, “Rock Goddesses of the 70s and 80s”. Among other music icons to be featured on the show are Sheryl Crow, Stevie Nicks, Sister Sledge and Miley Cyrus. Salt-N-Pepa will do a medley of their greatest hits as well as a snippet of their most recent single “Hands Up”, to be released on iTunes within the coming weeks. Watch the preview.

Salt-N-Pepa wraps a 25 city tour across the country and continue to celebrate 25 years since the release of their critically acclaimed multi-platinum selling album, Hot, Cool & Vicious, all as media mogul Oprah Winfrey celebrates her triumphant 25th and final year of presenting The Oprah Winfrey Show to millions around the globe.

Legends, icons, trailblazers, pioneers, innovators and trendsetters are just a few words often used to describe this group. From Grammys to MTV Video Awards, they have won them all. Whether it’s the top of the charts or on stages at sold out coliseums across the country, they have done it all. They are Grammy Award winning group, Salt-N-Pepa, which consists of Cheryl James and Sandy Denton (“Salt” and “Pepa”, respectively), and Deidre “Dee Dee” Roper (DJ Spinderella).

As the first ever female rap crew, Salt-N-Pepa, broke barriers and opened doors wide open that were once closed to women in hip-hop. They gave women a voice in a male dominated industry and transformed the way the music world saw women forever. With the hit songs “Push It,” “Tramp,””Shake Your Thang,” “Shoop” and “Whatta Man,” Salt-N-Pepa would defy everyone’s expectations and catapult hip-hop to new levels

Salt-N-Pepa have commissioned some of their closest friends and some of hip-hop’s greatest artists to join forces with them for the 2011 installment of Salt-N-Pepa’s “Legends of Hip-Hop Tour.” The VH1 reality show, “The Salt-N-Pepa Show,” officially reunited the ladies and made them realize that people really wanted to see them together again. After that, they decided to settle their differences and make this tour and several new ventures happen. Salt-N-Pepa’s “Legends of Hip-Hop Tour” is the first of many for them.

Artists who will be coming together with Salt-N-Pepa on stages across the country include Kurtis Blow, Doug E. Fresh, Whodini, Kool Moe Dee, Slick Rick, MC Lyte, Rob Base, Naughty By Nature and Biz Markie. The tour kicks off February 4th in Cleveland, OH at the Wolstein Center. Each city on the tour will have different artist line-ups. Select cities on the tour are on sale now. For more information on tickets and artists see Ticketmaster or Legends of Hip Hop.

From all of Salt-N-Pepa’s greatest hits to “Freaks Come Out At Night,” by Whodini, “The Breaks,” from Kurtis Blow, “The Show” from Doug E. Fresh, “Children’s Story” from Slick Rick,” “How Ya Like Me Now” from Kool Moe Dee, “Cha, Cha, Cha” from MC Lyte, “It Takes Two” from Rob Base, “O.P.P.” from Naughty By Nature, and “Just a Friend” from Biz Markie, audiences will be able to rhyme with their favorite rappers and relive it all up close and in person for one night. According to Salt-N-Pepa, The “Legends of Hip-Hop Tour” will be a night of non-stop music and nostalgia.

“We encounter so many people who said they long to hear and see us again in concert,” said Salt. “People really miss seeing us out there. They come up to us and mention that our music touched them, brings back so many great memories for them and helped them just see life differently.”

Salt-N-Pepa will headline and present the “Legends of Hip-Hop Tour.” Last year a smaller version of the tour saw unprecedented success. This time around, more dates have been added to the trek across the country and no expenses have been spared on the production value of the tour in an effort to give their fans more of what they miss from the “LIVE” music and rap scene.

“Last year, the response was incredible. From Atlanta to DC, we sold out each date,” said Pepa. “People really want to see us and we really wanted to make this happen for our fans. Also, the timing was just right and it just all came together perfectly.”

Now, on the 25th anniversary of Salt-N-Pepa’s first album release, 1986’s Hot, Cool, & Vicious, which featured the hit song, “Push It,” this tour has an extra special added value. Salt-N-Pepa are still at it a quarter of a century later introducing themselves to a new generation of fans and still making those that grew up listening to their music continue to feel the excitement and energy that only SNP can provide.

“We know that the tour happens to be occurring during a milestone in our musical career, but more importantly it gives us an opportunity to reconnect with our fans and our friends in the business,” said Salt. “When you have a chance to see people again that you’ve met along the way and hear their stories again, there’s nothing like it in the world.”

Outside of the realm of being legends of the hip hop game, Grammy Award winning group, Salt-N-Pepa can also be called “revolutionaries of rap” and “groundbreakers of the game.” Not only using their mic as a means to make big beats and heads bob, but they also used it as means to get out messages of importance and relevance. From safe sex to independence and respecting yourself as a woman, Salt-N-Pepa saw the urgency and importance of empowering the female race and using their voices through the mic to influence millions with their music.

No matter what you call them, Salt-N-Pepa, along with the other artists on the tour, revolutionized a people, changed a culture and totally revamped the way the world saw music forever. You can’t list or mention the top rap songs of all time without their hit songs showing up. And you can’t talk about music history without mentioning their names. Their contributions to a culture and to the world of hip hop has influenced the landscape and look of music as we know it today.

“Recently, we had the opportunity to see Justin Timberlake and Christina Aguilera at events where we were performing. One of the first things they said to us was ‘we are such big fans; we absolutely love you and your music,’ ” said Pepa. It just blows our mind when we see the impact that we’ve had throughout the years on such huge, well respected mega stars like them. It’s both humbling and an honor all at the same time. It just goes to show us that superstars appreciate our music and we have genuinely impacted and touched their lives and continue to touch the lives of millions of our fans.”

Employers complain that graduates are not ready for work. Stanford University studies indicate students are overloaded and under-prepared. So exactly what should we teach young people in an age where Dr. Google has an answer for everything; humans are living longer; the traditional professions disappear while new ones are created; international mobility is drastically increasing population diversity; terrorism, environmental threats and inequality need our collective attention; and robots and gene editing are coming, requiring us to re-examine the very core of what it means to be human?

The Global Teacher Bloggers are pioneers and innovators in fields such as technology integration, mathematics coaching, special needs education, science instruction, and gender equity. C.M. Rubin Founder of CMRubinWorld asked them to reflect on these questions: Do you believe curriculum needs to be more relevant for a 21st century world? If you had the power to change the school curriculum, what would you change?

“We need to develop a generation of critical thinkers, collaborators, communicators, environmentalists and ethical IT users,” writes Rashmi Kathuria in India. “The content of the news in the last few months, and indeed years, provides clear and loud evidence for the fact that our education system is failing,” notes Miriam Mason-Sesay, who believes “division, hatred and bigoted fearfulness are fostered seemingly unchallenged, and our education system has not prepared our youngsters to evaluate the veracity of so many claims.” Craig Kemp in Singapore wants “more emphasis on lifelong learning skills than on curriculum content,” and Elisa Guerra Cruz’s curriculum would be focused on “passion projects, aimed at gaining knowledge and abilities, but also at discovering whatever fires a student’s heart,”

CMRubinWorld launched in 2010 to explore what kind of education would prepare students to succeed in a rapidly changing globalized world. Its award-winning series, The Global Search for Education, is a highly regarded trailblazer in the renaissance of 21st century education, and occupies a widely respected place in the pulse of key issues facing every nation and the collective future of all children. It connects today’s top thought leaders with a diverse global audience of parents, students and educators. Its highly readable platform allows for discourse concerning our highest ideals and the sustainable solutions we must engineer to achieve them. C. M. Rubin has produced hundreds of interviews and articles discussing an extensive array of topics under a singular vision: when it comes to the world of children, there is always more work to be done.

For more information on CMRubinWorld