Oliver Peoples and Fai Khadra collaborated to launch an exclusive range of sunglasses that fuses the design aesthetics of Oliver Peoples with the influential mindset of Fai. Fai Khadra is a multidisciplinary creative who has built a strong profile in the design world, captivating an audience of musicians, luxury brands, and galleries across the globe. His cultural relevance and innovative perspective bring an impactful, avant-garde point of view to the collaboration.

The event was creatively directed by Fai. He conceptualized every element of the evening from the custom-built layout, from the original table and bar set-up to the several course menu. Overall, Fai Khadra’s goal was to create a holistic aesthetic designed for his peers.

“We are thrilled to collaborate with Fai Khadra. Fai will become a leader in the creative space of design and brought a clear vision to the collaboration. As a brand, Oliver Peoples has always been defined by vintage-inspired details made for the modern wearer. Fai’s innovative creative direction aligned with our aesthetic seamlessly,” said Rocco Basilico (CEO).

Oliver Peoples was founded in 1987 with the opening of its first boutique on the iconic Sunset Strip. The frames were inspired by an estate collection of vintage American made eyewear purchased by the Founders of the brand in the late 1980s. This vintage aesthetic, along with the unique culture of Los Angeles, elements of fashion, film, art, music, and the Southern California lifestyle, remains at the core of the brand’s DNA and serves as inspiration for designs with global appeal. Oliver Peoples eyewear is hand-crafted of the finest quality materials, with a focus on exclusive product details and superior lens technology.

NBC and E! announced that entrepreneur, fashion and beauty mogul Kim Kardashian West will receive the “Fashion Icon Award” at the 2021 “People’s Choice Awards.” Kardashian West will be honored for her keen fashion sense, her unprecedented entrepreneurial success, and single-handedly transforming the fashion industry through her innovative designs and trend-setting style over the past decade. The 2021 “People’s Choice Awards” will air simultaneously on both NBC and E! on Tuesday, December 7 at 9pm ET/PT from the Barker Hangar in Santa Monica, CA.

“For nearly two decades, Kim Kardashian West’s style evolution has disrupted and influenced trends on a global level and cemented herself as a force to be reckoned with within the fashion industry” said Jen Neal, Executive Vice President, Entertainment Live Events, Specials & E! News, NBCUniversal Entertainment Television and Streaming. “For being a cultural inspiration, trailblazer and so much more, we can’t wait to honor Kim with this year’s ‘People’s Fashion Icon’ award.”

Entrepreneur, beauty and fashion mogul, and activist Kardashian West was propelled into the spotlight in 2007 following the premiere of the hit E! Entertainment reality series “Keeping Up with the Kardashians,” which celebrated its final season this year after 20 seasons. Today, Kardashian West is among the most-followed celebrities, with social media pages that have over 250 million followers across Facebook, Instagram, TikTok and Twitter.

Kardashian West is renowned in the fashion and beauty industry for her successful business ventures and partnerships. In September 2019, she launched her wildly popular shapewear brand, SKIMS, which was recently valued at over $1 Billion, alongside her beauty brands KKW BEAUTY and KKW Fragrance, which launched in 2017.

Voting for the 2021 “People’s Choice Awards” is now closed. See the full list of all 40 categories and nominees online here.

Today, Justin Roberts drops his new single and video entitled, Way Too Much. It features Justin alongside of influencer Jordyn Woods as well as model Sofia Jamora. In the video, the trio plays life-sized dolls being assembled and packaged in a toy factory.

DJ Khaled opened up for the Carters alongside of special guests – Tyga, Tank, YG and Ella Mai. With thousands of screaming fans, Bey and her husband transformed the Rose Bowl into an iconic night to commemorate. Massive LED screens, scores of dancers coupled with pyrotechnics and a state-of-the-art sound system commanded one of the most powerful performances of our lifetime. No wonder the show (earlier this year) has been decorated by both Michelle and Barack Obama’s presence as well as the Kardashians and Oprah. ‘Apeshit‘ off of their latest collaboration Everything is Love was a crowd favorite as Bey spits some serious bars with her epic flow which rivals some of today’s top lyricists.

With less than 8 shows left, you may want to consider making arrangements to see this landmark presentation at on of its last stops.

If anything to witness the bright smiles of 11 high school students who will receive one $100,000 scholarships (per city) from both the BeyGOOD and Shawn Carter foundations.

IT TAKES TO LIVE YOUR BEST LIFE WHEN

E!’s inspirational transformation series “Revenge Body with Khloé Kardashian” returns for season two on Sunday, January 7th at 10 pm ET/PT.   With the help of model and TV personality Khloé Kardashian, author of the New York Times bestselling book “Strong Looks Better Naked,” and her team of fitness, style and beauty experts, participants get the individualized help and encouragement to transform into the person they always dreamed of becoming inside and out.

During this eight-episode season, famous celebs stop by to provide advice and tough love, including pop-culture icon Kim Kardashian West. For a full list of the participants, before photos, and what has inspired them to make a change, please visit http://eonli.ne/2xyk7hC, and for a sneak peek of the series visit: http://eonli.ne/2y9ueKG. This original unscripted series is produced by Khlomoney Entertainment, Rogue Atlas Productions in association with Lionsgate and Ryan Seacrest Productions.  Eli Frankel, Khloé Kardashian, Kris Jenner, Ryan Seacrest and Larissa Matsson serve as executive producers.

This season, 17 men and women commit to a physically and emotionally challenging journey to prove to themselves and those who have been negative forces in their lives that they’re worthy of love and respect. People from all walks of life confront their past, present, and future and reveal what has brought them to this pivotal point in their lives. Whether these men and women have experienced bullying, are trying to mend relationships, or facing any other tough challenges, Khloé – who has overcome her own body issues – is there to help and will meet and check in with the participants throughout their entire process.

Khloé personally gets to know them, finds out what has broken them down, and gives them the tools they need to build themselves back up. From an honorably discharged military veteran struggling with the loss of his identity to newlyweds who want to get healthy before starting a family, each episode will feature everyday people tackling what’s holding them back from being the best they can be. However, even with the best intentions, not every journey is smooth, and not everyone makes it across the finish line.

Aly Ryan was born September 25, 1995 to German parents who at the time were war correspondents in Moscow, Russia.

Traveling from one place to another at a very young age she learned several languages and eventually moved back to Germany where she developed a love for the music her father would play for her. Inspired by songwriters like Bob Dylan, Bruce Springsteen and Pink Floyd, she soon started writing her own music. At the age of 16, shortly after her handicapped brother passed away, she packed her bags and made the move all the way to Los Angeles on her own.

She has since been working with her favorite producers including legends like Babyface, Red One and Toby Gad, recently releasing her debut single ‘No Parachute’ which has been charting on the Soundcloud top 50 pop chart worldwide since its release with currently over 1 million streams.

Head Of Pop at Spotify Mike Biggane included “No Parachute” on New Music Friday U.S and Major tastemaker Ebro Darden from Hot 97 talked about Aly Ryan on Beats 1 (Apple Music’a Radio station) and introduced the single to the world.

Single #2 “Donate A Dollar” was released September 8th, 2017 and is already at over 100k streams on Soundcloud.

This year Aly also opened for infamous Zane Carney ( who is the lead guitarist for John Mayer) at the El Rey theater and she has collaborated with Post Modern Jukebox (youtube cover band with 3 million subscribers and who tours worldwide} on a cover of “Million Reasons” by Lady Gaga which has garnered a lot of attention on Youtube. 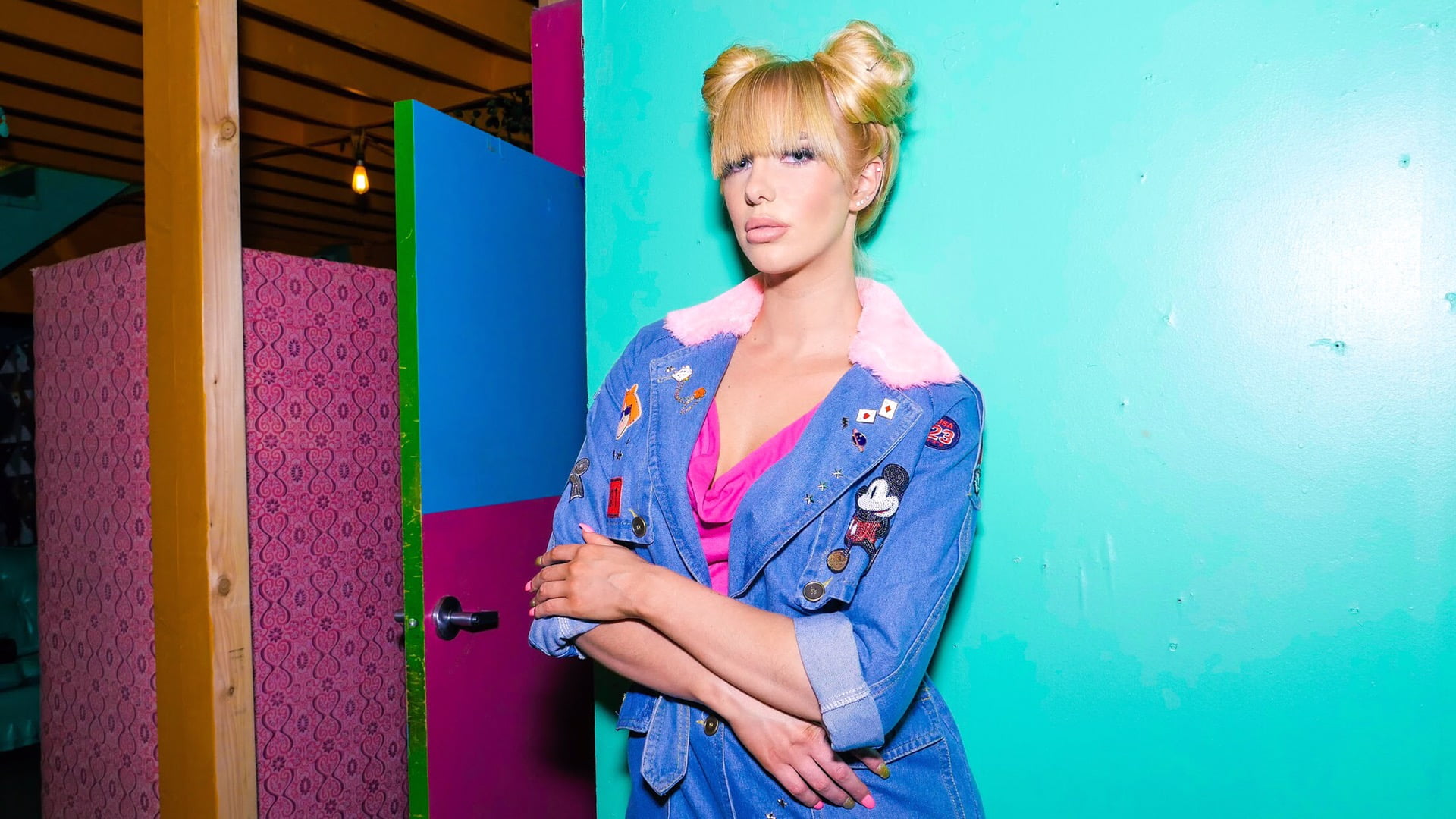 In honor of his birthday, Eric “Eazy-E” Wright, daughter Ebie collaborates with famed photographer Mike Miller to recapture similar photos for both daughter and father to share.

In tribute of what would have been Eazy-E’s 53rd Birthday on September 7th, 2017, Ebie states:

“I usually try to do a tribute to my father on his death anniversary but something about his birthday just seemed more fitting this year. I called on none other than Mike Miller who is responsible for shooting some of my dad’s most classic pictures to help me bring my “Eazy-E inspired” vision to life. Mike is phenomenal and I just felt chills imagining how it was on the days he and my father got out in the streets and got creative together. 22 years later and it still hasn’t gotten any Eazier but today is a celebration … Happy Birthday dad!! I know you’re watching over me and I’ll forever continue to be Ruthless.” – Ebie 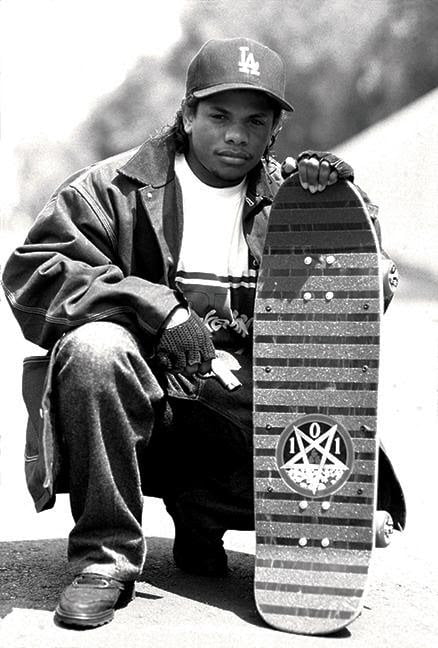 Mike Miller has recently made headlines after allegedly suing The Kardashian Clan: Kylie and Kendall Jenner for the use his photos of Tupac Shakur without his permission.

Mike recently collaborated with Ebie to create an “Eazy-E” inspired photoshoot to pay tribute to the rapper’s birthday. While working with Ebie, Mike shared:

“Wow… Ebie is just awesome. Being a DJ and photographing musicians for 30 years her dad was one of my all-time favorite people to shoot as well as one of my all time favorite rappers. I felt an immediate connection with Ebie, having daughters of my own saddens me that he’s not around to see his grow. We had a blast…. Happy Birthday Eazy.”

In Mike Miller’s book “West Coast Hip-Hop: A History in Pictures”, Mike shared what it was like working with the legendary rapper:

“I consider myself very fortunate to have photographed Eazy, Ice Cube, Dr. Dre, Ren , Yella and Arabian Prince. First time “The Source Magazine” asked me to head out to a Culver City recording studio to shoot NWA. Eazy greeted me and showed me around the studio. Gold and platinum records lined the walls. Eazy played me tracks off the new Album, outing the final touches before it was release. I shot some cool solo images of Eazy outside. There was a giant American Flag blowing in the wind and I photographed him in the afternoon sunlight. Another shoot for Eazy was at Ruthless Records. While waiting for Eazy to arrive I pulled out my skateboard and began skating in the parking lot. Eazy pulled up in his new BMW. He grabbed a deck out of his trunk. The artwork was my friend Natas signature board. We talked skateboarding for a bit, he was really into it. Since I grew up skateboarding and liking NWA, I was stoked. Then we did some photos with his car. It seemed a little boring so I added color filters over my lens. We talked about his new projects and planned some upcoming photo shoots.” 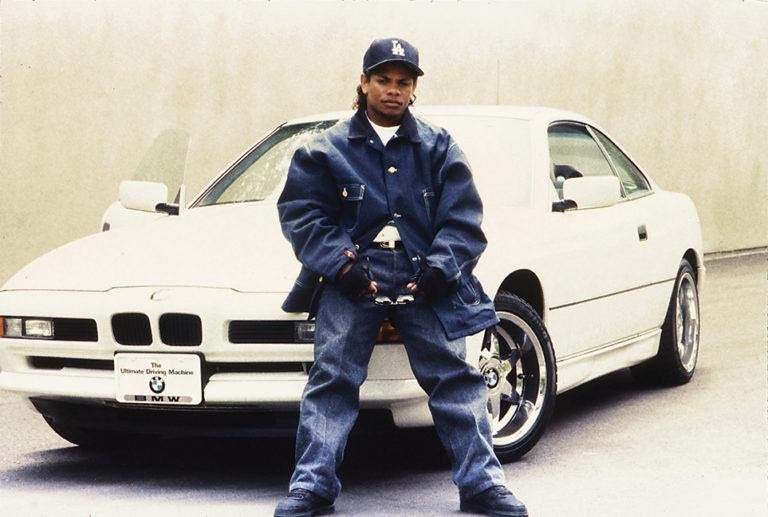