Carmen DeLeon recalls, “Pasado was written with my friends Mauricio, Alejandro, and Andres and was inspired by a breakup with my boyfriend. I was no longer in a relationship with him but was reliving the times I had with him in the past and wondered what it would be like to be with him again. The song tells the story of being okay with missing that person, while reassuring the listener to be with a person that will really love and respect you.”.

Cali y El Dandee add, “We are delighted to have collaborated with Carmen. She has a tremendous voice we can’t wait for the world to see her talent.

Pasado follows DeLeon’s early 2021 single, Cafecito, a bittersweet track that she wrote in memory of her grandfathers, and Juegas, her collaboration with acclaimed Colombian artist FEID. Upon its release, Juegas was featured on numerous NMFs across Spotify and has now amassed more than two million combined global streams. Billboard, which named DeLeon as one of 20 Latina Artists to Discover Before 2020 Ends, noted, “Juegas is a medium-tempo reggae/pop charmer; If this is going to be DeLeon’s brand of pop, we’ll happily take it.”.

Born in Venezuela and now based in Miami, DeLeon has amassed over four million streams since she released her debut single, Volveras less than a year ago. Wonderland noted, “Sharing her struggles with anxiety, the highs and lows of these uncertain times and how it’s okay not to be okay, DeLeon brings her Latin roots to the fore on the laid-back tune, reminding us all exactly why she’s a force to be reckoned with”; Euphoria said, Carmen DeLeon commands the world as her stage with fiery gusto and an undeniable sense of positivity.

Emerging as an inescapable worldwide hit, global superstar, music entrepreneur and Reggaeton icon Daddy Yankee taps none other than Sisqófor the official remix of “Don Don” with Anuel AA and Kendo Kaponi. The song premiered tonight on the Billboard Latin Music Awards with an electric performance from the four artists. The track is now available via Universal Music Group’s Ingrooves Music Group and Republic Records, along with Daddy Yankee’s El Cartel Records.

On the remix, GRAMMY® Award-nominated multiplatinum hip-hop icon Sisqó pulls up with a classic turn-of-the-century verse as quotable as it is nostalgic. Meanwhile, the original “Don Don” has already amassed over 100 million streams and debuted in the Top 10 of the BillboardHot Latin Songs Chart.

Daddy Yankee is widely recognized for leading and elevating Reggaeton into a global cultural and musical phenomenon, which has fueled an explosion in popularity for Latin music around the world. With a career that transcends language, geography and demographics, Daddy Yankee is one of the most popular and followed artists in the world today, with more than 60 million followers across social media and more than 7 billion streams in the last 12 months alone on YouTube, where he is among the Top 20 Global Artists. He has additionally sold more than 17 million albums, charted 50 hit songs on Billboard charts and he is the only Latin Artist with four Spanish-language songs to reach the Top 20 of Billboard’s Hot 100.

Daddy Yankee remains one of the most recognized and influential names in urban music and Latin dance. He was named one of the most influential Hispanics in the world by both CNN and Time Magazine. He has sold over 17 million albums and over 60 million fans combined on his social networks. Daddy Yankee is considered the King of Reggaeton and one of the founders of the global movement. He continues to reign with the global success of “Despacito,” which was named the most streamed song and the most watched video of all time. In 2018, his single “Dura” was the 2nd Most Watched Video in 2018 and in 2019, “Con Calma” marked the number “Most Watched” video globally on YouTube. He was also named Billboard Magazine’s Top Latin Artist of 2017. Other global hits by Daddy Yankee are “Gasolina,” “Rompe,” “Limbo,” and most recently “Que Tire Pa’Lante.”

Global music superstar Janet Jackson is set to debut her new single, “Made for Now,” in collaboration with Daddy Yankee, on the Friday, Aug. 17 telecast of “The Tonight Show Starring Jimmy Fallon.”

The appearance marks Jackson’s first performance on late-night television in 14 years. She last served as musical guest on “Saturday Night Live” in 2004. This will also be Jackson’s first appearance on “The Tonight Show” with Fallon as host.

From Universal Television and Broadway Video, “The Tonight Show Starring Jimmy Fallon” is executive produced by Lorne Michaels and produced by Gerard Bradford, Mike DiCenzo and Katie Hockmeyer. Jamie Granet-Bedermanproduces. “The Tonight Show” tapes before a live studio audience from Studio 6B in 30 Rockefeller Center.

ABOUT JANET JACKSON
Janet Jackson is one of the most influential entertainers of the modern era. Her music has earned her six Grammy Awards, two Emmy Award nominations, a Golden Globe Award and an Academy Award nomination, as well as dozens of American Music Awards, MTV Video Music Awards and Billboard Music Awards. She has also received many accolades as an actress, including an NAACP Best Supporting Actor Award. Jackson is a published author, dancer, businessperson, philanthropist and one of the biggest-selling artists in popular music history. With sales of over 160 million records worldwide, Jackson stands as one of the best-selling artists of all time with a string of hits that have left an indelible impression on pop culture. Her music and artistry have opened doors through which other top artists have followed, many acknowledging her impact on their musical perceptions.

Daddy Yankee remains one of the most recognized and influential names in urban music and Latin dance. He was named one of the most influential Hispanics in the world by both CNN and Time magazine. He has sold more than 17 million albums and has over 60 million fans combined on his social networks. Daddy Yankee is considered the King of Reggaeton and continues to reign with the recent global success of “Despacito,” which was named the most-streamed song and most-watched video of all time, and most recently “Dura,” the second most-watched video in 2018. He was also named Billboard magazine’s Top Latin Artist of 2017. Other global hits by Daddy Yankeeare “Gasolina,” “Rompe” and “Limbo,” among others.

An inimitable curator of unparalleled influence, Poo Bear assembled an event-size cast of guests for what will be the first in a series of Poo Bear Presents releases, happening annually like a birthday. To celebrate the announcement, he serves up the new single ‘Hard 2 Face Reality’ feat. Justin Bieber & Jay Electronica. A blockbuster collaboration, the track showcases the energy and ambition that define Bearthday Music. It also follows up the previously released ‘All We Can Do’ feat. Juanes and ‘Will I See’ feat. Anitta, which has racked up 16.1 million Spotify streams to date. Other cameos include longtime friends and frequent collaborators Jennifer Lopez, Skrillex, Zara Larsson, Ty Dolla $ign, and more. Check out the full tracklisting below.

The record represents an important milestone for Poo Bear. It’s a moment for him to share his artistry and Passion projects among friends as he delivers a unique platform for mega-stars to unleash music off-cycle and a venue to showcase buzzing talent. It’s unlike anything else he’s done or that anybody else has done for that matter.

Emerging in 2001, the four-time GRAMMYAward-winning songwriter and producer began collaborating with the likes of Jill Scott before co-writing “Caught Up”, Usher’s RIAA diamond-certified classic Confessions in 2004. Along the way, everyone from Big Boi, Lupe Fiasco, Chris Brown, Kelly Rowland, and Mariah Carey sought out his pen, prose, and perspective. Introduced to Justin Bieber in 2013, he became a collaborator to the pop icon on Journals, Purpose, co-writing “Where Are Now,” “What Do You Mean?,” “PYD,” “Hold Tight”, “All That Matters”, and more.

Regularly on the Billboard Hot 100 in 2017, Bear’s nimble curiosity and hyper creativity would define a string of genre-busting smashes, including David Guetta’s “2U,” DJ Khaled’s “I’m the One” [feat. Justin Bieber, Quavo, Chance the Rapper, & Lil Wayne], Luis Fonsi’s “Despacito” (Remix) [feat. Daddy Yankee & Justin Bieber] (for which he received a Song of the Year; nom at the GRAMMYS and Songwriter of the Year nom at the Billboard Latin Music Awards), Latin Grammy Award Winning album “Energia” by J Balvin and more. Simultaneously, he dropped his first solo single “Will I See You” [feat. Anitta] and generated over 10 million Spotify streams and 32 million YouTube/VEVO views.

2. Put Your Lovin Where Your Mouth Is (ft. Jennifer Lopez) 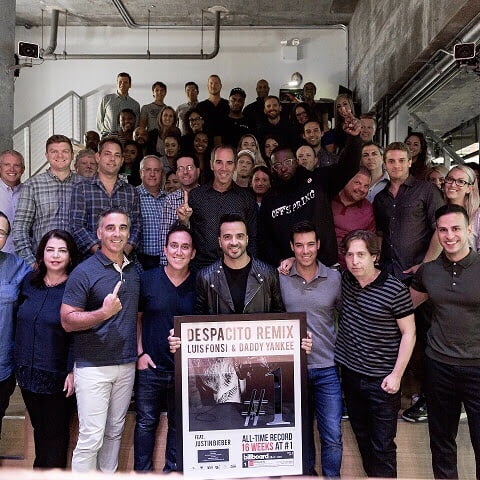 The nominations include “Record of the Year,” “Song of the Year”, and “Pop Duo or Group Performance”. “Despacito” is available via UMLE/RBMG/Def Jam/Republic Records HERE.

In addition, the Republic Records and Universal Music Latin Enterprises teams recently presented LuisFonsi with a #1 plaque for “Despacito” to commemorate tying for most weeks at No. 1 on Billboard’s Hot 100 chart

Merging Latin and American pop like no other, Fonsi indisputably became the biggest crossover superstar of 2017, achieving world domination. With over 4.4 billion YouTube/VEVO views and 1.6 billion cumulative Spotify streams, “Despacito” shattered numerous records throughout the year and made history at every turn. It spent 16 weeks atop the Billboard Hot 100 and remains the “first mostly Spanish-language song to hit #1 on the Billboard Hot 100since 1996.” It soared to #1 on the Mediabase Top 40 chart and the Billboard/BDS Top 40 chart, emerging as “the first predominantly Spanish-language song ever to crown the airplay ranking”—according to Billboard. It also spent 13 weeks at #1 on Shazam, making for the “fourth longest streak in the history of the chart.” Not to mention, it stands out as “the most streamed Spanish song on Spotify” and “YouTube’s #1 Music Debut of 2017.”