Feedbacks from the public

“The fact that his record was co-signed by fellow Memphis stars, Project Pat and Juicy J, is a telling sign that Duke Deuce is truly on the rise.” – HYPEBEAST

“Although it won’t be long until fans move on to the next hottest hip-hop dance, something tells us Duke Deuce has the star power and quality music to ride this moment for a whole lot longer” – COMPLEX

“Already showing the ability to stand out on the timeline, and with the support of Quality Control, Duke might just be ready to take off.” – LYRICAL LEMONADE

“He’s the best parts of every era of Memphis while being in tune with the new generation of rap.” – FLOSS MAG

Duke Deuce drops his hotly anticipated new tape, Memphis Massacre 2 on Quality Control Music/YRN, the follow up to 2018’s Memphis Massacre. Listen to Memphis Massacre 2 HERE. Watch the video for “Crunk Ain’t Dead Remix (feat. Lil Jon, Juicy J, Project Pat)” HERE. Duke has been on a steady rise catching attention for bringing back an era of crunk music that originated in Memphis but became popular out of Atlanta.

Duke grew up around the sound and recalls the likes of Three6Mafia,8Ball, and MJG as influences as well as his father Duke Nitty who produced the Memphis classic “S.O.U.T.H. Parkway” by Gangsta Blac. Duke Nitty is also credited as a producer for few tracks on MM2. The album sees Duke navigate through diverse production and multiple styles like a veteran. An energetic listen over 12 tracks that could only be made by someone that lives and breathes this scene. It’s a true come up for a rising star in rap. Alongside his music, Duke’s unique dance moves are part of what brought him to Quality Control. After Offset saw one of Duke’s videos, he flew him out to the studio to meet and ended up signing him to QC. Gaining co-signs from the whole QC family as well as Cardi B, Duke Deuce is quickly becoming a recognizable name in the space. Late last year Duke released the video for “Crunk Ain’t Dead,” now at over 10 million views on YouTube.

Following its success, hip-hop legends Lil Jon, Juicy J, and Project Pat hopped on a remix that released just last week. Duke commented on working with them, “It was legendary working beside guys I listened to as a kid growing up in Memphis in the studio with my dad.”

There is a new artist on the rise in NYC, and they go by the name of Finding Thomas. Founded by singer/songwriter Thomas Guttman, the band has just released its debut EP, which you can listen to now via HERE.

Distinguished like a Rolex GMT Master II, Thomas Guttman creates music which hovers above genres, marked by a refusal to be pigeonholed. Born and raised in New York City, Finding Thomas performs regularly at downtown clubs like The Standard, East Village, Rockwood Music Hall, The Bitter End, and Bowery Electric, where the fresh sound of the new never fails to surprise. With deep roots in the past, and a sensibility finely to the present, one hears the lingering roar of the previous century colliding with the madness of the current century – yet it’s still fundamentally rooted in bass, guitar, drums, and laced with a biting, lyrical poetry.

Finding Thomas’ EP is cohesive and complex, with each track showcasing a different side of the band. Influences are as varied as they are nuanced, resulting in a timeless suite of songs. The international ensemble of musicians on the recording conjures a surprisingly straight up rock & roll record, with enticing hooks and brutally honest lyrics.

The EP opens with “Better On My Own,” which was recorded during a summer session with Israeli-based producer Eran Tabib. Featuring a tender guitar hook, paired with a tale of a heart shattered into pieces so sharp that they cut, Thomas sings with an intimacy that feels like he’s confiding in the listener.

“It was amazing to be working with Eran in Israel,” said Guttman. “We had been working together for a few years in New York, as a vocal coach. Luckily the stars aligned and we were able to set up a session very last minute in Tel-Aviv . The timing was perfect, as I had just written ‘Better On My Own’ after a rough breakup in December and the fresher the better.”

Watch the music video for “Better On My Own” via YouTube HERE.

Taken as a whole, the EP presents a fresh, personal, authentic new voice, marked by a taut, musical tension – between loose and tight rhythms, romantic and caustic tones, and past and the future sensibilities.

Says Sam Smith, “When I was 17 years old, I did a project on Judy Garland for my Film Studies A-Level. I was immediately immersed into the magic of Judy and her incredibly brave and triumphant story. She has remained as one of the icons of my life. She was one of the bravest humans out there and her vulnerability and honesty in her art still gives me goose bumps like it did the first time.

It was truly an honour to sing with Renée. Nobody could have played Judy as well as Renée, and it is a career highlight for me to be singing with her, and in some small way, with Judy. I hope everyone loves the film as much as I did.” ​

The track coincides with the release of the highly-anticipated feature film in which Zellweger stars as Judy Garland, set for U.S. release on September 27.

JUDY the album features Zellweger’s breath-taking recordings of Judy Garland’s award-winning and most popular numbers, which have become some of the most iconic songs in film and theatre history, including “For Once in My Life”, “Come Rain or Come Shine” and “Over the Rainbow”, all perfectly capturing the moving intensity of Garland’s electrifying performances.

Set for global release on September 27, JUDY the album marks 50 years since Judy Garland’s premature death in 1969, and 80 years since she shot to teenage stardom in The Wizard of Oz in 1939.

JUDY is a Pathé, BBC Films and Ingenious Media Presentation of a Calamity Films Production and is set for a U.S. nationwide theatrical release on September 27.

Chipotle created the “Good Thing” burrito ahead of the release of Zedd’s new single “Good Thing” which features Kehlani and will be released this Friday, September 27.

When Charlie’s Angels hits theaters this November – for the first time in the entire history of the franchise, films and television, directed by a woman, Elizabeth Banks – the new Angels will move to the beat of Ariana Grande, Miley Cyrus, and Lana Del Rey as Republic Records and Sony Pictures Entertainment release their song “Don’t Call Me Angel (Charlie’s Angels)” and the song’s official music video. The track, which features co-writing credits from all three of the artists, was recently featured in the film’s trailer and is the lead single from the upcoming Charlie’s Angels (Original Motion Picture Soundtrack). The soundtrack is co-executive produced by Ariana Grande, Savan Kotecha, and Scooter Braun and will be available November 1, 2019 via Republic Records, two weeks prior to the films November 15, 2019 release.

Pop Singer, Ashlee Keating can currently be heard on multiple streaming services with her new hit single “Bad Mistake,” an empowering up-tempo pop song with an urban melodic vibe that shows off Ashlee’s powerhouse vocals! The song is full of attitude, strength, and swag…

Her music video for “Bad Mistake” which was released on July 31st shows off her powerful vocals and amazing choreography.

A Billboard chart sensation, dancer, songwriter, and actress, Keating is a true multifaceted talent. A southern New Jersey native, she records and performs with some of the biggest names in the business. After opening for Demi Lovato, Keke Palmer, and others, she now headlines her own shows across the USA. Ashlee has worked with some of the industry’s best, including Grammy nominated Sean Douglas; the multi-platinum songwriter and producer who has created hits for such acts as Demi Lovato, Bebe Rexha, Fifth Harmony, Madonna, and Christina Aguilera.

Keating’s last single “Hurt Me So Good” skyrocketed up the Billboard Dance Charts debuting in December 2018 as the #2 breakout single on Billboard for the dance chart and by January 2019 broke the Top 10 peeking at #8. The single has already amassed over 1 million streams and over 300k views on YouTube.

Keating was born on September 9th, 1993 in New Jersey. At the age of six, she portrayed Gretl in the Broadway and national touring production of The Sound of Music. She was featured on the reality competition show “Star Search.” She started her music career with her holiday song “Ice Kingdom” that was elected to be a part of Coca-Cola’s “52 Songs of Happiness” campaign for up-and-coming artists. Only 52 artists from around the world were selected to be a part of the program. “Ice Kingdom” was also on Radio Disney’s top holiday songs list for 2014. Following that in 2015, she was a featured performer on ABC-TV in Philadelphia, PA for the Thanksgiving Day Parade.

The emerging indie rock band, May the Sky [MTS], is based in Dayton, OH. Their exclusive, “Won” from the new EP Discoveries is an anthemic masterpiece which is reminiscent of the iconic Bohemian Rhapsody and some of their mantras. Hard hitting melodies alongside of dramatic drums and rhythmic guitar riffs. Brilliant lyrics coupled with effortless vocals and orchestration make this alternative ensemble ooze marketability. It’s been a long time since we have tripped upon a gem like MTS. Both epic and spellbinding.

With her forthcoming project, “Fever” slated to drop May 17 via 1501 Certified / 300 Entertainment, Megan Thee Stallion is poised to be the next huge hip hop artist.

The Houston based artist has graced every one to watch list you can think of and has gotten praise from Pitchfork, FADER, Billboard, Refinery29 and more and was named First Lady of 300 Entertainment by COMPLEX Magazine.

Her hit single, “Big Ole Freak” blew up alongside her EP, Tina Snow, which debuted at number 11 on the iTunes hip-hop charts and is currently top 20 at Urban Radio. “Big Ole Freak” has accumulated 55MM streams to date with “Freak Nasty” at 14MM streams, and “Sex Talk” at 7MM streams.
With her forthcoming project, “Fever” introducing her college partying persona AKA “Hot Girl Meg”, in the words of FADER, “this summer’s about to be a smokin’ hot one.” 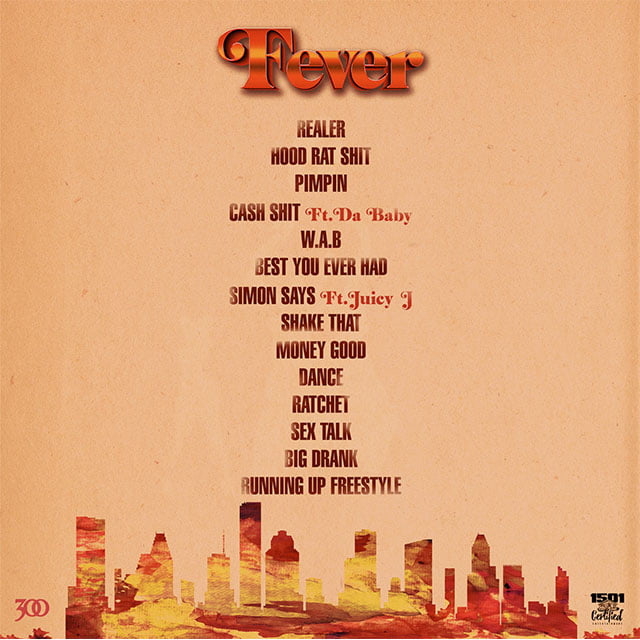 Newcomer and Ohio naJve, Daydream Masi, is increasingly favored for his sensiJve electronic, soul and hip hop-influenced sound. The newest signee to Interscope Records became known for breakout tracks “Marguerite” and “Eucalyptus Tree” which have received 443K and 250K listens, respecJvely on Soundcloud.

In “Nightlight”, Masi croons “But I know that I got you and I know I got some work to do,” over a high- energy variety of beats. Masi conJnues to sing his soulful, emoJonal lyrics, “I’m in hell without you,” with a complex and tropical producJon aiming to be this summer’s passionate, yet energeJc ballad.

He is set forth to release his new project, “Slow Rage”.