“My goal with this new EP was to showcase how much I’ve grown over the years, especially with my lyrics and vocals,” shares guccihighwaters. “I’ve been having so much fun experimenting with new sounds, and I truly believe this is my best music yet. I’m so glad to put it out into the world.”

In late 2021, guccihighwaters holed up in a Los Angeles studio with producer Courtney Ballard [Waterparks]. He absorbed the spirit of diverse inspirations, ranging from Lionel Richie‘s “Dancing on the Ceiling” and the Drive Original Motion Picture Soundtrack to The Weeknd. “Courtney played a bunch of eighties beats for me,” guccihighwaters recalls. “I was into a lot of synth-revival music, so it was cool to hear where it came from. I took the synths and the drum grooves and morphed my style to fit those elements. It felt natural.”

guccihighwaters announced his signing to Public Consumption last month alongside the release of tracks “crash my car” and “devil on my shoulder.” Earlier this month, he formally announced the heartbreak highway EP and unveiled the synth-driven single “the chase” alongside an official music video. Signifying a new era in guccihighwaters’ ever-evolving sound, the EP’s early releases arrived to immediate praise from Alt Press, Consequence, Ones To Watch and more.

guccihighwaters is currently on the road in North America supporting nothing,nowhere. The 25-city trek kicked off last month and will conclude on May 27 in New York, NY at Irving Plaza. The bill also includes Poorstacy, carolesdaughter and Snarls. This fall, guccihighwaters will support nothing,nowhere. on tour in the UK and Europe. A complete list of upcoming tour dates can be found HERE.

heartbreak highway follows guccihighwaters’ 2021 album joke’s on you. Arriving to widespread acclaim, KERRANG! promised, “Whatever genre you label the tunes, the music of guccihighwaters doesn’t joke around when it comes to conveying emotion in its rawest form.” Alt Press lauded the “accomplished artist poised to be a star,” while Ones To Watch proclaimed, “the sounds from singer/producer Morgan Murphy are as raw as it gets.” Billboard applauded standout single “rock bottom” [feat. nothing,nowhere.] as “the highlight of guccihighwaters’ joke’s on you album,” and NME praised the track as “an introspective blend of alt-rock and dark hip-hop flourishes—a marked progression from the online emo scene.”

guccihighwaters glides through a soundscape familiar enough to catch your attention, yet futuristic enough to hold it. The artist, singer, and producer not only blurs the lines between alternative, R&B and hip-hop, but also the boundaries between yesterday, today and tomorrow. Growing up in between Long Beach, NY and Ireland, he maintained a diehard passion for music. After discovering Yung Lean at 18-year-old, he crafted beats all night. A year into this evening ritual, he picked up a microphone and penned lyrics to anesthetize the pain of his first breakup. His first collection of songs comprised the post death EP in 2017. Among many standouts, the fan favorite “i’m so sick of this” gathered 51.6 million Spotify streams and counting. In its wake, he unleashed music at a prolific pace, including multiple EPs and his 2021 full-length debut, joke‘s on you. Along the way, he toured with Lund, Lil Lotus, Smrtdeath, guardin, and nothing,nowhere.

LA-based singer/songwriter and rapper MILES unveiled his new single, “THE INTERNET,” featuring LA by-way-of Toronto pop-punk artist LØLØ. Punctuated by bouncy guitars, breezy beats and a melodic flow, the track is a sunny anthem leading into the summer season. Listen HERE. The accompanying music video is also out and highlights the challenges of dating in the modern era. Of the song’s inspiration, MILES explained with a laugh, “It’s about scrolling online during quarantine, seeing beautiful women, and knowing there’s no chance.” Watch the new visual HERE.

Of the new collaboration, LØLØ added, “I got connected with MILES through my manager and label, and we instantly hit it off in a session. A few weeks later, I saw him tease a song concept on TikTok, and I made a duet to it, without thinking too much into it. He saw it, felt there was something there, and we got back into the studio and actually turned it into a collab.

MILES creates big, high-energy tracks that people can relate to when navigating life and relationships. Early Rising called “MISS INDEPENDENT,” MILES’ first-released single of 2022, a “brilliant feel-good track that continues his exciting trajectory to becoming a household name,” while MUD Magazine praised his “unique sound” that is setting him up to be “one of [their] favorite artists.” MILES is also currently in the studio working on new original music, slated for release this summer. Stay tuned for more to come.

MILES’ story might be almost as wild as his fusion of breezy hip-hop, earthshaking pop, and grimy rock. The St. Louis-born and Los Angeles-based singer and rapper bobs and weaves past genre lines with an unpredictable and undeniable style of his own. Predestining their son for music, mom and dad named him in homage to jazz icon Miles Davis. In turn, MILES cranked his old man’s jazz records as well as Kirk Franklin, Bill Withers, Lauryn Hill, Black Eyed Peas and Lil Wayne. Slowly, but surely, MILES developed a following online before cooking up “WHAT IN TARNATION” (2020) back in St. Louis. Beyond inspiring thousands of TikTok videos, it raked in millions of streams as he signed to Elektra Records. He maintained his momentum with the captivating, high-energy follow-up singles “DESPERADOS” and “MOSH PIT.” His new releases with Elektra kickstart a new era for this exciting artist to watch.

Born and raised in Toronto and now calling LA home, LØLØ has become an undeniable presence in the pop-punk genre. The singer-songwriter has created a striking presence both online and on stage with her effortlessly cool attitude and sharp lyricism. In 2020, LØLØ created a buzz on TikTok where she reimagined music’s biggest hits. Putting her adept lyrical skills to use, she rewrote verses from the opposite perspective of the song’s subject, while still maintaining the original integrity of each song’s tempo and rhyme scheme. Most notably, her take on Taylor Swift‘s “Betty” from “Betty’s Perspective” caught the attention of Swifties and went viral on the platform. In late 2021, LØLØ released her electric EP overkill, which came directly on the heels of her 36-stop US tour with pop-punk titans New Found Glory and Less Than Jake. LØLØ has been compared to Paramore and Avril Lavigne by Billboard, as well as receiving critical acclaim from Paper Magazine, MTV, Kerrang!, American Songwriter, Ones to Watch, Alternative Press, and many more. People Magazine called her an “Emerging Artist making their mark in music” and to date she’s amassed over 35 million streams on Spotify with her numbers continuing to climb exponentially. LØLØ is on the brink of superstardom, so stay tuned as there’s much more to come.

Fueled By Ramen artist nothing,nowhere. has shared a brand-new single, upside down, which is featured on his widely anticipated new album TRAUMA FACTORY due out February 19th. Available now on all streaming platforms, “upside down” pulses with a duality of hypnotic rhythms as nothing,nowhere. traces the slow and painful dissolution of a relationship from his past.

nothing,nowhere. elaborated on the new track remarking, “We’ve all had our fair share of unhealthy relationships. ‘upside down’ is about a lost love and the inability to accept the new and painful circumstances.”

Over the course of 15 tracks, TRAUMA FACTORY cuts deep and finds nothing,nowhere. once again emerging from darkness, shedding external expectation, and moving forward into the glow of pure creation. Whether it be the anesthetized beats and intoxicating lull of “love or chemistry,” the cold piano-laden longing of “crave,” or the emotional immediacy of “upside down,” nothing,nowhere. paints from a wide palette of pain.

“TRAUMA FACTORY is an accumulation of songs written during a confusing time. it is about accepting the present and following your true north through the pain and suffering of human life,” nothing,nowhere. revealed He added, “I wanted to make an album that was truly genreless and inspire others to challenge themselves artistically. I believe the most inspiring art is unpredictable and unrestrictive. to me thatߣs what TRAUMA FACTORY is.”

Last year, The New York Times hailed “DEATH” as a “Scabrous, immensely satisfying emotional expurgation from Joe Mulherin that deploys early Beastie Boys drums and Rage Against the Machine bark-rapping in service of a rap-rock revival bathed in righteousness.”

Last year, he teamed up with Travis Barker for the collaborative EP, bloodlust. bloodlust was highlighted by lead single destruction, which debuted via The FADER with Kerrang! declaring “bloodlust feels like another world. From start to finish it envelops you in its hazy, muted soundscapes.” bloodlust followed a prolific string of singles from nothing,nowhere. –call back, dread, and ornament, and arrived just a year after the release of his acclaimed 2018 LP, ruiner. The sophomore LP features album standouts ruiner and rejecter, which Pigeons&Planes declared, “perfectly exemplify why nothing,nowhere.’s music is so exciting he’s crafted a world of sound that’s both fresh and recognizable.”

The FADER remarked, “The new record is a stimulating blend of singing, hip-hop, and live instrumentation, all fused together with emo and alternative stylings.” nothing,nowhere.’s 2017 debut album, reaper, was met with critical praise led by the singles hopes up (Ft. Dashboard Confessional) and skully.

The album made a massive impact upon its DCD2/Equal Vision release with The New York Times’ Jon Caramanica placing it at #1 on his list of 2017’s best. reaper “synthesizes the second-wave emo of the early to mid-2000s with the rattling hip-hop low end of the last few years,” he wrote. “(reaper) is one of the most promising pop albums of the year,” Rolling Stone declared, “reaper finds him tonally evoking the glory years of 2000s emo-punk without necessarily replicating it.”

nothing,nowhere. is the musical endeavor of Vermont songwriter, singer and guitarist Joe Mulherin. For Mulherin, nothing,nowhere. is about a connection. It’s one he finds with fans around the world, who gather to see him play on tour and to listen to his songs online. It’s that connection that urges the singer to place his fears aside and step onstage each night to share his art. He sees the potential to help, to make a change, however small it may be and that is why he brings his music out of the Vermont wildness. 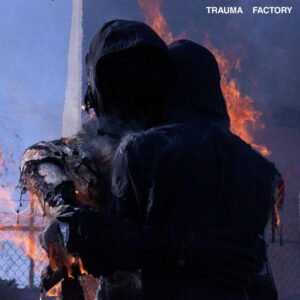