Wednesday, November 11th marks the annual commemoration of veterans in the United States, aptly named Veterans Day. This year, in the unprecedented context of coronavirus, as well as intense political and social strife, the day takes on an additionally sacred context as a reminder of those who have served our country.

Veterans Day originated as “Armistice Day” on November 11, 1919, the first anniversary marking the end of World War I. Congress then passed a resolution in 1926 for an annual observance, with the day becoming a national holiday beginning in 1938. Similar to Memorial Day, which is an annual federal holiday in May, it celebrates veterans of the United States. However, the difference between them is that Veterans Day pays tribute to all American veterans, living and dead. Yet a particular focus is on those veterans still with us, who served their country with honor and distinction whether during war or peacetime.

Several countries have similar days commemorating their veterans that find their root in remembering World War I and World War II on or near November 11th. Canada has Remembrance Day, while Britain has Remembrance Sunday. World War I, as arguably the most brutal conflict in human history on the soldiers, is a devastating reminder of why countries celebrate those who serve.

Veterans Day has been distinctly impacted by the coronavirus, still sweeping the nation especially in the Midwest. As such, celebrations and efforts of remembrance are being affected in large ways. Arlington National Cemetery, used to hosting hundreds of thousands of veterans, their families, and the families of veterans who have passed, has altered its yearly ceremony in context of the current pandemic. For the first time, it will be livestreamed, with certain areas closed off, and embracing social distancing and masked mandates. Furthermore, the beloved observance at Memorial Amphitheater has been closed off to the general public, yet the overall cemetery will remain open.

Yet it is no time to despair or to pause the nation’s respects. There are 18.2 milling living veterans who have served during wartime alive in the United States today, all deserving admiration.

Many businesses and restaurants salute veterans during this day with special deals for those who have served and their families. 360 Magazine thanks all veterans for their service.

Everyone else uses transporters, but not Petersen founding chairman Bruce Meyer. Watch as Bruce and friends take to the streets of Beverly Hills to personally deliver some of his winningest cars to the Petersen Automotive Museum ahead of the opening of “Winning Numbers: The First, The Fastest, The Famous.”

On Saturday, February 23, 2019, the Petersen Automotive Museum opened its newest exhibit featuring 10 groundbreaking race cars, each with a unique story of triumph and victory. Titled “Winning Numbers: The First, The Fastest, The Famous,” the exhibit is comprised of Le Mans winners, land speed record setters, dragsters and road racers from the personal garage of Petersen Founding Chairman Bruce Meyer.

Key vehicles on display include the winningest Ferrari road racer of all time, the 1957 Ferrari 625/250 Testa Rossa, which claimed first prize in more than half of the 50 competitions in which it was raced; the first production 1962 Shelby Cobra, CSX2001; the 1962 Greer Black Prudhomme, which was raced by drag racing legend Don Prudhomme who won 237 of the 241 races in which he piloted the car; the renowned 1952 So-Cal Speed Shop Belly Tank Racer, which was fashioned from a P-38 Lightning fighter belly tank from World War II by hot rod racing icon Alex Xydias; the 1979 Kremer Porsche 935 K3 that took first place overall at Le Mans; and the 1929 Ford “747” Bonneville Racer that Meyer ran 204 mph at Bonneville Salt Flats.

“Affectionately called ‘the car guy’s car guy,’ Bruce Meyer epitomizes true automotive passion,” said Petersen Automotive Museum Executive Director Terry L. Karges. “The charisma with which Bruce shares his passion is what sets him apart. ‘Winning Numbers’ reflects his discerning tastes as a collector and motorsports enthusiast, and we’re proud to share his fervor for the hobby with the community.”

The exhibit’s public opening was preceded by an evening reception and media preview on February 22, 2019. Guests of the exclusive event were treated to passed appetizers by the Petersen’s exclusive catering partner Drago, a full cocktail bar and a Fireside Chat discussion between Meyer and Karges.

The Petersen Automotive Museum Foundation is a non-profit 501(c)(3) charity. The Museum is located at 6060 Wilshire Boulevard (at Fairfax) in Los Angeles, California, 90036. Admission prices are $16 for general admission adults, $14 for seniors, $11 for children ages 4 to 17. Active military with ID, personal care attendants and children under four are admitted free. Museum hours are 10 a.m. to 6 p.m. For general information, call 323-930-CARS or visit www.Petersen.org. 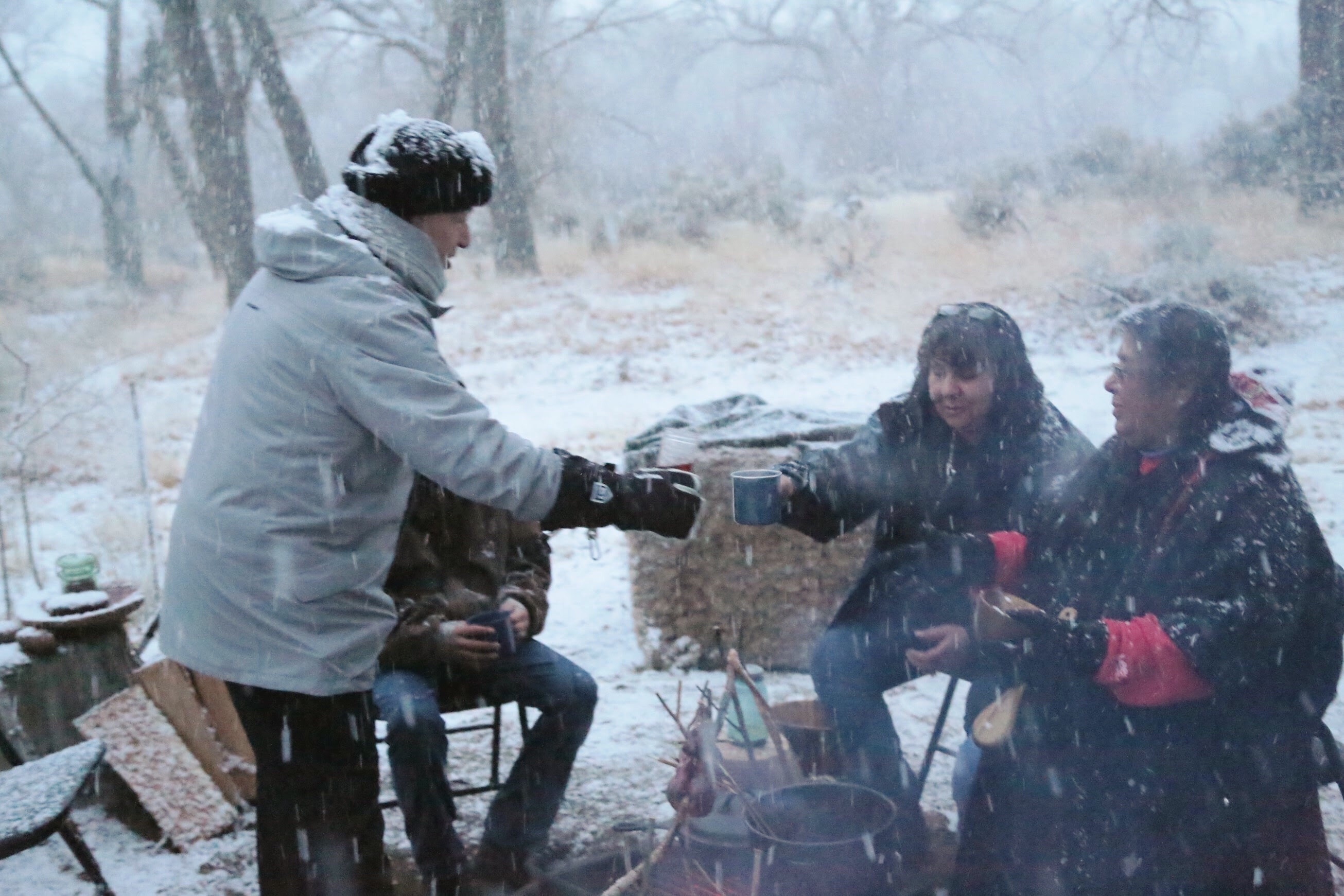 Andrew Zimmern, host of Travel Channel’s “Bizarre Foods,” with Stan Van Vleck at Van Vleck Ranch in northern California (Featured photo); and sharing a cup of tea with Donna Cossette and family near the Pony Express Trail in western Nevada (Above).

Andrew Zimmern continues his epicurean exploration of the food that celebrates cultures and connects communities around the world in the new season of Travel Channel’s “Bizarre Foods” with Andrew Zimmern,premiering on Tuesday, July 3 at 9 p.m. ET/PT. The seven-episode season brings bold new adventures in Zimmern’s global culinary quest along some of history’s most iconic routes, revealing the food and cultural impact on each region. On this leg, he samples deer haggis while traveling in the footsteps of William Wallace in Scotland, chows down on squirrel and pond frogs along the escape route of the Underground Railroad in northern Kentucky and dines on authentic World War II rations on the Battle of the Bulge site in Belgium.

“This season of ‘Bizarre Foods’ offers up some of the best story telling I can remember, with amazing characters who honor their local food customs in unique and delicious ways,” said Zimmern. “Being able to take viewers inside these worlds is what makes this collection of episodes so exciting for me.”

In the season premiere, Zimmern rides the last 200 miles of the Pony Express Trail to its terminus at Sacramento, California, exploring the thrilling mail delivery service that had a short (just 18 months) but profound impact on America. He rides the very same path and enjoys foods that the young riders would have eaten, like son-of-a-gun-stew, fire-roasted duck hearts, boiled elk tongue and pine nut soup. He also discovers fresh foods created by this land’s new generation, including sturgeon skin chicharron and cowboy sushi (wagyu beef filet over vinegar-seasoned rice).

A four-times James Beard Award-winning TV personality, chef, writer and teacher, Andrew Zimmern is regarded as one of the most versatile and knowledgeable personalities in the food world.

For virtual and active travelers who want to go on a thrilling quest; taste other cultures; enjoy the mystery of the unexplored; get a dose of epic adventure or a splash of wacky fun; there is no better daily escape than Travel Channel. Reaching more than 82 million U.S. cable homes, Travel Channel is the world’s leading travel media brand. Fans also can visit Travel Channel for more information or interact with other fans through Facebook, Twitter, Pinterest and Instagram. Travel Channel is owned by Discovery, Inc., a global leader in real life entertainment whose portfolio also includes Discovery Channel, HGTV, Food Network, TLC, Investigation Discovery and OWN: Oprah Winfrey Network.

Following an extraordinary immersive performance at Glastonbury, The Bomb, will debut on Netflix, August 1. New York York was first and unforgettable, Berlin was timely and now, we write this after a mesmerizing showcase of The Bomb at the 2017 Glastonbury Festival.

With support and technical guidance, Glastonbury built massive 360 degree screens out in the open fields of Somerset. The Acid played three powerful shows over the festival and the audience reacted with open jaws.

Now, thanks to the continued support of our partners, we are thrilled to share The Bomb, with audiences worldwide on Netflix.

There, the film will join classics like Dr. Strangelove and Atomic Cafe, iconic reminders of what nuclear weapons can do to our society and tools to inspire public interest.

Through this new platform, The Bomb, will engage people across the globe, reaching outside of the city center and away from technology hubs, broadening the network of those aware of the threat of nuclear weapons and deepening the conversation throughout society.