10 Foreign Films with the Most Unforgettable Love Stories

I have two loves – literature and film. The most powerful love stories jump off the pages or off the screen, narrating different types of love turmoil, journeying through danger and obstacles to find love. The best love stories occur when love triumphs over evil.

In the past twenty years, I have taught film through my NGO at the United Nations and at New York University. It is a love story that captures my students the most. Their 10 favorite love stories in foreign films deceit different ways of loving, but they all try to overcome these obstacles to find it. Although they may not always get their happy ending, it’s always worth the risk:

1.     JOJO RABBIT – (New Zealand) 2019, director Taika Waititi. During World War ll, ten-year-old Jojo is being brainwashed as a Hitler Youth. Strangely, his mother allows this, for it is her only way to protect him. We see how deeply a mother loves her son as she prepares him to be independent. Simultaneously, the director expresses his love for the future of children to do what’s right.

2.     HONEYLAND – (Republic of Northern Macedonia) 2019, directors Tamara Kotevska and Ljubomir Stefanov. Nominated for an Oscar for Best Documentary and Best Feature Film, this story recreates a Paradise Lost and its destruction by a greedy man. Love for beauty and nature, and the desire to recapture it, is represented by honey – becoming extinct – and man’s inhumanity to lose it.

3.     NEVER LOOK AWAY – (Germany) 2018, director Florian Henckel von Donnersmarck. Based on the life of the famous painter, Gerhard Richter, the director recreates the artist’s search for Truth. It is only through love for Art that the artist can find peace. It is this tumultuous search that pushes him/her to create.

4.     CAPERNAUM – (Lebanon) 2018, director Nadine Labaki. Lost children, abandoned, hungry, and forced to go against their conscience, are victims of war-torn Lebanon and Syria. The director opens her heart by using her hand-held camera to capture how children suffer in their struggle to survive. It is through her love for these children that we understand and want to help.

5.     FACES PLACES – (France) 2017, directors Agnes Varda and JR. At 89-years-old and one year before her death, famed filmmaker, Agnes Varda embarks on a road trip to show her appreciation to the people of France. As a token of her deep love, she offers them a new type of art – photos of themselves – while she is making a film of their acceptance. Photography mixes with cinematography, the moving image fuses with still art, to show the director’s love for people and give them Art.

6.     LION – (India/ Australia) 2016, director Garth Davis. The true story of 5-year-old Saroo, who gets lost on a train in India and cannot communicate in a different dialect to return home. He is placed in an orphanage and adopted by a couple from Tasmania, Australia. Twenty-five years later, his obsession to find his biological mother is proof of his filial love.

7.     TONI ERDMANN – (Germany / Romania) 2016, director Maren Ade. A father loves his ambitious, modern daughter and wants to help her understand what happiness and love are. But the generational gap proves to be stronger than his quest. Despite his struggles and sacrifices, she answers when she sings Whitney Houston’s song, “Learning to love yourself is the greatest love of all.”

8.     PHOENIX – (Germany) 2014, director Christian Petzold. Nelly survives World War II because she is obsessed at Auschwitz to be loved again by the man she loves. She does return to him but disfigured, and he does not recognize her. Deceitfully, he schemes to help her survive the traumas of her past. But as she learns the truth, will her love forgive him?

9.     IDA – (Poland) 2013, director Pawel Pawlikowski. Ida embarks on a spiritual journey to choose between a life of love and family, or God and religion. As she voyages toward the answer, she learns about her history and what the material world can offer. But she keeps repeating, “And then?” She realizes it is love for God and the spirit that can offer her the truest love.

10.  CASABLANCA – (USA/ Morocco) 1942, director Michael Curtiz. This is the best love story of all. For those who will see this film for the first time, I am jealous. This is an American movie made in Morocco with an anti-Hollywood ending. It shows and answers what is true love? What we see on the screen is a love that hurts – for all of us. And yet, love must be experienced, and this film must be seen!

Roberta Seret, Ph.D., is the director of Advanced English and Film at the United Nations for the Hospitality Committee and Founder of the NGO at the United Nations, International Cinema Education. She is the author of the Transylvanian Trilogy, with Love Odyssey releasing March 23, 2021. Visit her website for more information.

Connecticut-born sculptor Tom Burr’s expansive body of portraiture takes a different approach to the relationship between the built environment, material, subjectivity, and historical personalities. Coinciding with the 50th anniversary of the Stonewall Riots and the museum’s presentation of two other portrait centered exhibitions, Tom Burr / MATRIX 182 / Hinged Figures unites a selection of the artist’s reclining figures, several of which are portraits of individuals from queer history and American Modernism. Burr began the series in 2005, and MATRIX 182 constitutes the largest museum presentation of the reclining figures to date. The sculptures will be shown both within the MATRIX Gallery and around the museum, in dialogue with specific artists and architectural spaces, and also at the Austin House.

“I wanted to see the figures spread throughout the different spaces in the museum–spaces that resonate with the history of 20th-century art being shown–but also in other, less expected settings, such as Chick Austin’s house,” says Tom Burr. “I wanted to create a constellation of figures and sites that would engage, in a sense, the museum and the house as a total stage set.”

Burr’s sculptures combine Minimalist forms with figures and material attributes, such as books, magazine pages, notecards, tinsel, and a Chanel dress. He is interested in the way certain figures shape and are shaped by the spaces they inhabit. In this MATRIX project, Burr directly addresses the Wadsworth’s prominent role in the history of Modernism in several portrait subjects, including former director A. Everett ‘Chick’ Austin, and two creatives, writer Gertrude Stein and composer Virgil Thomson. They were commissioned in the 1930s to make the opera Four Saints in Three Acts to inaugurate the newly completed Avery Memorial and its purpose-built theater. Two 33 rpm records of the opera and are featured in Burr’s Chicks, 2008

One foot in the grave (reclining), 2010 references photographer Robert Mapplethorpe whose career is embedded in the Wadsworth’s history.A MATRIX artist in 1984, Mapplethorpe’s work has also been presented in exhibitions in 1990, 2015 and will be included in Be Seen: Portrait Photography Since Stonewall opening June 22, 2019. Burr’s portrait of Mapplethorpe (below) includes a postcard featuring one of the photographer’s black-and-white flower images and a small pile of soil evoking a meditation on illness and the AIDS epidemic.

“Tom Burr’s continual engagement with queer historical figures and modernism identified him as a strong choice for an expanded MATRIX project for the summer of Stonewall 50,” says Patricia Hickson, Emily Hall Tremaine Curator of Contemporary Art at the Wadsworth. “Although most of these sculptures were made some years ago, the personas

they evoke resonate with the Wadsworth’s history in terms of collections, exhibitions, and programming. Burr has remarked on the noteworthy inversion of these departed figures’ ‘return’ to the Wadsworth as memories in the form of sculptures.”

Tom Burr / MATRIX 182 / Hinged Figures opens during Art After Dark, Thursday, June 6 from 5-8pm, and the artist will give a Gallery Talk at 6:30pm. A docent-led Art In Focus tour of Tom Burr’s Chicks (2008) will take place on Friday, August 21 at noon. Curator Patricia Hickson will lead a Gallery Talk on Thursday, August 29 at noon.

Inaugurated in 1975, MATRIX is the Wadsworth’s groundbreaking contemporary art exhibition series featuring works by artists from around the world. From its inception, MATRIX has been a forum for art that is challenging, current, and sometimes controversial. Through clear explanation and thoughtful engagement with the viewer, MATRIX exhibitions call into question preconceptions about art and increase understanding of its possibilities. Many MATRIX artists, such as Christo, Sol LeWitt, Gerhard Richter, Cindy Sherman, Andy Warhol, and Carrie Mae Weems are now considered seminal figures in contemporary art.

MATRIX 182 is generously supported by the Howard Fromson Exhibition Fund.

I spent the first eighteen years of my life growing up on the south shore of Oahu. I learned how to surf at age three, feeling grounded by the constant blue horizon and the majestic Hawaiian mountains. Growing up on the most isolated land mass in the world I paid attention to every brilliant piece of nature unfolding before me with the changing tradewinds. I often use the colors of my childhood, lush green, cobalt blue, tangerine, and magenta as building blocks for my paintings. In Hawaii, the people, language, food, and customs are a mixture of the many cultures of people who came to the islands – Samoan, Native Hawaiian, Japanese, Chinese, English, Korean, and Filipino. Beauty comes in unexpected forms and from many points of view.

When I see something beautiful that I do not fully understand, I have an impulse to paint it. What I’m physically attracted to may be the sherbert clouds resting on steep Hawaiian mountains in Paka Nahele , the porcelain skin of a friend in Amber , or the ephemeral floating tentacles of a jellyfish in Float . I find something physically stunning because there is a certain spiritual element beckoning me to search for the sublime.

Heaven is that feeling when just for a second you have a glimpse past our physical world and into something else. Just after the sun has gone down in Makapu’u , the ocean becomes mercurial. In Erin Surfs , my sister effortlessly dances upon the waves and becomes one with the ocean.

In Float I explored a recurring dream of floating through nebulas in space with no gravity. Weightlessness, a feeling similar to the buoyancy when swimming in the ocean, flooded my heart with a sense of peace. I sought to capture that by making a photo collage of nebulas, jellyfish, and synapse firing. I painted loosely from the collage, pouring paint from one canvas onto another. Every time I liked an effect, I replicated it and enhanced it by adding drop shadows and pops of color. I painted over the parts that felt unnecessary and moved forward adding, subtracting, and refining my vision.

I enjoy painting large pieces because they are challenging and take the movement of the entire body- the feet, the arms, and the core. Painting large makes me feel like I’m dancing with a partner.

My purpose is to seek these beautiful moments and to relay them to other people. I believe that we are connected in ways that we cannot always immediately see. My time on earth will have been meaningful if I have felt gratitude for the beauty around me, engaged with the sublime, and allowed other people to feel that same joy. This world is inherently meaningful. Art is the seeking of this meaning. 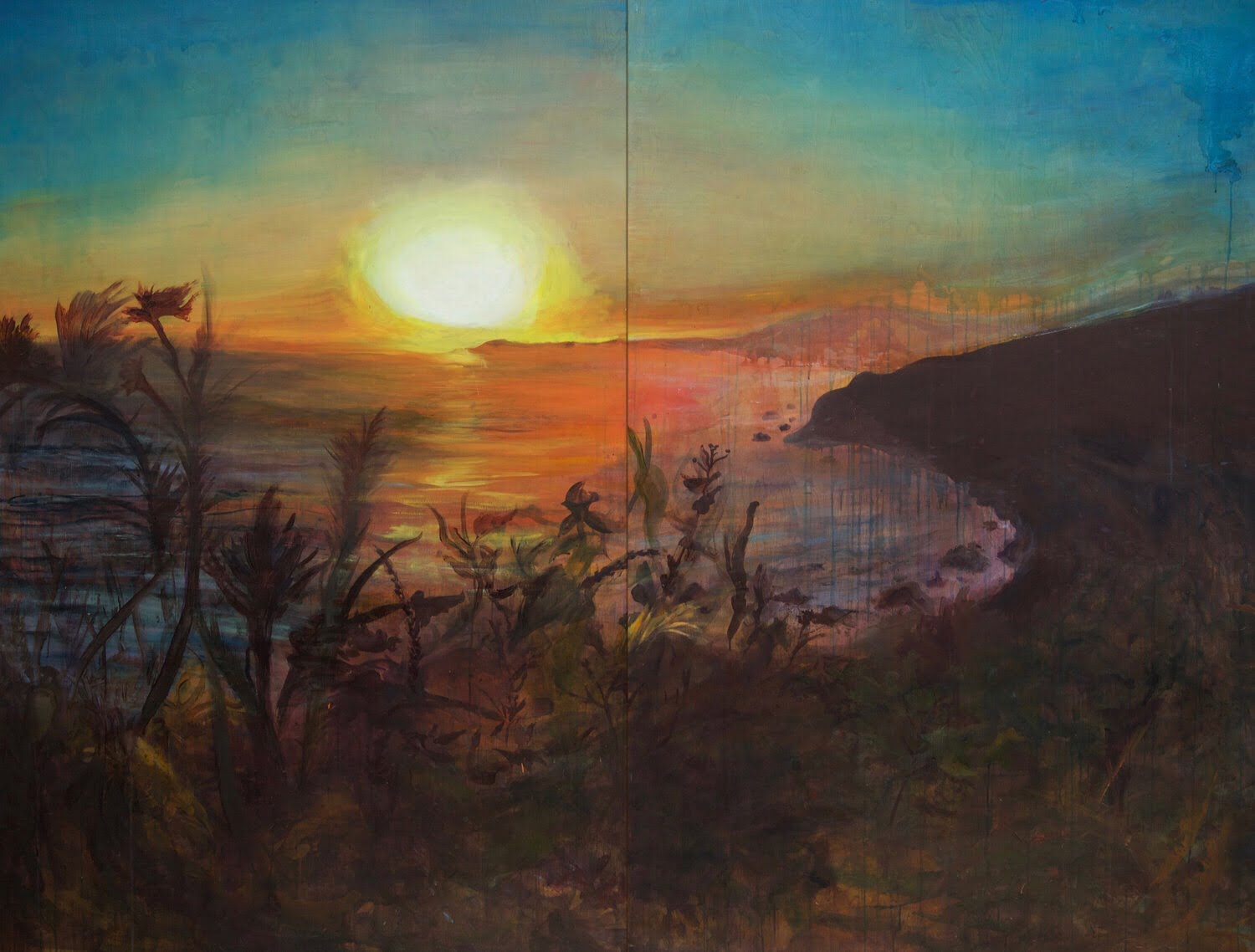