Vaughn Lowery, the president of 360 MAGAZINE, has always strived for positive social change. He graduated from Cornell University‘s ILR School. From there, he became active in modeling, acting and publishing.

A decade or more, Vaughn Lowery became notable when he appeared in Kmart’s smash commercial – Joe Boxer. It helped the retailer roughly sell 20 million dollars per week. By becoming an exclusive spokesperson, he appeared with Leeza Gibbons on Extra, Katie Couric on Today Show, and Jay Leno on The Tonight Show.

Years back, ABC News Primetime aired a segment chronicling his life, along with the tragic John Ritter story. Vaughn has also filmed a Super Bowl commercial, completed a high-profile Dasani Water billboard ad campaign, appeared on America’s Next Top Model, guest-starred on the comedy, Scrubs, and screened his controversial 35mm festival film, The Young & Evil, at Sundance 2009. Having been represented by major industry players such as NEXT, he was also named Seventeen Magazine’s 17 Hot Guys. His hindmost project The Company We Keep boasts director Roy Campanella II along with comedic co-star Leslie Jones. At present, Vaughn wrote a short, Chasen Life, which won a writing competition. He adapted audiobook Say Uncle into a feature-length film, pitched a reality series and is in the process of architecting an immersive design experience.

As of late, Lowery has produced 360 MAG, a podcast on Audible, Apple and Spotify as well as an NFT Animal Series on OpenSea.

In his spare time, he designs e-bike bras and reconfigures their silhouettes.

At the junction of fashion and hip-hop lies the iconic and immortalized designs of Karl Kani. Coined the Godfather of Streetwear, the brand’s designer, born Carl Williams, first developed an interest in fashion when he watched his father, a Panamanian immigrant, have his clothing personally made by a tailor. In a conversation with Flaunt, Williams said, “Watching him make his own clothing inspired me to understand how easy it is to make clothing. […] so I decided I wanted to make my own outfits with my dad’s tailor.” This endeavor quickly became a small business of its own as friends would ask Williams to make them replicas of whatever styles he was wearing. But the real turning point moment was when an incredulous friend refused to believe that a certain jacket had actually been made by Williams, asking why his name was not emblazoned on the piece’s tag. The “street revolution”—as Williams calls it—then began, and every new design proudly had Williams’ name on it.

In 1989, at just 17 years old, Williams moved to Los Angeles to pursue fashion more seriously. He opened a store on Crenshaw Boulevard and continued to design, but this time under a new moniker, Karl Kani. According to the official Karl Kani website, the name came to being as the brand grew in recognition and demand, and consequently, Williams would always ask himself, “Can I do this?” It was with this incessant question in mind that he rose to his own challenge and legally changed his name to Karl Kani, an alternative spelling of both his birth name and “Can I?”

Since the brand’s electric inception, Karl Kani filled a void in the world of fashion and revolutionized the concept of streetwear. In the Flaunt interview mentioned above, Kani said, “Hip-hop needed a clothing brand; Karl Kani needed an industry, so we [could] combine together and [were] able to create success for everyone.” Karl Kani quickly became the “it” brand for the Golden Age of hip-hop that emerged in the late 1980s and commanded the music and pop culture scene through the 1990s.

The eternally cool streetwear brand became the paragon of and blueprint for a distinctive revolution in the world of fashion. In a white-dominated industry, Karl Kani clothing was unapologetically designed with black people, and specifically black creatives, in mind. “The only thing that really kept me striving was seeing black people being successful in the music industry,” Kani told The Los Angeles Times in 1994. “I wanted to be a part of that, but I knew I couldn’t sing or dance or rap. I couldn’t do all that, but I could provide clothing for the people who were out there, who could make me famous at the same time.”

Kani formed poignant and lucrative bonds with many of these black performers, most notably Tupac Shakur and Biggie Smalls. In 1994, Kani approached Tupac about shooting a campaign for the fashion company since the rapper often sported his clothing and asked how much he would charge for the favor. As Kani remembers it, Tupac responded, “No, I’m not charging you for nothing. You’re my people, you’re black. I got you.” His only request was that Kani put his song, “Thug Life” in the background of some of his advertisements. The Karl Kani × Tupac collaboration became iconic: a moment in which two art forms came together and the world stood by to watch.

Kani’s relationship with Biggie was solidified when the artist shouted out the brand in his song, “One More Chance,” rapping: “I got the funk flow to make your drawers drop slow, so recognize the dick size in these Karl Kani jeans. I wear thirteens, know what I mean?” (And by the way, Biggie really did wear a size thirteen in Karl Kani jeans. Kani consciously made clothing for men of bigger sizes who fashion largely ignored at the time.)

You can check out Tupac, Biggie and a collection of other celebrities wearing Karl Kani HERE.

One of Kani’s most resonant, popular and withstanding designs was the wide-leg jeans. The design came to being as Kani noticed that people would size up when purchasing jeans to achieve a baggier aesthetic but the waists would then be far too large on them. He ingeniously bypassed this problem by increasing only the size of the pant legs and never altering the waist.

If there is anything that defines Kani, though, it is his adaptable, trendsetting and forward-thinking mind. When his signature wide-leg jeans were co-opted by other brands, and as the streetwear look evolved past its earlier days, Kani ensured that his designs pioneered stylistic change, never to be left behind. “A lot of people are doing a lot of the things we used to do, and we want to look different,” Kani said in 1994. “By staying real and staying focused and always changing your style, you’re always going to stay ahead of the marketplace.”

Recently, Karl Kani has made a striking resurgence in the world of streetwear due to its on-point designs—including an entire collection of unisex pieces—and the rise of nostalgia fashion, now making the brand a multi-generational and inclusive powerhouse. This new wave of Karl Kani designs has been accompanied with a new troupe of black artists advertising the brand. For example, the rap group, Migos, formed a relationship with Karl Kani starting in 2015. “They wore it in all their videos and press and they were able to reintroduce my brand to a whole new young generation which was really cool because they were on top of their game,” Kani said to INDIE Magazine in 2019. Kani also told Wonderland Magazine that he sees artists like “Rihanna, Travis Scott, A$AP Rocky [and] Keith Powers” as dream collaborations and models for the brand: artists that represent the eternal spirit and vibe of Karl Kani.

It is safe to say that no matter who takes over the hip-hop scene next, or however the world of street fashion reinvents itself, Karl Kani will be a part of it. 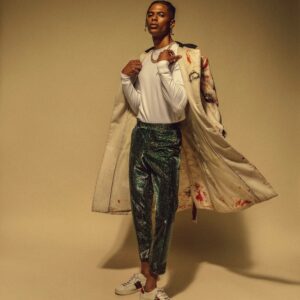 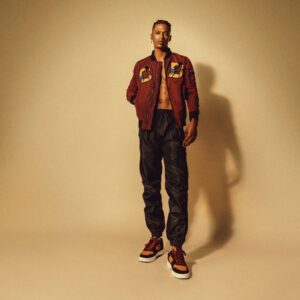 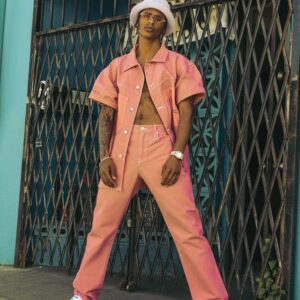 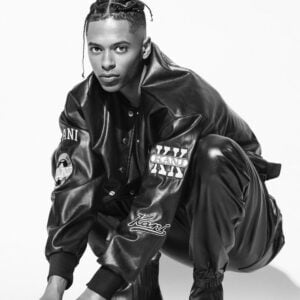 K.T.S.E. was unveiled Thursday night at a livestreamed listening event on the Universal Studios lot in Los Angeles. Universal’s famed “New York” set was transformed into Taylor’s native Harlem, with street signs pointing to 141 Street and Lenox Avenue, while mock-NYPD cruisers flashed their blue and red lights into the Hollywood night. The event was livestreamed on Twitter, and featured merch designed by Cali Thornhill DeWitt. Teyana Taylor merchandise is available now at her exclusive online store: http://shop.teyanataylor.com/

Teyana Taylor is one of the most versatile entertainers of her generation. As a respected recording artist, dancer, choreographer, fitness aficionado, actress and model, she has made waves across a variety of fields. Her Vh1 reality show Teyana & Iman was highly successful, with the finale coming in as the #1 watched show on cable television on a Monday night in the 9pm time slot. Teyana opened Junie Bee’s Nail Salon, a 90’s inspired salon in Harlem in an exclusive partnership with OPI Products. Coming up, she will star alongside Blair Underwood and recording artists French Montana in the Netflix film The Afterparty. She will also star in BET’s scripted series, Hit The Floor, premiering on July 10, with upcoming movie The Trap with Mike Epps and T.I. following. Her collection with GCDS launched recently in addition to her ongoing partnership with her own Reebok shoe line. Her recent Pretty Little things x Karl Kani collaboration sold out in a whopping 19 minutes.
Teyana’s dance performance in Kanye West’s “Fade” music video became a global viral sensation, attracting 100 million + YouTube views, and won the 2017 MTV VMA for “Best Choreography”.