Today, alternative singer/songwriter Ricky Hil releases his latest single and music video “Tryin,” out now via 10K Projects. Following up the success of his November single “Break My Heart,” “Tryin” gives fans a glimpse into Ricky’s next full length project, SSDD, out soon. “I strive to bring the gritty truth of my generation into my music and lyrics,” he says. The music video for “Tryin,” directed by Aidan Cullen, captures that feeling visually, as Ricky walks through the dark-lit streets of LA, singing “life is unfair to you / life is unfair to me.”

You can listen to “Tryin,” here and watch the new music video here.

Since his debut project The Lonely Limo—a fearlessly personal mixtape featuring guest spots from heavy-hitters like Lil Wayne—Ricky Hil has brought an unapologetic honesty to his music. Over the years, that approach has left a powerful impact on an entire wave of musicians in the underground scene, including a number of rappers/singers who’ve emerged as major cultural figures (Kid Cudi, XXXTentacion, The Weeknd, Juice WRLD, to name just a few). In his upcoming project SSDD, the consummate artist’s artist sheds even more light on his demons, and embraces a stronger sense of purpose than ever before.

“A lot of the time in my songs I’m saying shit I don’t really even want to say—but I do it anyway, because I know there are people out there that feel the same way I do,” says Ricky.

Born in Fairfield County, Connecticut but based in Los Angeles, Ricky first started experimenting with making music as a kid, armed with a turntable set-up and a stack of vinyl. “I fell in love with it, and I’d stay up all night every weekend—I didn’t care about anything else, I just wanted to create as much as possible.” Although South Philly rappers like Beanie Sigel influenced his early work, Ricky later discovered singer/songwriters like Bob Dylan and focused more heavily on sculpting potent melodies and sharpening his songcraft. Mostly raised on rock-and-roll, he later played in a punk band, infusing his songs with a kinetic energy that still permeates the music he makes today.

Ricky has recently refined his vision, and fully leaned into his love for darkly charged beats and slow yet dynamic tempos. “I went into all these new songs just wanting to be completely myself,” he says. As part of that creative revitalization—which includes recording up to five songs a night—he’s also begun drawing his own cover art, naming famed tattoo artists Jack Rudy and Mister Cartoon among the main inspirations on his artwork.

Recorded in quarantine and co-written with relentless hitmaker Ross Golan alongside rising songwriter/producer Luke Niccoli, the single finds Stefani reminding fans of what she does best: create vibrant, uplifting music that is real and honest to who she is as an artist.

“This song is a way of saying I’m back with new music. It’s a fun, lighthearted song because I got inspired and hope to bring a little bit of joy, said Stefani. “The idea was to write a song that had a bit of a nostalgic feeling to it, so I think musically it reminds you of back in the day, going back to where I started musically which was with ska and reggae. I’m still the same me but here’s something a little bit new in case you feel like hearing a little bit more of me.”

Musically, “Let Me Reintroduce Myself” is a full-circle moment, with an instrumental that nods to her roots with the ska-punk band No Doubt. Bass-heavy beats and breezy acoustic guitars course under and around her laid-back vocals, as Stefani confidently asserts her space in the modern musical universe: “In case you forgot—no, I’m not records on your shelf.” The single also offers a sly callback: “I already gave you bananas,” she sings playfully, nodding to the cheerleader chant on her 2005 Pharrell Williams-produced No. 1 hit, “Hollaback Girl.”

“Let Me Reintroduce Myself” caps off a busy year for Stefani. She had two top 10 hits on Billboard’s Hot Country Songs chart with fiancé Blake Shelton, “Nobody But You” and “Happy Anywhere.” And her holiday album, You Make It Feel Like Christmas, was just reissued with two new songs, including Ryan Tedder co-write “Here This Christmas.”

Listen to “Let Me Reintroduce Myself” here.

Gwen Stefani continues to affirms her pop dominance with her first single of 2021, “Slow Clap,” available now at all digital retailers via Interscope Records.  With this release, Stefani is featured on New Music Daily on Apple Music.  Listen to “Slow Clap” HERE.

Stefani co-wrote “Slow Clap” with hitmaker songwriter/producer Ross Golan and songwriter Luke Niccoli, the same team behind her 2020 single “Let Me Reintroduce Myself.” “Slow Clap” is, once again, classic Gwen. The song mixes pop with easy-going grooves inspired by reggae and hip-hop. Stefani offers up vulnerable lyrics about embracing resilience and staying confident despite feeling like an underdog. “Been the champion, rang the bell / Rocked the bottom, been through hell,” she sings. “Climbed the mountain, now I’m well / I just feel like coming back for the belt.”

“Slow Clap” builds on the momentum Stefani kicked off with “Let Me Reintroduce Myself,” which reached No. 1 on the iTunes chart upon its release. A three-time GRAMMY® Award winner, Stefani has achieved global success as a performer, songwriter, and frontwoman of No Doubt, and a multi-platinum solo artist, among other accomplishments. To date, she’s sold more than 50 million units worldwide. Her 2015 solo album, This Is What the Truth Feels Like, debuted at No. 1 on the Billboard 200. She also spent five seasons as a coach on the Emmy®-winning NBC series The Voice where she led contestant Carter Rubin to be crowned the season 19 winner. The classic warmth of “Slow Clap” sets the tone for what fans can expect from Stefani as she plans to release more music this year.

HER UNVEIL MUSIC VIDEO FOR “NEIGHBORHOOD” 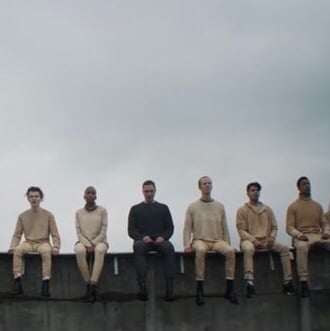 Today, Her reveal the music video for their brand new single “Neighborhood.”

This is the latest song to be released from the critically acclaimed band’s highly anticipated self-titled full-length debut, Her [Republic Records] — available everywhere March 30, 2018. Pre-order it here.

While still in school, the half-German Victor and the French Simon met in 2007, bonded like long lost brothers, started making music together equally informed by old school soul a la Otis Redding and post-Yeezus hip-hop, and formed Her in 2015. Success followed as the breakout “Five Minutes” soundtracked Apple’s “Shot on iPhone” campaign and eventually generated over 6.7 million Spotify streams. The duo released a pair of EPs Her Tape #1 and Her Tape #2, spawning fan favorites such as “Quite Like,” “Union,” and “Her” and amassing over 20 million cumulative Spotify streams. Merging artfully seductive and provocative visuals and dreamy newer wave pop with a jazz undercurrent, the boys crisscrossed the globe in support of the EPs, including making waves stateside. In the middle of it all, unbeknownst to anyone but those closest to him, Simon lost a long, quiet, and arduous battle with cancer in August 2017. With his friend’s spirit always close by, Victor worked on what would become the duo’s 2018 major label full-length debut, Her [Republic Records].