Talk show host Ellen DeGeneres has shut down her talk show until January after testing positive for Covid-19.

“Hi Everyone,” DeGeneres wrote. “I want to let you all know that I tested positive for Covid-19. Fortunately, I’m feeling fine right now. Anyone who has been in close contact with me has been notified, and I am following all proper CDC guidelines. I’ll see you all again after the holidays. Please stay healthy and safe,” wrote Ellen on The Ellen DeGeneres Show’s official Twitter account.

The announcement to cancel the show came from a spokesperson from Telepictures studio. “Following Ellen’s announcement this morning, we have paused production on the Ellen DeGeneres Show until January,” said the statement.

The show had returned to the air in Septmeber after a summer of employees reporting the show as a “toxic work environment.” Ellen made an apology about these allegations during the September premire.

“As you may have heard this summer, there were allegations of a toxic work environment at our show,” DeGeneres said during the first episode back on the air. “And then there was an investigation. I learned that things happened here that never should have happened. I take that very seriously. And I want to say, I am so sorry to the people who were affected. I know that I’m in a position of privilege and power. I realized that with that comes responsibility and I take responsibility for what happens at my show. This is The Ellen DeGeneres Show. I am Ellen DeGeneres. My name is there. My name is there. My name is on underwear. We have had a lot of conversations over the last few weeks about the show, our workplace and what we want for the future. We have made the necessary changes. And today we are starting a new chapter.”

DeGeneres has apologized to her staff for the environment of the show. Employees reported accounts of sexual misconduct, racism and “culture of fear.”  This has resulted in many celebrities turning down the oppurtunity to be featured on the show. Although the show has featured big celebrities such as Justin Bieber and Jimmy Kimmel in the past, celebrities don’t want to be featured on a show with such negative backlash.

Ever since the show’s return to air, the once popular talk show is now struggling to stay on top. According to Buzzfeed, the show hasn’t been able to book A-List celebrities for appearances. The show has also lost advertisers as well as seeing a large dip in viewer ratings. Usually Decemeber is a busy time for The Ellen Show because of the “12 Days of Giveaways” segment that runs through the holiday season.

This year The Ellen Show planned to give the gifts to those impacted by coronavirus such as frontline workers and affected families. However, an employee has said this year’s gifts that will be given to the audience are much less extravagant than usual.

“In a typical year, ‘12 Days of Giveaways’ is huge. We’ve basically claimed Christmas on daytime TV. When you think of Christmas on TV, you think of The Ellen Show,” said the employee. “Everyone wants to be in the audience. Everyone wants the gifts. And so we line up all these crazy sponsors, and people love it. But this year, our ‘12 Days’ is more condensed. We don’t have as many sponsors.”

Although the show is postponed until January, DeGeneres has signed a contract that continues the talk show through 2022. While the show is struggling more than usual, executives have said the show isn’t going anywhere.

Bravo Media is packing up the shotski and heading west when “Watch What Happens Live with Andy Cohen” returns to Los Angeles for four weeks of shows beginning Monday, January 14 at 8PM PT/11PM ET. The Hollywood residency marks the third time Cohen has brought the Bravo Clubhouse to the city of stars since the series’ inception. Guests include Matthew McConaughey, Christina Aguilera, Anne Hathaway, Judd Apatow, RuPaul Charles, Jay Leno and more.

“Moving the Clubhouse to LA is a win all the way around,” said Andy Cohen, host and executive producer. “There will be great guests, great energy and I can make a 9pm dinner reservation after we get off the air!”

Much like the Bravo Clubhouse in New York City, these shows will be filmed in front of an intimate audience.

“Watch What Happens Live with Andy Cohen” is consistently making headlines with bold interviews viewers don’t see anywhere else. The Bravo Clubhouse has become a nightly destination for some of the biggest names in pop culture, who stop by for a signature drink and stay for the candid conversation. Whether “Pleading the Fifth” or “Opening The Vault,” countless memorable moments have been revealed as host Andy Cohen continues to go there–challenging both celebrities and Bravolebrities on the only truly live show in late-night television.

Tune-in to tonight’s “Watch What Happens Live with Andy Cohen” at 11PM ET/PT with guest Lisa Vanderpump from Bravo’s “The Real Housewives of Beverly Hills.”

In case you missed it! Pusha T talks luxury street rap with Trevor Noah on the Daily Show.

We all love Sharon Osbourne for her charming, cheeky and opinionated personality, but guess what?! She’s also an experienced house flipper! Sharon has flipped dozens of homes – big and small – and made millions selling to celebrities. Premiering Friday, October 6th at 10pm ET/PT, viewers will see an entirely new side of the television host and media personality on an original special, “Sharon Flipping Osbourne.”

On the one-hour special, Sharon makes a deal with a couple in Los Angeles who were looking to sell their home but had no idea who would be knocking on their door to help! She offers to put her own money into the mix to update the house, but this means she’s in charge: from hiring the contractors, decorating with décor from her own warehouse to working with her favorite realtor. In the end, if they get an offer that works, she splits the profits with the seller…it’s flippin’ awesome!

About WE tv
With compelling, can’t miss unscripted shows, WE tv’s programming is fueled by personalities and relationships filled with purpose and passion. WE tv welcomes everyone and creates an inclusive experience across all platforms: on TV, online, on demand, and social media, embracing how today’s digitally savvy, socially engaged audiences connect through content, using it as a catalyst to drive conversation and build community. WE tv is owned and operated by AMC Networks Inc., and its sister channels include AMC, BBC America, IFC and SundanceTV.

“The Tonight Show Starring Jimmy Fallon” will host “Miley Week” Oct. 2-6, with music superstar and longtime friend of the show Miley Cyrus performing each night. This unprecedented weeklong celebration on “The Tonight Show” will kick off with a sit-down chat with Fallon on Monday, Oct. 2 and feature one-of-a-kind performances and sketches. Fans can also expect special guests and surprises all week.

The late-night audience is always in for a surprise when Cyrus is on “The Tonight Show.” She has appeared seven times over the past two years, and was the only guest who completed two episode takeovers. Cyrus and Fallon together have produced many fan-favorite moments, from her crashing as Hashtag the Panda, to the most recent of which saw them busking incognito at the Rockefeller Center subway station.

Her new album, “Younger Now,” is set to be released Sept. 29. “Younger Now” is by no means a reinvention, but more a continuation. As the title-track expresses, “No one stays the same.” Cyrus has always been true to herself on her creative journey and has shared her life and experiences with fans through her artistry. Her prior albums were a direct reflection of her unapologetic self, and uncompromising vision of her music. And with “Younger Now,” Cyrus took the full creative reigns with an intention to share a piece of herself, unlike before. She wrote every lyric, co-wrote the music, and co-produced the album.

Cyrus will return as a coach on the 13th season of NBC’s hit music competition series “The Voice,” which premieres tonight, Sept. 25 at 8 p.m. ET/PT.

The schedule for the week of Oct. 2-6 includes:

From Universal Television and Broadway Video, “The Tonight Show Starring Jimmy Fallon” is executive produced by Lorne Michaels and produced by Gerard Bradford, Mike DiCenzo and Katie Hockmeyer. Jamie Granet-Bederman produces. “The Tonight Show” tapes before a live studio audience from Studio 6B in 30 Rockefeller Center. 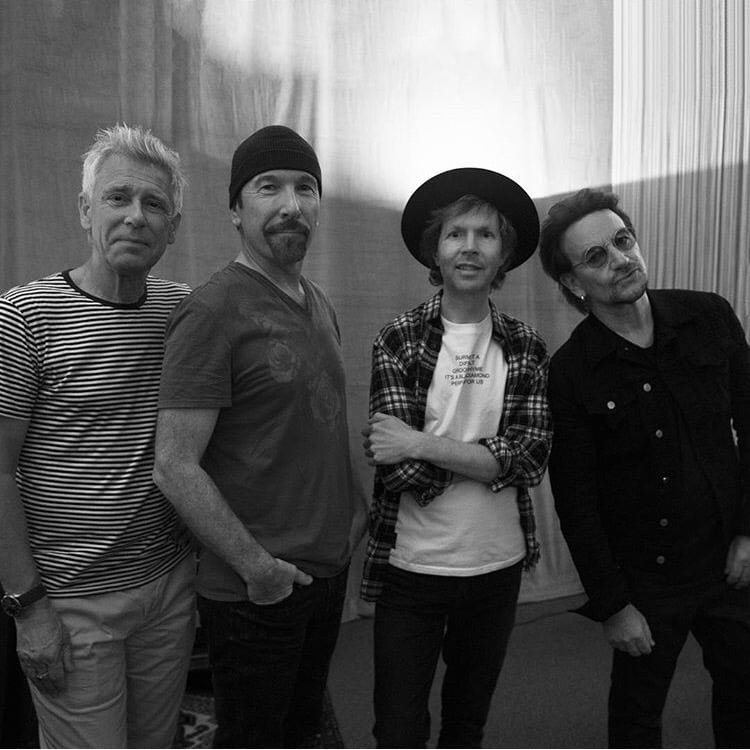 Below please find online links of U2’s performances as well as chat segments with Bono and The Edge last night on “The Tonight Show Starring Jimmy Fallon.”

U2: Bullet the Blue Sky

Music guest U2 performs “Bullet the Blue Sky” for the Tonight Show audience.

U2: You’re the Best Thing About Me

Music guest U2 performs “You’re the Best Thing About Me” for the Tonight Show audience.

Bono on the Importance of Supporting DACA Dreamers

U2’s Bono and The Edge talk about their album Songs of Experience, it’s relevance to the current U.S. political climate and the importance of immigrants to the American dream.

U2’s Bono and The Edge share some details about their anticipated album Songs of Experience.