Today, The Last Artful, Dodgr (she/they) announces new album Hits Of Today that will release on August 19.  In conjunction with the announcement, she tags Young M.A for a new version of her previously released hard-hitting track “Cloverfield.”  The track is a rap anthem for women, about women so it only made sense that these two collaborated.  The album will feature “Cloverfield” and “Hullabaloo” which was released earlier this year.  HIGHSNOBRIETY commended Dodgr’s “exceptional, elastic voice and a bewitching grasp of melody.”  With co-signs from Anderson .Paak, Mark Ronson, Portugal. The Man, and more, Dodgr is set for a breakthrough year, leading up to the debut album this summer.

ABOUT THE LAST ARTFUL, DODGR

Close your eyes and try to imagine the musical lovechild of The-Dream and Diane Warren. The person you should see is The Last Artful, Dodgr. The rapper and singer-songwriter (pronouns: she/they) defies the boundaries of hip-hop and the binary with heady bops like “Hullabaloo” and “Better Safe Than Social.” Both an artist and a muse, Dodge captivates with a trippy aesthetic that comes alive through their fashion, music videos, and socials.

Born and raised in Los Angeles, Dodgr—whose name is a reference to both their hometown team and Oliver Twist—didn’t start secretly writing music until college at Cal Poly Humbolt. But there were so many signs pointing them in that direction. For example, they started to master words and language early as a baby; and their formative musical inspirations included Missy Elliott, Prince, and Sam Cooke. Living in an artist “greenhouse” in undergrad and scribing songs that they kept to themselves, Dodgr knew that she was incredible. But that musical ingenuity blossomed when they made the fateful decision to move to Portland.

Dodgr, ever sui generis, grew a following in Portland, despite the city’s reluctance to hip-hop, and dropped their first mixtape 199NVRLND in 2013. Collaborating with other local talent in the area and dropping singles like “Oofda” and “Jelly Hunt,” she established herself as a lyrical heavyweight with an edgy creative ear. This is what put them in the orbit of Aminé, who invited Dodgr to lend their colorfully animated voice as a background vocalist during their performance on Late Night with Jimmy Fallon in 2016. In 2017, they appeared as a feature on Anderson Paak’s Oxnard alongside Snoop Dogg and in 2019 they were tapped by Mark Ronson to contribute to the soundtrack for the animated film Spies in Disguise. Even hip-hop legend, Black Thought wanted in on Dodgr’s action, recruiting her for several songs on his 2020 album, Streams of Thought, Vol. 3: Cane & Able. But Dodgr’s most notable hit to date is their smooth, infectious 2020 single “Hot,” which snagged a placement on the Emmy-winning HBO series Euphoria.

Now signed to Interscope Records and hard at work on a debut album, Dodgr is offering a 360 creative experience like other multi-hyphenates like Tierra Whack, Smino, and Tyler, the Creator. They stay true to their roots as a wordsmith, writing lyrics that are thought-provoking. But Dodgr is playful and light-hearted, not above waxing poetic about ass and titties, either. Combining her lavishly buoyant voice with unrestrained visual artistry, she pours into her music videos, style, and live performances as she does the records she produces. In a nutshell: Dodgr is a musician on a completely different plane.

Today Dodgr identifies as a genderfluid, masc presenting femme. They stay balanced with a Gemini sun and Taurus moon. What we have here is the next queer icon.

On the song, Khalid shared “I’m really excited to share “Last Call” with all my fans. It’s important to me to commemorate this day and look back at everything that has happened. I can’t believe it’s been 5 years already. I hope you guys enjoy it and celebrate with me and all we’ve done together.”

Multi-platinum selling global superstar Khalid, who was named one of Time’s Most Influential People of 2019, has taken the world by storm since his first single, the certified diamond “Location” (released right before his high school graduation) exploded onto the scene leading to a major label deal with Right Hand Music Group/RCA Records followed by the release of his debut album, the 4x platinum-certified, American Teen. His sophomore album Free Spirit, released to critical acclaim in 2019, was declared a New York Times “Critic’s Pick” and was called “superb” by the Associated Press. The album, which has been certified platinum by the RIAA, debuted at #1 on the Billboard Top 200 and features the Grammy-nominated multi-format #1 single “Talk”. Free Spirit has garnered over 11 billion streams worldwide. Khalid, who has been called a “pop prodigy” by Rolling Stone has been streamed over 30 billion times worldwide across all partners, has been nominated for 7 Grammys and has won numerous awards including 6 Billboard Music Awards, 3 American Music Awards, a Teen Choice Award, an MTV Video Music Award and an MTV Woodie Award. Khalid has collaborated with some of music’s biggest stars including his #1 singles “Love Lies” (with Normani), “Eastside” (with Halsey and Benny Blanco) as well as hits with artists Billie Eilish, Shawn Mendes, Marshmello, and more. The Mayor and Council of the City of El Paso honored Khalid with a “Key To The City” marking September 13th, 2018 “Khalid Day.” Khalid, alongside his mother, launched The Great Khalid Foundation, which is committed to helping families by alleviating a burden of need.

In the wise opening words of J.I.D, “I need a minute to meditate.” On the new song “Baguetti,” Smino (Zero Fatigue/Downtown/Interscope) is joined by Dreamville’s J.I.D and superproducer Kenny Beats to grant us all three minutes to be still with our thoughts. In his typical eccentric manner, the St. Louis artist acknowledges God for not forsaking him while calling out those who haven’t dropped a metaphorical penny into the collection plate of society. J.I.D then wraps up today’s meditation session with a TED Talk-level explanation of his credentials in the music industry. Fans around the world can now set aside their daily time of peace on all platforms after they aggressively demanded an official release following a snippet.

Earlier this year, Smino released his song “Tempo” for his hardcore fanbase. Last year, Smino was featured on the Dreamville posse cut, “Sacrifices,” with J. Cole, Saba, and Earthgang. He also nabbed a coveted guest spot on Chance the Rapper’s album, The Big Day, on the song, “Eternal,” which peaked at #25 on the Billboard Bubbling Under Hot 100 chart. The duo performed the track for the first time at Lollapalooza. Smino is currently gearing up to release new music.

Smino is on a roll. The St. Louis rap phenomenon has been flowing nonstop since the release of his sophomore album, NOIR, last November. His latest single, “Reverend,” produced by Chicago newcomer, prodxvzn, is a lyrical stream of consciousness that serves as another testament to the midwest MC’s otherworldy gifts. Listen HERE.

The artist is currently featured on the Dreamville posse cut, “Sacrifices,” with J. Cole, Saba and Earth Gang. He also nabbed a coveted guest spot on Chance the Rapper’s album, The Big Day, on the song, “Eternal.” The duo recently performed it for the first time at Lollapalooza and, by all accounts, ripped the stage.

Earlier this year, Smino headlined the sold-out “Hoopti Tour,” which took him to 33 cities across the United States, Canada and England and appeared on an episode of Wild’n Out. His new single “Reverend” is now available at all digital retailers via Zero Fatigue/Downtown Interscope Records.

“Exhale” only scratches the surface of Kemba’s immense lyrical talent. It acts as a reminder that through all the trials and tribulations, he’s still an important fixture in NY rap and hip-hop as a whole. This single sets the tone for what’s to come from Kemba as he works on his next body of work.

Be on the lookout for a lot MORE soon.

It makes perfect sense Kemba calls The Bronx–the birthplace of hip-hop–home. He literally carries the genre with him everywhere. Making a name for himself as a fan favorite under the name of YC The Cynic, he dropped a series of lauded projects and songs from 2010 through 2013. Adopting the moniker Kemba, he ignited his rise with his 2016 album Negus which received critical acclaim. In addition to a highly cited interview on Real Late W/ Peter Rosenberg, he joined Kendrick Lamar on stage for a spontaneous performance that was widely circulated online. His skills not only impressed Kendrick but also caught the eye of Brasstracks (Chance The Rapper’s “No Problem”), who reached out and went to work, helping Kemba craft his forthcoming album due out next year.

In addition to the shoe, The Interscope and Air Jordan experience will launch this weekend to support NBA All-Star. The build out consists of a full consumer experience, on-site customization and live music. Interscope has built a fully functioning studio on campus where their artists will be utilizing equipment throughout the weekend. So far, recording artist and producer Pi’erre Bourne, Shady Records artist Boogie, Smino and LVRN’s Lou The Human have all visited the studio. 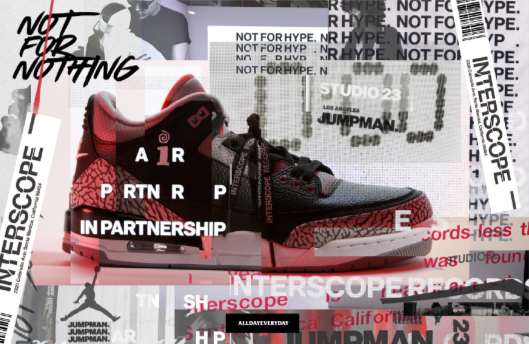