Last month Maisie took the stage at CBS‘s Late Late Show with James Corden for an electrifying performance of her viral single “Cate‘s Brother.” The episode was part of Corden’s special run of shows from London and landed in the midst of a 5 night stand at London’s Wembley Stadium supporting Ed Sheeran‘s “+–=÷x Tour.” Watch the performance HERE.

Recently announced, Maisie‘s North American headline tour dubbed ‘i’m telling the whole of america tour’ is selling fast. The 5-date run kicks off on November 4th with a sold-out show at Hammerstein Ballroom in New York and makes stops in Toronto (SOLD OUT), Chicago (VENUE UPGRADED), and San Francisco (SOLD OUT) before wrapping at The Wiltern in Los Angles on November 14th. For tickets and more information on Maisie’s upcoming North American tour please visit HERE.

Last month, Maisie unveiled “Cate’s Brother (Matt’s Version),” a stripped-back version of her viral song featuring British singer-songwriter Matt Maltese. No stranger to a TikTok hit – his own, ‘As The World Caves In’, exploded on the platform during lockdown – Matt joined Maisie to expand the ‘Cate’s Brother’ universe, and shared his response to the original story.

Released in May, the original version of “Cate’s Brother” arrived to critical acclaim and has already cracked 8.7M million streams. Based on a true story, Maisie initially teased the track live from a studio session in February and with an overwhelming response from her fanbase, continued working on the song in real time, sharing everything from Cate’s first listen reaction to debut performances. Upon release, Billboard praised the track as “fantastic” adding “the storytelling beneath the wiry pop-rock production is top-notch” while People declared Maisie as “pop’s next big thing.” Consequence of Sound described the track as “vibrant, playful and fun” and hailed, “If there was ever any doubt that Peters can oscillate between more delicate, introspective tracks over to crowd-ready bops like this, let ‘Cate’s Brother’ be the end of the conversation.”

Before amassing over half a billion global streams, Maisie spent time honing her craft in sessions across London, LA and Nashville, creating songs for her 2021 debut album ‘You Signed Up For This’ alongside the likes of Ed Sheeran, Steve Mac, Fred again.., Johnny McDaid, Miranda Cooper, and producers Joe Rubel (Tom Grennan, Benjamin Francis Leftwich), Afterhrs (Niall Horan, GRACEY), Rob Milton (Easy Life, Holly Humberstone) and Brad Ellis (Jorja Smith, Little Mix). With an innate gift for storytelling, crafting relatable, diary-entry songs, ‘You Signed Up For This‘ is both Maisie’s coming of age story and a love letter to girlhood; penned with the wit, charm and quiet confidence that has seen her ascend from busking on the streets of Brighton to signing with Ed Sheeran‘s Gingerbread Man Records and selling out her entire 2022 North American ‘You Signed Up For This‘ tour.

Returning home after her sold-out 19-date ‘You Signed Up For This‘ tour, which included standout shows at The El Rey and New York’s Webster Hall, Maisie is playing to a further 2.5 million+ people this summer as support on Ed Sheeran‘s ‘+–=÷x Tour’ in Europe and working on the follow up to her acclaimed debut album ‘You Signed Up For This.’

easy life announced details of their much-anticipated debut album life’s a beach, which was to be released on Interscope Records on June 4, but is now available on all platforms (one week early)! In March, the album was teased by its powerful opening track a message to myself, and includes standout singles nightmares, daydreams, and more future-classics from the British five-piece, who won ‘Best New British Act’ at the 2020 NME Awards.

Receiving its first play on BBC Radio 1 today, a message to myself is easy life’s most candid and cathartic moment to date. A symphonic essay on depression – and a rallying call for self-love – the band worked on the track alongside world-class producer BEKON, whose credits include Kendrick Lamar’s DAMN and BJ The Chicago Kid’s In My Mind. One of modern pop’s more unsuspecting stars, a message to myself, says Easy Life front-man Murray, “is a reminder to keep doing you. It’s a celebration of individualism at all costs. Be yourself, nobody can do you better.”

2021 marks easy life’s graduation as the world’s definitive and most exciting band around. Over the last few years, the group have paved their own way via a catalogue bursting with introspective, escapist, outsider-anthems. Their effortlessly accomplished mixtapes – creature habits, spaceships, and junk food (which featured Arlo Parks, their only duet to date) – have led the rascal band of brothers to debut their album, life’s a beach: a title that makes total sense, argues Murray, when you’re “from slap bang in the middle of the country, geographically as far from the nearest seaside as possible.” The beach of life’s a beach is not, then, a Caribbean hideaway. Observational, universal and deeply personal, this rounded study of forgotten small towns is the record easy life have spent their young lives working towards. The fact they’re set to release their debut album as the world enjoys – hopefully – a safe return to the beach seems oddly fitting amidst their unpredictable rise to date.

A band formed right down to the name itself as an escape, songs like a message to myself cement easy life’s place in the world – as musicians, as young men, and as beacons of positivity. “All the lyrics and everything that you hear throughout all of easy life is stuff that has moved me to write it,” Murray comments on his source of inspiration. “When I feel really lonely and anxious and all these things that everybody always feels, my salvation from that angst and that paranoia is making music to get it out there… because if you hold onto it, I can drown in my own self-pity.”

Murray also sums up their upcoming debut album – “it’s a record that wishes it was anywhere else but here, yet at the same time fixates on a dreary middle England existence.” This EP is about simple life and mundane existence, and there may be more rain on the way in their native Britain, but life’s a beach is easy life’s absolute moment in the sun.

a message to myself is out now.

a message to myself

have a great day

music to walk home to 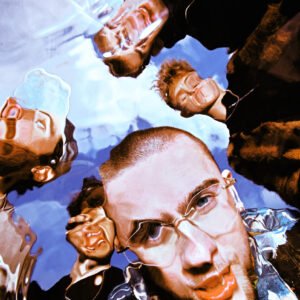 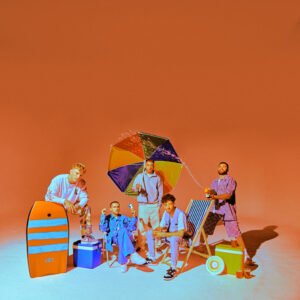