Today, Mulatto cements her position with the release of her RCA Records debut project Queen of Da Souf – click here to listen. To usher in the long-awaited release, Big Latto premieres the Sara Lacombe-directed video for “Youngest N Richest,” one of the many standout tracks from the energetic project – click here to watch.

This year continues to be a stellar one for the 21-year-old Atlanta-based rapper. Her track,“Bitch From Da Souf (Remix)” featuring Saweetie and Trina, was recently RIAA-certified Gold, making Mulatto the first solo female rapper from Atlanta to accomplish this feat. As Mulatto continues to climb the charts –#3 on Billboard’s Emerging Artists chart and Top 10 on the Nielsen BDS Mainstream R&B/Hip-Hop National Airplay chart this week, the “Muwop” video featuring Gucci Mane has reached 10 million views. Revealed last week, Latto is one of only two women inducted into the XXL 2020 Freshman Class, earning her another major milestone in her burgeoning career. In addition to her own music, Mulatto has been inescapable; from her recent cameo in Cardi B’s “WAP” video featuring Megan Thee Stallion, to countless features including NLE Choppa’s “Make Em Say,” and Hitmaka’s “Thot Box (Remix),” proving that Big Latto is bigger and better than ever before.

On top of her recent accolades, Queen of Da Souf solidifies Mulatto’s place in hip-hop as she displays her talent as a lyricist with witty, raunchy and raw bars. Gucci Mane, City Girls, 21 Savage and 42 Dugg make guest appearances, while producers Bankroll Got It, Hitmaka, Murda Beatz and more provide the addictive beats. The project includes previously released tracks “Muwop” featuring Gucci Mane, “Bitch From Da Souf (Remix)”featuring Saweetie and Trina, “No Hook” and “He Say She Say.”

03 In n Out feat City Girls

OMB Bloodbath brings the bars and ladies out in her latest single, “Bolt.” Produced by DZL and Johnny Yukon, the Houston MC bodies the beat with a continuous flow that caters to fans who enjoy her quick-witted rhymes. For the studio-based visuals, Bloodbath entertains the ladies during a studio session interrupted by a seafood boil, luxury retail tags, and her animated personality.

Fitting on any quarantine turn up playlist, “Bolt” is another hit on Bloodbath’s discography which has been praised by peers in the game like Obe Noir, Stunna Bam and Grammy-nominated producer Murda Beatz. She also found a huge fan in Beyonce when her “2018” track “All I Know” was featured on the singer’s “Classy Bougie Ratchet” playlist for TIDAL.

Representing Houston’s historic Third Ward, OMB Bloodbath is in a class all her own. Making her name for herself on the local tip with the hometown favorite, “Shootston” the rapper secured a deal with 10:22 PM and Love Renaissance (LVRN), in partnership with Interscope Records. Her first single“Dropout” showcases a vicious back and forth flow with fellow Texas native Maxo Kream. HotNewHipHop describes the song as a “slowburner” that confirms the artist “is providing all the reasons in the world right now to make sure all eyes are on her.”

GRAMMY Award-winning, multi-platinum hip-hop producer Murda Beatz is known for producing beats for Drake, Travis Scott, Gucci Mane, and more, and now he’s producing his own limited edition figure with Kidrobot. Supporting this Loot Launcher is the only way to get this exclusive Murda Beatz x Kidrobot 8” figure!

Grammy nominated Canadian superproducer, songwriter, and DJ Murda Beatz has returned with a new single “Doors Unlocked” with longtime collaborator Ty Dolla $ign and fast-riser Polo G. Following a busy first half of 2020 producing tracks on Lil Baby’s My Turn, Lil Wayne’s Funeral and more, Murda’s second single of the year as a solo artist is a spacious and summertime feel-good anthem that leaves room for his features to shine in their own right.

To commemorate this new release, Murda has also unveiled an exclusive collaboration with the premiere art toy brand Kidrobot and Loot Launcher to create a limited-run 8” skeleton figure priced at $85.00. “It’s an amazing opportunity to see something that was on a T-shirt, come to life as something tangible,” said Murda Beatz. “This will be the first figurine of me to ever exist, it just feels like a monumental achievement for me!” This is an exclusive figure and limited edition with preorder available on August 3rd at 10am PDT on Kidrobot’s site.

Additionally, 9lokknine will join fellow Cash Money Records artist Blueface on his tour, which starts July 15th. The rapper will be opening for Blueface on the tour and will hit major markets including Philadelphia, Washington D.C., Atlanta, Los Angeles and more. Tickets are available here.

The track arrives on the heels of 9lokknine’s Cash Money Records debut single “10 Percent.” Not only did the latter surpass 1.2 million Spotify streams, but it also amassed a staggering 23.7 million YouTube views and counting. It would also be featured by Genius, WorldStarHipHop, and more. The summer of 9lokknine starts with “Beef.”

Born and raised in Orlando, he lived with his mom and three brothers as dad shuffled in and out of jail. At the age of nine, he started rapping on Garage Band from his iPod, developing catchy cadences and a knack for rhymes. However, trouble proved inescapable throughout junior high and high school. 9lokknine logged multiple stints behind bars before finally writing his mom a letter from jail announcing that he’s going to “blow up” when he gets out…2018 saw him make good on that promise.

Inspired by Lil Wayne, T-Pain, Plies, and YoungBoy Never Broke Again, he turned up with a sizzling signature style on independent projects such as Loyalty Kill Love and Bloodshells Revenge. As he generated tens of millions of YouTube views and garnered widespread critical acclaim from XXL, No Jumper, Noisey, and more.  Pitchfork named “Front Door” among “The 5 Best New Rap Songs” and The FADER touted “Blatt” on “The 10 Best New Rap Songs Right Now.”

With an indescribable flow, incalculable unpredictability, and infectious intensity, 9lokknine shows off a fiery, focused, and fresh phenomenon for rap music in 2018. A turbulent nine-year journey paved the way for his arrival.

9lokknine is undoubtedly blowing up!

2 CHAINZ TAKES IT BACK TO SCHOOL w DRAKE, QUAVO, & MURDA BEATZ IN “BIGGER THAN YOU” VIDEO. 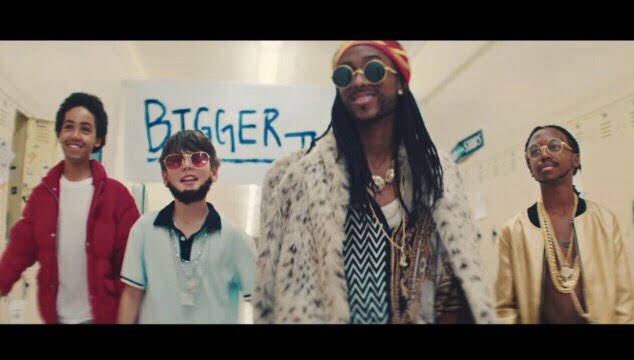 Out now, listen below: