Today, BANKS announced plans for a fall North American headline outing – her first since The Altar tour in 2017. The III Tour, which will kick off in Toronto on September 3 at REBEL, will include a September 8 show at Brooklyn Steel in New York and an October 1 concert at the Hollywood Palladium in Los Angeles. See below for itinerary.

BANKS said, “I’m so excited to get back out there and experience this next chapter with all of you. I can’t wait to see these songs that I have been working so hard on come to life.”

The fan ticket presale begins on Tuesday, June 11, at 10:00 AM local time. Tickets go on sale to the general public on Friday, June 14, at 10:00 AM local time at LiveNation.com. BANKS will offer VIP packages for each show with options that include GA tickets with priority access, Meet & Greet, limited edition merchandise, and more. Fans can visit www.VIPNation.com for more information.

Citi is the official presale credit card of BANKS’ tour. As such, Citi cardmembers will have access to purchase U.S. presale tickets beginning Tuesday, June 11, at 10:00 AM local time until Thursday, June 13, at 10:00 PM local time through Citi EntertainmentSM. For complete presale details visit www.citientertainment.com.

BANKS will also perform at such festivals as Music Midtown in Atlanta, Life is Beautiful in Las Vegas and Austin City Limits. In a live review, VARIETY praised her “Hellishly Divine Act” and noted, “[BANKS’] command of her audience was undeniable.”

Her new single, “Gimme” (Harvest Records), which is from her forthcoming album, III, has racked up over seven million cumulative streams since its debut as Zane Lowe’s World Record on Apple Music’s Beats 1. Naming it one of the songs “You Need to Listen to,”TIME Magazine observed, “‘Gimme’ is darker and heavier than her earlier work, leaning on minimalist, hollow percussion as layers beneath stuttering synths. If this is a sign of the BANKS to come, we’re promised a worthy follow-up.”

BANKS has amassed 1.2 billion global streams to date across all of her songs, including over 600 million cumulative streams in the U.S. alone. After the release of her breakout debut album, Goddess, she became the world’s most blogged about artist. The 2014 album included the RIAA-certified Platinum hit “Beggin For Thread” and the Gold single “Waiting Game.” The Altar, released in 2016, debuted in the Top 10 in over 30 countries on iTunes. BANKS has performed on such television shows as “Jimmy Kimmel Live!” “Late Night with Seth Meyers” and “Late Show with David Letterman.” Her songs have been heard in films (Divergent, The Longest Ride) and licensed by such television shows as “Grey’s Anatomy” and “Power.”

After building overwhelming anticipation, GRAMMY® nominated multiplatinum powerhouse trio–Jonas Brothers—announce the details for their 40-city Happiness Begins Tour this summer and fall with special guests Bebe Rexha and Jordan McGraw.  The announcement coincides with the launch of the pre-order for the band’s highly anticipated comeback album Happiness Begins, as well as the launch of their official merch store online today.

Produced by Live Nation, the “Happiness Begins Tour Presented by American Airlines and Mastercard” kicks off August 7th in Miami, FL and will make stops in Atlanta, Boston, New York, Chicago, Dallas and more before wrapping October 20th in Los Angeles, CA at the famous Hollywood Bowl. This marks the first headline tour for the Jonas Brothers in almost a decade.

American Airlines AAdvantage® Mastercard® credit card holders will be among the first to have access to tickets through an exclusive pre-sale beginning on Tuesday, May 7 at 10am local time. Cardholders will also have the chance to purchase the ultimate Jonas Brothers experience—from the best seats in the house, to early access and exclusive premiums. Cardholders may also get the unexpected, because when you use your Mastercard, you never know when you might get a Priceless Surprise. Tickets go on sale to the general public beginning Friday, May 10 at LiveNation.com.

“We’re so excited to announce this tour and get in front of our fans again! To kick things off we’ve partnered with   American Airlines and Mastercard to offer their cardholders special access and experiences throughout our tour. We can’t wait for everyone to see what we have planned!” – Jonas Brothers

The Jonas Brothers have also partnered with Ticketmaster’s Verified Fan platform to ensure tickets get in to the hands of their fans, not scalpers or bots. Fans can register now through Monday, May 6 at 10pm ET HERE for the Verified Fan presale. Registered fans who receive a code will have access to purchase tickets before the general public from Wednesday, May 8 at 10am local time through Thursday, May 9 at 10pm local time. Additionally, TIDAL subscribers will also have access to an exclusive presale beginning Thursday, May 10 at 10am local time through 10pm local time. TIDAL members can find details for purchasing  tickets on TIDAL.com/JonasBrothers or via the TIDAL mobile, web and desktop apps.

The Happiness Begins pre-order will include instant grat downloads of the band’s hit singles “Sucker” and “Cool,” produced by GRAMMY® Award-winning songwriter, producer, and lead singer of the multi-platinum band OneRepublic, Ryan Tedder. The third instant grat titled “Only Human,” produced by GRAMMY® Award-winning producer Shellback, will follow. Not only will this be the group’s first album since 2009, but it stands out as one of 2019’s most anticipated records.

These announcements set the stage for the boys to light up the Billboard Music Awards tonight with what promises to be a blockbuster performance. The band is expected to perform their first #1 hit at Top 40 radio “Sucker,” which has just clenched its second consecutive week at #1. Be sure to tune in to NBC at 8:00pm ET.  Next up, you can catch them on Saturday Night Live on May 11.

“Sucker” now exceeds 445 million global streams to date. During release week, it clinched #1 on Apple Music, #1 on Spotify, and #1 on iTunes in North America. Globally, it reached #1 on Apple Music, #1 on YouTube, #1 on Twitter, and #2 on Spotify, as well as the #1 Streaming Song and #1 Digital Song. Speaking of making history, the rollout of “Sucker” marked “the first time a band debuted at #1 on the Billboard Hot 100 chart this century.” Continuing the runaway success, “Cool” has notched 70 million global streams and soared to #1 on iTunes Overall Top Songs Chart and Top Music Videos Chart.

Single Is From His New Album, Glory Sound Prep

Today, Jon Bellion revealed the official video for his current single, “Stupid Deep.” The New York-based artist partnered with director Daniel Brown (ODESZA, Portugal. The Man) to weave a mythic tale of self-discovery that is set at sea. Bellion did all the visual effects himself. View “Stupid Deep”  HERE.

Bellion will launch an extensive North American amphitheater tour on June 12 at The Met in Philadelphia. The summer headline run, produced by Live Nation, will include a July 12 concert at Los Angeles’ Greek Theatre and an August 10 hometown show at Northwell Health at Jones Beach Theater on Long Island. See below for itinerary. Tickets are available here.

Glory Sound Prep is the follow-up to his RIAA Gold-certified 2016 debut album, The Human Condition, which has sold more than 1.5 million adjusted albums and amassed upwards of 1.7 billion cumulative streams. “All Time Low,” the lead single, was a Top 10 hit at Top 40 radio and is now certified 3x Platinum.

Bellion got his start with a series of mixtapes featuring his original songs all recorded in his parents’ basement. He built a remarkable following by sharing his music directly with listeners, giving away more than 200,000 free downloads of 2014’s The Definition and playing live for fans on two sold-out national tours. Also a sought-after collaborator, Bellion co-wrote and produced “Trumpets” for Jason Derulo and co-wrote the GRAMMY Award winning, 10x-Platinum hit “The Monster” for Eminem and Rihanna. He co-wrote and co-produced Christina Aguilera’s 2018 single, “Fall in Line” featuring Demi Lovato. 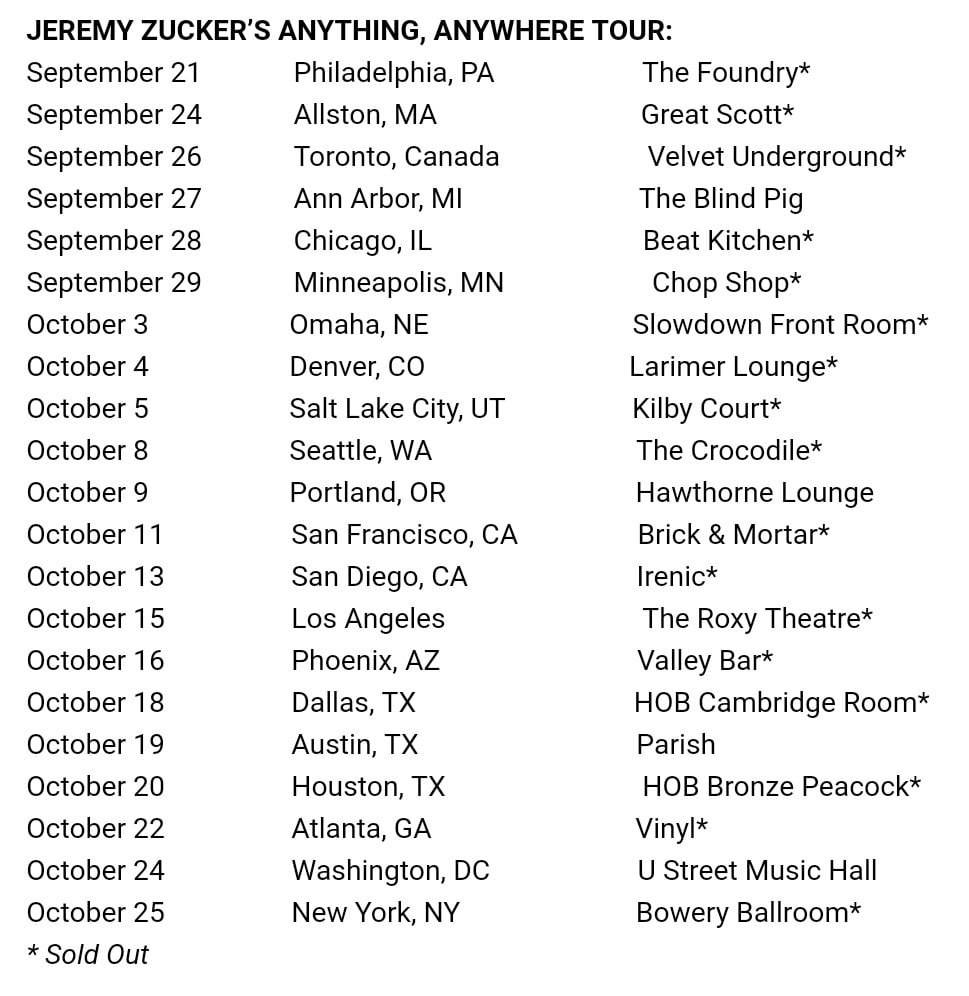