The Untitled Space is pleased to present “DEFINING FORM,” a group exhibition of contemporary artists exploring 2 and 3-dimensional sculpture opening on July 11, 2018 and on view through August 1st, 2018. Curated by Indira Cesarine, “DEFINING FORM” takes a comprehensive look at the manifestations of contemporary sculpture today, engaging a dialogue of the narratives resonating amongst sculptors through works in mediums such as metal, stone, clay, wood, glass, textiles, recycled and repurposed materials, as well as mixed media.

DEFINING FORM presents figurative and abstract works by over 50 emerging and established artists. The group show investigates progressive themes in sculpture, including contemporary feminism, gender identity and political art, as well as new technologies in digital sculpture, with an emphasis on originality and innovative usage of materials. Technological advances in fabrication and digital sculpture have had a massive impact on the art form over the past few decades. Classic techniques such as chiseling stone and casting in bronze have shifted towards new technologies such as 3-D printing, materials such as silicone, plastics, and textiles as well as found, recycled and re-purposed materials. The domination of large-scale works has given way to delicate and intimate pieces as well as a wave of sculptural installations that deconstruct notions of space and form. Artists are pushing the boundaries of the art form integrating components of sound, video, light and performance as well as painting, photography and other mediums.

As the art form evolves in new directions with the impact of contemporary culture, it has transcended from the conventional portrait to works that challenge the status quo, address gender identity and racial stereotypes, LGBTQ ideologies and queer constructs, explore themes of the resistance movement as well as progressive feminist narratives and activism. Exhibit DEFINING FORM presents the new narrative of sculpture with works that interrogate ideologies of the art form, pushing forward experimental works that engage all of our senses and ignite fresh dialogues.

“What is sculpture today? I invited artists of all genders and generations to present their most innovative 2 and 3-dimensional sculptures for consideration for DEFINING FORM. After reviewing more than 600 artworks, I selected sculptures by over 50 artists that reflect new tendencies in the art form. DEFINING FORM artists defy stereotypes with inventive works that tackle contemporary culture. Traditionally highly male dominated, I was inspired by the new wave of female sculptors making their mark with works engaging feminist narratives. The artworks in DEFINING FORM explode with new ideas, vibrant colors, and display a thoroughly modern sensibility through fearless explorations of the artists and unique usage of innovative materials ranging from fabric, plastic, and foam to re-purposed and found objects including chewing gum, trash and dirt. Recycled materials are celebrated along with works engaging new digital technologies. The exhibit displays works that are politically charged, contrasted with those full of satire and humor. In the investigation of new tendencies, I felt it was important to juxtapose figurative works with the abstract, new materials with the classics, creating an immersive exhibit that defines new trends in sculpture and contemporary constructs of the art form.” – Indira Cesarine

Critically acclaimed exhibition ONE YEAR OF RESISTANCE returns this April with a benefit auction hosted by ARTSY. Celebrate art for activism with works by more than 65 emerging and mid-career artists including Ann Lewis, Grace Graupe-Pillard, Rebecca Leveille, Michelle Pred, Indira Cesarine, Signe Pierce and Parker Day, among many others. Every work sold goes toward supporting the American Civil Liberties Union (ACLU) and its mission to defend and preserve the rights and liberties guaranteed by the constitution of the United States.

The ARTSY benefit auction features artwork across all mediums addressing the issues our society has been confronted with such as immigration rights, health care, reproductive rights, climate change, transgender rights, white supremacy, gender equality, gun control and more. It will additionally feature many new works by artists of the ONE YEAR OF RESISTANCE exhibition.

Bidding opened today at 12 noon and will close on April 19th at 5pm! Head over now to bid and help raise funds for the ALCU.

SELECT PRESS ON
“ONE YEAR OF RESISTANCE”

Vogue
“The Untitled Space Gallery Checks In With Nasty Women, One Year Later“

The Guardian
“One Year of Resistance: the exhibit chronicling the year in anti-Trump art”

ONE YEAR OF RESISTANCE

A Portion of Proceeds to Benefit ACLU Foundation

More events to be announced

This January, The Untitled Space gallery is pleased to present ONE YEAR OF RESISTANCE group exhibition, curated by gallery director and artist Indira Cesarine, featuring the work of more than 80 contemporary artists responding to the political climate in America since the election of President Donald Trump. Opening January 16th, and on view through February 4th, ONE YEAR OF RESISTANCE marks the one year anniversary of the inauguration of one of the most controversial presidents in American history. In a follow up to the gallery’s critically acclaimed group show “UPRISE / ANGRY WOMEN,” which opened during the week of the 2017 presidential inauguration, exhibition ONE YEAR OF RESISTANCE features artwork across all mediums addressing the issues our society has faced since the election such as immigration rights, women’s rights, transgender rights, health care, climate change, white supremacy, gender equality, gun control, sexual harassment, as well as countless other issues which have given rise to mass protest throughout the United States and abroad over the past year. ONE YEAR OF RESISTANCE celebrates art as activism, giving voices to contemporary artists from all backgrounds, ages and genders. Through works inspired by the controversial policies and practices of our current president, the exhibition sheds light on the challenging issues of contemporary culture in the face of the current presidential political agenda.

“This is an important time to reflect upon the last year and how Trump’s presidency has impacted our society. Since the election, we have been faced with extremes living in a country which has become increasingly divisive and threatening to civil and human rights. We live in a country facing sexism, racism and discrimination across all fronts. Last January, I was honored to partner with the ERA Coalition to present exhibition UPRISE / ANGRY WOMEN, one of the first exhibitions of the Resistance movement. Now, one year later, it is important to show continued solidarity in light of the issues our society continues to grapple with. It is impossible to sit back and watch as our rights crumble before our eyes. In the past year, our culture has dealt with continuous turmoil, mass shootings, increasingly disturbing accounts of gross sexual misconduct, threats to the rights of immigrants, reproductive rights, transgender rights, threats against our rights to health care, against gender and racial equality, against the protection of our environment, of internet neutrality, as well as attacks against Planned Parenthood, the EPA, the NEA and global organizations such as UNESCO. It is extremely disturbing that our cultural foundation is being rocked by the very platform that is meant to protect and serve our nation. The exhibition ONE YEAR OF RESISTANCE give voices to artists from all backgrounds, genders and ages in light of these controversial issues that have brought millions to the streets in protest. Throughout history, art has always played a significant role when it comes to representing the sentiments of the populace. It is crucial for the voices of the people to continue to be heard. The Untitled Space is honored to raise funds through this exhibition for the ACLU and support their mission to uphold civil rights and liberties in accordance to the constitution of the United States.”

ABOUT THE UNTITLED SPACE:

The Untitled Space is an art gallery located in Tribeca, New York in a landmark building on Lispenard Street. Founded in 2014 by Indira Cesarine, the gallery features an ongoing curation of exhibits of emerging and established contemporary artists exploring conceptual framework and boundary pushing ideology through mediums of painting, sculpture, printmaking, photography, video and performance art. The gallery is committing to exploring new ideas vis-à-vis traditional and new mediums and highlights a program of “Women in Art” as well as special events aligned with our creative vision 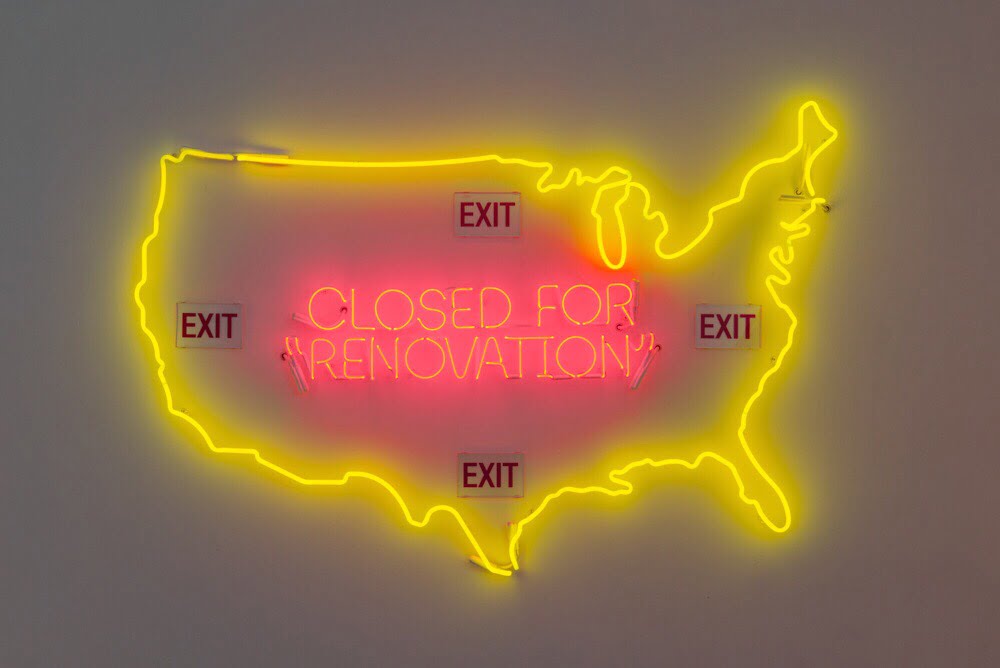