Boundary-pushing producer and artist, Tainy, and globally renowned artist J Balvin release “Agua,” the first single off of the official soundtrack from the upcoming animated film The SpongeBob Movie: Sponge On The Run. The song is out on NEON16/Interscope Records and available on all streaming platforms today.

The multiple Latin GRAMMY winning producer collaborated with J Balvin to create a song that captures the true essence of the beloved animated children show’s new feature film. The video which is set to release in the coming weeks, was directed by 36 Grados and filmed using the same cutting-edge animation seen in the film to help further bring to life the infectious beat created by Tainy that perfectly pairs with J Balvin’s signature silky smooth flow. The song further showcases Tainy’s incredibly skillful ability and talent as a producer and artist as he uses SpongeBob’s signature flute sound as the base for the beat of the track. Tainy then adds his unique style of sound to the track, cementing it as a certified summer anthem.

In the lyric video that is accompanying the song release today, we get a glimpse of SpongeBob and his best friend Patrick Star embarking on a journey to the Lost City of Atlantic City as J Balvin’s lyrics take us through the deep sea celebration.

Both Paramount Animation and Nickelodeon partnered with Tainy and Lex Borrero of NEON16 and Interscope Records to help them create a soundtrack that was innovative, bubbly and lively much like the title character of the animated film. The album is executive produced by the award-winning producing duo and was especially curated to help bring the film to life. The soundtrack will feature a strong collection of global artists from across different genres like Tyga, Swae Lee, Lil Mosey, Weezer, Snoop Dogg, The Flaming Lips, Kenny G., Cyndi Lauper and more. 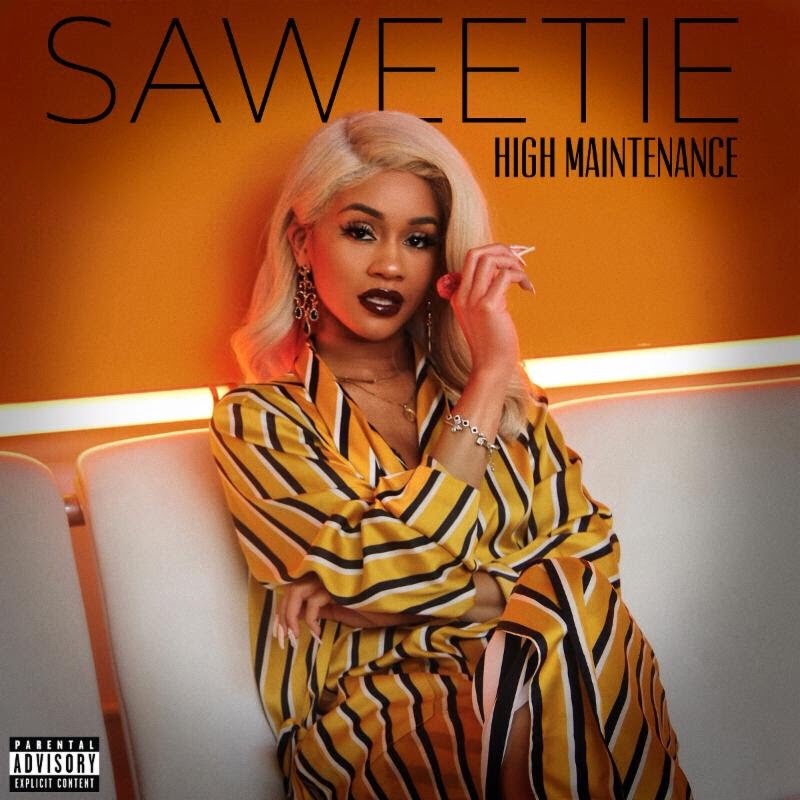 Building on widespread anticipation from fans everywhere, California rapper SAWEETIE uncovers her debut EP High Maintenance today via her own ICY label imprint in partnership with Artistry Worldwide and Warner Bros. Records. Not only does it include the runaway breakout hit ICY but it also boasts a total of eight new bangers from the MC. Get it HERE.

Check out the full track listing below.

Last week, SAWEETIE turned up with a fiery ANTIÉd; (Freestyle) music video originally premiered by Rap-Up. Cruising in a classic car, she unloads a barrage of rhyme fury in the grainy seventies-style clip. Prior to the arrival of the EP, she appeared in CR Fashion Book, and VIBE claimed, The fierce competitor is out to show listeners that women in rap don’t need to follow anyone’s blueprint. She’s living up to those words!

Featuring production from heavy hitters like Zaytoven and Cash Money AP, High Maintenance properly introduces SAWEETIE. From the infectious energy and deft wordplay of B.A.N. to a wavy send-offon the lush and lively Too Many, it highlights every facet of this formidable force.

To celebrate High Maintenance’s impact, SAWEETIE took the stage at The FADER Fort and both the Pandora and HipHopDX showcases at SXSW in Austin, TX and brought the house down.

High Maintenance and SAWEETIE are here to stay.

Flaunting nineties rhyme reverence, fashion-forward fire, and endless charisma, SAWEETIE born Diamont Harper can go bar-for-bar with the best of em. Drawing on a passion for poetry and numerous years of rapping in the car, she turned her love for words into vivid verses. Born in Santa Clara and raised in Sacramento, the California native attended USC. Initially, she deferred her rap dreams to achieve a degree in Communications before being discovered at a Downtown Los Angeles Puma event by current manager Max Gousse [Beyonce, YG, Ty Dolla $ign]. At Artistry Studios, she produced and recorded her 2017 knockout viral smash ICY GRL. Driven by a bulletproof flow and one clever line after another, it has racked up more than 18 million YouTube views and over 9 million Spotify streams and soared to #1 on Musical.ly. She also earned the early endorsement of gatekeepers such as Vibe, XXL, HipHopDX, and MTV. With a new partnership with Warner Bros. Records and Artistry Records for her label Icy, sheߣs rewriting the rule book and breaking the stereotype of the female emcee. Her forthcoming debut EP, features production courtesy of Zaytoven, Hassan, Saweetie, Cash Money AP, and Gousse. As a new CAA signee, she’ll be touring nationally throughout 2018.