TYGA, SWAE LEE, LIL MOSEY TEAM UP WITH TAINY & NEON16/INTERSCOPE RECORDS FOR “KRABBY STEP,” THE NEW SINGLE FROM
THE HIGHLY ANTICIPATED ANIMATED FILM
THE SPONGEBOB MOVIE:SPONGE ON THE RUN

Krabby Step is the second single off the official soundtrack, executive produced by the multimedia company

Three of the music industry’s most renowned rappers, Tyga, Swae Lee, and Lil Mosey have teamed up with Billboard Latin’s Producer of the Year, Tainy, to release the upcoming track and lyric video for “Krabby Step” off from the official soundtrack for the highly anticipated animated film The Spongebob Movie: Sponge On The Run by Paramount Animation and Nickelodeon.

The record was executive produced by Tainy, Albert Hype, and NEON16 and will be featured on the soundtrack that will be released in 2021 on NEON16/Interscope Records. The song is available to stream on all digital platforms today.

The single will follow in the footsteps of the commercially successful and debut track “Agua,” featuring Tainy and global sensation J Balvin, which charted on the #1 Hot Latin Song and #1 Latin Airplay lists and garnered over 923M total streams worldwide. The second single off of the official animated film soundtrack seeks to merge the indelible flows and cadences of three highly unique and original rappers with the infectious and unforgettable beats that Tainy has become known for over his lengthy musical career.

In the “Krabby Step,” we see Tyga, Swae Lee, and Lil Mosey create a strong and captivating story with lyrics that capture the true essence and playful vibe of the film. Tainy further demonstrates and cements his boundless talent as he curates a beat that will get fans across the globe dancing and is sure to break Tik Tok records — much like “Agua” did with the viral “Agua Challenge” (that accrued over 3.2M video creates on TikTok). The lyric video also uses the same cutting-edge animation seen in the animated film.

Paramount Animation and Nickelodeon have teamed up with NEON16 to produce the upcoming official album for the long-awaited animated film, The Spongebob Movie: Sponge On The Run. The soundtrack will include surefire hit songs from artists like Weezer, MonstaX, Snoop Dogg, The Flaming Lips, Kenny G, Cyndi Lauper and more. The Spongebob Movie: Sponge On The Run will debut digitally in the U.S via premium video on demand in early 2021 and then move exclusively to CBS All Access, ViacomCBS’ subscription video on demand and live-streaming service, following the premium video on demand window. The film can be viewed globally in all other countries, except China, on Netflix now.

HUMAN (X) was launched by Tommy Mottola, NEON16 and MITH Media in August with a goal of promoting humanitarian messages and generating revenue to be used for those in need.

Lex Borrero, the co-founder and CEO of NEON16, said, “We are thrilled to partner with Facebook and extend our purposeful initiative to its global audience. Human (X)  is rooted in elevating the myriad voices of those that are often unheard and we couldn’t think of a better audience to help us further amplify this cause.”

Mottola agreed, saying, “Music has always been a source of healing and bringing happiness and joy into people’s lives.. it also is a source of provocation and can motivate and inspire people to do great things and has been behind the most powerful movements in the world.”

To see the video for “Pa’ La Cultura,” you can click right here. 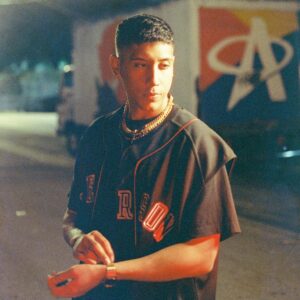 Colombian artist, singer and songwriter Dylan Fuentes is signed onto the NEON16/INTERSCOPE RECORDS talent incubator backed by award-winning producer and artist, Tainy, and President and CEO of NEON16, Lex Borrero.

With help from the innovative minds at NEON16, Dylan will continue to evolve as an artist and usher in a new sound for the Latin music genre with his natural charisma and unique skills as an actor, artist, songwriter and performer.

“The world has a lot of talent, but very few artists. Even less artists that can be creative in both music and film. Dylan is one of those few, I’m a fan and knew we had to sign him from the moment I met him.” comments Borrero on signing Fuentes.

Dylan has already showcased that he can hang with top Urban music talent when he joined Puerto Rican producer and hitmaker Tainy on his upcoming EP “The Kids That Grew Up On Reggaeton: Neon Tapes.” Dylan lent his vocals on EP focus track “Tu Amiga” alongside American reggaeton singer Justin Quiles, Puerto Rican reggaetonero Lennox, and fellow Colombian singer Llane.

In 2019, Dylan released the viral hit “Ajena” featuring Myke Towers, which counts with over 24 million views on Youtube and has accrued over 13,000,000 streams on Spotify.

His hit with Myke Towers, along with his role on the Netflix series “Siempre Bruja,” allowed Dylan to build and establish a strong and loyal fan base. Apart from playing a lead character, Dylan sang on the official show soundtrack. Through his work, he has been able to reach an audience of over 1.1 million Instagram followers, 1.03 million YouTube subscribers and 400,000 Spotify listeners.

As one of the first artists signed under the NEON16 banner, Dylan will be releasing his debut single “Bipolar,” which will be his first song off of his upcoming album. The 23-year-old will be working closely with NEON16 in 2020 to create music that will resonate with audiences globally.