Author Sheri Hunter’s new memoir, Daring to Live: How the Power of Sisterhood and Taking Risks Can Jump-Start Your Joy, is being made into a film: DeVon Franklin, the producer behind the drama Breakthrough (that made over $50 million worldwide in 2019), has signed on to produce the film adaptation of Daring to Live for Paramount Pictures (additional details here).

But don’t wait for the movie – increase your joy now with thispowerful, poignant memoir, available from Baker Books.

Elevated by the author’s sharp wit and gift for storytelling,Daring to Live details Sheri’s journey to conquer grief, loss and fear… a journey that includes best friends, skydiving, motorcycles – even climbing Kilimanjaro!

When her husband, Mannard, unexpectedly passed away at age 50, Sheri Hunter was devastated. With her whole world collapsing around her, she turned to her friends. Years before, she and these friends – the “Dare Divas” – had gone on a whitewater rafting trip. Now they sought out other adventures to help Sheri heal – ziplining, skydiving, mountain climbing, and more. Through these death-defying activities and the unwavering support of her friends, Sheri slowly found the strength to move forward in life.

“When I lost Mannard, I faced deep sorrow and shock, of course. But I distinctly remember that one feeling overshadowed all the others: supreme abandonment. This feeling was so permeating, it led me to question my place in life itself,” says Sheri in Daring to Live.

“Fortunately, the Dare Divas were there to pick me up, and strengthen my resolve and joy for life. Our dares took on a therapeutic role. As I reflected on each challenge, I saw thesedares were teaching me a series of life lessons for my new life without Mannard – and that it was possible to have a satisfying, fulfilling life again.”

This empowering travelogue pairs emotionally resonant, confessional storytelling with spiritual takeaways, challenging readers to engage fully in their own lives, surround themselves with friends who will support them, and face life’s challenges with courage and faith.

Read Daring to Live: How the Power of Sisterhood and Taking Risks Can Jump-Start Your Joy– no jump from of an airplane at 13,000 feet necessary! Then again, maybe that’s just what’s needed…

About the Author:  Sheri Hunter is a marketing professional who has served as a producer for Michigan’s national news affiliates, including CBS and NBC. She is a freelancer for several daily newspapers, including the Oakland Press, the Morning Sun News, and has been featured in MORE Magazine and National Geographic Traveler.

A popular keynote speaker, Sheri loves to show others that living outside of our comfort zones helps us discover amazing things about ourselves, even if those acts aren’t as extreme as jumping out of an airplane at 13,000 feet. Sheri lives in Michigan.

The video for ‘(I’m Gonna) Love Me Again’, a brand-new song written especially for ROCKETMAN by Elton John and Bernie Taupin, and performed by Elton and Taron Egerton, has today been unveiled. The glorious visuals give a vivid snapshot into Elton’s career, taking shots of Taron in the epic musical fantasy ROCKETMAN, intercut with archive live footage, 70’s psychedelic animation, iconic album artwork and gig posters to transport you back to his hedonistic heyday. Directed by Los Angeles artist Kii Arens, the video is a perfect accompaniment to the gloriously uptempo, soulful stomper of a track, which plays over the movie’s credits. The video premiered today on MTVU and MTV Live and can be seen throughout the day. Watch the clip here.

The song is taken from ‘Rocketman: Music From The Motion Picture’ (out now on Interscope Records), which sees celebrated producer and composer Giles Martin re-interpreting and re-imagining Elton’s iconic hits, tailoring the music specifically to support the narrative of the major motion picture, with a truly show stopping vocal performance from ROCKETMAN lead actor Taron Egerton. ‘(I’m Gonna) Love Me Again’ is co-produced by Giles Martin and Greg Kurstin. ‘Rocketman: Music From The Motion Picture’ is available now.

Tasked with taking Elton’s unparalleled back catalogue and reimagining it to fit the film’s narrative, ‘Rocketman: Music From The Motion Picture’ producer Giles Martin worked closely with the filmmakers, supervising all of the music for the production and pulling a vocal masterclass from Taron in the studio. From transforming ‘Saturday Night’s Alright for Fighting’ into an epic ensemble piece, to morphing ‘I Want Love’ into a heart-breaking moment of conflict around little Reggie’s family meal, each track has been sculpted to form a unique part of the narrative of this most incredible of stories. The album is produced by Giles Martin (except ‘(I’m Gonna) Love Me Again’ co-produced by Giles Martin and Greg Kurstin) and was recorded between 2017 and 2019 at Abbey Road Studios and AIR Studios in London. Executive Album Producers are Elton John, David Furnish, Matthew Vaughn and Dexter Fletcher.

‘Rocketman: Music From The Motion Picture’ is out now on Interscope Records

1.The Bitch Is Back (Introduction)

4. Thank You For All Your Loving

19. Sorry Seems To Be The Hardest Word 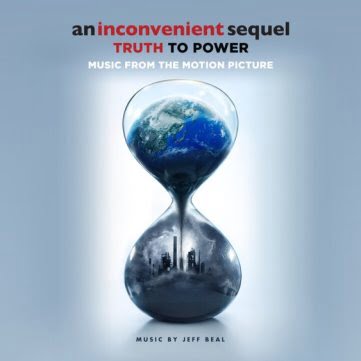 “The opportunity to help tell this next chapter of Al Gore’s unstoppable resolve to protect our home planet’s health was a great honor for me,” says composer Jeff Beal. “Directors Bonni Cohen and Jon Shenk have made a truly personal and powerful film; it’s a call to move beyond politics towards hope and solutions we can all embrace. I hope this music will inspire us all to our better selves and to do the right thing for mother earth.”

Paramount Pictures and Participant Media present an Actual Films Production of “An Inconvenient Sequel: Truth To Power.” A decade after AN INCONVENIENT TRUTH brought climate change into the heart of popular culture comes the riveting and rousing follow-up that shows just how close we are to a real energy revolution. Vice President Al Gore continues his tireless fight traveling around the world training an army of climate champions and influencing international climate policy. Cameras follow him behind the scenes – in moments both private and public, funny and poignant — as he pursues the inspirational idea that while the stakes have never been higher, the perils of climate change can be overcome with human ingenuity and passion.

The track-listing for An Inconvenient Sequel: Truth To Power (Music From The Motion Picture) is as follows:
Ten Years Later (Main Title Theme)

Man On A Mission

Two Feet At A Time

Provide For Their People

Truth To Power by OneRepublic

An Inconvenient Sequel: Truth To Power (Music From The Motion Picture)