Thursday sees the launch of the Enjoy & Respect campaign, which brings home the message to Dutch and British people aged 18 to 34 that offensive behaviour will not be tolerated in Amsterdam. This target group frequently visit Amsterdam at weekends to party, drink, go on pub crawls and hold bachelor parties. All too often, the result is drunkenness, noise in the street, litter, and public urination. As surveys on quality of life in Amsterdam have shown, this is a serious source of nuisance to residents, local businesspeople, and other visitors. The Enjoy & Respect campaign aims to inform the target group of the consequences of this kind of behaviour, and raise awareness of what is allowed and – more importantly – what is not allowed in Amsterdam. The campaign was initiated by Amsterdam Marketing, and developed in collaboration with Amsterdam city council and other stakeholders.

A high price for bad behaviour

Amsterdam is famous as an open, creative, innovative and tolerant city, where the limits of what is allowed are wide. The city has an international reputation for freedom – the freedom to be who you are, believe what you like, and say what you think. But this freedom depends on a crucial precondition: mutual respect. And respect is often precisely what is lacking among the specific target group that causes trouble.

“We take the growing aversion to this group of visitors very seriously,” says Frans van der Avert, director of Amsterdam Marketing and initiator of the Enjoy & Respect campaign. “The group is only a source of nuisance and hardly offers anything positive to our city. Certain areas of the city have become difficult to live in, and everyone loses out.”

The campaign focuses on four kinds of behaviour that cause the most trouble: drunkenness in public spaces, noise, littering, and public urination. Where city guards or the police catch people committing these offences, they are immediately issued with substantial fines.

The key message of the campaign is that everybody is welcome in Amsterdam provided they behave appropriately. You can enjoy your freedom, as long as you respect the city and its residents. If you fail to show the necessary respect, you face a hefty fine.

The Enjoy & Respect campaign has deliberately taken a creative approach, taking freedom of choice as its core theme. To communicate a message effectively, it is vital to make contact with the target group, and research has shown that a patronising approach only has a negative effect on the target groups that tend to misbehave, especially when drunk. The best way to raise their awareness of what is and isn’t allowed in Amsterdam is therefore to take an original and creative approach. At the same time, members of this young target group are generally on a budget, and are very sensitive to fines.

Who are the target group?

Research has shown that greatest nuisance is caused by men aged between 18 and 34, often in groups, from the Netherlands and the UK. They visit Amsterdam with only one purpose in mind: to go wild and party all night. Their rowdy behaviour is a nuisance to many other people. A growing number of Amsterdam residents have made it clear that they have had more than enough of it, and justifiably so, says Frans van der Avert:

“More and more residents, public authorities, politicians and local businesspeople in our network no longer accept this behaviour. This is why we took the initiative to set up this campaign, which is quite a challenge. It’s not enough just to show a fun video or put up signs saying that things are prohibited. The approach needs to be appropriate to Amsterdam, and hit a nerve. What we have created is a campaign that tackles the problem without running counter to Amsterdam’s distinctive character. Everybody is free to choose, but if you choose to be a public nuisance, you have to pay for it. For this group, money is very important, and this is how you hit them.”

Agency and media use

Amsterdam Marketing developed the campaign in collaboration with Wavemaker, an agency with expertise in media and content production, and a wide knowledge of and experience with the target group. The visitors who cause public nuisance are sober when they are planning their visit, and on the whole, they are cooperative when they are boarding the plane and during their stay. The campaign targets the audience at all these specific points, from searching online, to booking the trip, to the reception desk at the hotel or hostel, and also at breakfast, in pubs, in the red-light district, and the Rembrandtplein and Leidseplein nightlife areas.

The campaign is available to the target group online all year round, and is targeted in the city centre by means of geofencing. As soon as a member of the target group enters the red-light district, Rembrandtplein, Leidseplein or the area around Amsterdam CS, they will receive content and messages via social media. At the same time, responses will be made to social media posts by troublemakers in consultation with the Amsterdam police.

The ultimate aim is to reduce public nuisance. Changing people’s behaviour takes time and demands patience, but everything starts with awareness of the issues, and this campaign is the starting point.

Pim Evers, Amsterdam chairman of the hotel and catering trade association Koninklijke Horeca Nederland, explains that his organisation has been involved from the start:

‘In consultation with the police, residents, local businesses, transport companies and representatives from the tourist sector, such as the Rijksmuseum and the Van Gogh Museum, we have contributed to ideas on content, visuals, situations and follow-up actions. Ultimately, we all benefit from a good living environment and a positive, sustainable image, so in future we will continue to appeal to enthusiastic visitors who specifically choose to come to Amsterdam. Target groups that harm this image should be addressed, and that’s precisely what this campaign does.’

The campaign is financed by Amsterdam Marketing, the City of Amsterdam and the commercial sector: Schiphol, the Rijksmuseum, the Van Gogh Museum, Koninklijke Horeca Nederland (Amsterdam division), the Oudezijds Achterburgwal business association, and the local campsites. The local transport company GVB and the outdoor advertising company JC Decaux are making media space available. This shared responsibility emphasises how important it is to cooperate to make sure that Amsterdam remains a pleasant place to live, with a positive reputation.

The campaign content was presented to residents, local business people in the city centre, and an umbrella representation of the tourist, hotel, bar and restaurant sectors. British Embassy representatives also participated. The City of Amsterdam and the police are closely involved in developing, implementing and following up the ideas.

Putting a stop to bad behaviour: a lot is allowed in Amsterdam – but not everything

Edwin Schölvinck, a member of the residents’ discussion group Binnenstad Offensief, is positive about raising awareness among the target group that Amsterdam is not simply a free-for-all:

“A lot of people will claim that law enforcement to curb this behaviour is the only means to achieve the desired result. This is partly true, of course. But it all starts with the realisation that not everything is allowed here. That’s what this campaign is about. There are also restrictions in Amsterdam. We are very pleased with this initiative in our city. You have to start somewhere to put a stop to the bad behaviour.”

The campaign was presented to the various stakeholders, and extensively pre-tested with the target group, says Rogier Leliveld, Managing Director of Wavemaker:

“It was clear from the very start how important the right tone of voice and visuals are for this campaign. It’s crucial to the interest and commitment of the city and its residents.

That’s why we closely collaborated with Amsterdam Marketing and its partners while developing the campaign. We also tested the content among the target group to make sure that we don’t use the wrong tone of voice, or that we simply fail to reach them, despite our know-how and our good intentions. Based on our expertise in developing content, our experience with the target groups, and the test results, we knew that we had to design a straightforward and transparent campaign, so that the target group can understand the message at a glance. We believe that the campaign’s simplicity is also its strength.”

The promotional material will be monitored during the course of the campaign, and a study will be conducted to assess whether the media are sufficiently reaching the target groups. Qualitative evaluations over the next few months should also indicate whether the target group are recognising and responding to the message. 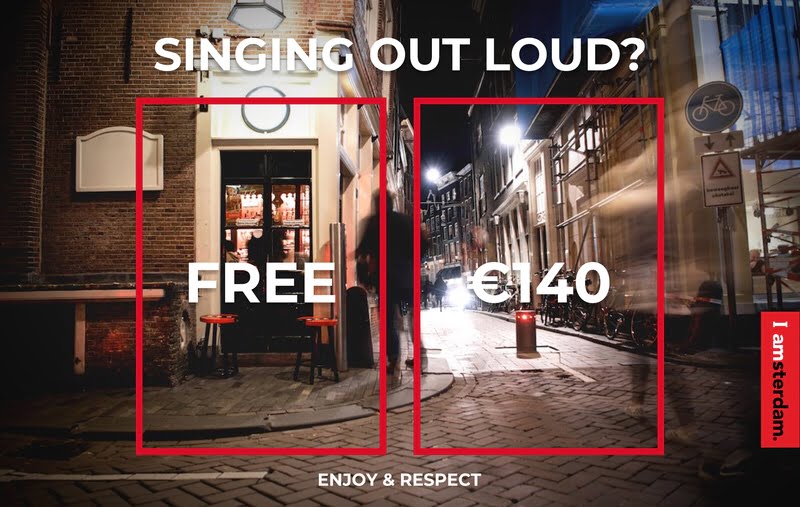 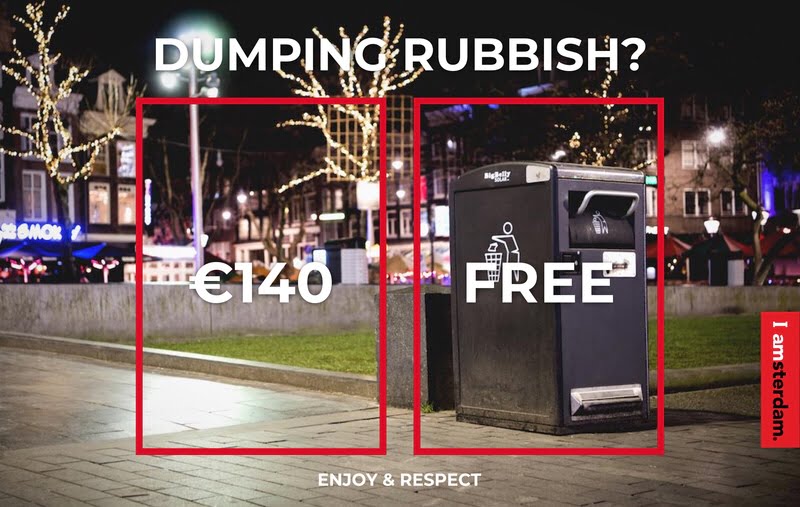 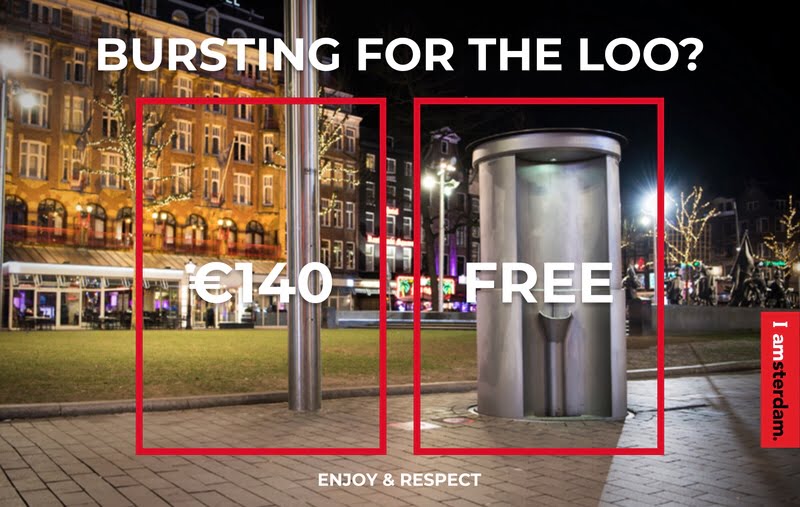 Minimalism is all the rage at the moment thanks to writers like Fumio Sasaki, so why not apply that approach when planning your next vacation? There’s so much information out there that it can seem overwhelming when you start researching places to go, with so many offers, travel guides, blogs, photos, videos, podcasts and all the rest. Sometimes you just need to drown out the noise and focus on what’s important.

That’s why Expedia has created these minimalist travel posters to help you see the essential elements on 14 of the top vacation destinations in the world. They’ve picked out the most important aspects of each destination, namely where you should go first, what food you should eat and where you can get that one stunning and shareable photo for your Instagram or Facebook page.

If you go to Berlin, for example, a whistlestop tour using these posters would take you to the aptly-named Panoramapunkt for a panoramic view of the TV Tower, followed by a trip to the past at the historic Brandenburg Gate. For food options, currywurst is a spicy taste of Berlin life and culture, while you can finish your stay with an energetic and symbolic bike ride down the Mauerweg, which follows the route of the old Berlin Wall.

Swapping Germany for South Africa, Cape Town has plenty to offer, even in the snapshot form of a minimalist visit. Speaking of snapshots, Bloubergstrand is the place to go to get that iconic photo of Table Mountain while you’ll also want to keep your camera to hand when you’re at Boulders Beach so you can get a shot of the penguins. Yes, there really are penguins there. The Neighbourgoods Market in Woodstock is a good place to get souvenirs, while the recommended dish of the trip is potjiekos, a traditional meat stew.

As you’ll have seen from these two examples, there’s so much you can fit into even a minimalist travel poster if the destination is as exciting as Berlin or Cape Town. Others getting the minimalist treatment include Havana, London, Paris and even the Serengeti and Siam Reap, the Cambodian home of 800-year-old temple Angkor Wat. You can probably guess what the iconic photo from that trip would be.

So check out all 14 of these minimalist travel posters from Expedia and see which of the legendary destinations captures your imagination. Given that you can take in all the sights in just one day, you could even do a tour…