The eight-song set illuminates her penchant for slick, sharp, smart, and soulful urban/R&B music. Punctuated by her strong female voice of empowerment, and brutally honest, truly self-aware lyrics, Kiana’s EP is a warning shot that a new star is on the rise. Among its tracklisting, the EP boasts her radio single “Fairplay” [feat. A$AP Ferg]— Which has already garnered over 10 million streams.

Meanwhile, she teams up with label mate Blackway for the instantly infectious “Shame.” Produced by Rice N Peas (Bazzi “Mine”) “Wicked Games,” takes flight on her dynamic delivery over cinematic and stunning production that is reminiscent at once of both The Weeknd and Maxwell. It’s a great way to get to know KIANA. “Show Love,” produced by 7 time Grammy Winning producer/Engineer/writer DURO, is a bouncy modern R&B Jam with slick word-play and a super catchy hook calling on her man to at least “show up and show love.”

This past year is shaping up to be her major breakthrough moment as a musical force. She contributed “Big Spender” (co-written with label mate “Amine” to the chart-dominating Official Soundtrack for 50 Shades Freed, and it clocked over 10 million Spotify streams. Additionally, she garnered widespread praise from Refinery29, Baeble Music, Complex, stupidDOPE, is and more.

Now, Selfless positions her for big things on the horizon.

After spending years quietly developing her skills as a songwriter and singer, KIANA became a veritable sensation.  To date, she has generated 50 million-plus views across her YouTube/Vevo channels. In addition to her music, she recently landed a co-starring role on Rev Run’s new Netflix series set to air in 2018 and starred in season 2 of MTV’s hit show “Scream”.

Yesterday, 18-year-old Jadagrace exclusively premiered the official music video for her buzzing new single “My Rules” on Refinery29. About the song, Refinery29 writes,“QUOTE.“

Weaving together an eye-catching narrative, the cinematic visual perfectly complements the single’s swinging groove, sultry soul, and empowering message. It adds another dimension to “My Rules”and illuminates the multi-faceted power of Jadagrace.

It’s a big day for the songstress as she also releases the “My Rules” – Remix Bundle at all digital retailers via Capitol Music Group. Get it HERE.

Sought-after remixer Colin Callahan expands the sonic palette of the original with the dance floor-ready energy of the “Future House Remix” and “Future Bass Remix.” Jadagrace‘s music seamlessly steps into a new arena altogether with these remixes.

Right now, the artist is hard at work on her full-length debut-due out in 2018. Stay tuned for more news soon.

Updating timeless Motown soul with 21st century sass, Jadagrace arrived with a style of her own on 2017’s My Rules EP. Straight out of the gate, she earned the praise of Pop Crush, Just Jared, Jr., The Daily Shuffle, and more. Quietly building a buzz, she brings a new groove to pop music. Simultaneously, she stands out as an unforgettable presence on-screen whose credits span everything fromTerminator: Salvation alongside Christian Bale and her television series, The Jadagrace Show. During 2016, she also found herself in good company alongside Kelly Clarkson, Chloe x Halle, Missy Elliott, Lea Michele, Janelle Monáe, Kelly Rowland and Zendaya on “This Is For My Girls,” the anthem for Michelle Obama‘s “Let Girls Learn” initiative.

For more information on JADAGRACE, visit

On the video Molly Sides noted: “Making a music video is like adding the missing ingredient to a sonic recipe. ‘Speed Queen’ is a high octane rebellious story of desire; an aural vision and a labor of love. The energy behind the scenes was intoxicating and we hope that everyone who watches feels and tastes the wild concoction that is ‘Speed Queen.’ And may even want to join the journey of these rebels.”

The video, which premiered on Refinery 29, begins under the red hot Sedona, Arizona sun (as the first line states), where a hyper-charged narrative unfolds as the drifter played by Whitney Petty meets the “Speed Queen,” played by Molly Sides. It mixes rock-n-roll, leather, bar fights, and an epic love story all wrapped to make one killer video.
“Speed Queen” produced by Sylvia Massy [Johnny Cash, Tool] is the first of the band’s string of new music coming soon. Check out “Speed Queen” Here! Stay tuned for a whole lot more…

Thunderpussy. If Thor’s Hammer of the Gods from “Immigrant Song” landed in the hands of four wise, willful, and wild women? Well, it would sound something like Thunderpussy. The quartet—Molly Sides [vocals], Whitney Petty [guitar], Leah Julius[bass], and Ruby Dunphy [drums]—do the most rock ‘n’ roll thing possible and quite literally fuck up every rock ‘n’ roll stereotype you know to be true, piercing the halls of Valhalla in the process. The Seattle-based group turned into a quiet phenomenon with the endorsement of Rolling Stone and Pearl Jam guitarist Mike McCready as well as a string of already legendary performances under their high-waisted belts. Look out for more music from Thunderpussy soon!

ABOUT STARDOG RECORDS
Stardog Records was created by PolyGram Records in 1989 exclusively an imprint for Seattle glam-rock ​act Mother Love Bone and the group’s releases with subsidiary Mercury Records. The ​label’s ​name is a nod to​ the​ Mother Love Bone​ song​ “Stardog Champion.” In partnership with Republic Records, Stardog Records was revitalized in 2016. Picking up where history left off, Stardog released the official soundtrack for Showtime’s Roadies and recently signed Seattle rock band Thunderpussy.

HEADLINE PERFORMANCE ON 9/13 AT FREEHOLD BROOKLYN

DEBUT EP DUE THIS FALL 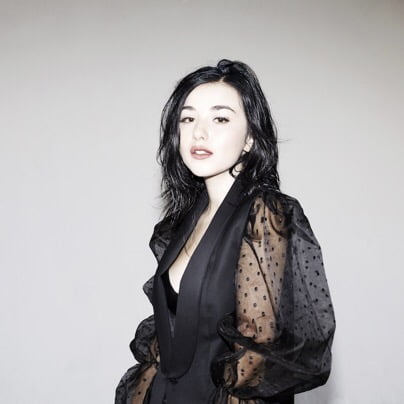 Co-directed by Antony Langdon (member/vocalist of the band Spacehog) and EZI, as well as conceptualized by both, the video takes the viewer down the rabbit hole into a modern-day, but vacant ‘wonderland.’ “I wanted to create a world that felt like my mind at the time of writing ’Redemption,’ says EZI. “A place that is dark and that often I get lost in. In the video, I’m going on an adventure where I’m both running away and towards something. I’m running from a part of myself or from a state of mind. Ultimately the message of the song is to embrace your vulnerability, because it’s our vulnerability and darkness that allows us see the light and beauty that does exist.” Fans can also get a behind-the-scenes look at the making of the video HERE.

EZI will also make her festival debut at Philadelphia’s Made in America festival, this Saturday, 9/2, performing with frequent collaborator, DJ/Producer, Kap Slap, as well as at Kaaboo Festival in San Diego 9/15. EZI will also headline FREEHOLD Brooklyn on 9/13 (8pm Doors/9:30pm Performance. Fans can enter to win a pair of tickets to Made in America (Saturday only) or attend the 9/13 performance in Brooklyn, NY for FREE, by heading over to www.eziofficial.com and signing up for the EZI mailing list.

Upon the audio release and debut of “REDEMPTION,” Nylon Magazine urged listeners to “press play and twirl to your own broken-hearted fantasy” and described it as “playful, sad, and made for warm summer nights.” Listen HERE. Billboard Magazine hailed “the minimalist pop jam stands as a perfect introduction to EZI, who used a low moment last year to empower herself and accept ‘all I’ve got’ as the chorus touts.”

The Long Island, New York native wrote the song in August 2016, during one of the lowest points in her life. On hiatus from Nickelodeon’s The Other Kingdom, which she starred in for its one on-air season, EZI bought a one-way ticket to Los Angeles to focus on her music career for a few months (EZI grew up acting, dancing, and singing). But when she arrived in the City of Angels earlier that summer, she found herself at an unexpected crossroads.

“I’ve always struggled with depression,” EZI says. “I’m a very emotional person. [When I wrote “REDEMPTION”], I was living alone in Hollywood, my schedule was all over the place, I was going through some stuff personally … but more than that, I don’t even know what triggered it—I was honestly so lost, so detached, so removed from myself. Most people actually think [the song] is about a relationship [with another person], but it’s actually about the relationship I have with myself. You wake up loving yourself, you wake up hating yourself, [or] being upset or disappointed.

Fans can expect the debut EP from EZI this coming fall!

Feinberg whose company 8spoke, consults for Madden’s brands on music/culture, has been working with Steve Madden on all brand music endeavors for the last 5 years. With the continuing success and the consistent growth of the Steve Madden Music platform, the two Steve’s decided they wanted to get even closer to the music and the artists… and 5Towns Records was born.

Feinberg’s achievements as a former artist manager, that discovered and managed multi-platinum artist Good Charlotte and worked with a dozen more including, Flight of The Conchords and My Morning Jacket, his work with the major labels, publishers and distribution groups to curate music programs while establishing artist/brand relationships, lead them to create this exciting new venture.

Seeing the industry change incredibly in the past few years, 5Towns considers itself a new label for the new age. Now that brands have become a bigger, more important and more accepted part of the music world, 5TR is in a unique position to help artist be heard AND seen.

Unlike most companies, Steve Madden is not only a brand but a real person, a fan who LOVES music and wants to be an integral part of discovering, working with and developing artists. 5Towns is part of the creation of a whole new version of the industry. While there has been a lot of “artist vs label” sentiment lately, 5TR is uniquely positioned to be artist driven and artist centered. 5TR can alleviate great deal of that skepticism as an independent label with its own funding, but unlike most indie labels out there…they have the ability to utilize the incredible brand association potential (when necessary) to completely separating themselves (when appropriate). 5Towns is in a positively uncommon position. The label will be positioned unique to every artist signed to 5Towns. 5TR seeks to build a stable of artists who are proud of their label. In a cynical time, bookended by tales of corporate overreach, 5TR is a label artists can turn to, knowing their message will be heard and their vision will be supported. 5Towns Records is where passion, hard work, vision, talent, music and ambition meet.