Antonio Brown, who is now the CEO of LVL XIII (pronounced “Level 13”) — a luxury footwear and apparel line. He went this direction after being laid off in his former accountant role at a luxury doll manufacturer, the Alexander Doll Company. He started the company by simply googling, “how to create a sneaker brand.”

To date – his luxury brand signed a $1.5 million deal with Zhu Jiang, owner of Décor Apparel, which is the leading manufacturer of apparel and accessories in the world and also has current partnerships & clients such as SAKS Fifth Avenue,Nike, Target, Zara, Cole Haan, Converse, GAP, and many more. That deal also includes financial backing by international pop star and fashion icon, Jason Derulo (who has also made headlines as the brand’s ambassador).

On top of this, he is an ACTIVE philanthropist! We would love for you to highlight him and/or his brands in any stories that you are working on! 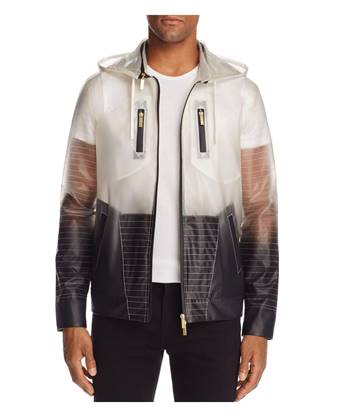 Currently, the apparel is sold nationally in both Bloomingdale’s and Nordstrom. The brand is geared towards the affluent fashion male consumer between the age of 17-35 with an income in excess of $100K. 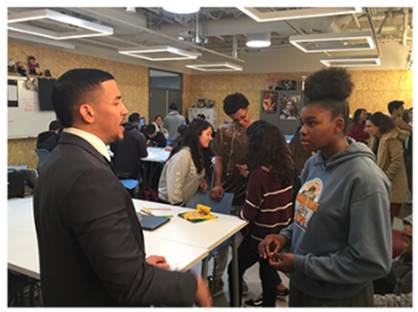 His Small Business Entrepreneurship Program, licensed by The Art Institutes, is now a required course in all of the nonprofit institution’s degree programs. Program resources will reach 30,000historically underrepresented students in 30 colleges nationwide in 2018-2019, cultivating thousands of small business owners with access to incubator program capital to fund their dreams.

Antonio Brown was introduced to the world of entertainment through his unreleased memoir entitled, Muted Dreams. It was dubbed the male version of Push by Ebony Magazine which secured him tons of followers on social media.

However, it wasn’t until Brown left his position at The Alexander Doll Company and began to embark on a fashion and philanthropic dream. The vision commenced with the birth of LVL XIII (Level 13) –  a luxury men’s fashion label which launched a line of top-tier sneakers.

The initial accomplishments of the brand sparked interest from international superstar, Jason Derulo, whom now serves as Brand Ambassador and Key Investor of LVL XIII. Together they expanded its portfolio and added LVL XIII APPAREL, catering to affluent male millennials.

As a humanitarian, Brown spends his time educating and supporting abused youth and giving back to the community through on-site activations and monetary donations. In the past, he’s coordinated various celebrity fashion shows focused on the fight against HIV/AIDS. Many of them were hosted by Angela Simmons, Nene Leakes, K. Michelle and Ro James.

Through these engagements, Brown has made notable contributions to both amfAR (a leading organization dedicated to the support of HIV/AIDS research) in the amount of $10,000 and Hero for Children (a non-profit dedicated to improving the quality of life for children infected with and impacted by HIV/AIDS) in the amount of $5,000 – establishing The Antonio Brown Scholarship which contributes to the organization’s summer camp.

*In 2016, LVL XIII made national headlines when it debuted new apparel and footwear during NYFW at Pier59 Studios. 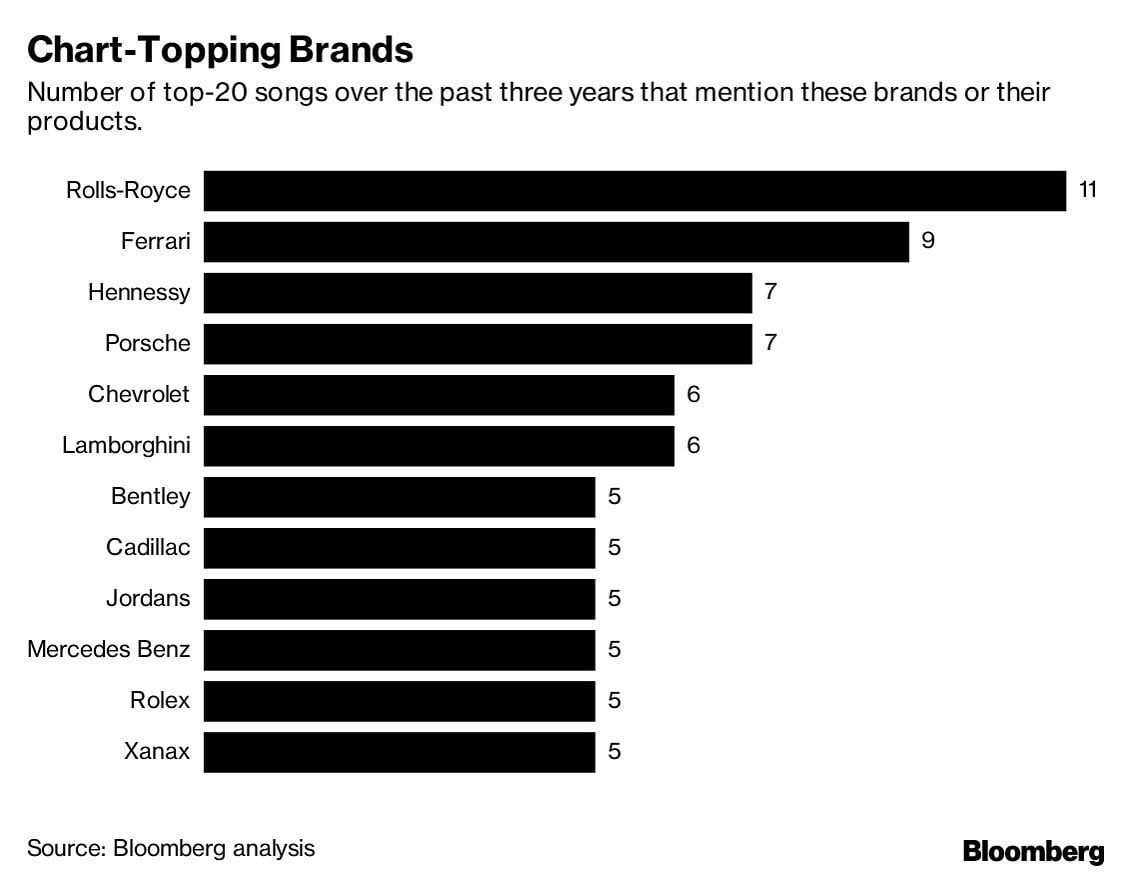 Rolls-Royce tops the list, featured in 11 different tunes by such artists as Future, The Weeknd, and Kodak Black. Ferrari is a close second. Chevrolet, Lamborghini, Bentley, Cadillac, Mercedes-Benz, and Porsche each get touts in several songs. Among non-car shout-outs, old standbys Hennessy cognac and Nike’s Air Jordan sneaker label got the most. We also found that it’s not just alcohol, guns, clothing, and super luxury making it into songs anymore—software, cookware, and even Band-Aids are making the grade.

As far as the song including the most name-checks, the crown goes to “Bad and Boujee” by hip-hop group Migos, which climbed all the way to the No. 1 spot on the charts early this year. It includes 19 brand mentions, from Instagram and Klout to Segway scooters and, um, Crock-Pot slow cookers. Car references are sprinkled throughout the song, too. They rap about a “lamb” and a “frog,” nods to Lamborghini and Porsche. There’s also a reference to the Ferrari 458 Spider, a drop-top convertible that costs more than a quarter-million dollars. The Rolls-Royce Ghost gets some attention as well.

The obvious question when musicians mention obscure brands is, are they getting paid? Sometimes they do. As with television shows and feature films, brands like to insert themselves into pop culture, and music is no different. Dozens of music videos show off stuff from Beats, the Jimmy Iovine/Dr. Dre headphones brand owned by Apple Inc. The item appears in several of Lady Gaga’s music videos, from her breakout hit “Just Dance” to “Poker Face” and “Telephone.” Beats Pill speakers, meanwhile, are clearly visible in videos from Britney Spears, Miley Cyrus, and Nicki Minaj.

It’s often unclear what’s a paid placement and what’s not, however, since artists generally don’t disclose the deals. No, Drake wasn’t paid by Rolls-Royce to include the Wraith in “Portland,” or its bigger and pricier cousin, the Phantom, in “Jumpman,” according to the manufacturer. But Chris Brown’s 2008 hit “Forever,” which featured the line “double your pleasure,” turned out to be an extended version of a chewing gum jingle for Wrigley’s Doublemint. 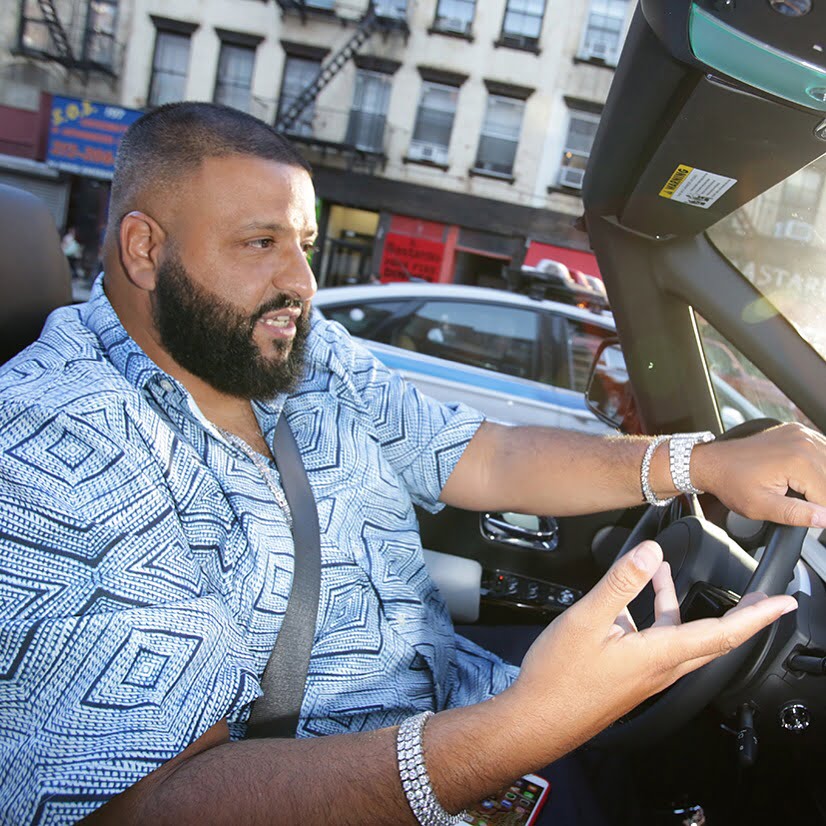 There’s a middle ground, however. Rolls-Royce, for example, will sometimes provide cars to be featured in music videos, said company spokesman Gerry Spahn. When someone uses the car as a shorthand for luxury, it helps the brand, he said. And besides, celebrities and musicians make up about 20 percent of the automaker’s customers, so it has the potential to be a sales strategy, too.

The $400,000 Phantom is Rolls-Royce’s signature vehicle, but the company has attracted much hype for three other models it’s released since 2009: the Ghost, Wraith, and Dawn. All have garnered song mentions, with the Wraith topping the tally with four.
While parent company BMW AG keeps close tabs on the Rolls-Royce brand, Spahn said they’re more than happy for the exposure. Last year, Rolls-Royce had its second-highest sales numbers ever, delivering more than 4,000 cars to wealthy customers around the world. Even if the car’s desirability increased, production constraints limit the company to a maximum of 6,000 cars a year, said a person with knowledge of its operations.