Made in Lagos will not only engulf listeners in the unique sounds, live instrumentation and vibes of Lagos, but will celebrate Wizkid’s love and appreciation for where he comes from and his inspirational journey with standout tracks such as “Blessed” and “Reckless.” The 14-track project includes features from an incredible group of chart-topping artists – Burna Boy, Skepta, Damian Marley, H.E.R. Ella Mai and Starboy Entertainment’s youngest signee Terri.

Originally scheduled for release on October 15, Wizkid dedicates the project to the citizens of Nigeria in light of the police brutality occurring in his beloved country. “It has been beautiful to see Nigerians around the world coming together to protest against police brutality,” says Wizkid.  “Unity is key. The youth of Nigeria need our collective voices to continue to shine a spotlight to what is happening inside the country. I want to play my part in this and in the movement for a better Nigeria, a better place to live for ourselves, our families – our communities. We will get through this together. Together we move. #endSARS.”

Stream Made in Lagos

Today, Nigerian singer-songwriter Wizkid shares his provocative new single “No Stress,” the latest release from the reigning global Afropop superstar. The track will be featured on his eagerly anticipated project Made In Lagos, set for an October 15 release via Starboy/RCA Records/Sony Music International and available for pre-order/pre-save now.

Click here to listen to “No Stress” and pre-order/pre-save Made In Lagos.

Producer P2J provides the swaying rhythm on “No Stress” while Wizkid chronicles a specific type of situationship for a woman that “got her own, but needs some love.” The track is the follow up to previously released gem, “Smile” featuring multi-Grammy Award winner H.E.R., described as “an infusion of Afro, Soul, and reggae to come up with a unique sound” by Daily New Hip Hop.

Both songs are the latest offering from Wizkid’s fourth full-length studio project Made In Lagos, which will not only engulf listeners in the unique sounds, live instrumentation and vibes of Lagos, but will celebrate Wizkid’s appreciation for where he comes from and his inspirational journey.

In addition to music, Wizkid continues to be omnipresent across multiple endeavors. Last October, Wizkid relaunched his indoor Starboy Fest, which sold out the o2 Arena for the second year in a row and included new territories in Europe (Manchester & Paris), and this May he refocused his energy on his Starboy Entertainment imprint in Africa by executive producing the “Afro Series,” the debut EP from Terri, the youngest artist on the roster. With significant partnerships with brands such as Tecno Mobile, CIROC, Nike, and United Bank of Africa, Wizkid has solidified himself as a millennial pioneer for African entertainment and business of lasting global impact.

Stay tuned for more information on Wizkid’s Made In Lagos.

The Weeknd has donated $500,000 to Musicares®. The multi-platinum selling artist brought back popular XO facemasks and matched every dollar to raise money to aid those afflicted because of COVID-19.
The Weeknd has given back to the members of the music community with a $500k donation to MusiCares® to aid those afflicted by the COVID-19 pandemic. The Recording Academy and MusiCares established the COVID-19 Relief Fund to help people in the music industry affected by the coronavirus disease outbreak and subsequent cancellation of multiple music events. From hotel and bar gigs to major music festivals, COVID-19 is deeply impacting live music events and the creative community behind it all. To date, the MusiCares COVID-19 Relief Fund has raised more than $20 million and provided thousands of music creators and industry professionals with emergency assistance.

About MusiCares
A friend and ally of the music community, MusiCares was established by the Recording Academy to safeguard the health and well-being of all music people. A four-star charity and safety net in times of need, MusiCares offers confidential preventive, recovery, and emergency programs to address financial, medical, and personal health issues. Through the generosity of our donors and volunteer professionals, our dedicated team works across the country to ensure the music community has the resources and support it needs. For more information, visit these pages: Website | Facebook | Twitter | Instagram

About The Weeknd
Filtering R&B and pop through an ambitious widescreen lens, The Weeknd took over popular music and culture on his own terms. The multi-platinum three-time GRAMMY Award winner is the #1 most listened artist in the world on Spotify and is a top 10 artist of all time for RIAA singles. His 2020 album After Hours is the #1 most streamed R&B album of all time, followed by his 2016 album Starboy at #2. Alongside his gilded musical career, he’s graced the covers of Time Magazine, Forbes, Rolling Stone, Harper’s Bazaar, and GQ along with the late-night stages with heralded performances with the likes of Saturday Night Live, The Late Show with Stephen Colbert, Tonight Show with Jimmy Fallon and Jimmy Kimmel Live.
In recent times he has made acting appearances in TV and film with 2019’s film Uncut Gems as well as starring in and co-writing an episode of the hit show American Dad in 2020.
He generously shares with donations in 2020 already near $1.5 million dollars to various charities.
The continuous record-breaking of charts, sales, and streams, headlining the biggest festivals and stadiums in the world, and his ever-mysterious public persona combined solidify The Weeknd as one of the most compelling and significant artists of the 21st century.

The wait is over! GRAMMY® Award-nominated platinum-certified Toronto rapper and producer NAV unleashes his full-length debut album, Reckless [XO/Republic Records], at all digital retailers today. Get it HERE.

Among a stacked tracklisting, he preceded the release with the release of “Freshman List.” Driven by hypnotic piano, airy production, and his inimitable flow, it quickly churned out 14 million-plus Spotify streams in just a month’s time. Meanwhile, the first single “Wanted You” [feat. Lil Uzi Vert] has already surpassed 110 million Spotify streams.

Elsewhere on the record, “Reckless (Intro)” showcases his impenetrable bars, while “Faith” [feat. Quavo] has “summer smash” written all over it as NAV and the Migos leader turn up. “Champion” [feat. Travis Scott] storms out of the gate with an arena-size hook and warbling melodies. Check out the full tracklisting below.

Known for high energy shows, NAV’s first headlining tour is well underway, playing to sold out venues across North America. The remaining dates are below.

NAV has quietly arrived as one of rap’s most innovative and infectious voices. Early last year, he unveiled his self-titled RIAA certified platinum mixtape NAV and joined forces with powerhouse producer Metro Boomin for the collaborative album, Perfect Timing. Meanwhile, 2016 saw him not only co-produce the GRAMMY Award-nominated “Back To Back” for Drake, but he also featured on and produced the platinum-selling “beibs in the trap” for Travi$ Scott’s blockbuster Birds In the Trap Sing McKnight. A streaming phenomenon, he regularly averages over 7.6 million monthly listeners on Spotify making him one of the top most-listened-to artists worldwide. In addition to selling out solo shows coast to coast, he also joined The Weeknd for The Starboy Tour. This tastemaker favorite has also received praise from Rolling Stone, Complex, Billboard, and The Fader and is currently gearing up to release his debut album Reckless.

XO + Marvel announce the launch of a merchandise collection inspired by “Vol. I Issue 1” of The Weeknd‘s comic series with Marvel; The Weeknd Presents STARBOY. Ahead of the inaugural issue’s release date of June 13, 2018, the capsule features hand drawn graphics from the Marvel comic book as well as an XO + Marvel collaborative logo design. The 7-piece collection features t-shirts, longsleeves, hoodies, a hat, and a hooded coaches jacket and will be available for a limited window on shop.theweeknd.com for 96 hours only on May 18th – May 21st. (US + Canada only)

The merchandise collection marks Bravado‘s first collaboration with Marvel with more in the works to launch later this year. 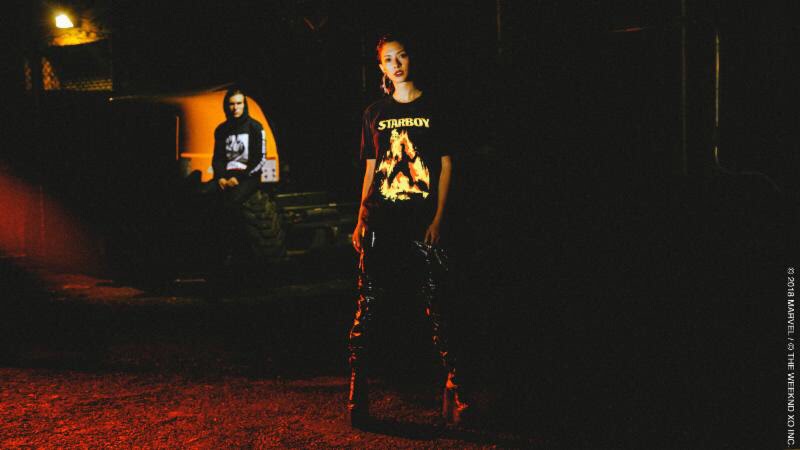 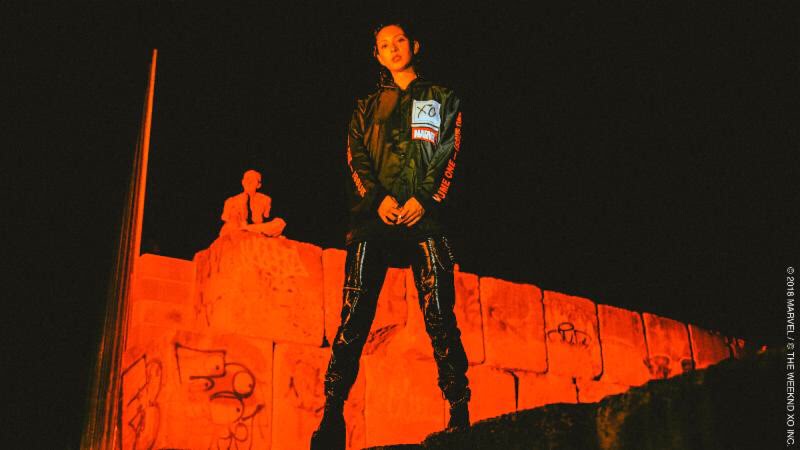 The first issue drops on June 13, 2018. This first look formally welcomes readers into this phase of the artist’s world.

Based on his GRAMMY® Award-winning double-platinum 2016 epic Starboy, the story follows the titular hero as he goes toe-to-toe against cannibalistic criminal mastermind Jack “The Chef” Smiley to save Alphatron. Speaking to his singular aesthetic and cinematic vision, The Weeknd personally penned the story alongside La Mar Taylor, Christos Gage, and the teams at Marvel, while Eric Nguyen and Guru-eFX brought the art to life.