Song from SHANG-CHI AND THE LEGEND OF THE TEN RINGS: THE ALBUM

The Official Motion Picture Soundtrack of Music From and Inspired by the Marvel Studios’ Film — Out Now!

On the heels of a blockbuster opening for Marvel’s newest film, “Shang-Chi and The Legend of The Ten Rings,” DJ Snake, Rich Brian, and Rick Ross have unveiled the official music video for the song “Run It” which appears both in the film and on the official soundtrack to the film titled Shang-Chi and The Legend of The Ten Rings: The Album. Alongside the three artists, the action-packed music video also stars the film’s lead actor, Simu Liu — who fans get to see battle it out on the dance floor with the chart-topping producer, DJ Snake. The song is featured in the infamous “bus fight scene” (watch here) which fans would have clocked when seeing the film.

Shang-Chi and The Legend of The Ten Rings, which had its global premiere on September 3, 2021, is experiencing massive critical and commercial success has opened at #1 in all key global markets and currently holding the title as #1 movie in the world. The success only continues to rise, now having spent two consecutive weekends at #1 in the United States. With $94.7M made in the box office within the first four days, Shang-Chi and The Legend of The Ten Rings now hold the record for not only the 2nd highest 3-day pandemic opening but also the highest ever domestic Labor Day weekend opener and 3rd highest September opening in industry history.

Marvel Music/Hollywood Records and Inters cope Records released the official motion picture soundtrack for Marvel Studios’ film, “Shang-Chi and The Legend of The Ten Rings.” The soundtrack, titled Shang-Chi and The Legend of The Ten Rings: The Album, is executive produced by pioneering music collective 88rising —the leading music platform for Asian and Asian-American artists across the world — and includes original production from, and inspired by, the movie. The soundtrack features Anderson. Paak, Rich Brian, Swae Lee, Jhené Aiko, Mark Tuan, Saweetie, Audrey Nuna, NIKI, Guapdad 4000, Warren Hue, Keshi, 21 Savage, Rick Ross, DJ Snake, and many more. For a full tracklisting, see below. The album was released September 3rd and can be listened to across all platforms here.

Lexus collaborates with a dynamic group of artists on original song, music video

In its new marketing campaign, “Emotional Sparks,” Lexus celebrates its commitment to engineering vehicles that deliver the freedom, excitement and inspiration drivers need to spark their creative visions. To bring the campaign to life, Lexus partnered with a group of musical artists who gain first-hand experience with innovations like Lexus Teammate™ Advanced Drive Technology found in the new LS500h, Remote Park and Plug-In Hybrid Electric technology on the all-new NX and the exhilarating 5.0L, naturally-aspirated V8 engine performance of the first-ever IS 500. Motivated by their in-vehicle experiences, the artists collaborate (for the first time) to create an original music track inspired by innovation and performance.

Titled “No Ceiling,” the track was created by three-time Grammy nominated, American record producers and songwriting duo Nova Wav, Korean-American R&B artist Audrey Nuna and Argentinian freestyle rapper Ecko, and is available on major streaming platforms. For the music video, renowned dancer and choreographer Zak Ryan Schlegel brought the song to life. Both the song and music video are live now at www.lexus.com/sparks.

“‘No Ceiling’ captures that limitless feeling you have when you’re driving and your favorite song comes on,” said Nova Wav, Warner Chappell Music songwriters. “We loved producing this track with Audrey and Ecko and seeing Zak’s moves. The energy of our collaboration comes through in the video and the commercials.”

“At Lexus, our inspiration comes from our guests, and this campaign beautifully showcases the very best of Lexus’ guest passions, energy and excitement,” said Vinay Shahani, vice president of Lexus marketing. “Prioritizing how our guests feel while driving and owning a Lexus is critical and provides the spark for us to develop cutting-edge features like our all-new multimedia system called Lexus Interface and Teammate™ Advanced Drive technology.”

While the “No Ceiling” music video provides an overall look at the collaboration, four :30 TV spots focus on the individual artists and songwriters. Each spot features an excerpt of “No Ceiling” and its inspiration:

The “Emotional Sparks” TV spots will air during primetime, late night and sports, including the NFL, college football, NHL and Premier League. The campaign also includes advanced TV, digital, social, print and out of home.

Carly Gibert is a 19-year-old house, R&B, and pop music artist, who recently was signed to 10:22PM/Def Jam Recordings. The bi-lingual, Spanish born singer just released her groovy single, “Interstellar,” which reflects on her move from Spain to LA. The disco-inspired bop appears on NOW Volume 79, and can be listened to HERE. Gibert has been making music since the age of four, and her passion for creating is evident in all of her releases. We sat down with the rising house star to speak about the inspiration behind her latest release, her songwriting process, and whats to come next in 2021.

“Interstellar” is about trying to make someone care for you as much as you care for them. You would do anything for the other person, but they only think about what’s best for them. When I moved to LA from Spain–where I was born and raised–I kind of started a new life, it felt like living in another universe. “Interstellar” actually means “living between stars,” and that is how LA felt to me. It only took me moving to the other side of the planet to realize that I wasn’t taking care of myself. It also references the movie Interstellar (which is one of my favorite movies of all time) with its theme of leaving your life behind and starting over in an entirely different setting.

Not specifically for this song, but I grew up with and have always been very inspired by Beyoncé, Jay-Z, Kanye West, Frank Ocean, Mac Miller and Tyler the Creator. I definitely grew up on house music as well, since my dad would play it at home all the time; and I think you can actually hear that on “Interstellar.” The song has a kind of house vibe to it.

I usually start off with one of the 100,000 notes on my phone. I write notes every single day–anywhere, anytime. You never know when the inspiration is going to hit, so this is how I keep track of my thoughts. When I find a lyric idea or a concept that resonates with how I’m feeling, I start writing random lines around it. At first, it honestly doesn’t make any sense and nothing rhymes. At that point, it’s all about placing the right lines in the right places and making them fit into a melody. This was also the writing process of “Interstellar.” I sometimes like to start with the melodies, though, and just build the lyrics based on the melody.

If someone told me 3 years ago that I would be working with the people I’m working with today, I wouldn’t believe them. The people I’ve met and am surrounded by are some of the people I look up to the most, and I’m so grateful for everyone who made it possible. I have a very close relationship with everyone on my team. I speak to my A&R literally every day, and I’m so lucky to be able to talk directly to the label if I ever need something. I’m super involved in all aspects of my career, so having a direct relationship with the label is very reassuring.

I would definitely say singing in Spanish. It’s something I’ve never done before, and I’m so excited to do it. I don’t have any full songs in Spanish at the moment, but I do have some verses here and there. The next song I’m releasing actually includes Spanish verses. Growing up, I was very insecure about singing in Spanish because I thought my accent was weird. It didn’t flow as naturally as English did, even though Spanish is my first language. Through the years, I’ve been practicing improving my diction and I feel a lot more comfortable now. I guess I just had to make it my own and embrace the “Spanish person who can’t articulate Spanish” aspect of myself.

I have two more songs that I really love coming out in the next couple of months. Hopefully an EP by the end of the year? (Nobody confirmed that—I just made it up—but I’m putting it out in the world). To be honest, all I want to do this year is release all the music I’ve been working on for the past 2 years. These songs are so special to me, and I can’t wait for everyone to listen to what I have to say. 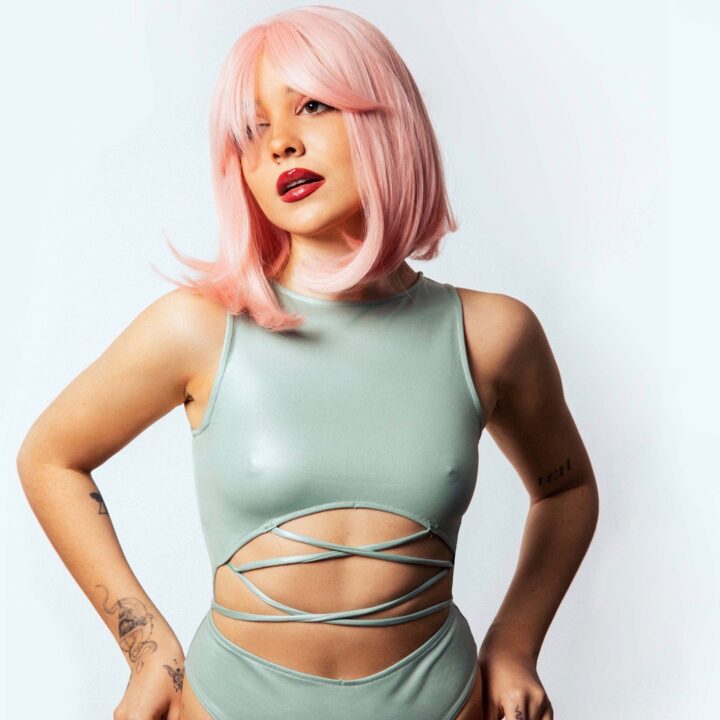