Portland-based rapper, artist, director, culture shaker and innovative ingenue Aminé delivers his video for “Riri” which he co-directed with longtime visual collaborator Jack Bergert. The video was filmed in quarantine around LA mansions with cameos from the likes of beloved sports broadcaster Taylor Rooks. Aminé even locked writer/comedian Jak Knight, from ABC’s Black-ish, for a closing skit in the “RiRi” video.

“We shot this video before the murder of George Floyd & my knowledge of the Breonna Taylor case,” Aminé writes “but I felt compelled to delay its release for obvious reasons. Activism is essential right now so I put my focus there for the past few weeks. We skipped editing sessions to march in the Black Lives Matter protests. I’m dropping the ‘Riri’ video today because it’s important to show black joy in a time where we’re constantly seeing imagery of pain and suffering.”

Pegged “one of the most creative voices in hip-hop, Aminé shakes the culture every time he releases a new song” (Hot New Hip Hop) and “Riri” is no different. Complex Magazine reportedly “wouldn’t be surpris[ed] if the real Rihanna was caught on Instagram enjoying the new tune.” Hypebeast cosigns that “the centerpiece of ‘Riri’ is Aminé’s soulful hook and reflective lyrics buoyed by bassrich production from frequent collaborator Pasqué.”

In addition to the excitement of the new music video, Aminé has also joined forces with former YEEZY designer Sara Jaramillo and Alice Wang’s ILYSM to offer a $500 grant this week for an artist impacted by COVID-19 shutdowns. Applications for this round of #ILYSM4Artists are due by noon EST on Thursday 6/25 at ILYSM.COM .

Artists who move culture forward create their own. Aminé’s debut LP, “Good For You” did just that for Portland’s music scene, hiphop and the culture at large — buoyed by his 5x platinum RIAA certified breakout smash “Caroline,” “REDMERCEDES” and “Wedding Crashers” [feat. Offset]. The album which displayed mosaic influence from his parents’ Ethiopian heritage to trailblazers like Kanye West and André 3000, made an instantly indelible impact — scoring a RIAA gold certification, millions of singles streams, Spotify #1s, and 21 weeks on the Billboard Hot 100 Songs Chart, peaking at #11. Aminé further solidified himself as a force of nature between explosive festival sets and show-stopping late nights. Maintaining this momentum, while owning his subdued profile and preference for an AirBNB wilderness cabin over a posh studio for recording, Aminé released his self-described 2018 EP/LP/MIXTAPE/ ALBUM “ONEPOINTFIVE.”

Earlier this year, Aminé continued on his promise to change perceptions and defy expectations with “Shimmy” paying homage to his past, while declaring 2020 as his. Accompanied by a co-directed music video love letter to Portland, the song garnered 20 Million streams globally and the gamut of fanfare which you can watch here. Continuing to expand his influence, Aminé also recently appeared on HBO’s Insecure this month.

FEATURING TWO NEW REMIXES OF “SUNFLOWER” AND “SCARED OF THE DARK”

Republic Records, in collaboration with Sony Pictures Entertainment, have released an all-new DELUXE EDITION of the Official Soundtrack Album for Spider-Man™: Into the Spider-Verse.

The soundtrack features two new remixes, one for the RIAA Gold certified single “Sunflower (Spider-Man: Into the Spider-Verse)” by Post Malone & Swae Lee that now features Nicky Jam and Prince Royce as well as a remix of “Scared of the Dark” by Lil Wayne feat. XXXTentacion that now features Ty Dolla $ign and Ozuna. Check out the full tracklisting below and get the DELUXE VERSION HERE.

Spider-Man: Into the Spider-Verse (Deluxe Edition / Soundtrack From & Inspired By The Motion Picture)

Asralwerks will release About You, the debut album by Albin Lee Meldau. The album which is available for pre-order today along with the release of the starkly powerful opening track Before & After marks the arrival of a remarkable new voice and an emerging artist to watch in 2018. About You will also include the standout songs The Weight Is Gone, Same Boat, and Lou Lou.

When you distill the 13 breathtaking songs on About You down to their essence, you’ll arrive at Albin’s motivation: Storytelling, says the 29-year-old singer-songwriter. That’s what will matter in the long run. If I achieve that, I’m happy. Anyone can sing. First and foremost, Albin considers himself a musical journalist who not only documents what he feels, but also what he sees. But before you discover his gift for weaving emotion, detail and humanity into a unique blend of classic soul and modern pop production, you will hear his voice and be bowled over. Maybe anyone can sing, but as NPR writes, Few singers can command an audience’s attention quite like Albin Lee Meldau. His voice is breathtaking, soulful, thunderous and impossible to ignore.

Indeed, on About You those pipes of his connect a rich history of rhythm and blue Al Green, Van Morrison to contemporary innovators like James Blake, Sam Smith and Hozier. The music does that too, swelling from spare guitar or piano-backed ballads, to Ronson-like mashups of hip-hop beats and sweeping strings, to hands-in-the-air soul-soaked dance-pop. That’s no doubt got a bit to do with Albin’s collaborators: writers like Jimmy Napes (Sam Smith, Disclosure), DJ Khalil (Anderson .Paak), and Neil Ormandy (James Arthur), plus producers Bastian Langebaek (Jessie Ware, Jack Garratt) and Jamie Scott (Rag’n’Bone Man, Ed Sheeran).

But lest you assume such a who’s who would sway a young artist from his mission, consider the fact that the haunting, unadorned song which introduced him to the world in 2015, Lou Lou, is perfectly at home on About You. And that’s where we come back to the storytelling: Just as that tune documents heartache as a woman close to Albin succumbs to madness, its neighboring songs are deeply poignant. They’re little novels about life from a man who’s heartbroken, who’s had his problems, who is weird, says Albin. It’s a breakup record and the start of something else.

The UK buzz for Albin continues to grow with a BBC Radio 2 A-List add for The Weight Is Gone, and following a sold-out London show at Omeara on April 17, Albin will return to the U.S. to support Jessie Ware on her upcoming North American tour, which includes shows in Chicago (Vic Theatre, April 29), Boston (Paradise, May 5), NYC (Brooklyn Steel, May 7-8), Philadelphia (TLA, May 10), and Washington DC (Lincoln Theatre, May 11). 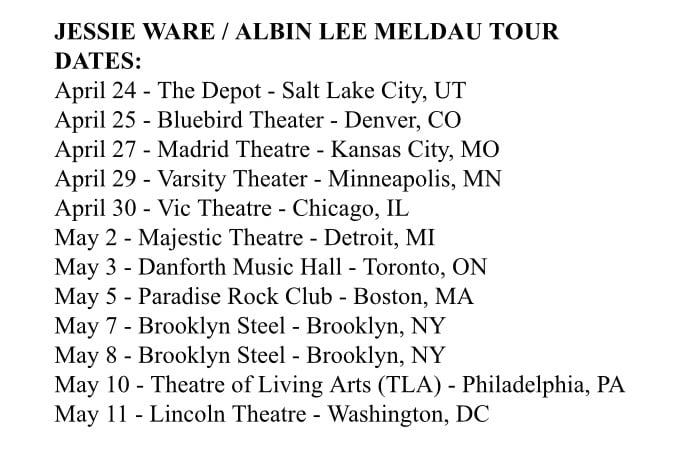 2018 is shaping up to be a breakthrough year for Albin, the son of a Swedish jazz singer mom and a British punk rocker dad who hails from Gothenburg, Sweden. His debut album follows two impressive EPs that have already notched more than 30 million streams on Spotify. Last year he made his debut at SXSW and Bonnaroo, and NPR Music invited him to perform on their popular Tiny Desk Concert series. Albin was nominated for Best Newcomer at the 2017 Grammis (Sweden’s Grammy Awards) and won the 2016 Anchor Award, an international competition hosted by the Reeperbahn Festival in Germany that seeks out the best new emerging talent. He was selected by a jury that included producer Tony Visconti (David Bowie) who sang Albin’s praises in presenting him the award: Something is pouring out of his heart and soul when he sings.