The five-song collection is highlighted by lead single Preach whose official music video is available to stream on the band’s YouTube channel. Part 2 also features the previously released track, A Good Song Never Dies which debuted in PlayStation’s MLB The Show 20. Keep on the lookout for accompanying visualizers and acoustic videos which are currently in pre-production. Conceptually, THE ORIGINAL MOTION PICTURE SOUNDTRACK is modeled after a three-act movie, sometimes referred to as the Hero’s Journey storyline, manifested as three Parts that eventually combine to form a single album.

PART 1 was heralded by the infectious lead single Van Horn. Known for their cinematic aesthetic, the band brought the western-themed official music video for track directed by Saint Motel frontman A/J Jackson to life with an inventive performance on Jimmy Kimmel LIVE!. Earlier this year, the band sold out their entire North American headline tour in support of PART 1, culminating with hometown finale in Los Angeles, days before the country went into quarantine due to Covid-19.

Remaining on the cutting edge of innovation, Saint Motel make history as “the first band to open their own virtual world” powered by Mozilla Hubs. The virtual world is designed as a motel with each room dedicated to a song on the band’s three-part album, THE ORIGINAL MOTION PICTURE SOUNDTRACK. Last month, the quartet’s launch of New World welcomed fans to the virtual space where Jackson performed a live acoustic set. In this 3D VR chatroom enabled for all headsets and browsers, audiences can enter an exclusive, immersive environment to engage directly with the band through virtual meet-and-greets and intimate, live performances, consume exclusive video content, and much more. Additionally, it doubles as a space for fans to congregate and get to know each other. Saint Motel’s New World upholds what has become a tradition of engaging with groundbreaking technology for the guys. Visit here to explore the New World. In 2016, they dropped their Elektra full length debut saintmotelevision as the first-ever Virtual Reality album and first-ever Augmented Reality album and accompanied the record with the free saintmotel AR/VR app.

In recent months, Saint Motel has made a concerted effort to mobilize their fans to join them on a pair of philanthropic causes through special, limited edition merchandise. With blood donations needed now more than ever, the band has partnered with The American Red Cross to offer a Just My Blood Type enamel pin, available for free to those who donate blood. Named for their breakout hit Just My Type, the pins are also available for purchase with 100% of net profits going to The American Red Cross. Likewise, Saint Motel has joined with the National Independent Venue Association’s #SaveOurStages campaign to ask Congress to provide aid to their network of nearly 2,000 independent live music venues across the countrymany of which the band has performed in ߝ that have been 100% shut down with zero revenue due to the pandemic. All profits from a special Saint Motel X Save Our Stages tour t-shirt will go directly to NIVA’s efforts. Both items are available in the Saint Motel Gift Shop. 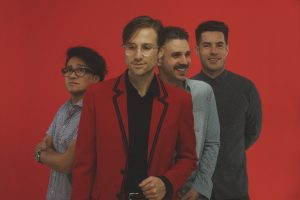