‘A life-changing and immersive experience!’ – 360 MAGAZINE

As of late, we caught an opportunity to attend the Lexus Performance Driving School [LPDS] in Monterey, California at the iconic WeatherTech Raceway Laguna Seca. This is the 4th year of this program helmed by legendary Nascar driver Scott Pruett alongside of world-class driving instructors. Under his direction, consumers as well as car enthusiasts can learn to become more confident and cognizant drivers with personalized coaching.

We flew into the Monterey airport to take in our cobalt blue RC 350 and headed straight to our accommodations at the Portola Hotel. The following dawn, we showered and worked out at the hotel gym. Within minutes, we pulled up to the prolific track to indulge in a snack bar-style breakfast. Upon check-in, we split into four teams which consisted of 10-12 people. Directly after, we met in a larger hangar to watch a video and were greeted by Mr. Pruett. Shortly after, we learned about the proper seating position, steering, throttle technique and helmet fitting.

The 8-hour course taught us about braking, line position, skid pad, autocross as well as lead and follow. Of course, like most AMG, BMW and Skip Barber racing platforms, we got to delve deep into how to drift (on wet asphalt) and ‘hit the apex.’

Towards the close of the day, all teams took to the slalom test to see who had the best time within their group for an assortment of prizes, including an F Sport watch and/or a hot lap with Pruett. After the announcement of the top three times, we were granted a certificate of completion which makes for a keepsake.

All in all, this was an awesome opportunity to learn more about dynamic performance vehicles in a safe and controlled environment. The LC 500 proved to be nimble, the RC F had a melodic exhaust note and the GS F was surprisingly agile (with its widebody).

In short, this is one of the best driving colleges offered on the Western Hemisphere and would constitute a memorable present for a celebratory moment and/or Christmas.

“The Lexus GS F is undeniably one of the most iconic vehicles of the brand’s history! Like a reserved bottle of wine, it ages well.” – 360 MAGAZINE

The ‘F’ marquee represents the high performance division of vehicles engineered by Lexus. The 2019 Lexus GS F has earned its right through rigorous testing to bear the weight of the ‘F’ stamp of approval. It’s graceful design and superior performance are on par with the BMW M Models and Mercedes-AMG line.

The GS F is only in its third season, yet it’s overall traits are retro while still embodying Lexus’s luxurious appeal. The side profiles are simple – no excess vents or useless lines. At the front, there’s a gradual growth in aggressiveness which begins with fender cut-outs. The spindle grille is accompanied by two massive air ducts which lie beneath each Triple Beam LED headlamps. It has been masterfully carved to enhance aerodynamics with a 0.33 drag coefficient. The buttocks is the defining attribute on this sports sedan – clearly this car can deep squat. Reminiscent of its predecessors, however, this model has chrome quad exhaust pipes (diagonally stacked upon one another).

Our test model came well-equipped with the 10th Anniversary Package for an additional $5000 USD. It has several unique style upgrades inside and out. Only 100 units were produced in the United States. Exterior refinements include a matte Nebula Gray paint and 19” contrasting BBS 16-spoke wheels. Michelin Pilot Super Sport tires come standard along side of painted blue Brembo calipers and ‘F’ logo puddle lights.

Unlike its competition, commonly turbocharging and supercharging their vehicles to boast extra power, Lexus decided to implant a naturally aspirated 5.0-liter V8 in the GS. It outputs 467 hp and 389 lb-ft of torque. Although it’s not outpowering it’s German counterparts, it offers a nostalgic feel with balanced performance and predictability. Its force is distributed through an 8-speed automatic transmission that is best experienced in SportS+ mode. One should take advantage of the paddle shifters and row the gears through their more spirited ranges, 4800 RPM and above.

This car exemplifies it’s athletic prowess on roads which test it’s balance. And, for those of us who don’t have access to a track, windy roads will serve. We drove through LA’s Mulholland Drive to PCH for a Sunday morning jaunt to Carr Winery in Santa Barbara for a tasting. Much to our surprise, the husky 4-door held its ground. The tires stuck around corners with great tenacity and body roll was almost absent. Moreover, the ventilated disc brakes with high friction pads were of great help in approaching turns. In gain, F Sport suspension with Ilachs-sourced shock absorbers kept the ride firm with little rebound in both Track and SLALOM modes.

Plenty of features are included to keep drivers as well as passengers safe and sound. Essential characteristics that came in handy are the following: smart stop technology, blind spot monitor with cross traffic alert, all-speed dynamic radar cruise control (for long drives), lane departure alert with steering wheel assist and lane keep assist (are great for driver fatigue). Lastly, Lexus Enform offers assistance if the vehicle is involved in accident or stolen. You can also communicate with an actual representative to send directions straight to the car while in motion. Finally, a car concierge for a sports sedan that confortably seats four.

As much as we enjoyed listening to the sweet serenade of the exhaust, the audio system is just as satisfying. Our version came with a 17-speaker Mark Levinson premium sound system, with 835 watts of power ($1380 USD). It’s unquestionably one of the most powerful units its segment. In addition, there’s a 12.3-inch infotainment display that can be surfed with an armrest remote. To date, Apple CarPlay or Android Auto are unavailable. However, music can be played from your phone while connected to Bluetooth and/or plugged into the USB port. And, for $900 you can opt for an in color heads-up display (HUD) that offers metrics such as the speed limit, current MPH/KMH and tachometer.

In short, the standard 2019 Lexus GS F is priced at $84,350 and the 10th Anniversary Edition retails around $93,250. For far less than its challengers, the GS F is an exotic with tons of intuitive amenities. A true head-turner and automotive beast.

For additional information on the LEXUS GS F go HERE.

Since 1999, Owner/Winemaker/Sommelier Ryan Carr and wife Jessica Carr have been developing an impeccable assortment of Pinot wines – crisp, juicy and delicious. Established in downtown Santa Barbara, their main tasting room is inside of a quonset hut. If the corrugated structure doesn’t enthrall you to enter, Jessica’s warm smile and innate ability to promote her product will have you become a member of their 800+ wine club. The decor is modern yet industrial with a saloon-ish style bar with wine on tap. Adjacent is an outdoor comfy patio where you and a group of friends can soak up a session while basking in the sunshine.

Throughout the space are stacked barrels, workers fermenting grapes with monthly rotating provocative art pieces scattered throughout the walls on consignment. Everyone knows grapes love art and when the fruit is happy so is the wine.

Ryan wasn’t available for our private tasting but his presence was prevalent. During harvest, he’s out in the fields picking and sorting fruits. He and Jessica met at the University of Arizona about 20 years ago – he majored in graphic design and she in communications. It was inevitable that Ryan designed the ultra chique labels and she wrote many of their outward facing materials.

Nothing can stand in the way of their success with such an immense passion for winemaking and a strong business acumen. And, the positive reviews alongside of 90+ scores keep rolling in. Named one of Six California Wineries You Should Know About.

They started with only 15 people almost two decades ago; now with 2 locations and a wine management company (early September they handled the grand opening for sister brand CrossHatch Wines) – they’re invincible. Presently, they have no children, but obviously the grapes are their babies. Angel is their Rottweiler/Shepherd 2yro dog and was rescued from an overcrowded litter. Evidently, the Carrs have huge hearts and it’s known throughout the city. Everyone we encountered both inside and outside the winery respects their philanthropic endeavors. In fact, they’re always giving back to local charities.

Moreover, this eclectic outfit is host to a plethora of music events where indie rock to reggae bands showcase their talent on Friday nights from 6-8pm.

Be on the lookout this Halloween for their costume competiton where they will have a live DJ, small bites as well as spooky decorations. And if that doesn’t float your boat, you may want to check out their WOGA (wine + yoga) which is rumored to be held on their outdoor patio. Other honorable mentions include their indie pop-up market which will showcase local artisanal made goods and their 46 wine lockers – customers can store 4, 8, 16 and up to 72 cases per rental.

It’s so refreshing to come across such a winery ambiance only 82 miles from central Los Angeles. We drove up in the Lexus GS F 10th Anniversary Limited Edition to add to this whimsical wine experience. 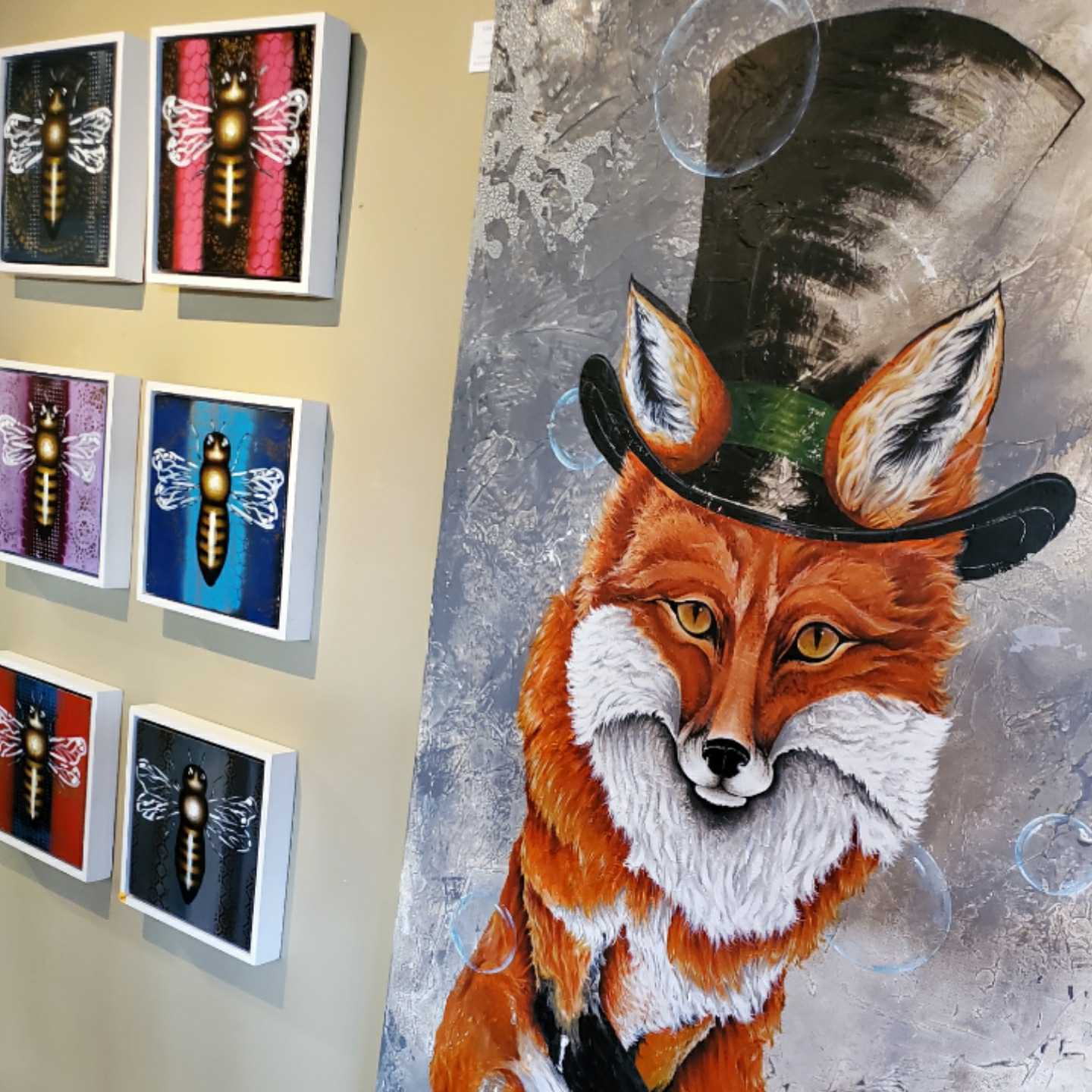 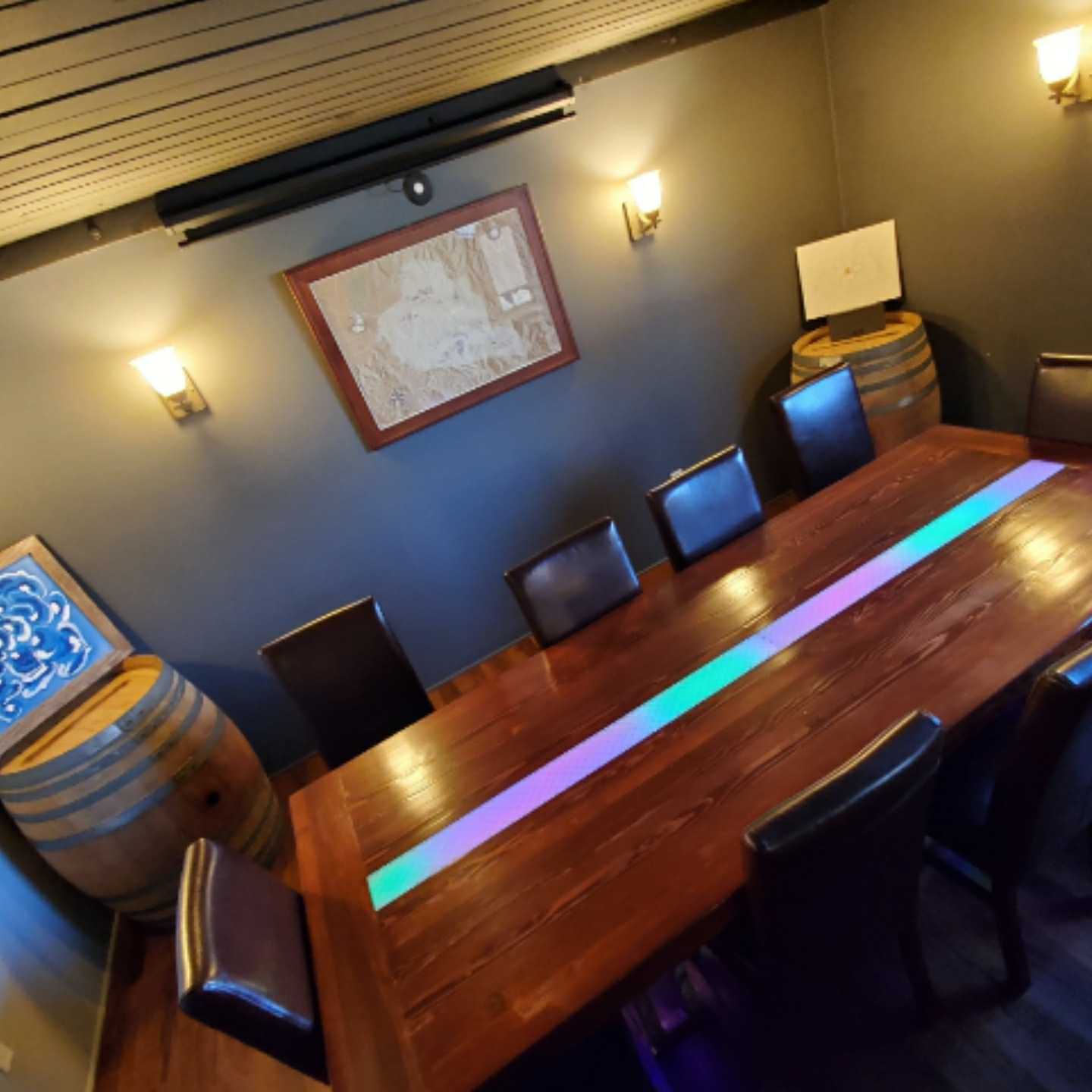 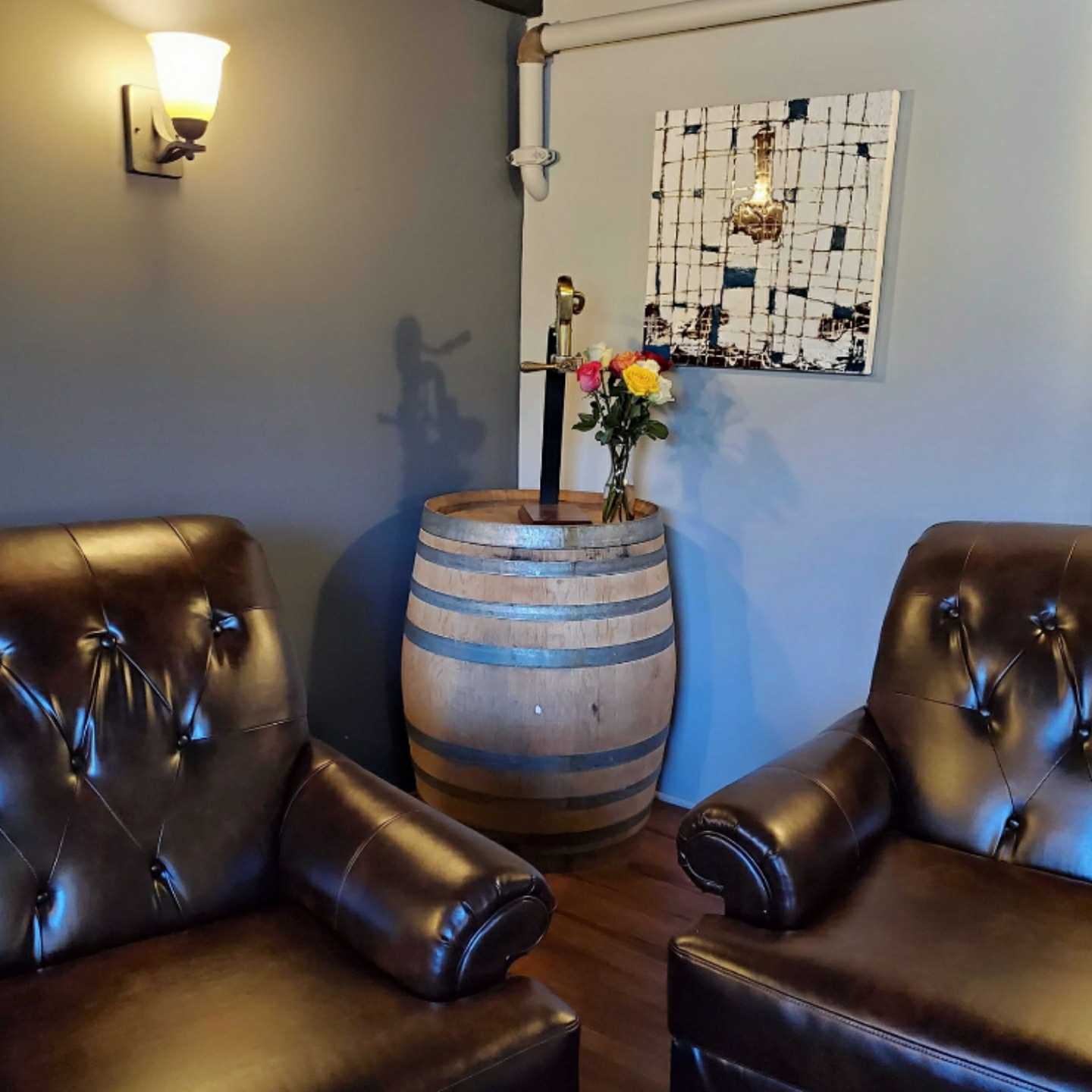 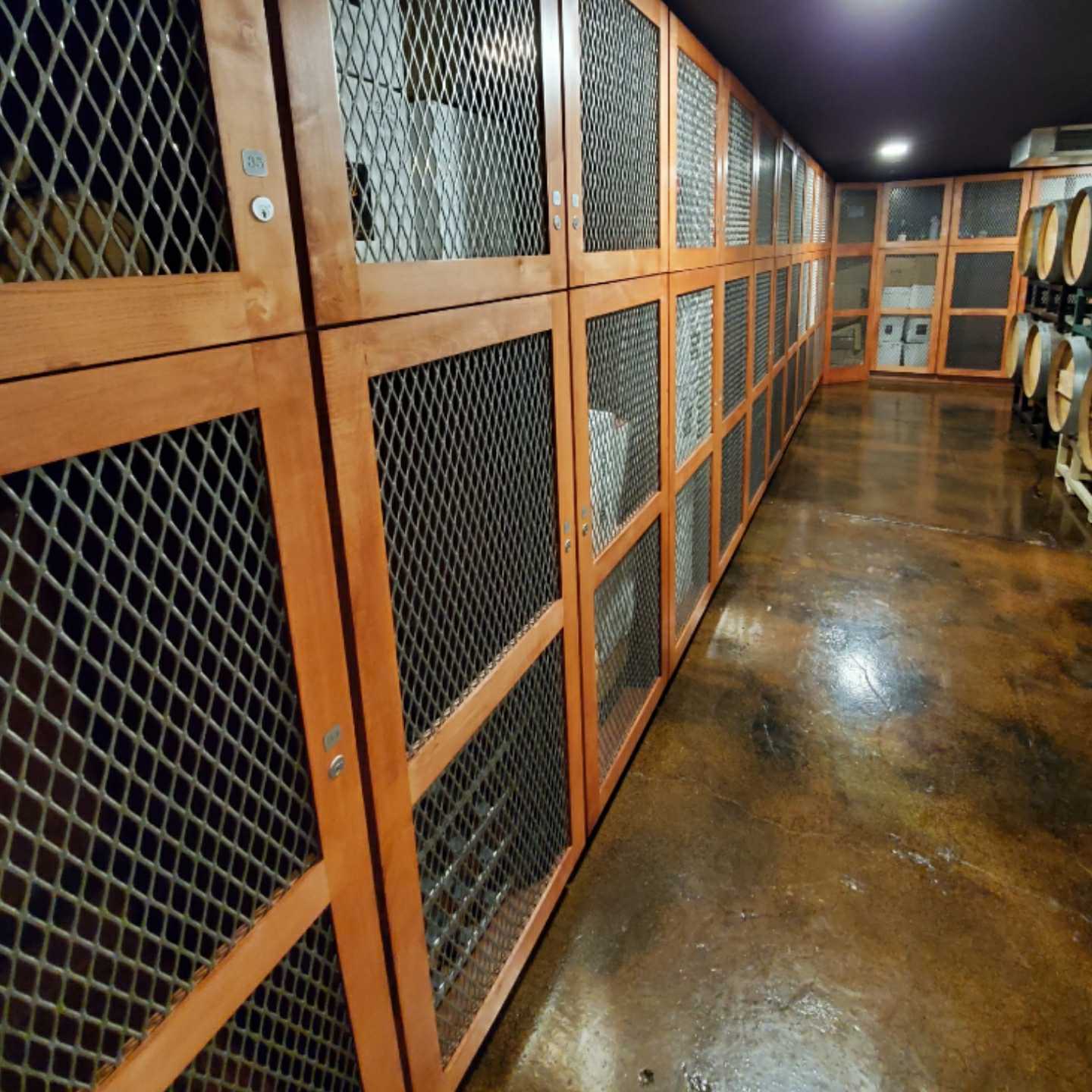 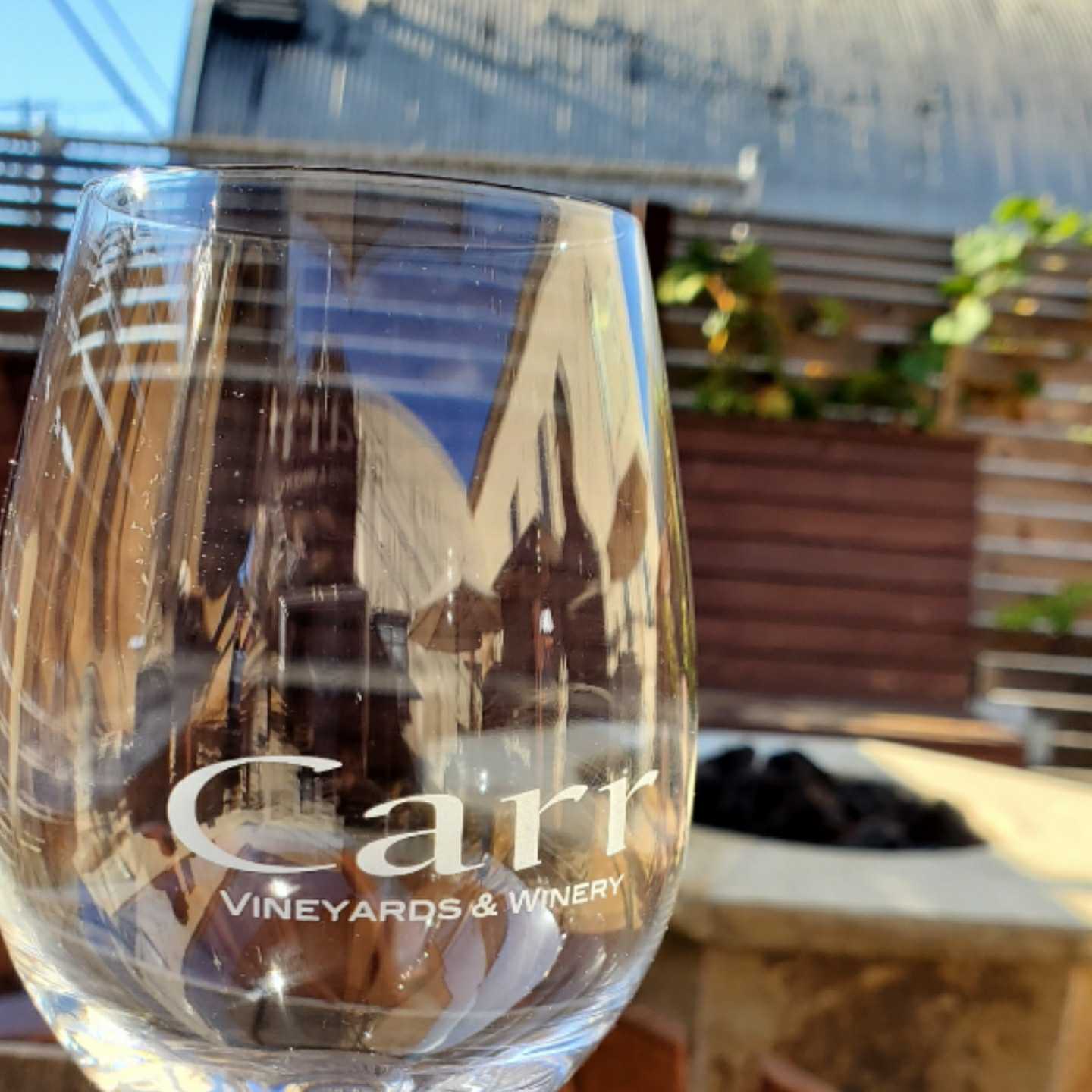 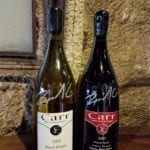 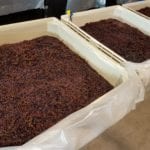 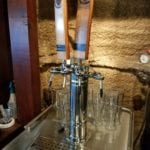 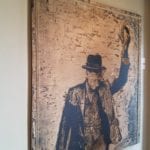 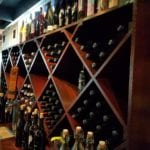 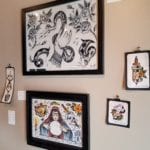 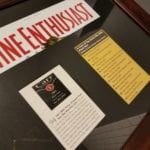 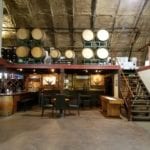 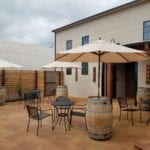 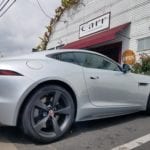 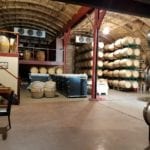 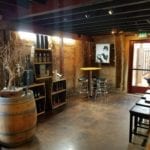 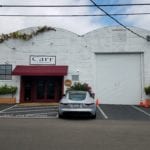 *Carr Vineyards & Winery is a small, handcrafted winery producing 4500 cases in downtown Santa Barbara. All of the wines made by Carr are sourced from Santa Barbara County vineyards and are made in a traditional winemaking style to capture the essence of the grape varietal and region. The vast microclimates of Santa Barbara County allow the winery to produce several wines including Pinot Noir, Pinot Gris, Sangiovese, Grenache, Cabernet Franc and Syrah. Carr Winery has two locations for guests to enjoy wine tasting, wines by the glass and wine on tap: The Barrel Room in downtown Santa Barbara and The Warehouse in Santa Ynez.