Trey Anastasio Band (TAB) announces its long-awaited return to the road with an upcoming series of live dates. The tour begins September 17 at Thompson’s Point in Portland, ME and then travels through a two-night-stand at New York City’s Radio City Music Hall on October 2 and 3. The upcoming run marks the first TAB tour for new bassist Dezron Douglas, who joins the band following the recent passing of original member Tony Markellis. Presales begin Wednesday, July 14 at noon ET. Tickets will go on sale to the general public on Friday, July 16.

Last year saw Trey Anastasio Band release a new live album, Burn It Down, a three-dimensional sonic time capsule that captures the explosive eight-piece band on their January 2020 tour. Produced and mixed by Vance Powell (Phish, Chris Stapleton, Jack White), the 15-song collection shows TAB at the peak of its powers, combining their trademark tight musicianship with unbounded performances. Burn It Down is available now at all digital outlets and vinyl will be available on August 20.

Over the past three decades, composer/guitarist/vocalist Trey Anastasio has forged a multi-faceted career, winning acclaim in rock, classical and theatrical circles. He is a founding member of Phish, one of today’s most successful and innovative rock bands. In the summer of 2017, Phish completed a residency at the world-renowned Madison Square Garden in New York – an unprecedented 13-night run known as The Baker’s Dozen. Phish’s total number of performances at the famed arena currently sits at 64.

Anastasio has received GRAMMY® nominations for his recordings with Phish and for his solo work. He has collaborated with such artists as Dave Matthews, Herbie Hancock, Carlos Santana, Toots and the Maytals, B.B. King and The Roots, and – as part of the trio Oysterhead – Les Claypool (Primus) and Stewart Copeland (The Police). He co-wrote the music for the Broadway musical Hands on a Hardbody, which received a Tony nomination for Best Original Score in 2013. In the summer of 2015, Anastasio joined the surviving four members of the Grateful Dead for five stadium shows, which celebrated the band’s 50th anniversary and served as their farewell shows.

Anastasio has performed his original compositions with numerous symphonies. The New York Times hailed his Carnegie Hall performance with the New York Philharmonic as “that rarest of rarities, a classical-rock hybrid that might please partisans from both constituencies.” In 2014, he debuted a new piece for guitar and orchestra, entitled Petrichor, on a West Coast orchestral tour that concluded with a performance at the Hollywood Bowl, marking his second performance with the Los Angeles Philharmonic. In April 2019, Anastasio released his 14th solo album, Ghosts of the Forest, which Rolling Stone said was “built around psychedelic guitar liftoffs, ambitious arrangements, and extremely personal lyrics.” Between Me and My Mind, a film documenting Trey’s creative process debuted at the Tribeca Film Festival and played a sold-out limited-run engagement in theaters this past summer.

With Covid-19 making an impact on businesses, the live music industry has been among those hit the hardest. The loss in revenue is estimated to be $8.9 billion, along with the comedy and performing arts entertainment. More than 90% of independent venues are at risk of being permanently shut down. The National Independent Venue Association (NIVA) is working hard to get emergency relief funds out to these venues in dire need. With the help of YouTube, NIVA and Save Our Stages created a virtual concert to help raise money, which will benefit these independent venues. The list of venues is on their website. Artists from around the country have joined together in an effort to raise awareness and save the stages they once performed in.

These venues have supported many big artists and have even launched careers for many. Not only are the artists feeling the impact, but the employees behind the scenes are as well. From the sound to the stage crew, many of them are left without a job and fear what will come next. Fans are left with tickets to be refunded and the uncertainty of future shows to come. This leaves the music industry shaken when it comes to the revenue that concerts bring. Concerts generate more money than streaming music on popular platforms such as Spotify, Apple music and Pandora. Popular artists such as Drake have made $23.7 million in one year from streaming, yet his last tour, Summer Sixteen featuring Future, grossed $85 million. Save our stages is the saving platform for artists, fans and lovers of music to support the venues we know and love and keep the live music alive.

Kicking off their first ever virtual event, an exclusive trailer narrated by Neil Young released footage featuring various iconic artists performing in these at-risk venues and some of the earliest known footage of Neil Young performing at the American Shakespeare Theatre in Stratford, CT. This 3-day virtual event lasted from October 16th-18th. Day one started out with Alec Benjamin performing at Hotel Café in Los Angeles, CA. There was no audience, just the performers. Some talked of past show experiences and selling out venues. Following him was Billie Eilish’s brother, Finneas who is breaking out on his own, releasing his first single called Can’t Wait To Be Dead. Other artists for day one included, Sebastian Yatra, Dizzy Fae, Macklemore, YG, and Dillon Francis. Marshmellow and Demi Lovato hit the stage at the Troubadour in Los Angeles, CA. They performed their hit single together It’s Okay Not To Be Okay, as well as talked about their experiences in independent venues they’ve played in and seen other artists play in. Macklemore performed in Seattle, WA singing hits that included Ten Thousand Hours, Glorious, Good Old Days and a few others during his thirty-minute set. While G-Eazy took pieces of his hits and performed over a dozen songs in his set at The Independent in San Francisco, CA.

Day two kicked off with an even bigger list of performers. Sixteen artists each in their own independent venue to perform in. Jason Mraz was the first up, singing the best of his songs from I’m Yours to I Won’t Give Up out of the Belly Up Tavern in San Diego, CA. Rise Against brought the rock style back to the stage singing six of their hits from the Metro in Chicago,IL. Miley Cyrus played at the Whiskey-Go-Go in Los Angeles, CA wearing all black Rockstar attire. Though she had a short playlist, it was filled with fun energy. Also playing out of Los Angles from Troubadour, the Foo Fighters. Dave Grohl talks about his first experience at the Toubadour and meeting Bret Michaels for the first time. They start out with Skin and Bones continue with My Hero, These Days, Times Like These and end it with everyone’s favorite Everlong. The Roots performed a longer set list that lasted a little over an hour at the Apollo Theater in New York, NY. Wrapping up day two was Major Lazor performing out of Gramps in Miami, FL. He had a setlist similar to length of The Roots lasting a little over an hour and promoting Save Our Stages throughout his set. To many of these artists, the venues that are at stake are not only where they got their start in the music world but also where they discovered music. Demi Lovato mentions one of her first concerts was at an independent venue where she had seen Paramore.

The final day came with some big names. Little Big Town plays at the Exit/In in Nashville, TN. They talk about their first show and replayed one of their classic songs, Boondocks as an encore. The last song is a fan favorite, Girl Crush. Dave Matthews performs solo at the Jefferson Theater in Charlottesville, VA. His setlist includes a new song that is played for the first-time live called the Ocean and the Butterfly. The Lumineers wrap up this event, taking it back home to Colorado at the Boulder Theatre in Boulder, CO. Reminiscing on the songs they’ve played in small independent venues and how great songs such as Ophelia came from those experiences and performing them.

Save our stages is not just important to the artists, but to the fans and music lovers all over the nation. There are over 2,000 venues that have joined the National Independent Venue Association to help save theses venues and keep not only the jobs that come with it but the live music experience we love and miss. Though this virtual event is over, the fight is not. Save our venues has raised over $1,000,000 and has a set goal of $5,000,000. The funds will be administered by the Giving Back Fund, a non-profit organization. The money will go to the venues in dire need and in fear of being shut down. With the help of all the artists who participated along with Youtube, NIVA and every person who donated, we can only hope that enough money is raised to save these venues.

Now that we are in the midst of Holiday Gift Guide Season, we hope to put the new limited edition Cork Speaker from The Dreaming Tree wines (a California wine brand from winemaker Sean McKenzie and musician Dave Matthews) on your radar!

The first gift set of its kind, The Dreaming Tree Wines Cork Speaker is a limited-edition wine cork that also doubles as a Bluetooth speaker, using the bottle to amplify sound, bringing your favorite music to life while simultaneously keeping your favorite wine flavorful! The perfect gift for music and wine lovers alike, The Dreaming Tree Wines Cork Speaker will be sold alongside a bottle of fan-favorite, award-winning Dreaming Tree Crush Red Blend, aptly named after the DMB hit, for an affordable $35.00. 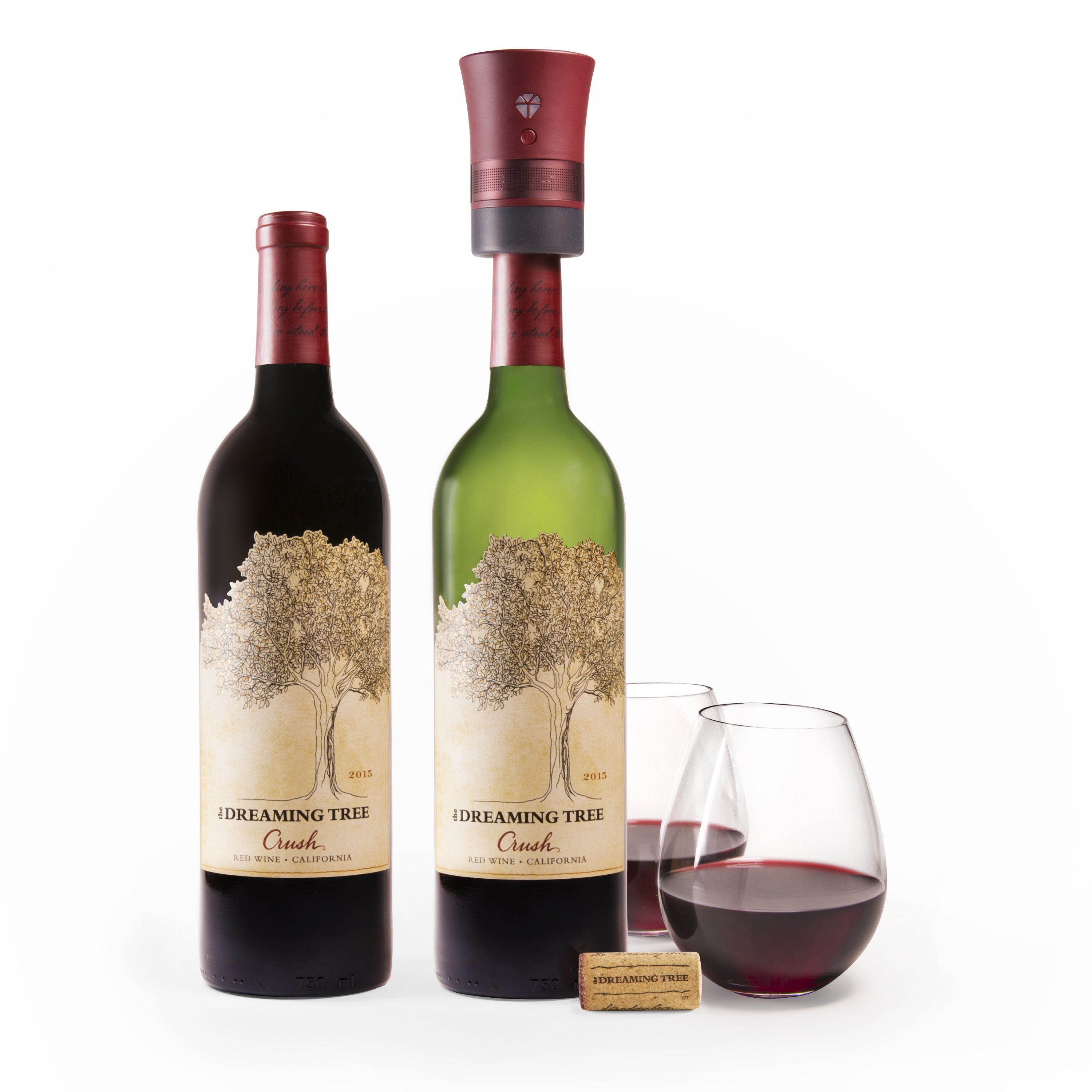 Additionally, in continuation with The Dreaming Tree’s commitment to sustainability and environmental conservation, a portion of proceeds from the sale of the Cork Speaker will be donated to Living Lands and Waters and The Wilderness Society, which protect, preserve and restore our nation’s major rivers, watersheds, and forestry areas.