With Covid-19 making an impact on businesses, the live music industry has been among those hit the hardest. The loss in revenue is estimated to be $8.9 billion, along with the comedy and performing arts entertainment. More than 90% of independent venues are at risk of being permanently shut down. The National Independent Venue Association (NIVA) is working hard to get emergency relief funds out to these venues in dire need. With the help of YouTube, NIVA and Save Our Stages created a virtual concert to help raise money, which will benefit these independent venues. The list of venues is on their website. Artists from around the country have joined together in an effort to raise awareness and save the stages they once performed in.

These venues have supported many big artists and have even launched careers for many. Not only are the artists feeling the impact, but the employees behind the scenes are as well. From the sound to the stage crew, many of them are left without a job and fear what will come next. Fans are left with tickets to be refunded and the uncertainty of future shows to come. This leaves the music industry shaken when it comes to the revenue that concerts bring. Concerts generate more money than streaming music on popular platforms such as Spotify, Apple music and Pandora. Popular artists such as Drake have made $23.7 million in one year from streaming, yet his last tour, Summer Sixteen featuring Future, grossed $85 million. Save our stages is the saving platform for artists, fans and lovers of music to support the venues we know and love and keep the live music alive.

Kicking off their first ever virtual event, an exclusive trailer narrated by Neil Young released footage featuring various iconic artists performing in these at-risk venues and some of the earliest known footage of Neil Young performing at the American Shakespeare Theatre in Stratford, CT. This 3-day virtual event lasted from October 16th-18th. Day one started out with Alec Benjamin performing at Hotel Café in Los Angeles, CA. There was no audience, just the performers. Some talked of past show experiences and selling out venues. Following him was Billie Eilish’s brother, Finneas who is breaking out on his own, releasing his first single called Can’t Wait To Be Dead. Other artists for day one included, Sebastian Yatra, Dizzy Fae, Macklemore, YG, and Dillon Francis. Marshmellow and Demi Lovato hit the stage at the Troubadour in Los Angeles, CA. They performed their hit single together It’s Okay Not To Be Okay, as well as talked about their experiences in independent venues they’ve played in and seen other artists play in. Macklemore performed in Seattle, WA singing hits that included Ten Thousand Hours, Glorious, Good Old Days and a few others during his thirty-minute set. While G-Eazy took pieces of his hits and performed over a dozen songs in his set at The Independent in San Francisco, CA.

Day two kicked off with an even bigger list of performers. Sixteen artists each in their own independent venue to perform in. Jason Mraz was the first up, singing the best of his songs from I’m Yours to I Won’t Give Up out of the Belly Up Tavern in San Diego, CA. Rise Against brought the rock style back to the stage singing six of their hits from the Metro in Chicago,IL. Miley Cyrus played at the Whiskey-Go-Go in Los Angeles, CA wearing all black Rockstar attire. Though she had a short playlist, it was filled with fun energy. Also playing out of Los Angles from Troubadour, the Foo Fighters. Dave Grohl talks about his first experience at the Toubadour and meeting Bret Michaels for the first time. They start out with Skin and Bones continue with My Hero, These Days, Times Like These and end it with everyone’s favorite Everlong. The Roots performed a longer set list that lasted a little over an hour at the Apollo Theater in New York, NY. Wrapping up day two was Major Lazor performing out of Gramps in Miami, FL. He had a setlist similar to length of The Roots lasting a little over an hour and promoting Save Our Stages throughout his set. To many of these artists, the venues that are at stake are not only where they got their start in the music world but also where they discovered music. Demi Lovato mentions one of her first concerts was at an independent venue where she had seen Paramore.

The final day came with some big names. Little Big Town plays at the Exit/In in Nashville, TN. They talk about their first show and replayed one of their classic songs, Boondocks as an encore. The last song is a fan favorite, Girl Crush. Dave Matthews performs solo at the Jefferson Theater in Charlottesville, VA. His setlist includes a new song that is played for the first-time live called the Ocean and the Butterfly. The Lumineers wrap up this event, taking it back home to Colorado at the Boulder Theatre in Boulder, CO. Reminiscing on the songs they’ve played in small independent venues and how great songs such as Ophelia came from those experiences and performing them.

Save our stages is not just important to the artists, but to the fans and music lovers all over the nation. There are over 2,000 venues that have joined the National Independent Venue Association to help save theses venues and keep not only the jobs that come with it but the live music experience we love and miss. Though this virtual event is over, the fight is not. Save our venues has raised over $1,000,000 and has a set goal of $5,000,000. The funds will be administered by the Giving Back Fund, a non-profit organization. The money will go to the venues in dire need and in fear of being shut down. With the help of all the artists who participated along with Youtube, NIVA and every person who donated, we can only hope that enough money is raised to save these venues.

Marshmello and Halsey shared the official video for their hit single, “Be Kind.” Directed by Hannah Lux Davis, who also helmed Halsey’s “Nightmare” and “Alone” clips, the contemporary dance video takes viewers to three distinct worlds. View the video, which received a YouTube premiere earlier today, HERE. Filming a dance video during quarantine presented challenges, but Halsey learned the choreography on Facetime and did her own makeup, as always.

“Be Kind” is a worldwide hit across the boards – on playlists (with both artists appearing most recently on the cover of Apple Music’s “Today’s Hits”), at radio, on Shazam and elsewhere. Since its release last month, the song has amassed more than 175 million combined global streams. Get “Be Kind” at http://bekindxx.com/. The Jacques Lu Cont remix was released yesterday and can be heard HERE. Surf Mesa, fresh off his global hit “ily (i love you baby)” feat. Emilee, has also remixed “Be Kind.” Listen HERE.

“Be Kind” is the latest song offered from Marshmello, who is coming off a strong 2019 with 6x Platinum “Happier” with Bastille – also released by Astralwerks – plus 4x Platinum “Silence” with Khalid.


Halsey kicked off 2020 with the release of her new album, Manic, which debuted at No. 1 on Billboard’s Top Current Albums chart and has been certified Platinum in numerous countries, including the U.S. It contains the 7x Platinum “Without Me” – the most-played song of 2019 at U.S. radio and the longest-running Billboard Hot 100 top 10 hit by a female artist of this century – and the Platinum hits “Graveyard” and “You Should Be Sad.”

Check out photos from the event HERE!

We wrote “Happier” last year and thought it would be great as a collaboration; explains Dan Smith. We had a lot of fun working on it with Marshmellow, who managed to find joy in the melancholy. It’s always good to step into somebody else’s world for a minute. 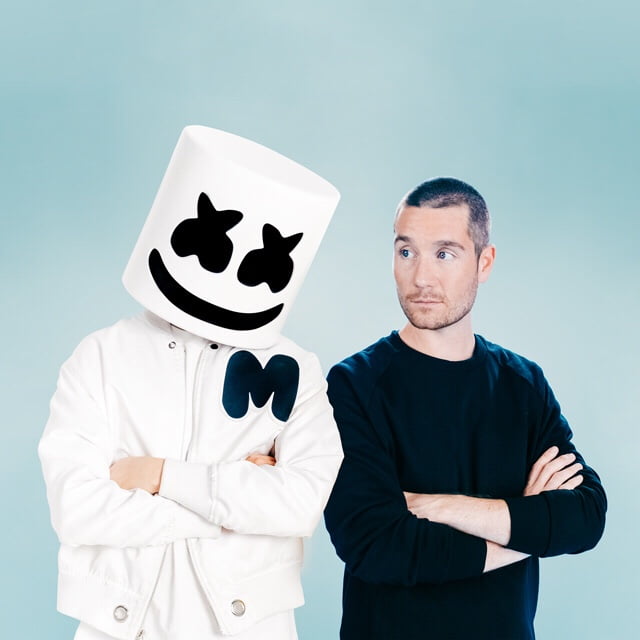 Marshmellow; is re-defining today’s music industry, one hit after another. With the last year’s worth of chart topping singles featuring collaborations with the likes of Selena Gomez, Migos, Khalid, Logic and more, the artist has clocked a staggering 2+ billion streams across Spotify alone with over 40 million monthly listeners, cementing him as the platform’s #4 Most Streamed Artist in the World.

He continued his global takeover with the summer smash “FRIENDS” with Anne-Marie. Certified platinum in the US and UK and certified triple platinum in Canada, “FRIENDS”; ranked #1 on both iTunes and Shazam; worldwide charts, with over 500 million overall streams. The single climbed to #2 at Pop radio. 2017 “Wolves” ft. Selena Gomez peaked at #1 on Billboard’s Hot Dance/Electronic Songs chart and #5 at top 40 radio. The same year Marshmellow released his hit “Silence” ft. Khalid, which is nominated for “Best Dance” at the 2018 MTV Video Music Awards. Marshmellow; himself is ranked #4 overall on Billboard’s 2018 Dance List.

Most recently, Marshmellow released his highly anticipated sophomore album Joytime II, which debuted at number 1 on Billboard’s top dance/electronic chart upon release last month. The album follows 2016’s Joytime which landed him in the Top 5 on Billboard’s Top Dance/ Electronic Albums, with his track “Alone” propelling his monumental success with over 110 million Spotify plays and over 1 billion views on YouTube making it certified Platinum in only one year.

Bastille is fresh off the #1 Alternative radio hit “Quarter Past Midnight,” which is the band’s third single to top the Media base chart. Tickets for the band’s September 24 show at the Wiltern in Los Angeles go on sale today at 10:00 AM PT.

Hailed by Rolling Stone as Brit pop’s new crown princes, Bastille was introduced internationally with the single “Pomepeii,” which is now 6x Platinum in the U.S. alone. Th band comprising Dan Smith, keyboardist Kyle Simmons, bassist/guitarist Will Farquarson and drummer Chris Wood; has sold upwards of 15 million adjusted singles and six million adjusted albums. Cumulative streams across all platforms exceed three billion. Since winning British Breakthrough Act at the BRIT’s, Bastille has earned GRAMMY, AMA, and MTV Europe Awards nominations. The band’s “World Gone Mad,” was the lead single from the soundtrack for the 2017 Netflix film, Bright. Starting Will Smith and Joel Edgerton, the film is one of the site’s most streamed programs ever.