Pressure225 offers refreshing perspective and a distinctive voice. Emerging thru the rubble of battle rap, the sound of no regrets, leaving it all on every track.

Rapper Pressure225 released his visual debut for his song “Everything,” has an upcoming EP To Die For, and is just coming off of a monumental win in a freestyle rap battle.

The Bronx native’s career is growing with the momentum of his victory as HOT97’s Top shelf freestyle winner. Pressure spits his way to the top of rap battles and music charts with the wit and cadences of a budding force in Hip Hop. My first encounter with Pressure225 was at SOBS where I worked closely with the new artist as he prepared for his performance. Today, I caught up with the lyricist for a Q&A for 360 Magazine and learned how his charm translates from the stage and into real life.

What new projects are you working?

I’m currently finishing my new EP titled “To Die For.” Every time I say the title it feels off, to be real. But it’s a story. You would have to tune in to understand the concept behind it.

I try to make all my projects based on a theme and this one made me dig deeper than any of the other projects I worked on. To try and summarize, it’s about letting go of what you love. In my eyes, that is music. “Is this something I love where the sacrifice is worth the reward?” I’ve been working on this so long, the stress of the independent grind I just had to ask myself, is it to die for? Listen in and it will translate deeper.

What inspired your new music and video for “Everything?”

“I give you everything” goes back to the theme in the music. It’s a revolving door behind the questions I have for my passion. It’s almost like my insecurities speaking. I also felt like many people can relate. How much of myself can I give to the craft before I fall down? I wrote the song in 20 minutes and it was the first song I recorded with the homie @madamixes. I’ve always recorded my own projects but this time I felt that I needed to give that responsibility to another ear. It worked out and by taking the opportunity I learned so much about recording in the new streaming era.

The video was shot by @ezrugonalez, and, to be honest we had no big plan. It was like a run and gun video that he made work. His vision behind the camera is crazy. We shot it in Dumbo, Brooklyn and Ezru gave the direction and I gave the performance.

How do you respond to critics who treat battle rap not as a mainstream vehicle?

I love battle rap. Battle rap is the purest form of rap. It’s raw and performed in one shot as a 9-minute performance done in three rounds. It doesn’t get more real than that. There are big time battlers who make $70-80k a battle. I wouldn’t say battle rap is not mainstream but big leagues like @urltv, who are backed by the likes of Drake, are definitely taking it there. If you come up in battle rap it can open gates to new opportunities for sure.

Describe your music in one word?

As the winner of episode 4 of Hot 97’s Top shelf, what are your biggest takeaways?

Networking is key. Listen and learn from the people you meet, take advantage of the rooms you are in. I met some good people behind the scenes who handed me game that I hold on to till this day. When I get my shot for @funkflex freestyle, I will show out for sure lol.

Artist you hope to collaborate with?

My dream list is very New York. Jadakiss, Fab, Nas, but if we are talking more active I’d say J. Cole, Kendrick. I also really like Griselda Records, Westside Gunn, Conway, and Benny for bringing rap back to New York.

How has quarantine life been for you as a new independent artist?

As for independent artists, all we ask for is free time to work on the craft. We as a whole have never been in this predicament. For myself, I can say I took advantage of that time. I am more aware of the steps I need to take on my journey. I made some investments and now I am looking to drop the projects I worked on during quarantine.

What are your thoughts on rap culture seemly more inclusive?

Its a love-hate thing. I love the fact that rap culture has come this far. I hate the moments I step back and know when it’s being patronized. I’m a guest in Hip Hop and it saved me; I will always be on the front lines to keep this culture growing.

Who are your top five rappers?

I don’t have a top five. It’s the age old question and I’m so deep into rap that my mood changes too much to pick five. But, I do have three that will always remain, that’s Jay Z, Big, and Nas. But, I may change that later.

Westside Gunn has announced his long-awaited, incredibly anticipated Shady Records debut LP Who Made The Sunshine for August 28. The release date coincides with the second annual Westside Gunn Day, a day in Buffalo commemorated by the Mayor of the city recognizing everything he has done for his hometown. Gunn, who is a strong believer in the power of album cover art, has previously worked with such creative minds as Virgil Abloh on Pray For Paris and has always followed his own vision to create truly unique and inspiring art for all of his projects. This time he finds his inspiration close to home, with the artwork designed by WS POOTIE, Gunn’s daughter.  On art and Who Made The Sunshine Gunn explains “I live my life based on ART, everything is ART, sometimes you might understand it sometimes you might not, sometimes you might not get the masterpiece until later on, but I knew it was a masterpiece the moment I made it”.

Westside Gunn is one of the most prolific artists currently in the game having already turned heads and made waves this year with Pray For Paris. The album garnered widespread critical acclaim, with heavy praise coming from the likes of GQ, Rolling Stone, Pitchfork, The Ringer, Stereogum, NPR to name a few. The album also saw Gunn’s entry into Billboard Top 200 for the first time. Three months later Gunn released his FLYGOD Is An Awesome God II mixtape, yet another highpoint for rap in 2019, and another addition to an impeccable discography. Gunn’s rap acumen and grind have brought him from the streets of Buffalo, NY to cosigns and deals with two of the biggest and most important rappers of all time; via a deal with Eminem’s Shady Records and a management partnership with Jay-Z’s Roc Nation, and his drive, determination and vision has established his independent record label, Griselda, as one of the most important and exciting imprints in the culture. Stay tuned for more details on the album coming soon.

The PUMA Galleria saw sneakerheads excited to check out the 90’s vibes in the Toys, Tech, Tracks and Trophies sections with line ups for the limited RS-X Toys custom sneaker works by JBF Customs and Alexander John inspired by 90s Tech and Mix Tapes respectively. The artists also did live custom designing demos at the courtyard. All pairs were sold out in minutes. PUMA also unveiled the upcoming collaboration pack with Hot Wheels – the RS-X Toys Hot Wheels that release on December 1st.

Special guests Kali Uchis, A Boogie Wit a Hoodie, Yo Gotti and Nipsey Hustle all came out to promote and sign the limited-quantity bootleg tees designed by Chinatown Market. Each tee design were inspired by each artist. YesJulz and her 1AM radio crew continued with their live broadcast from the PUMA Galleria and interviewed the artists mentioned above plus a whole lot more. Also seen were Emory Jones, Upscale Vandal, Karrueche and Victor Cruz, among the many celebrities who dropped by.

To celebrate the launch of Cadillac’s newest vehicle, the XT4, Cadillac & Nas dropped a one-of-a-kind Cadillac crest piece and gold chain filled with yellow diamonds, black diamonds, rubies and sapphires. While Nas was signing custom Cadillac/Nas/Complex Merch he surprised a lucky fan by giving the chain to them, creating a once-in-a-lifetime moment with the most coveted drop at the event. 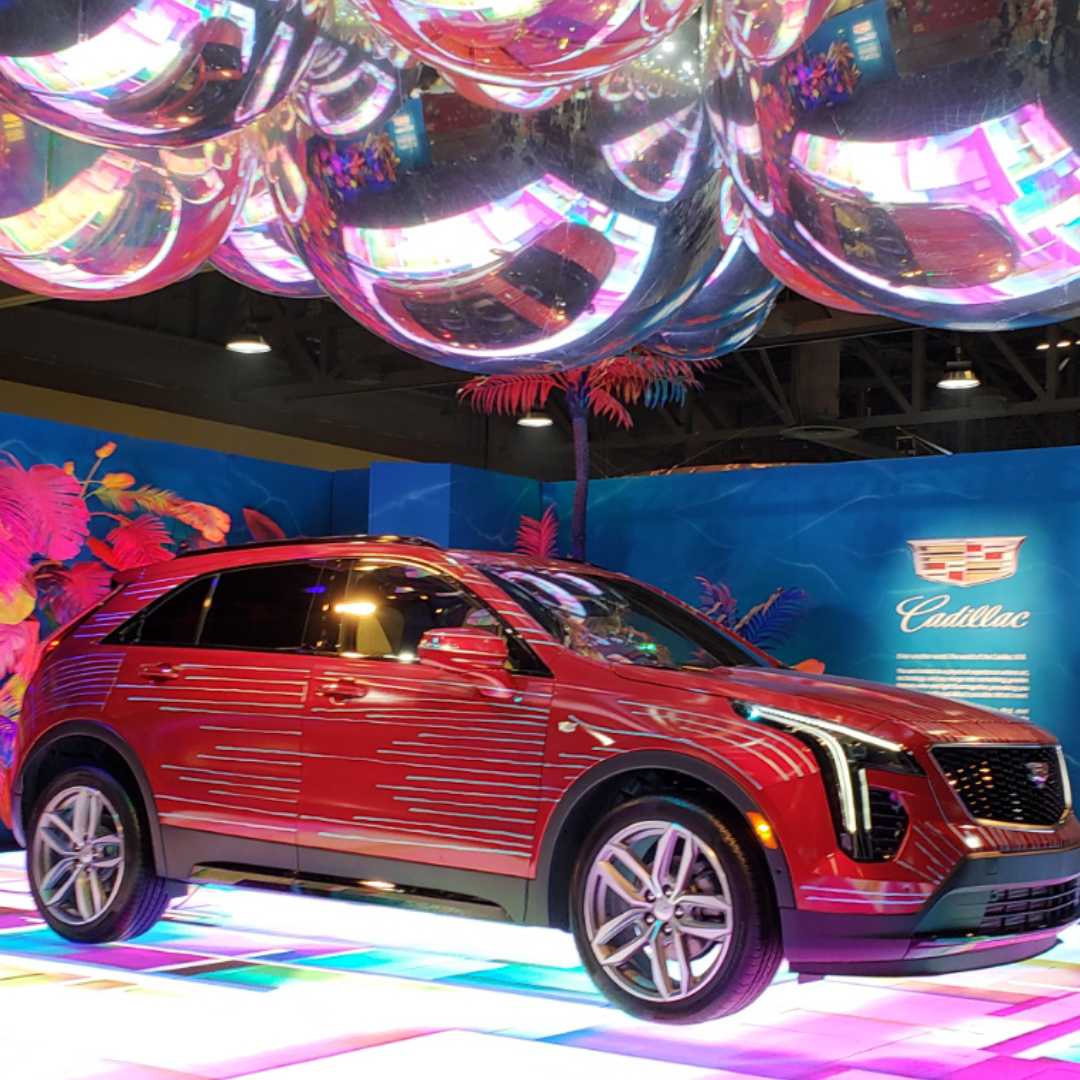 Virgil Abloh headlined ComplexCon(versations) to a packed house of 700 fans. He was joined on stage by emerging designers (b).stroy, comprised of Brick Owens & Dieter Grams, as well as Ev Bravado and Rhuigi.

Balvinhit the floor checking out the booths, posing for photos with fans, copping exclusive merch and more.

As part of Adidas Originals main event at ComplexCon, the brand joined forces with creative partner Pusha T to present a journey through three connected environments, reimagining a retro bank vault and penthouse office, to unveil a limited edition EQT Cushion 2 collaboration. Answering the popular demand for more cultural experiences, the mogul sat with 12 aspiring artists from Los Angeles for an opportunity at the adidas Originals Sound Labs Grant for musical development. Only five musicians made the cut after two days of listening sessions and now local LA semi-finalists Sareal, Lorine Chia, Ice Cold Bishop, Indiigo and Rugby Wild will continue the application process for the grant that will result in a winner in the first days of 2019. Also, King Push was joined by adidas Originals partner Pharrell Williams, who released pairs of the elusive adidas Originals N.E.R.D HU NMD and 50 pairs of never-seen-before PW HU P.O.D. System exclusive for the conference. Winners of the Friends and Family HU P.O.D. System pairs got to meet Pharrell as a special treat from the icon and Adidas Originals. And finally, Adidas Originals launched its new Los Angeles-focused social identity @AdidasLA alongside rap legend and creative ambassador Snoop Dogg. Coinciding with the 25th anniversary of Doggystyle, the brand partnered with Snoop and LA’s World Famous VIP Records for a special pop-up experience. Snoop himself made a special appearance and signed 25 pairs of adidas Originals P.O.D. System sneakers that had been customized by LA artist Gregory Siffs.

Reebok closed out the weekend with its limited-edition Futsal Fusion R58 drop and the final silhouette of the the R58 Series, the Sole Fury Floatride. Lil Baby stopped by in celebration of the drop, purchasing the first ten pairs for lucky customers in line before customizing shirts for his whole crew.

Karen Civil introduced film narrator Pharrell Williams at Universal Pictures’ special screening of THE GRINCH Saturday night ahead of of its upcoming release.

GUESS JEANS U.S.A. x PLACES+FACES debuted at ComplexCon ahead of its global launch. Unique items such as reflective tees, photo-vests, cargo pant and tracksuits were the first to go. J.Balvin, Teyana Taylor, Made in Tyo (Tyoko), Olan Prenatt, Trill Sammy, Christian BULL1TRC, and Premium Pete all stopped by GUESS Jeans U.S.A. to pick up the goods.

Becky G bounced around on the giant inflatable art installation from FriendsWithYou Art Collective at the POPSockets booth.