Check out these shows at Shrine Expo Hall this Fall!

Underoath with Dance Gavin Dance, Crown The Empire & The Plot In You Erase Me Tour

BROCKHAMPTON’s “I’ll Be There Tour”

Tickets for the 29th are available here!

Tickets for Dec. 8 are available here!

Don’t miss any of these and check them out before it’s too late!

The BMI Stage at Lollapalooza rocks on for day two of the famous festival. From pop and rock to hip-hop and EDM, the BMI Stage has a little something for everyone. Post-punk/rock band Mainland hits the stage first, followed by hip-hop blending emo rocker nothing,nowhere. Infamous trio CKY are prepared to show how far they’ve come since their days on the hit TV-series Jackass and Australian exports Chase Atlantic will keep the music pumping with their alt-pop vibes. Rising rap star, Buddy, will hit the stage next with a high energy set before R.LUM.R rounds out the performances with his signature smooth soul grooves.

Finding elegance in simplicity, California-via-Brooklyn band Mainland play a passionate blend of powerful rock rife with soaring choruses and chiming hooks that recalls garage-y New York City bands from the turn of the millennium. After independently releasing their Shiner EP in 2014, they landed a deal with 300 Entertainment as one of the label’s marquee acts. Following the release of the Outcast EP a year later, they dropped fan-favorite singles such as “Beggars” and “Permission Slip” – which both amassed over 1 million Spotify streams each. Between touring, the musicians recorded the songs comprising their 2018 full-length debut, led by the single “I Found God,” about the spiritual connection that arises when you experience real love communicated through sounds and visuals.

The enigmatic guise of Vermont singer/songwriter Joe Mulherin, nothing,nowhere. plays an introspective blend of hip-hop and guitar-driven emo rock. While he continually hides his face in videos and promotional photographs, Mulherin’s lyrics pull out all stops in baring his soul. His most recent album, Ruiner, is an emotive exercise in catchy catharsis.

Notorious in the 2000’s for their raucous sound and anarchic, hard-partying skate-punk aesthetic both onstage and off, Pennsylvania’s CKY are back with 2017’s The Phoenix, their first new album in eight years. While not necessarily a kinder, gentler ensemble, the CKY of 2018 is comprised of grown men who are feverishly devoted to delivering rock from its pretentious doldrums and serving up their music in as raw and authentic a manner as possible

Chase Atlantic was formed by brothers, Mitchel Cave and Clinton Cave, and their longtime friend, Christian Anthony. The trio produces, performs, and passionately conjures up dark alternative pop punctuated by rock and R&B. This Australian group blurs the lines between a nocturnal aesthetic and primal bliss on their 2017 self-titled debut for Warner Bros. Records. Since forming in 2011, the trio has packed multiple headline tours across Australia, released two successful independent EPs, Dalliance [2014] and Nostalgia [2015], and spawned a viral single with “Friends” which garnered over 2.7 million Spotify plays. Now, their first single “Church” invites everyone to congregate in their world.

While he hails from the hip-hop-heavy streets of Compton, CA, Buddy (a.k.a. Simmie Sims III) is devoted to a message of positivity. Initially signed by Pharrell and tapped for collaborations with Kendrick Lamar and Chance the Rapper, Buddy’s restless muse demanded that he pursue his own path, paving the way for his full-length album, Harlan & Alondra, a lush mix of retro R&B, chilled-out rap and jam-heavy funk, featuring cameos from A$AP Ferg and Ty Dolla Sign. “It’s beautiful day music,” says Buddy of his optimistic debut.

Broadly praised by outlets like NPR Music, The New York Times, Complex, Vibe, Billboard and Rolling Stone (who called him “an artist you need to know”), R. LUM. R, also known as Reginald Lamar Williams, Jr., is an ascendant R&B singer/songwriter creating warm, soulful music that is resonating with listeners. Romanced and inspired by the city’s song-storytelling tradition, R.LUM.R has settled in Nashville, where he’s been steadily building a following with his acoustic guitar, piercing falsetto and original songs. On his debut EP, After Image, all six tracks were recorded live in single takes, augmented by a string quartet. Asked to describe his music, he says “it’s ‘R&B/singer-songwriter/soul/electronic, but,” he adds, “I don’t want to limit myself.”

BMI (Broadcast Music, Inc.), the global leader in music rights management, is thrilled to announce the lineup for this year’s BMI Stage at Lollapalooza. From August 2nd – August 5th, 24 sensational artists on-the-rise will make their mark on the legendary stage, continuing its reputation for showcasing the industry’s future superstars. This year’s roster features an eclectic offering of musical acts ranging from emerging pop songstress Madison Beer and R&B sensation R.LUM.R, to the electronic lullabies of Vera Blue and the ever-evolving sound of John Splithoff.
Fan favorites such as Halsey, Bebe Rexha, Lady Gaga, Chance the Rapper, X Ambassadors, Cage the Elephant, A R I Z O N A, and more have all played BMI Stage before finding fame. Known as the place for music discovery and star-making sets, this year’s stage is no exception.
“The star power that has graced the BMI Stage is unparalleled,” said Samantha Cox, Vice President of Creative, New York. “Over the past thirteen years we have established a history of curating incredible new music experiences and giving audiences a first look at tomorrow’s headliners.”
For more information on the BMI Stage, please visit,www.bmi.com/lollapalooza and follow @BMI on Twitter for updates on your favorite acts. To join the conversation, use #BMILolla.
BMI is proud to present and sponsor stages at C3 Presents’ music festivals: Lollapalooza and Austin City Limits Music Festival (October 5 – October 7 and October 12 – 14). BMI’s partnership with these elite festivals is designed to offer more prime showcasing opportunities to its songwriters, a distinct priority of the organization. For more information on Lollapalooza, please visit www.lollapalooza.com; for information on the Austin City Limits Music Festival, visit www.aclfestival.com. 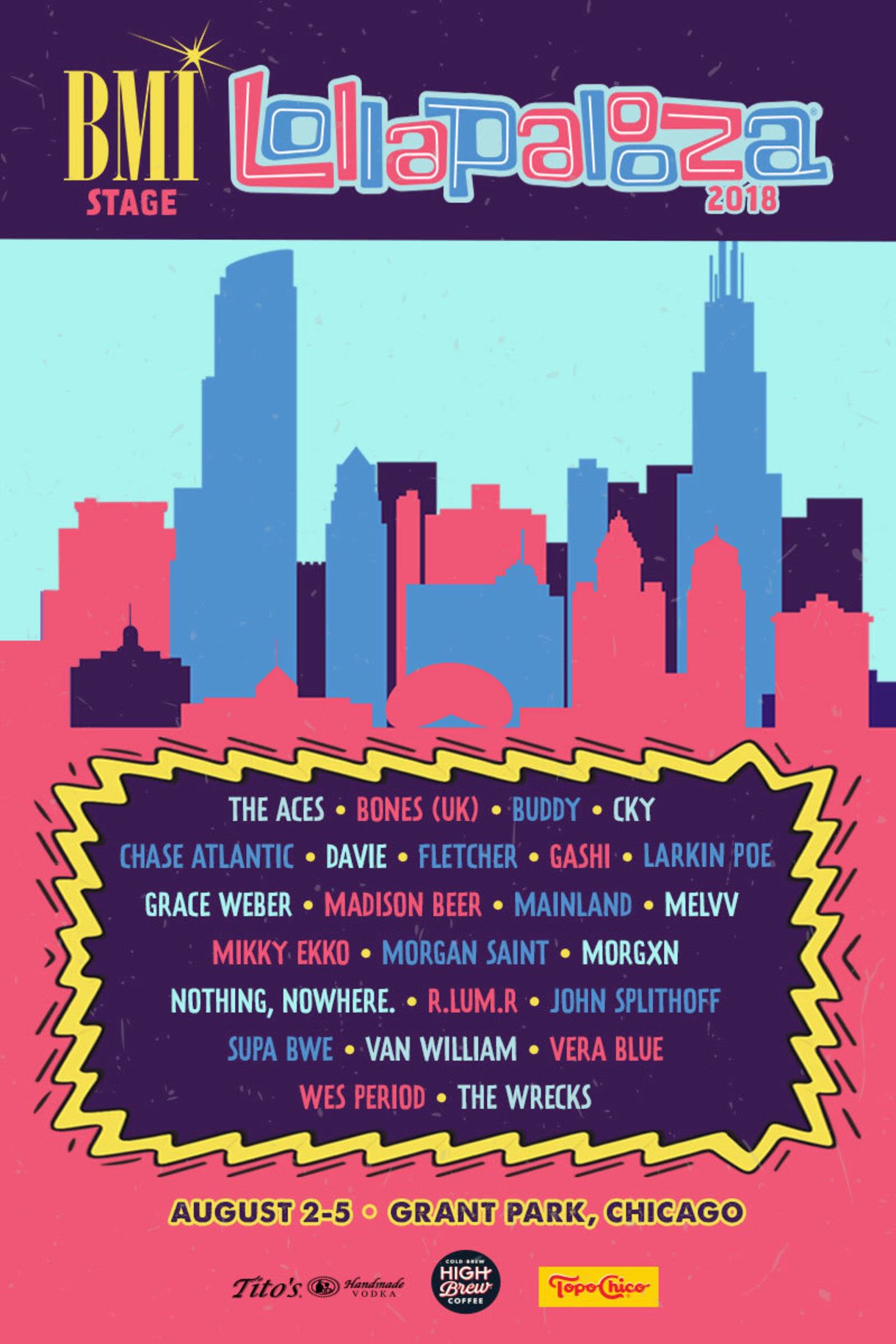 BMI STAGE SCHEDULE
THURSDAY, AUGUST 2nd
Larkin Poe | 1:00-1:40pm
Wes Period | 2:10-2:50pm
FLETCHER | 3:20-4:00pm
Gashi | 4:30-5:10pm
Supa Bwe | 5:40-6:20pm
Madison Beer | 6:50-7:30pm
FRIDAY, AUGUST 3rd
Mainland | 1:00-1:40pm
nothing,nowhere. | 2:10-2:50pm
CKY | 3:20-4:00pm
Chase Atlantic | 4:30-5:10pm
Buddy | 5:40-6:20pm
R.LUM.R | 6:50-7:30pm
SATURDAY, AUGUST 4th
Grace Weber | 1:00-1:40pm
DAVIE | 2:10-2:50pm
BONES (UK) | 3:20-4:00pm
Melvv | 4:30pm-5:10pm
Morgxn | 5:40-6:20pm
Vera Blue| 6:50-7:30pm
SUNDAY, AUGUST 5th
Morgan Saint | 1:00-1:40pm
Van William | 2:10-2:50pm
Mikky Ekko | 3:20-4:00pm
The Aces | 4:30-5:10pm
The Wrecks | 5:40-6:20pm
John Splithoff | 6:50-7:30pm
ABOUT LOLLAPALOOZA:
Launched by founder Perry Farrell in 1991 as a touring festival, Lollapalooza remains an innovator in festival culture 27 years later. Lollapalooza was the first festival to bring together artists from a wide range of musical genres on one bill, it was also the first to travel, the first to expand to multiple days, the first to introduce a second stage, the first to blend art and activism, the first to offset its carbon emissions, the first to put electronic dance music artists on the main stage, the first to create family friendly programming, the first to make its home in an urban city center and the first to expand internationally.
Lollapalooza has grown into an annual world-class festival in Chicago (2005), as well as culturally rich countries including Chile, Argentina, Brazil, Germany and France. Lollapalooza is one of the premier destinations both for music fans in the United States and abroad. The festival expanded to four days in 2016 in celebration of 25 years and continues to bring fans four full days of music and over 180 bands on 8 stages. In 2017 Lollapalooza brought in over 245 million dollars in local economic impact and has brought in over 1.2 billion dollars in total locally, since 2010.
Lollapalooza is produced by Perry Farrell, William Morris Endeavor Entertainment, and C3 Presents.
ABOUT BMI:
Celebrating over 77 years of service to songwriters, composers, music publishers and businesses, Broadcast Music, Inc.® (BMI®) is a global leader in music rights management, serving as an advocate for the value of music. BMI represents the public performance rights in nearly 13 million musical works created and owned by more than 800,000 songwriters, composers, and music publishers. The Company negotiates music license agreements and distributes the fees it generates as royalties to its affiliated writers and publishers when their songs are performed in public. In 1939, BMI created a groundbreaking open-door policy becoming the only performing rights organization to welcome and represent the creators of blues, jazz, country, and American roots music. Today, the musical compositions in BMI’s repertoire, from chart toppers to perennial favorites, span all genres of music and are consistently among the most-performed hits of the year. For additional information and the latest BMI news, visit bmi.com, follow us on Twitter @BMI or stay connected through Broadcast Music, Inc.‘s Facebook page. Sign up for BMI’s The Weekly™ and receive our e-newsletter every Monday to stay up to date on all things music.