On WE ARE, released earlier this year, Batiste presented a captivating musical experience to the world rooted in catharsis, joy, freedom, contemplation and sensuality. It’s a love letter to his southern roots and the heritage of Black Music with guest appearances by Mavis Staples, Quincy Jones, Zadie Smith, PJ Morton, Trombone Shorty, St Augustine Marching 100, his father Michael Batiste, grandfather David Gauthier and many more.

Now, Batiste continues the celebration by bringing a new cohort of guests into the fold, including singer Tori Kelly, who joins Batiste on the inspirational ballad “SING,” and BJ The Chicago Kid who joins Jon on the D’Angelo-infused “Adulthood.”  Big Freedia lends her signature joyful bounce to “FREEDOM,” “an exhilarating…celebration of independence” (Entertainment Weekly) and French star Abi Bernadoth joins Batiste on his empowering anthem WE ARE. Several new songs, including “WORK IT OUT” and “TELL THE TRUTH”–Uptown Remix–originally released on Batiste’s Record Store Day piece from 2020–will make their streaming and digital debut on October 15.

This year the musician’s hit song “I NEED YOU” reached #1 on the AAA Radio Charts and his album WE ARE debuted in the Billboard Top R&B Charts, Top Album Charts, and Top 200. His “I NEED YOU” music video has surpassed 13M views, he’s appeared on American Idol,  Live with Kelly and Ryan, The Today Show, The Late Late Show with James Corden, CBS This Morning as guest and co-host, and of course The Late Show with Stephen Colbert. Most recently, Jon Batiste continues his amazing year with stellar performances at Global Citizens Live and the Emmy Awards.

There is no better time for Jon Batiste’s song of the summer “FREEDOM,” a funk-driven 70s-pop banger that Entertainment Weekly called an “exhilarating, horn-heavy celebration of independence.”

Jon Batiste has had a good year. The Academy Award, Golden Globe, BAFTA winning musician’s hit song “I NEED YOU” reached #1 on the AAA Radio Charts, his album WE ARE debuted in the Billboard Top R&B Charts, Top Album Charts, and Top 200, his “I NEED YOU” music video surpassed 10MM views, he’s appeared on American Idol,  Live with Kelly and Ryan, The Today Show, The Late Late Show with James Corden, CBS This Morning as guest and co-host, and of course the Late Show with Stephen Colbert.

“We Are represents a vivid turn from straight jazz to joyful, danceable pop and neo-soul… a bold declaration of conscience…” –Vanity Fair

On WE ARE, Batiste presents a captivating musical experience to the world rooted in catharsis, joy, freedom, contemplation and sensuality. It’s a love letter to his southern roots and the heritage of Black Music with guest appearances by Mavis Staples, Quincy Jones, Zadie Smith, PJ Morton, Trombone Shorty, St. Augustine Marching 100, his father Michael Batiste, grandfather David Gauthier and many more. It is a meditation steeped in the sounds of the times with collaborators including POMO (Anderson.Paak), Ricky Reed (Lizzo), Jahaan Sweet (Drake, Eminem) and others.

“I’m publicly known for some things already,” says Batiste. “But there’s so much more to know about me. It’s always been there. Now is the time to show the world my full artistry.”

Batiste continues, “WE ARE is a message of love for humanity, of humble reverence for our past, and of a hopeful future, in which we are the ones who can save us. The art reveals its motive to you. You just have to wait for the Spirit to tell you what it wants.”

A special thanks to Coach for dressing members of the cast of the “FREEDOM” video.

About Jon Batiste
One of the best-known musicians of his generation, virtuoso pianist, singer, bandleader, educator and television personality Jon Batiste has spent his career bringing that music back to where it started — that is, with the people. From his days at Juilliard, where he established his Stay Human band by playing around New York City’s subways and in street performances he called “love riots,” to his work since 2015 as the bandleader and musical director of The Late Show With Stephen Colbert, the Kenner, Louisiana native has consistently channeled his superb technical skill and deep knowledge of jazz tradition towards a specific, intentional purpose: making people’s lives better and brighter, one harmonaboard (that’s harmonica and keyboard, combined) solo at a time.

Born into Louisiana’s legendarily musical Batiste family, Jon has performed and recorded widely since his teens. His flexibility as an artist, his fluency in jazz as well as popular music of all stripes, has allowed him to collaborate with legends from Wynton Marsalis, a mentor since his Juilliard days, to Prince — as well as many of the widely-varied artists who appear on the Late Show.

Batiste’s marquee performances have ranged from the Grammy’s, to the Kennedy Center Honors, to the US Open and the NBA All-Star Game — in 2015, Batiste and the Stay Human Band became the first group to play the main stage at both the Newport Jazz and Folk festivals.

Batiste played himself on the HBO series Treme and appeared in director Spike Lee’s Red Hook Summer — most recently, his music was featured in the 2020 Disney/Pixar film Soul. Batiste won a Golden Globe and Critic’s Choice Award for his participation in the soundtrack alongside Trent Reznor and Atticus Ross, and the trio are currently nominated for an Oscar and BAFTA for Best Soundtrack.

He’s been awarded the American Jazz Museum Lifetime Achievement Award, the Harry Chapin ASCAP Humanitarian Award and appeared on Forbes’ 30 Under 30 list; Batiste also currently serves as the Music Director of The Atlantic and the Co-Artistic Director of the National Jazz Museum in Harlem.

Jon Batiste is devoted to the education and mentorship of young musicians. He has led his own Social Music Residency and Mentoring Program sponsored by Chase, as well as master classes throughout the world. He has also led several cultural exchanges, beginning in 2006, while still a teen, with the Netherlands Trust, which brought students from the USA and Holland to perform with him at the Royal Concertgebouw and Carnegie Hall.

Batiste balances a demanding performance schedule with public speaking engagements, masterclasses, brand partnerships, community activism and acting roles. His composing and songwriting will be featured in his large-scale, genre-melding symphonic work “American Symphony,” set to premiere at Carnegie Hall in 2021 and he has been developing a Broadway musical about the life of famed painter Jean-Michel Basquiat.

Devon Gilfillian released the lyric video for his new top 15 AAA radio hit, “The Good Life.” The collage-style clip incorporates images that Gilfillian captured in Nashville during the BLM protests earlier this summer and opens with a powerful message that contextualizes it within the message of the song: “The fight for love, and the battle
against social injustice starts with understanding the struggles of people who don’t look like you. We will only find peace when we replace fear with love for all humans.”

“I wanted to write a song about how beautiful it is that someone has a different belief system, different skin color,
or comes from a different country,” says Devon Gilfillian. “This country is made up of people who came from many different countries. That’s what makes this country so beautiful. Only when we embrace each other’s differences with love, while ACTUALLY acknowledging each other’s past, will we find understanding and change.” “The Good Life,” a rallying cry for inclusion, is from Gilfillian’s debut album, Black Hole Rainbow, which was released by Capitol Records earlier this year. Streams of “The Good Life” skyrocketed after Gilfillian performed the song on “CBS This Morning Saturday.” He also performed the song during his recent KCRW In Residence and World Cafe sessions. Gilfillian performed the national anthem at NASCAR 2020 on the day they banned the Confederate flag. Gilfillian recently launched The Good Life Fund,
which will support organizations that are doing good in the world, including Give A Note Foundation and Rebuilding Together Nashville. To learn more or make a donation, visit https://joingenerous.com/good-life-fund-r5oh5.

American Songwriter hailed “The Good Life” as “[a] soul-soothing ode to finding peace and beauty in life.” The Tennessean hailed Black Hole Rainbow as “one of the best albums released this year, period.” The album also won a spot on Iowa Public Radio’s list of “The Best New Albums (So Far) Of 2020.” The New York Times said, “Devon Gilfillian, a soul songwriter based in Nashville, made his formidable debut album, ‘Black Hole Rainbow,’ with Shawn Everett…warping vintage sounds toward something deep and strange.” Gilfillian released his debut EP in 2016. The single
“Troublemaker” was heard during 2018 NFL Draft programming and advertising. He has played numerous festivals, including Newport Folk and Montreal Jazz. In addition to opening for Grace Potter, he has supported such artists as Mavis Staples, Local Natives, Lauren Daigle, KALEO, Michael McDonald, Chaka Kahn, Keith Urban, Gladys Knight, Brothers Osborne and Michael Franti & Spearhead.

TO PERFORM “NEVER EVER” ON “THE LATE LATE SHOW WITH JAMES CORDEN” AUGUST 8 AND “CBS THIS MORNING: SATURDAY SESSIONS” AUGUST 11 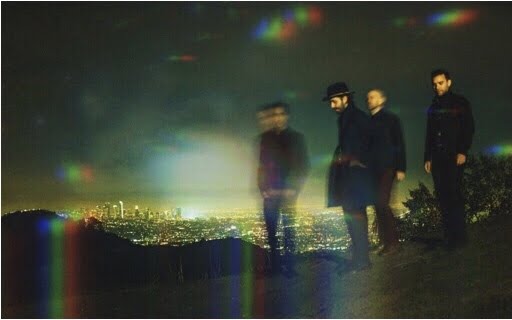 Lord Huron’s Spotify Singles debut today, including a performance of their hit single “When The Night Is Over” as well as a cover of Neil Young’s “Harvest Moon.” Listen/share the singles HERE.

Additionally, the band will preform “Never Ever” on “The Late Late Show with James Corden” on August 8 and will appear on “CBS This Morning: Saturday Sessions” on August 11.

The band’s acclaimed new album Vide Noir—out now on Whispering Pines/Republic Records—debuted at #4 on the Billboard 200 chart and continues to receive widespread critical praise. See below for what the press is saying about the album.

The group continues to take their lauded live show on the road this summer and fall, including headlining performances at Boston’s House Of Blues, as well as two shows each at Brooklyn’s Brooklyn Steel, Austin’s Stubb’s Waller Creek and Denver’s Ogden Theatre. See below for complete tour details, tickets are on sale now at http://lordhuron.com.

“Vide Noir adds touches of garage-rock distortion to a narrative of love and fortune found, inspired by classic pulp fiction writers like Raymond Chandler and illuminated by a mysterious emerald glow. It’s the spookiest entry yet in a growing catalog of the atmospheric, the melodic, and the arcane.”

and fuzzy upcoming third LP, the Dave Fridmann-mixed Vide Noir, to a large outdoor amphitheater near you.”

“More than ever before, it sounds like Lord Huron had the ambition and the confidence to take their sound to all kinds of new places, with no rules, and no concern for what anyone expects Lord Huron to sound like.”

“The tracks are robust and muscular, hitting on the tune-fulness and warm

melodies that fans of the band would expect, but sounding more ready than ever for the big stages that they will be playing.”

July 28—North Tonawanda, NY—Brews and Wines on the Water