Multiplatinum band Fitz and the Tantrums have announced additional touring plans for summer 2022. The run of dates—co-headlined with Andy Grammer—are set to kick off in Key West, FL on July 29th. Ticket pre-sales will begin this Wednesday, April 13, at 10 AM local time, with general on-sale starting this Friday, April 15, at the same time. For more information, please click HERE.

Fitz and the Tantrums frontman Michael “Fitz” Fitzpatrick said: “We cannot wait to get our fans together with Andy’s fans this summer and get everybody dancing. The wrong party tour is gonna go down in history as one hot, sweaty mess not to be missed. Were you there?”

Fitz and the Tantrums are also set to embark on a co-headlining run alongside St. Paul and the Broken Bones this summer. The run of dates are set to kick off in Asheville, NC, on June 1. Support on the first leg comes from Seratones; the second leg will feature Devon Gilfilian.

The LA-based band has been busy working on new material to follow up 2019’s ALL THE FEELS, which featured the top 10 hit “I Just Wanna Shine” and was supported by national television appearances on Jimmy Kimmel LIVE!, Good Morning America, and Live with Kelly and Ryan. In 2021, Fitz and the Tantrums’ frontman released his first-ever solo album, HEAD UP HIGH, under the moniker: FITZ. FITZ performed the album’s infectious title track on The Ellen DeGeneres Show, The Late Late Show with James Corden, and Good Morning America.

Stay tuned for more from Fitz and the Tantrums very soon.

About Fitz and The Tantrums

Over the course of four full-length albums, multi-platinum artists Fitz and the Tantrums have grown from independent upstarts to bonafide hitmakers. Beginning with their 2010 debut album PICKIN’ UP THE PIECES and its gold-certified single “Moneygrabber,” the LA-based sextet built a rabid fanbase with their infectious music and energetic live shows, which landed them a coveted spot on the Coachella Music and Arts Festival lineup. The band’s major label debut MORE THAN JUST A DREAM arrived in 2013 and spawned back-to-back platinum-certified singles in “Out Of My League” and “The Walker.” Following that breakout success, Fitz and the Tantrums returned with their 2016 release FITZ AND THE TANTRUMS, which featured their biggest hit to date, the double-platinum certified “HandClap.” Amassing billions of streams and attracting praise from Rolling Stone, Billboard, and more, the group has morphed into an arena-ready force, performing countless, sold-out headlining shows and marque music festivals around the world.

Aidan Bissett returns with an introspective, headbanging, feel-good anthem for anyone who’s ever been dumped. Listen to Dumped, which he co-produced with Ryan Daly (Fitz and the Tantrums, Adam Lambert, Cyn), HERE. After writing the guitar-driven break-up song, Bissett took to TikTok to explain how the track came together in this tongue-in-cheek clip.

Getting dumped is the worst feeling in the world, but screaming this song will make you feel a whole lot better, says Aidan Bissett. The song is about learning that you are better off on your own and that it’s okay to be alone.

Director Brooke James (Troye Sivan) matches the energy of Bissett’s performance with the vibrant, kinetic official video for Dumped. Holed up in a typical teen bedroom, Bissett thoughtfully unpacks his heartbreak on the verses, then rages with his guitar on the scream-along chorus as the camera spins and zooms with equal frenzy. View the video HERE.

Dumped is the follow-up to So High which Euphoria praised as a certified summer bop this song demands to be played after dark either by the pool or the beach with a fire roaring nearby and drinks being passed around among friends. The Honey Pop declared, Aidan Bissett is an artist that everyone needs to be paying attention to. We have a feeling this is only the beginning of his genius artistry.

Born in Florida, Bissett was raised on classic rock bands like Led Zeppelin and AC/DC. He moved to Oregon with his family when he was five and started playing electric guitar in second grade. When his family moved back to Florida, he began teaching himself to produce his own music. Just a year ago, Bissett released his first single,Different, which immediately gained traction online.

As he amassed a sizable following on TikTok, he next put out Worst Girls of All Time, an anti-love-song spiked with moody guitar riffs that landed on Spotify’s Fresh Finds playlist, and More Than Friends. Written, recorded, and produced entirely by Bissett, the songs earned him major buzz and landed the 18-year-old a deal with Capitol Records before he had even graduated from high school. Combined global streams of Bissett’s first three tracks and his Capital debut single, Communication are nearing 11 million.

Made with producer Andrew Wells (Young the Giant, Halsey, Fitz and the Tantrums), “My Own Monster” unfolds as a seductive and surreal piece of storytelling, examining themes of alienation, emotional risk, and the desire to break free from pain. “It’s a song about someone who has a voice inside their head,” reveals X Ambassadors lead singer Sam Nelson Harris. “There’s something evil about the voice, but the person is attracted to that and ultimately decides, ‘I’m going to embrace this awful thing, let it be my best friend and let it protect me. What could possibly happen?’” To create the powerful tension that propels “My Own Monster,” X Ambassadors merged the track’s sinister groove with dreamy Mellotron textures and Theremin-like guitar tones specifically selected for their otherworldly effect.

With their highly awaited third album due out later this year, “My Own Monster” marks the start of a compelling new lyrical direction for X Ambassadors.  “My Own Monster” is the first new music from X Ambassadors since their hyper-creative multi-part project (Eg). A three-song effort released in early 2021, (Eg) found the band collaborating with a series of similarly forward-thinking artists, including Earl St. Clair, Terrell Hines, and Jensen McRae.

ABOUT X AMBASSADORS
X Ambassadors made their full-length debut with VHS, a 2015 release that saw the band transition from Ithaca alt-rockers and Brooklyn-indie-scene outsiders to Billboard stalwarts. Now certified platinum, VHS provided an intimate look at Sam Nelson Harris and his brother Casey Harris’s youth, delivering the genre-defying hits “Unsteady” and “Renegades” and leading to a three-year global touring odyssey as well as a string of high-profile festival performances. VHS was followed by X Ambassadors’ 2019 sophomore album ORION, which they supported with an extensive headline tour of the U.S. A project inspired by ’60s and ’70s soul and R&B, the band’s Belong EP arrived in March 2020.

Today, Donna Missal shared “How Does It Feel,” the soaring slice of luscious shoegaze that opens her new album, Lighter, which will be released on July 10 via Harvest Records. Download/stream “How Does It Feel” HERE and listen on YouTube HERE.

Donna – who has amassed over 33 million global streams in her career to date – wrote the track with Andrew Wells (X Ambassadors, Bebe Rexha, Fitz and the Tantrums), who produced the album, and Anthony Rossomando, whose credits include co-writing the Oscar-winning song “Shallow.”

“I hope this song finds the cracks in your heart and fills them with light,” says Donna Missal. “I hope this song can turn your disconsolateness into aspiration, and wrap its arms around you the way I wish I could right now. I hope this song meets your unrest with a challenge to desire and believe in dreaming for more.”

Lighter is an album about fragility, self-acceptance and self-discovery. It’s a timeless work from an artist who’s not playing by anyone else’s rules. Fans who pre-order the album in digital format will instantly receive “How Does It Feel” plus the singles “Let You Let Me Down” and “Hurt By You.”

“Donna Missal is a powerhouse vocalist” declared Flaunt in this recent feature article. MTV News observed, “‘Let You Let Me Down’ [is] a rock-infused breakup ballad…Her smoky vocals simmer to a satisfying crescendo in the final refrain.” The Honey Pop noted, “[Donna] can pull you through various emotions just with her voice, and ‘Let You Let Me Down’ is a prime example of her talent. It’s got powerful, poetic lyrics… a self-realization anthem.” “Hurt By You” was named as one of the “Best Songs Of The Spring” by Refinery29. NYLON noted, “This song was made for rolling the windows down and speeding on the backroads.” Praising Donna’s 2018 debut album, This Time (Harvest Records), Earmilk said, “A sound like this cannot be missed…we’re in full orbit around this star.”

With the Packers season kicking off, Packers fans and Wisconsin residents are all looking forward to seeing the team take the field in the coming weeks. This year, the excitement is spreading across the pond to British musician Barns Courtney and his band. A Packers staff member heard the up-and-coming musician’s song “Glitter and Gold” and immediately knew it would catch on with Packers fans, especially if the song was re-recorded as “Green and Gold.”

With his recent album release and North American tour, including a stop at Summerfest in Milwaukee in June and at Lollapalooza in Chicago last weekend, Courtney was happy to lend his voice and music to the energy of the coming football season. 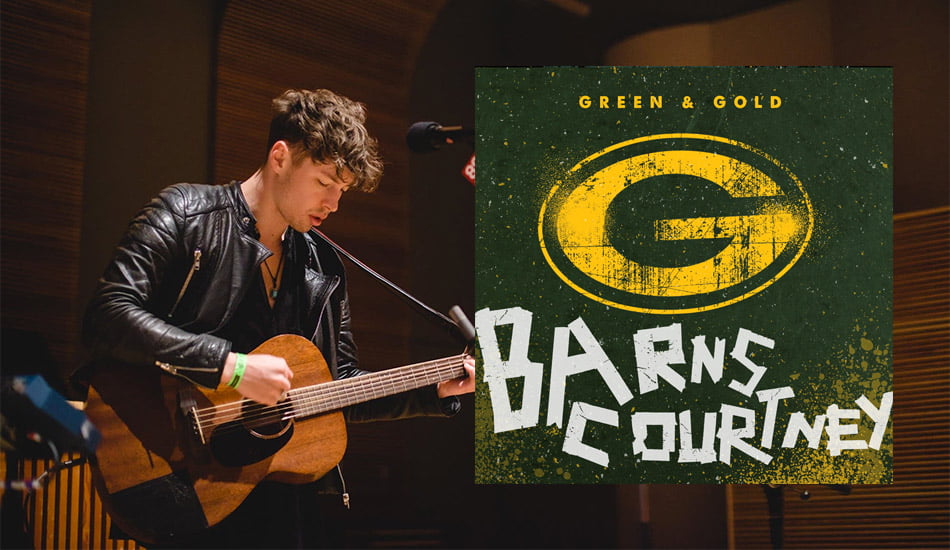 Fans can download the “Green and Gold” version of Courtney’s song at http://barnscourtneyshop.com/products/green-gold.

“The struggles I experienced when I lost my first record deal, and the drive to succeed in the face of adversity runs parallel to the challenges in football,” said Courtney. “You need the same fire in your belly to play professionally be it in music or in sports. If I didn’t feel a personal connection to the subject matter, I wouldn’t write about it. I try to be as honest as possible in my lyrics. So with that in mind, I tried to find as many parallels as possible with the Packers’ world and my own.”

Courtney’s debut album, “The Attractions Of Youth,” will be released Sept. 29.

Billboard has said, “Barns Courtney lit up the crowd at El Rey Theatre in Los Angeles….His deep George Ezra-esque vocals with the husky Americana rhythm of Mumford & Sons, along with his attention-grabbing stage presence left no boring moments throughout the concert.” His shows are consistently recommended as picks of the week by such publications as buzzbands.la and The Dallas Observer, which noted, “His raspy vocals, genuine talent and nod to early R&B make his music a must-listen.” Listen SD observed, “Barns Courtney will make you swoon with his special brand of bluesy folk-pop. We love his song ‘Fire’ but frankly all of his songs are fire.”

The young artist has already surpassed 45 million combined streams globally – including more than 22 million streams in the U.S. “Hands,” from his debut EP, The Dull Drums, was tapped for a recent commercial while “Fire,”a Top 5 hit at Triple A radio and a Top 15 hit at Alternative, has been heard in several ads and for the FIFA 17 trailer. “Glitter & Gold” climbed to #1 on the Spotify UK Viral Chart and has been heard in promotional spots for Miller Lite and the critically acclaimed film The Founder. Barns Courtneyhas opened for The Who at London’s Wembley Stadium and has also supported Ed Sheeran, Elle King, Blur, Fitz and The Tantrums, Tom Odell and The Libertines.