Vaughn Lowery, founder and publisher of 360 MAGAZINE, pens poignant prose. Move Like Water × Be Fluid is a stunning memoir documenting the author’s journey from a childhood in the Detroit’s subsidized, section 8 housing to a successful career in fashion and media. The arc of this remarkable passage twists and turns in surprising ways, ensuring readers will believe in the concept that this life truly is what you make it. The text will debut as an exclusive multi-volume installation within 360 MAGAZINE and marks the inception of the brand’s foray into publishing.

This provocative coming-of-age story explores the power of branding strategy, a technique the writer developed at an early age and carried with him throughout his lifetime. Lowery, from the time he was a young child, is able to comprehend that one’s innate, individual self is their greatest commodity in life. Through the highs and lows that inform his experience, he stays true to that ideal. Lowery puts forward a raw and compelling narrative of a child, and later a man, who repeatedly picks himself up, reimagines his life, and finds innovative ways to move forward. The self-empowerment so emblematic in Lowery’s character and story promotes readers to adopt the author’s tactics in their own lives.

The influence of prominent civil rights leader Joseph Lowery, the writer’s grandfather, is prevalent in this work. A beacon for both hope and progress during the Civil Rights Movement, the legacy of Joseph Lowery weighs heavily on the narrator. This, along with his upbringing and existence as a black man in America, make Lowery both introspective and contextually aware when it comes to race. Moreover, draws parallels between the movement his grandfather championed and led, and the Black Lives Matter movement of today, exposing the failures of our system and calling for meaningful, systemic change. Both Joseph and Vaughn Lowery are members of the first intercollegiate historically African American organization Alpha Phi Alpha. Lowery simultaneously considers the work he can do, as a singular human being, to forward social justice causes in his day-to-day life and interactions with others.

In 1920, his grandmother, Agnes Christine Moore Lowery (the little girl in the blue dress, also a member of Alpha Kappa Alpha), came with her grandmother to become the first black to vote in Tennessee. The kids’ book, The Big Day, depicts their journey the day she voted, now available on Amazon here. 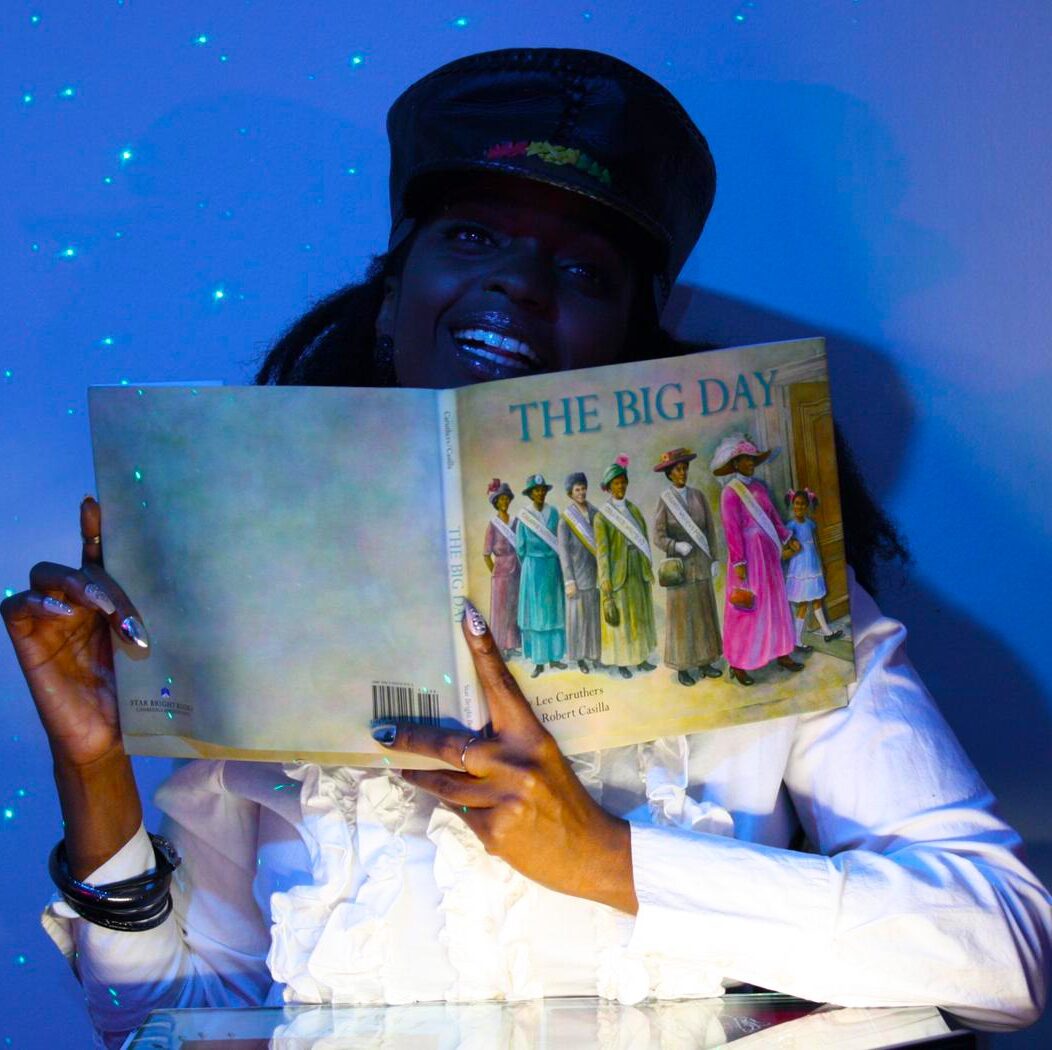 360 Magazine is also now selling one of a kind home goods via Chairish, a curated marketplace for the best in vintage and contemporary furniture, decor and art. Check out this piece designed by 360’s founder Vaughn Lowery.

In the year 2020, which has been afflicted with an overwhelming amount of change, there has never been a timelier moment for insight from a man like Lowery. As mentioned, Lowery’s deep ties and connections to racial justice in America feels incredibly relevant, as do his thoughts on digital media, something Lowery pioneered years before COVID-19 forced the world hurriedly online. Constantly at the forefront of social change, Move Like Water × Be Fluid offers an understanding of the current moment, yet looks forward to the possibility of an evolved, cosmopolitan world. One that Lowery aspires to through all his works, including this installation and 360 MAGAZINE.

As we follow the author through grade school, high school and on through Cornell University, we collect advice from a myriad of powerful secondary characters. From all walks of life, these secondary support systems offer Lowery the push he needs to continue on striving towards something better. We watch Lowery model the work ethic of his admired older sister, gain confidence from an encouraging teacher, change the trajectory of his life due to a neighborhood mentor, and learn from the critique of a Residential Advisor. This self-help-book stands apart for never failing to appreciate the importance of an individual’s support system. Fittingly, while the book catalogues Lowery’s journey to success, it inspires and encourages readers in the same way Lowery’s community uplifted him – to take action towards a meaningful life.

Comparable titles to Move Like Water × Be Fluid include other stories of individuals who later turned to publishing their experiences in self-help books. Numerous celebrity examples include Becoming by Michelle Obama, Shoe Dog by Phil Knight, or The Path Made Clear by Oprah Winfrey. These titles, as well as Lowery’s first book, all feature introspection and explanations regarding the course of the authors’ lives.

The following descriptions outlines the chapter-by-chapter journey within Move Like Water × Be Fluid.

Chapter 1: The beginning of Lowery’s journey is marked by his complicated childhood in Detroit, distinctly connected to his sense of place and community. Financial struggles and surroundings reminiscent of the song “Gangsta’s Paradise,” as well as the author’s early experience with assault contextualize the course of Lowery’s life.

Chapter 2: A childhood mood, coupled with the realization of his intelligence, swiftly changed the direction of Lowery’s life. Following a move to New Jersey to live with his older sister, Lowery’s early experiences of racism shine a light on his passion for racial justice today. The opportunity to participate in an honored education program again changes the trajectory Lowery follows.

Chapter 3: This chapter offers insight into the ups and downs of high school, a narrative many are familiar with. Yet, Lowery’s poised observations throughout the chapter reflect his early understanding of the world.

Chapter 4: After a remarkable yet complex journey through high school, Lowery achieves the first of many dreams by gaining the chance to attend Cornell University in New York. At Cornell, he is able to expand his understanding of self and what he hopes to accomplish.

Chapter 5: Saks Fifth Avenue recruits Lowery to work in their corporate office, marking Lowery’s first foray into the world of economics and fashion. The advice he gains from mentors in the field prompts him to shift towards a career in acting and modeling, supplemented by working in the Medicare Department of U.S. Healthcare.

Chapter 6: New York, in all its hectic nature, pointed Lowery west towards California where he could further capitalize on his talents in the entertainment industry.

Chapter 7: This chapter details one of the events in Lowery’s life for which he is best known: his commercials as “Joe Boxer Guy” that overwhelmed the nation. Following ups and downs in Los Angeles, this success cemented Lowery’s understanding of his own talents as well as his ties to L.A.

Chapter 8: Following an offensive home invasion, Lowery pivots to continue embracing what life throws at him with appearances on NBC’s “Scrubs” and “America’s Next Top Model.”

Chapter 9: With plenty of capital and the space to complement his next steps, Lowery founded 360 MAGAZINE in 2008, powering through the tidal wave that was the recession all due to his own brains and the belief in his product and brand.

Chapter 10: After another painful reminder of the inadequacies of the justice system in America due to an unjust prison stay, Lowery’s comprehension of what is truly important is once again realigned. Despite his negative experiences, his magazine is able to be on the cutting edge of the Los Angeles scene.

Chapter 11: The number 360 is ubiquitous to Lowery – one embodies the other. His appreciation for both his own capabilities and expertise, as well as the ones of others, assures his magazine and brand are constantly evolving.

Chapter 12: Thinking on the future following the tragic death of a friend, Lowery is nowhere near finished and is more than ready to continue is many metamorphoses. He now exists in a space where he strives to empower others, all around the world. 360.

Move Like Water x Be Fluid, by Vaughn Lowery, is available this month exclusively on the 360 MAGAZINE’s website. 360 MAGAZINE has received numerous accolades, and has recently been featured on Dancing with the Stars. Stay in touch by following both Lowery (@vaughnlowery) and 360 (@360magazine)

Additionally Vaughn has an audio book titled, “Say Uncle: The Story of Vaughn Lowery” which loosely based on his childhood. It is available for here on Amazon Music. For additional info on Vaughn Lowery visit Wikipedia and IMDb.

Signed copies of Vaughn’s memoir, Move Like Water × Be Fluid, are available in our shop.