Jubilee released last June as one of the years leading, critically acclaimed albums. The album stole spots on Best Of lists for 2021 from Rolling Stone, People Magazine, Pitchfork, Entertainment Weekly, Billboard, NPR, Wall Street Journal, The Ringer, SPIN, Esquire, Vulture, The AV Club, Paste, Cosmopolitan, UPROXX, Consequence of Sound, Slant and Hypebeast. The album gained so much attention that it was even voted the #1 album of the year on NPR’s Listener’s Poll and #1 on UPROXX’s Critics Poll.

If that wasn’t enough success for one year, Zauner, too, published her New York Times Best Seller, Crying in H Mart, which is now being reworked for MGM’s Orion Pictures. The book is a moving memoir that captures Zauner’s experiences growing up Korean American, the struggles she went through with the death of her mother and how she navigated discovering her own identity.

The Korean American musician and author Michelle Zauner is renowned for her sonic demeanor. Born in Seoul, South Korea, Zauner grew up in Eugene, Oregon for most of her adolescence. Zauner took to music instantly, beginning to learn to play the piano at 5, later moving to the guitar at age 15. Her mother’s passing in 2014 lead to her starting Japanese Breakfast. She tells Teen Vogue, “I moved back to Oregon to care for her, and I kind of put the band on indefinite hiatus. Unfortunately, she passed away, and while I was in Oregon, helping take care of the house and being a support system for my dad, the only way that I could have something for myself was if I made my own record. So I kind of carved out some time to do that.” Japanese Breakfast’s debut came in 2016 with the hit album Psychopomp. Through the album, Zauner revealed the intense period that followed her mother’s death. Zauner’s unique perspective amongst mainstream pop music sets her apart from other artists, and she’s one you’ll want to take a listen to.

Paired with the announcement of the extended edition, Halsey, too, released the lyric videos for both “Nightmare (Reprise)” and “People disappear here,” with brand new visualizers for the songs apart of the album. Access the visualizer playlist HERE. During the holiday season, Halsey allocated live versions of the tracks from the album. Watch those live videos HERE.

In addition to the critically acclaimed album, Halsey’s If I Can’t Have Love, I Want Power Film Experience was quite the hit. The limited run of the film sold out in over 70 theaters around the world, breaking nearly $1M at the box office. The film is now available for rental or purchase on iTunes, Amazon and Google Play. The film, written by Halsey and directed by Colin Tilley, can be viewed HERE.

If I Can’t Have Love, I Want Power debuted at No. 1 on Billboard’s Top Current Albums chart. This album was Halsey’s third release in a row to top this tally, and it also landed at the No. 1 spot on Billboard’s Alternative Albums, Vinyl Albums and Tastemaker Albums charts, coming in at the #01 position on the Spotify Top 10 Global Album Debuts chart.

Track Listing If I Can’t Have Love, I Want Power Extended Edition

Death of Classical will continue its third season of The Angel’s Share this August, with the innovative PUBLIQuartet performing in the Catacombs of The Green-Wood Cemetery on August 4, 6, and 7. The Angel’s Share is the Death of Classical’s second concert series, curated by the creator, curator, and leader of the series, Andrew Ousley, in partnership with Green-Wood. The perform will take place in the Catacombs of The Green-Wood Cemetary in Brooklyn, New York City.

The quartet will perform a program inspired by its GRAMMY-nominated 2019 album Freedom and Faith, featuring works that celebrate women composers through the ages, and explore ideas of spirituality, resilience, and inspiration.

Performances of Freedom and Faith will take place over the course of three evenings, with two performances per night, and include music by Nina Simone, Ella Fitzgerald, Jessie Montgomery, Hildegard von Bingen, as well as original MIND THE GAP compositions by PUBLIQuartet.

The innovative, barrier-breaking string quartet performs a program inspired by its GRAMMY-nominated album Freedom and Faith, featuring music that celebrates women composers through the ages, and explores ideas of spirituality, resilience, and inspiration.

The ensemble is innovating the performance of classic music and opera by incorporating free-flowing improvisational instrumentation and group compositions into their exhibitions. Death of Classical represents a modern take on timeless classic compositions by giving a voice to emerging performers and underrepresented composers. While many people say “Classical Music is Dead,” this group’s revitalized take on classical music allows for the group’s performances to reach new, younger, unexpected audiences then ever before. With their innovative and exciting twist on the performing arts, Death of Classic is reviving a passion for the genre.

Each performance includes a pre-concert reception with a whiskey tasting overlooking the Manhattan skyline and harbor at sunset, with distilleries including Madre Mezcal, Appalachian Gap Distillery, Ume Plum Liqueur, and more

The Angel’s Share series takes its name from the distiller’s term for whiskey that evaporates while maturing in the barrel, thus going to the angels. Accordingly, the live concert events on August 4, 6, and 7 will open with a spirits tasting, with distilleries including Madre Mezcal, Appalachian Gap Distillery, Ume Plum Liqueur, and more. The Angel’s Share is curated by Andrew Ousley and co-presented by Death of Classical and The Green-Wood Historic Fund.

JESSICA MEYER: Get into the Now (2017)
The Pull
Years of In Me
Go Big or Go Home

Applauded by The Washington Post as “a perfect encapsulation of today’s trends in chamber music,” and by The New Yorker as “independent-minded,” the GRAMMY nominated PUBLIQuartet’s modern interpretation of chamber music makes them one of the most dynamic artists of their generation.  Dedicated to presenting new works for string quartet, PUBLIQuartet rose on the music scene as winner of the 2013 Concert Artists Guild’s New Music/New Places award, and in 2019 garnered Chamber Music America’s prestigious Visionary Award for outstanding and innovative approaches to contemporary classical, jazz, and world chamber music.  PQ’s genre-bending programs range from 20th century masterworks to newly commissioned pieces, alongside re-imaginations of classical works featuring open-form improvisations that expand the techniques and aesthetic of the traditional string quartet. 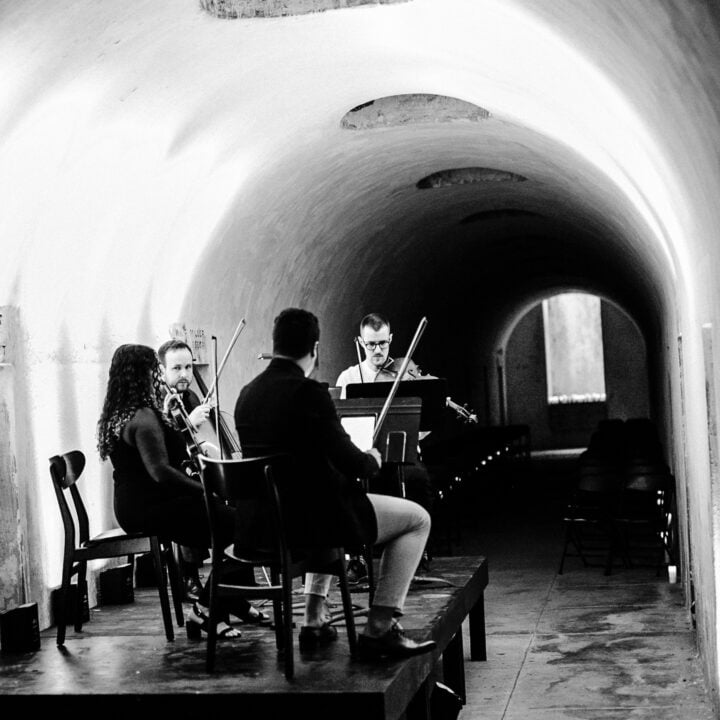