“Jaguar Century” is a lavishly illustrated large-format retrospective examining 100 years of Jaguar, one of the most acclaimed marques in automotive history. Established in 1922 by William Lyons and William Walmsley, the Swallow Sidecar Company transformed into one of the auto industry’s most revered car brands, synonymous with performance and luxury. “Jaguar Century” chronicles this company and its remarkable vehicles, from the 1935 Jaguar SS sporting saloon to today’s F-Type sports cars, F-PACE SUV, and X-Type sedans—filled with images, history, and in-depth analyses of the incredible cars Jaguar has created year after year.

Automotive historian Giles Chapman showcases how company visionaries developed the brand in the trying economic times leading up to World War II before resetting Jaguar during England’s bleak postwar years. “Jaguar Century” will make a great addition to any holiday gift list, just in time for the marque’s 100 anniversary next year. 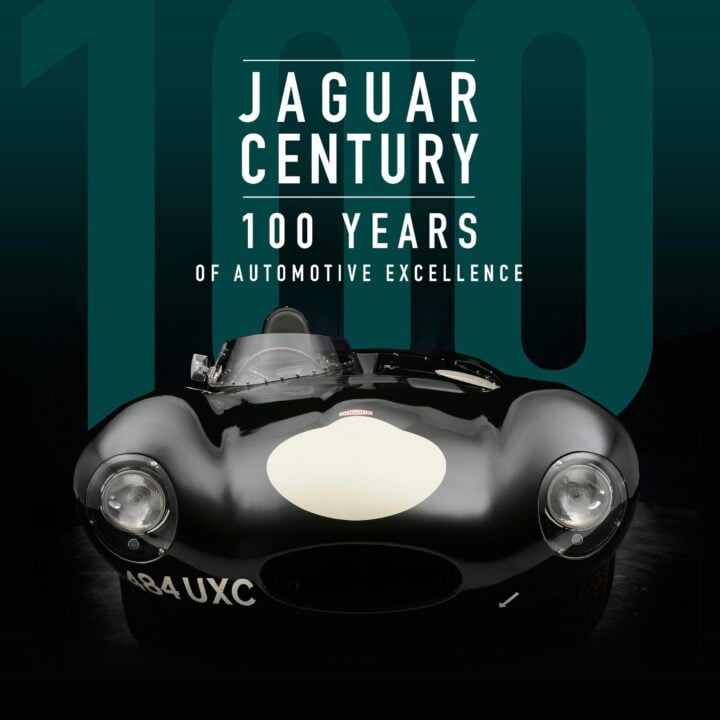 What is Damanhur? It is an alternative way of life. A societal model for the betterment of humanity, an experiment in human consciousness. A collective of people devoted to the sustainability of communal living; an ecovillage and spiritual community based in Northern Italy. Founded by Falco Tarassaco in the mid-70s, Damanhur has grown from humble beginnings to become a prime mover in spiritual-artistic standing and research and the ecological protection of the planet.

In Jeff Merrifield’s book, he writes with reverence about this community that has fascinated him for over two decades. His book is an introduction to the intricacies, philosophies and structures of the seemingly closed-off Damanhur, the guide to the lessons of this community.

“Move Like Water × Be Fluid” is a stunning memoir documenting the author’s journey from a childhood in the Detroit’s subsidized, section 8 housing to a successful career in fashion and media. The arc of this remarkable passage twists and turns in surprising ways, ensuring readers will believe in the concept that this life truly is what you make it. The text will debut as an exclusive multi-volume installation within 360 MAGAZINE and marks the inception of the brand’s foray into publishing.

This provocative coming-of-age story explores the power of branding strategy, a technique the writer developed at an early age and carried with him throughout his lifetime. Lowery, from the time he was a young child, is able to comprehend that one’s innate, individual self is their greatest commodity in life. Through the highs and lows that inform his experience, he stays true to that ideal. Lowery puts forward a raw and compelling narrative of a child, and later a man, who repeatedly picks himself up, reimagines his life, and finds innovative ways to move forward.

Move Like Water x Be Fluid is available in PDF format on Blurb.

Move Like Water x Be Fluid is available in hard copy format at Amazon, Barnes & Noble, Google Books and Target.

Signed copies of Vaughn’s memoir,  Move Like Water × Be Fluid, are available in our shop.

Already a recipient of starred reviews from Publisher’s Weekly and Kirkus Reviews, Louie Chin’s “Bodega Cat” has been selected by the Junior Library Guild as a Spring 2020 Gold Standard in the City Elementary category. Referred to as “the subscription box for the modern librarian,” the Junior Library Guild plays a pivotal role in stocking library inventories nationwide with the highest caliber of books for children. Of the thousands of applicants, only 3% receive this annual distinction and over 95% of JLG Gold Standard books go on to win other book awards. Congratulations to Louie Chin, and to editor Jordan Nielsen!

Born and raised in New York, Louie Chin is an illustrator who creates commercial and editorial content. He has always been an animal-lover, and there is one family pet in particular from which he drew inspiration for “Bodega Cat”: a spirited and feisty orange tabby cat named Simba. His favorite bodega order is coffee and an egg and sausage sandwich on a toasted roll. “Bodega Cat” is the first book that he both wrote and illustrated. He currently resides in Brooklyn, New York.

“The Fragile Skin of the World” by Jean-Luc Nancy

The world is everything that passes between us – ourselves and everything that happens to us, everything that becomes of our contacts, our gazes, our movements; and through referrals from skin to skin, from the fleeting to the immemorial, you reach without even knowing it the entire actuality of the world: the act of its existence. This act is made up of works and disasters, splendors, horrors, and catastrophes. As long as it is ours, it is the act of an infinite emergence that is all the sense there is: a sense that incessantly goes from skin to skin and is itself never enveloped by anything.

The texts in this volume are all oriented by the concern for what is currently happening to us – we, late humanoids – when we arrive at an extremity of our history, whether this extremity should turn out to be a stage, a rupture, or quite simply a last breath.

Jean-Luc Nancy is Professor Emeritus of Philosophy at Université Marc Bloch in Strasbourg and teaches Political Philosophy and Media Aesthetics at the European Graduate School in Saas-Fee. “The Fragile Skin of the World” will be published in November 2021.

“Passion for Practice with Musings From Music Masters” by Becky Chaffee

Becky’s new book for anyone playing an instrument, Passion For Practice With Musings From Music Masters, is an imaginative visual presentation expressing music practice concepts. Whether you take private lessons or you learned an instrument in grade school and need to take some lessons to get started again, this book will encourage you. The better you are, the more fun you’ll have. Regular practicing can be rough, but Ms. Chaffee’s book helps you to practice smarter, making it more of a fun challenge than rote practice.

Both an art book and a practice reference book, Passion For Practice With Musings From Music Masters contains personal practicing stories and suggestions from musicians around the world, including famous musicians, Grammy award-winning musicians, and principals of sections in major orchestras on all instruments. You might also enjoy her first book, Have Fun With Your Music to inspire young musicians to make practicing their own. Buy this book to inspire music practice or as a gift for a music teacher’s studio.

Becky Chaffee grew up in a musical household and raised two musical children. She has degrees in civil engineering from UC Berkeley and Cornell University. She enjoys playing flute for her music club. Through her music gifts company, Becky raises funds for music education and has distributed $1,000s to youth. Much of the artwork in her books is presented on note cards, prints and Tee shirts that sell in music stores and symphony gift shops such as the Brevard Music Center, Nashville and San Francisco Symphony Gift Shops, SW Strings, and so on.

Framed within the common goal of advancing trade justice and South-North solidarity, The Fair Trade Handbook presents a broad interpretation of fair trade and a wide-ranging dialogue between different viewpoints. Canadian researchers in particular have advanced a transformative vision of fair trade, rooted in the cooperative movement and arguing for a more central role for Southern farmers and workers. Contributors to this book look at the issues within global trade, and assess fair trade and how to make it more effective against the broader structures of the capitalist, colonialist, racist and patriarchal global economy. The debates and discussions are set within a critical development studies and critical political economy framework. However, this book will appeal to a wide range of readers, as it translates the key issues for a popular audience.

The story of Chrysler Corporation’s 1990s image-building V10-engined sportscar – now in eBook format! The Viper stunned Americans by showing that Dodge, known for tame cars and minivans, could make a brutal monster of a sports car. At Le Mans, Team Viper showed they could handle turns, too, winning its class at a fraction of the usual cost. This book covers the Viper from concept to rough rocket to world-class supercar.

This is not just a gushing tribute to the Dodge Viper, the author provides an objective view of the full story, using business, historical, and enthusiast perspectives. The book looks at the business case for each generation, the development stories and their outcomes, and describes some of the issues owners may have to watch out for, particularly in the early models.

Princess Lilla finds herself tasked with recruiting the biggest and most dangerous army in the Seven Galaxies. However, the Teryn Emperor will not cooperate unless Lilla earns the blessing of the Guardian Goddess Laoise – no simple task! Is she willing to pay the price to bring her people a second chance at a new beginning?

Perfect for fans of Sarah J. Maas, Leigh Bardugo and Emily Skrutskie, this compelling and adventurous tale is set in a rich sci-fi fantasy world. The True Teryn is a captivating coming-of-age story with a diverse cast of characters, a powerful female lead, and a beautiful overarching message: you don’t have to be perfect to be a hero.

“At the heart of The Last Lumenian series, is the story of how young women struggle with today’s critical challenges, including: mental health, personal freedom, self-esteem and managing relationships amidst overwhelming expectations,” says Blaise. “I love hearing from my readers, how inspired they are by Princess Lilla, taking brave action in their own lives.”

The 1619 Project: A New Origin Story by Nikole Hannah-Jones

The 1619 Project comprises 18 essays, and 36 poems and works of fiction, all revolving around slavery in America, and how it continues to play a role in our society. By exploring America’s long past with slavery, the root of modern racism can be revealed. It’s both a deeply provocative and highly upsetting work. It doesn’t work to display a bright future for America, but instead provides a revealing, if depressing, narrative on the American experience.

This work acts as an expansion of the highly praised New York Times Magazine project, which was highly controversial at the time due to its conceit: that America wasn’t founded in 1776 with the signing of the Declaration of Independence, but in 1619 when the first African slaves were brought to the US and exploited.

A children’s book, presenting aspects of the novel’s contents in a way accessible for children, was also released. Titled, 1619 Project: Born on the Water, the book was written with help from Peabody award-winning author Renee Watson.

The 1619 Project: A New Origin Story by Nikole Hannah-Jones is available via Amazon.

The new book from Giles Chapman, 60 YEARS celebrates the legendary car from its revolutionary introduction, all the legendary Cooper and Works variants, to the development and popularity of new-generation Minis. From Alec Issigonis’ original concept to today’s models; the entire Mini history is covered in depth. Hardcover and with 200 photos including period advertising and more, it’s a big book on a small, yet landmark and ground-breaking automobile.