2020 was a year unlike any other, causing economic devastation for so many. COVID-19 took hold early in the year, leaving many millions of families in dire need. While Toys for Tots is primarily known as a Christmastime charity, we did not want to wait until the holiday season to provide support. Marines are known for being the first to fight and for running toward the sound of battle. During the spring and summer of the COVID-19 crisis, Toys for Tots partnered with Good360 to provide immediate relief and assistance by distributing 2 million toys, games, and books to COVID-impacted families. These gifts provided many benefits during this extraordinary time of need. They helped to fight boredom, relieved anxiety in children, and facilitated a return to normalcy. The gifts even contributed to the educational development of our Nation’s children, especially while they’ve been out of school.

As the pandemic continued to spread–causing states and municipalities to impose significant restrictions–the Marine Toys for Tots Foundation, in conjunction with Marine Forces Reserve, are looking ahead to the holiday season to making preparations for how best to collect and distribute toys to children in need.

COVID restrictions have greatly impacted our local campaign operations and significantly limited the number of volunteers permitted to help collect, sort, and distribute toys. In response, the Marines and local campaign coordinators of the Marine Toys for Tots Program rose to the occasion, and established over 800 local toy collection and distribution campaigns in all 50 states, as well as the District of Columbia, Puerto Rico, Guam, and the Virgin Islands. As anticipated, the demand from families with children seeking support was much greater than the supply. But the Marines, in their typical fashion, found ways to improvise and adapt. They were very innovative about how they collected and distributed toys. They established curbside and drive-through collection and distribution methods, and enlisted support from other local social service agencies in order to accomplish the mission.

Seeing a deficit of over a million toys develop in November, the Marine Toys for Tots Foundation sent out many communications soliciting for help. The American public heard our appeal and recognized the need for aid. Hundreds of thousands of individuals, as well as a record number of organizations serving as National Corporate Sponsors, answered our call. Significant donations allowed for the Marine Toys for Tots Foundation to augment local toy drives with over 8 million toys, valued at over $77 million.

Toys for Tots does not set a goal of children supported in a given year–rather, our goal is to support every family with children seeking our assistance. The American public has never let Toys for Tots down. With the help from so many, Toys for Tots was able to accomplish our mission distributing a record number of over 20 million toys to 7.4 million children, who otherwise would have gone without. “Unprecedented” seems to be the buzz word for most 2020 events, and there’s no better way to describe the generosity of the American public and our Corporate Sponsors – it was truly unprecedented.

About Marine Toys for Tots

Toys for Tots, a 73-year national charitable program run by the U.S. Marine Corps Reserve, provides happiness and hope to less fortunate children.  The toys, books, and other gifts collected and distributed by the Marines offer these children recognition, confidence, and a positive memory for a lifetime. It is such experiences that help children become responsible citizens and caring members of their community. Last year, the Marine Toys for Tots Program fulfilled the holiday hopes and dreams of over 7 million less fortunate children in over 800 communities nationwide.  Since 1947, over 272 million children have been assisted. The Marine Toys for Tots Foundation is a non-for-profit organization authorized by the U.S. Marine Corps and the Department of Defense to provide fundraising and other necessary support for the annual Marine Corps Reserve Toys for Tots Program.  For more information, visit www.toysfortots.org.

As previously communicated to the company’s employees from Fiat Chrysler Automobiles (FCA) CEO Mike Manley, the company is in the process of converting its first plant to produce face masks for donation to first responders and health care workers. The first machinery has been delivered and installed with supply and donation coming on stream in the coming weeks.

FCA is expanding its program of measures to support coronavirus relief efforts, focused on two principal areas: charities providing food services to children and support for a range of technical, logistical and manufacturing programs, such as face mask production.

“There has never been a more important moment to help children and their families with vital needs in our communities than during this time of great uncertainty,” said FCA CEO Mike Manley.

Food programs for children in our communities
FCA will work in partnership with non-profit organizations and foundations that are providing food to children until schools return to session. Starting immediately, FCA will help provide more than 1 million meals to school-age children in the communities around our principal manufacturing plants in Illinois, Indiana, Michigan and Ohio. The program will then be extended nationwide in the U.S. and to Canada and Mexico, supporting similar relief efforts for kids who would normally access school meal services.

Mobilizing company resources
Following the first actions taken to start face mask production, the company is now investing technical, logistical and manufacturing resources at medical equipment and personal protective equipment (PPE). With the donation of face masks produced by the company starting in the coming weeks, the company will invest to extend that production capacity to other plants and ultimately donate masks to first responders and health care workers across the world. Drawing on experience from the company’s engineering and logistics team in Italy who are assisting a local ventilator manufacturer, FCA is engaged with other companies producing ventilators and other much needed medical equipment and PPE.

“In this time of need, we’ve focused our resources on those actions we can implement quickly and that will have the greatest impact, as we did in Italy as soon as the emergency started,” added Manley.

FCA
Fiat Chrysler Automobiles (FCA) is a global automaker that designs, engineers, manufactures and sells vehicles in a portfolio of exciting brands, including Abarth, Alfa Romeo, Chrysler, Dodge, Fiat, Fiat Professional, Jeep®, Lancia, Ram and Maserati. It also sells parts and services under the Mopar name and operates in the components and production systems sectors under the Comau and Teksid brands. FCA employs nearly 200,000 people around the globe. For more details regarding FCA (NYSE: FCAU/ MTA: FCA), please visit www.fcagroup.com.

Native Shoes is excited to announce it’s joining forces with Zappos for Good, the community outreach arm of Zappos.com, the customer service company that just happens to sell shoes, clothing and more, to collect well-loved Native Shoes to be recycled and made into playground matting. The initiative, called The Remix Project, is one of Native Shoes’ programs that aims to have each and every pair of their shoes 100 percent life cycle managed by 2023. Consumers can help build playgrounds by visiting Zappos for Good, requesting a free shipping label, and sending all styles of well-loved Native Shoes to be recycled. The project’s goal is to receive 10,000 recycled shoes by December 31, 2018 and build its first playground in 2019.

“Our customers are always showing us how to keep it lite and have fun when they wear Native Shoes. It seemed like a perfect fit to turn them into something useful, on a playground where communities gather to have fun and play,” said Kyle Housman, President, Native Shoes. “We’re excited to be working with Zappos for Good on this project, what a great opportunity to team up and bring fun to communities.”

“As an advocate for environmental sustainability, joining forces with Native Shoes is an amazing opportunity to help communities do more with less by encouraging an environmental best practice in the retail industry that simultaneously creates a fun space for kids¬–and their imaginations–to run wild,” said Steven Bautista, Head of Zappos for Good at Zappos. “With our overarching goal of delivering happiness, this project’s sustainability efforts allow us to spread smiles on both a national and local level.”

How to Participate in The Remix Project

For more information or to learn more about The Remix Project, please visit nativeshoes.com 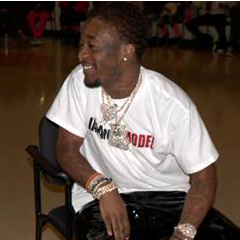 “It is very important to me that I let our youth know that it is okay to be unique and to not let society put you in a box.” – Lil Uzi Vert

About 300 students at the Thomas Murphy Clubhouse in Brooklyn, NY were in the gymnasium indulging in after school activities when Generation Now/Atlantic recording artist Lil Uzi Vert, came through the gymnasium’s back door to spend quality time with the eager students.

Lil Uzi Vert who was wearing OFF WHITE X NIKE: Air Jordan 1, black skinny jeans and his signature diamond chains walked in to receive his honorary “Flatbush Suns” basketball jersey. Over the past several months Uzi has been visiting the Thomas Murphy Clubhouse to help with everything from homework to coaching basketball games. To show his appreciation to the students, Uzi surprised several students with tickets to Power 105.1’s annual Power House concert at the Barclays Center where he was a performing along with other hip-hop artists such as Migos, Cardi B, and French Montana.

October 28th turned out to be an incredible day for the students of the “Role Models” Youth Empowerment program in Philadelphia, Pennsylvania where Uzi Vert made his second community outreach appearance of the week. 75 students greeted the rapper with loud screams and tears as he walked in to the community center dancing to Playboi Carti’s latest hit single, “Wokeuplikethis”. Uzi spent most of the day with the students listening to their dreams, fears, and watching them showcase their creative talents. “It’s so refreshing to see a rapper that the students look up to take the time out of their busy schedule to promote positive thinking and creativity.”, says Role Models Youth Empowerment Founder, Oddessa Blocker.

Lil Uzi Vert is scheduled to do several community outreach events over the next few weeks in the Tri- State Area. One being a turkey drive during the Thanksgiving Holiday in his hometown of Philadelphia, Pennsylvania where the rapper will give out 500 turkeys to family in need.

An energetic and volatile live artist, Lil Uzi Vert has spent much of 2017 knocking out fans at top festivals such as Coachella, Lollapalooza, and Rolling Loud. Uzi’s electrifying stage presence and distinctive style prompted the fashion and entertainment industry to commend his “self-confidence and non-conformity”. He is stepping away from the traditional idea of what a rapper is supposed to dress and act like, perhaps more than we’ve ever seen before.

Having left an indelible, chart-topping mark on hip-hop and pop in 2017, this gifted artist is certain to take things even further in the future. Unpredictable, experimental, and utterly original, Lil Uzi Vert is indeed unstoppable.