In this monumental mural, the artist depicts four Black women in profile, facing each other in a mirrored disposition through a central altarpiece. The scene is completed with snake plants, hummingbirds, and serpents, all popular elements in Afro-Brazilian syncretic religions. This suggestive iconography serves as an expression of spiritual healing: snake plants, for instance, are popular plants in Brazil (commonly referred to as “St. George’s Spade”), believed to be instilled with protective powers against evil, and used in ceremonial blessings.

Acclaimed muralist, Criola, has significant mural paintings in São Paulo, Rio de Janeiro, Belo Horizonte, Paris, and now right here in the Miami Design District. The artist’s display in Jungle Plaza will be her most giant mural outside of Brazil, and her second public work in the US, following “Black Girl Magic” in Las Vegas last year. Her mural, Interdimensional Portal, portrays Afro-Brazilian ancestors in ritualistic performance, accessing ancient forest wisdom for medicinal purposes, and transcending thresholds of knowledge.

Fiber artist Ferne Jacobs’ lifetime art collection spanning from the mid-1960s to 2022 will be on display exclusively at the Craft in America Center.

The Los Angeles artist has been innovating in the art world for over fifty years. The exhibition will showcase around 30 pieces of work created by Jacobs across the timeline of her career. Though Jacobs has lived in Los Angeles for many years, her art has never been on display in such a way. The experience will take visitors through the evolution of her career as an artist and highlight her unique tactics and techniques.

Jacobs serves as a pioneer in the development of fiber as an artistic form. She is renowned for the methods she uses to manipulate the rare material. While embracing traditional techniques of knotting, coiling and twinning, Jacobs has continued to elevate these practices into something revolutionary. Though she may work in fiber, Jacob’s artwork are sculptured pieces of art.

The display of Jacobs’ artwork allows the public to admire and be inspired by her artistic approach. All of Jacobs’ work signifies a personal artistic journey constructed and apparent in her artforms. With years of dedication, Jacobs has perfected and transformed her unique craft.

While the exhibition is an in-person experience, Craft in America is creating a virtual exhibition for those who cannot be in attendance. The virtual exhibition is complemented by an assortment of public programs such as an artist talk, demonstration, and hands-on workshop. Students from the Craft in Schools program, which works to encourage underprivileged K-12 Los Angeles schools, will be attend the exhibit. They will have the chance to learn about Jacobs’ creations, which serves as an opportunity for the students to explore the artistic method of fiber.

After moving to Los Angeles at a very young age, Ferne Jacobs dedicated her life to her craft. After taking a weaving workshop with the artist Arline Fisch in the mid-1960s, Jacobs discovered her passion. After obtaining her M.F.A. from Claremont Graduate University in 1976, Jacobs has been showcased in several solo and group exhibitions throughout the United States and internationally. Accumulating varying awards for her groundbreaking art, Jacobs artwork is also featured in public collections such as the Smithsonian National Museum of American Art (Washington D.C.), the Metropolitan Museum of Art (New York City) and the Museum of Arts and Design (New York City). 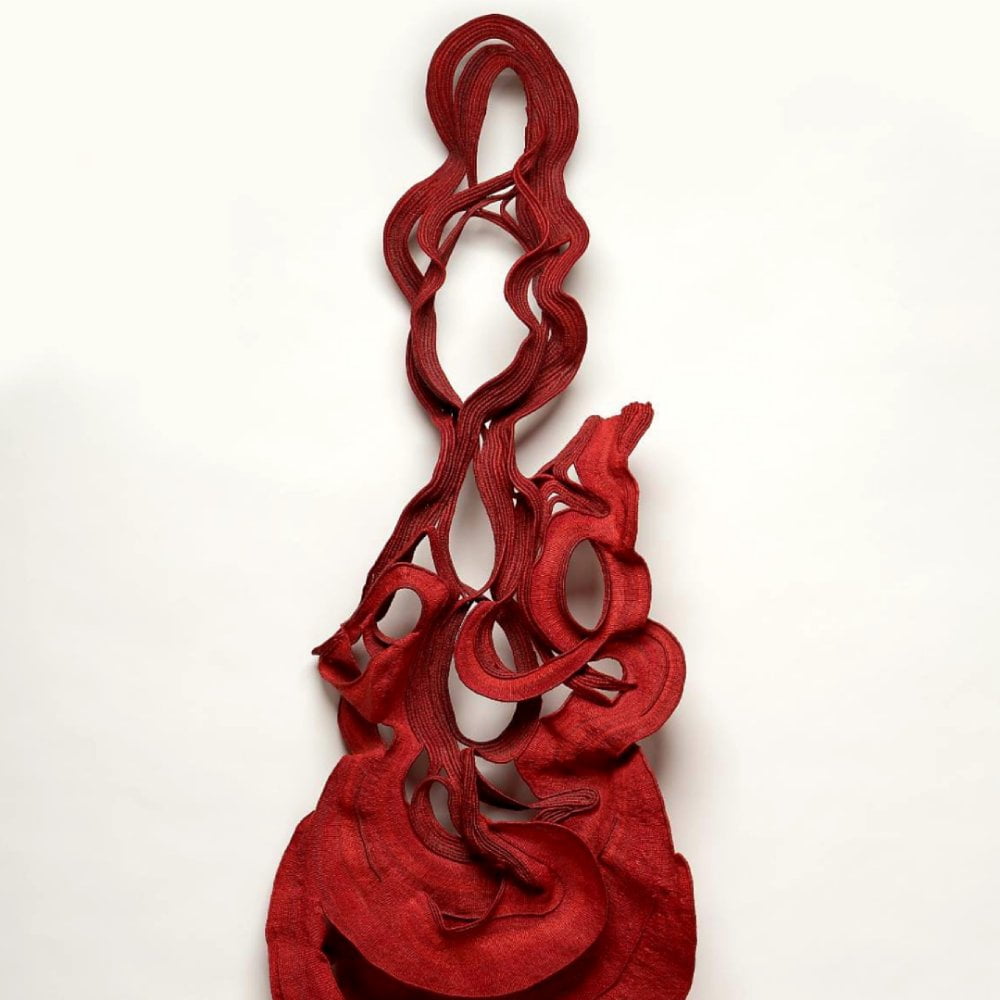 An Open Letter to Dr. Ari Kelman, Interim Dean of the College of Letters and Science at The University of California, Davis.

My name is LG Williams, and I am writing regarding the recent exhibition, Wayne Thiebaud Influencer: A New Generation, currently on view at the Manetti Shrem Museum of Art at the University of California, Davis. The show is curated by Rachel Teagle and Susie Kantor.

I received my MFA from UC Davis and taught in the Art Studio department as a lecturer in the late 90s. I could be wrong, but I suspect you may be unaware of this particular exhibition. That said, I thought it essential to take this opportunity as an alumnus, former lecturer, and artist to write to you with my observations. Perhaps they might persuade you to regard this public art exhibition with disdain and dread…

Dont Fret, one of Chicago’s most recognizable street artists, today unveiled a new, large-scale art installation on the Chicago Riverwalk. Titled The People in Your Neighborhood, the installation is located at the Riverwalk’s most western point, known as The Confluence between E Lake St and N Franklin St, and features 55 portraits of Chicagoans, all portrayed in Dont Fret’s inimitable sardonic style. The unveiling is accompanied by the release of his new book, Dont Fret: Life Thus Far, now available for purchase.

Offering a microcosmic reflection of Chicago’s scrappy and hard-working residents, the portrait subjects of The People in Your Neighborhood range from the well-known to the obscure. Designer and restaurateur Kevin Heisner stands alongside Claudio, Chicago’s beloved tamale vendor, who in turn rubs elbows with Maria, longtime owner of Maria’s Bridgeport and Howard Brown Health doctor Abby Baus. Each is depicted with both comedic and piercing insight, caricatures that are reminiscent of the archetypical Chicagoans who have lived in the city for generations. The portraits and subject bios can also be seen on Dont Fret’s Instagram page.

“There are certain character traits that I think define a true Chicagoan. Tough, full-browed with a sense of ingenuity and midwestern humbleness, but always toiling, working, moving forward with an almost absurd laugh and grin about this crazy, wonderful city,” said Dont Fret. “I was asked to paint 55 portraits of Chicagoans who I think contribute to the hard work that defines our city, although it can only scratch the surface of the millions of stories moving through our streets. These are the people in your neighborhood.”

“Dont Fret’s proposal for celebrating everyday Chicagoans who make our City go – from the beloved Tamale Man to artists to bridge engineers – was really appealing to enliven a long stretch of the Riverwalk that otherwise fades into the background,” said Lydia Ross, Director of Public Art at the Department of Cultural Affairs and Special Events. “The artist’s distinctive style isn’t intended to capture an accurate portrait, but rather the heartfelt spirit of the great people that surround us, some of whom we know, some we recognize, others we may be more attuned to looking out for…it was conceived pre-COVID but felt even more resonant to celebrate people in the midst of social distancing.”

Dont Fret’s unpolished aesthetics paired with pithy one-liners are recognizable features of Chicago’s built environment, in addition to being painted and wheat-pasted on buildings around the world, from New York to Berlin, Miami, São Paulo, London and Helsinki. Don’t Fret: Life Thus Far, the first comprehensive survey of the artist’s work, showcases a decade of his street and gallery work and features memories and anecdotes from fellow artists and friends including Louder Than A Bomb founder Kevin Coval, artist Cody Hudson and rapper Vic Mensa.

In the 256-page monograph, the figures and texts of consummate wise guy Dont Fret skewer the obvious and reflect the normalized-until-numbed issues of the city back at the passerby experiencing them firsthand. While his work populates city streets worldwide, he remains a true Wicker Park native, digging into the character(s) of Chicago—the stew of down-and-out and up-and-up, the meatpackers, the artists, the street-wise, and the stupid. Featuring 216 color images, this monograph also includes a foreword by writer and Brooklyn Street Art co-founder Steven P. Harrington.

In addition to The People in Your Neighborhood, the Chicago Riverwalk also recently unveiled a mural by Chicago-based artist Kate Lynn Lewis,The Radiance of Being, which celebrates 100 years of Art Deco. Lewis is also one of the 55 Chicagoans portrayed in Dont Fret’s installation.The Chicago Riverwalk has been going through a phased reopening which included the Community Marketplace opening July 17. Vendors are open by reservation for contact tracing purposes, walk-ups are welcome and will be asked for contact information. Vendor details are available at www.chicagoriverwalk.us.

Dont Fret is an artist born, raised, and currently working in Chicago. In addition to his wheat pasting, his practice includes drawing, painting, sculpture, performance, and installation-based work both on the street and in the gallery. He has produced large-scale public murals in a number of American cities, including Chicago, New York City, Miami, San Francisco, Grand Rapids, and Denver, as well as internationally in such cities as São Paulo, London, and Helsinki. His work has been in a number of galleries nationally and internationally, with shows in Chicago, New York, San Francisco, and London. Dont Fret’s work was also featured prominently in the Netflix original series Easy.

Faena Art presents Faena Festival: This Is Not America.

The First Faena Festival explores the mythologies and narratives of ‘America’ and commissions new installations and performances that reflect the multiplicity of cultures, voices, and people across its physical, conceptual, and political borders.

Faena Festival, This Is Not America, is keyed to Miami’s enduring role as a port that welcomes migrants, refugees, and tourists from across the US and the Americas, and from countries throughout the world. The festival engages with the multiplicity of communities and cultures and the palimpsest of histories that have created the Americas while responding specifically to Miami as its hemispheric hub. All programming is free and open to the public.

This Is Not America is anchored by Alfredor Jaar’s groundbreaking work, A Logo for America, and proposes a new curatorial format for presentation that occupies and engages the entire Faena District and extends beyond into public spaces of the city of Miami Beach as an experiential platform. The diverse venues of the Faena District Miami Beach will be activated, including the public areas of the street, sidewalk, and beach; the Faena Hotel, including its theater and screening room; and Faena Forum – the OMA-designed cultural centerpiece of Faena District Miami Beach.

“From the beginning my vision for Faena has been to create a cultural epicenter that draws artists and audiences from throughout the Americas and around the world,” stated Alan Faena, Founder and President of the Faena Group. “The annual Faena Festival will provide a new platform to explore ideas in contemporary culture that fosters engagement with the issues that define us individually and collectively. We are interested in site-specificity and universal impact – in creating a cultural movement without borders, we want to speak to the world. Artists are not limited by geopolitical divides, and ultimately, by celebrating these diverse artists and visions we find ways in which we are all connected.”

“This Is Not America addresses America as concept more than a piece, a contested and powerful idea that is greater than the waters and borders that frame it,” noted Zoe Lukov, curator of Faena Art. “Artists in the Festival have been invited to explore the concept of America as a myth and a narrative that has at times bound and divided us but ultimately has the power to unify. By occupying the interstitial zone between land and sea many of these site-specific installations seek to reimagine porous and transitional spaces as places of refuge and safe harbor that are representative of what our ‘America’ is and can become.”