Today, multi-platinum producer DJ Snake unveils his latest release with new track “You Are My High”. On this record, the boundary-pushing disruptor fuses elements of traditional dance music with classic R&B funk to create a woozy electronic soundscape sure to be heard across the world this summer. You can listen to “You Are My High” HERE.

The song, which samples the classic track “You Are My High” from The Gap Band, follows last week’s release of DJ Snake’s high-energy club anthem “Ring The Alarm” with Malaa. The two tracks arrive on the heels of DJ Snake’s announcement that he will be embarking on tour across Europe and North America, including dates with Malaa, starting on July 29th in Chicago, IL. The upcoming 2021 run includes a stop at North America’s legendary electronic music festival EDC Las Vegas in October. See full list of dates below. Tickets will be available on July 29th HERE.

DJ Snake made his full-length debut with Encore, a 2016 album that reached #1 on Billboard’s Top Dance/Electronic Albums chart and debuted in the top ten around the world. Since scoring his first #1 with the four-times-platinum “Let Me Love You” ft. Justin Bieber, DJ Snake has triumphed with such colossal hits as “You Know You Like It” (with AlunaGeorge), “Lean On” (with Major Lazer, featuring MØ) and “Taki Taki” ft. Selena Gomez, Ozuna & Cardi B. With its title translating to “the freedom to do whatever one chooses,” his sophomore album Carte Blanche arrived in July 2019 and shot to #1 on Billboard’s US Top Dance/Electronic Albums chart, in addition to reaching the top 50 on the Billboard 200. Thanks to the tremendous success of “Let Me Love You,” “Lean On,” and “Taki Taki,” DJ Snake now holds the distinction of being one of only two dance artists in the world to have three songs amass more than a billion streams on Spotify.

9x Grammy Nominated Producer and Rapper Kosine welcomes producer and songwriter Young Fyre for an unfiltered conversation today on “The Truth Serum Podcast” with Kosine & Friends – a limited series that will feature some of Kosines ‘Super Friends’ where each episode explores the ups and downs of the music industry through personal experiences as Kosine’s super friends pull-up and share the untold stories that shaped their careers. Truth Serum’s unique blend of transparency and storytelling makes it the most dangerously honest podcast on the net. Tune in now for the debut episode and stay ready for the latest episodes to come!

WATCH THE FIRST EPISODE HERE TO SEE NINE OF THE MOST MEMORABLE SOLO FEMALE ARTISTS,
AND GROUPS FROM THE 1990S AND 2000’S MAKE A COMEBACK

Kosine stars in BET’s newest reality show “The Encore” where nine of the most memorable solo female artists and groups from the 1990s and 2000s are making a comeback. In an attempt to reinvent themselves and get back into the spotlight, the artists are tasked with forming an R&B supergroup.

The nine cast members are Shamari DeVoe of Blaque, Irish Grinstead and LeMisha Grinstead from 702, Nivea Nash and Felisha King of Cherish, Fallon King and Pamela Long from the group Total, Aubrey O’Day from Danity Kane, and Kiely Williams of 3LW. While living together, they must create a collaborative album in 30 days and perform the music live with the help of song writer Elijah Blake and Music Producer Kosine.

Episode 2 went live on June 16 at 10pm EST where all of the women take a vote on who will be “Queen” of the house, and Kosine works closely with all nine stars to make their first song as a group in episode 2. Despite the differences in opinions and artistic capabilities, Kosine works with all nine artists as they strive towards forming the ultimate Girl RnB group.

Tune in Next Wednesday June 23 to see Episode 3 as Executive Producer Kosine and Song Writer Elijah Blake work with all nine women to create new music and prepare for their live performance set to happen at the end of the series!

Kosine will be the executive music producer for the show, working closely with all nine cast members to make their artistic visions come to life, and ultimately help these talented women reinvent themselves collectively to take back the spotlight. Tune in next Wednesdays on BET at 10pm EST to see Episode 3!

WHO: 9x Grammy Nominated Producer and Rapper Kosine for BET’s “The Encore” starring Shamari DeVoe of Blaque, Irish Grinstead and LeMisha Grinstead from 702, Nivea Nash and Felisha King of Cherish, Fallon King and Pamela Long from the group Total, Aubrey O’Day from Danity Kane, and Kiely Williams of 3LW

WHAT: BET’s newest reality show “The Encore” where Nine of the most memorable solo female artists and groups from the 1990s and 2000s are making a comeback.

WHEN: Wednesday’s at 10pm EST on BET Live and BET Her, watch episode 1 here,
Tune in Next Wednesday June 23rd for Episode 3!

WHERE: You can tune in live on Wednesdays at 10pm EST on the BET channel, and watch past episodes on BET’s website, click here to see episode 1

About KOSINE
Kosine is a nine-time GRAMMY® Award-nominated producer, songwriter, instrumentalist, and actor. His discography notably spans multi-platinum and chart-dominating smashes for everyone from Justin Bieber, Rihanna to Nicki Minaj, NAS, and Big Sean. After taking the time to reintroduce himself and reestablish old relationships through intimate and open conversations, he has truly proven he is here to stay in the industry, and will continue to thrive despite the odds that were once against him.

On Saturday night, a five-piece-indie-rock band, Local Natives brought the energy to the Palladium with their symphonic tones, unique instrumentals, and airy soft lyrics. The LA native band played multiple songs throughout the night from their new album Violet Streets. This album explores adulthood, love, and friendships.

The band opened the show with a piece called “Vogue” from their album Violet Streets. The band then quickly livened up the audience by singing one of their older songs, “Sun Hands” in which lead singer, Taylor Rice jumped into the sea of screaming fans to crowd surf.

The fans continued screaming throughout the show, especially once the band played the song, “Fountains of Youth”, which was a song released in November of 2016, right before the elections took place.

The group finished their set with the song “When Am I Gonna Lose You”, which lead singer, Rice, explained was an ode to love. As the LA native boy band announced their last song, the crowd was in tears. The phrase “encore” could be heard from miles away. The band came back on to perform a few more songs until they had to say their last goodbye. 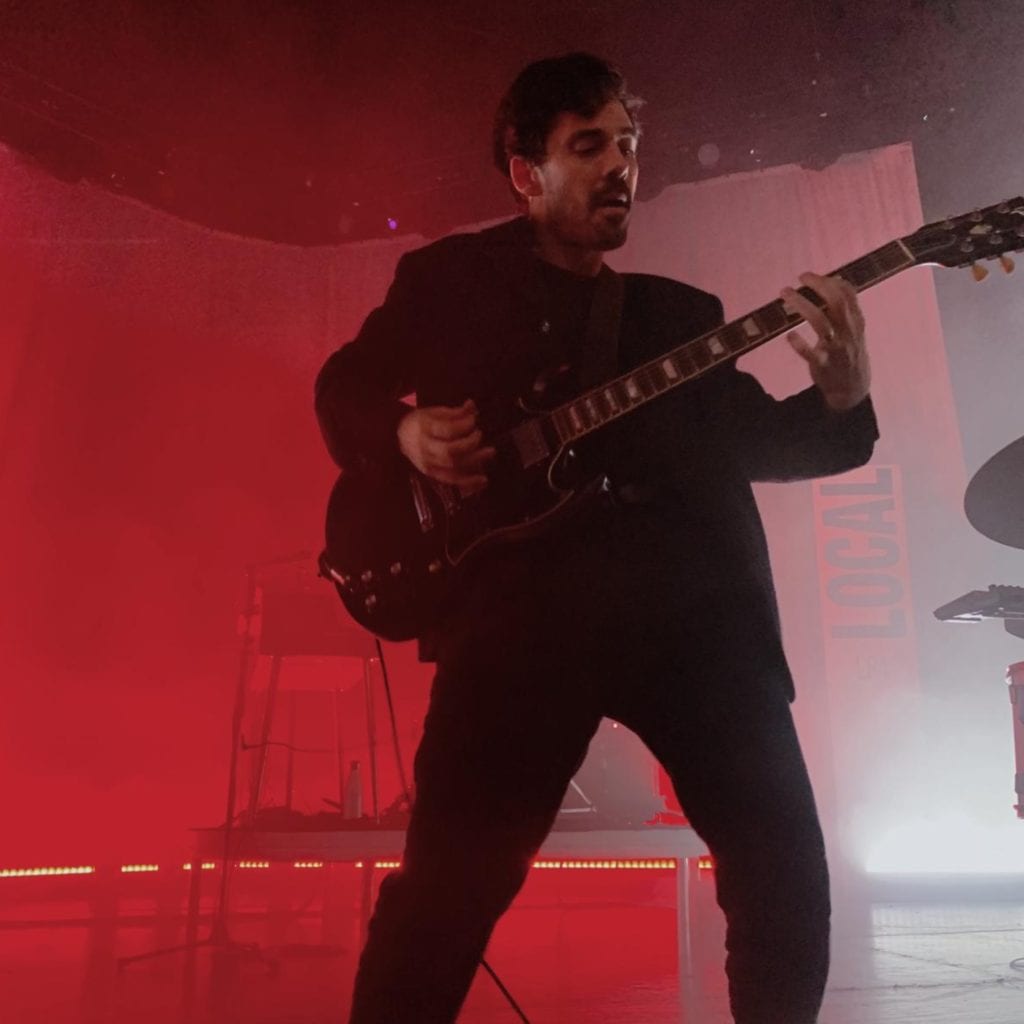