Multi-platinum, Grammy Award-winning music icon Lil Wayne drops the fast-paced music video for his latest single “NFL.” The video features Gudda Gudda & HoodyBaby and was released via Young Money Records/Republic Records. Scenes from the “NFL” music video are also featured in Amazon Prime Video’s new live sports promo.
Lil Wayne has also curated his own playlist for Amazon Music titled “Handpicked with Lil Wayne: Songs for Game Day,” featuring 28 songs including a mix of his own music as well as music from Roddy Ricch, 2 Chainz, Lil Baby, and others. To listen to “Handpicked with Lil Wayne” on Amazon Music, ask you Alexa, “Alexa, play Handpicked with Lil Wayne.” You can also head over to Amazon Music. Be sure to follow Prime Video’s @SportsOnPrime Twitter and Instagram feed for additional exclusive Lil Wayne content.
The “NFL” music video follows the release of the highly anticipated Tha Carter V Deluxe Edition. The 33-song album includes new contributions from Raekwon, 2 Chainz, Gucci Mane and Post Malone. Wayne has been on a hot-streak in 2020 – releasing his fifth No. 1 album Funeral, as well as releasing fan-favorite projects on digital streaming platforms, including Free Weezy Album (FWA) and No Ceilings mixtape.
Wayne also showcased his undeniable talent as a host with the launch of the highly successful- Young Money Radio – on Apple Music, which featured an all-star lineup of guests including Dr. Dre, Drake, Eminem, Nicki Minaj, Twitter CEO Jack Dorsey, Dr. Anthony Fauci, Kevin Hart and many more.
Lil Wayne rewrote the entire game in his image. The five-time GRAMMY® Award-winning multiplatinum rap icon, Young Money Entertainment founder, acclaimed author, skater, philanthropist, and history-making superstar left an indelible tattoo on the culture.
By 2020, he cemented his legacy forever as “one of the best-selling artists of all time,” tallying sales in excess of 100 million records worldwide with 15 million albums and 37 million digital tracks sold in the United States alone. Not to mention, he garnered 11 BET Awards, four Billboard Music Awards, two MTV VMAs, and eight NCAAP Image Awards. Among many milestones, he emerged as “the first male artist to surpass Elvis Presley with the most entries on the BillboardHot 100,” logging a staggering 109 entries.
With a discography highlighted by two consecutive #1 debuts on the Billboard Top 200 with 2008’s triple-platinum three-time GRAMMY® Award-winning opus Tha Carter III and its double-platinum 2011 successor Tha Carter IV, he completed the series with Tha Carter V in 2018. Not only did it clinch #1 on the Billboard Top 200, but it also achieved “the second-largest streaming week for an album in history.” Every song on the tracklisting charted on the Billboard Hot 100 as he became “the first artist to debut two songs in the top 5.”
This bulldozed the way for his thirteenth full-length album, Funeral, a year later. Simultaneously, Wayne owns and operates Young Money Entertainment as C.E.O. The company ignited the careers of two of the most successful artists ever—Drake and Nicki Minaj. The committed philanthropist founded The One Family Foundation too.

Rising hip-hop artist pineappleCITI returns with visuals to her single “Dance,” out today. Flipping the script on Dancing with The Stars, CITI’s latest video offers a clever play on the popular dance competition, adding a unique and comedic hip-hop flair. Featuring slick lyricism alongside an upbeat tempo, “Dance” blends melodic rhythms with Latin-influenced guitar and percussions, making an irresistible track that lives up to its name.

One of TIDAL’s Rising Hip-Hop cover artists this year and featured on NBA2K20, NBA2K21, and Netflix’s Sneakerheads, pineappleCITI is equal parts rapper, singer, and acclaimed songwriter. Named one of Okayplayer’s 25 Underrated Female Rappers, she has penned works for Twista and Kelly Rowland. In the same year, she celebrated the release of her viral hit “Rose Colored” and suffered a near-fatal car crash, causing her to learn how to walk again over the course of two years.

With a focus on songs that feature motivational lyricism and powerful messages, she has released a number of recent singles, including “Recognize,” “Believe,” and “Lift Me Up,” the latter of which was dedicated to the Black Lives Matter movement and victims of police brutality.

For pineappleCITI, rhymes and raps spring right from the heart as she approaches each song, project, album, and show with equal reverence for nineties East Coast storytelling and old-school Motown catharsis. Endorsed early on by The FADER, PAPER, Complex, and Billboard and streamed over 2 million times as of 2019, the New Jersey-born MC provides a simultaneously unique and universal perspective to her music.

Bursting out of the lo-fi hip-hop scene, Powfu has premiered the official video for his explosive track “death bed (coffee for your head)” featuring UK singer beabadobee today – watch HERE. The video, which was brought to life by director duo BEDROOM, playfully follows Powfu and his girlfriend in his hometown of Vancouver, Canada.

The track is a staple on TikTok with over 3M videos created to date. “death bed” made its Billboard Hot 100 debut last week, catapulting up the charts with major radio adds rolling in internationally. The song has over 250M combined audio/video streams to date worldwide. “death bed” is #6 on Spotify’s Global chart and #12 in the US, while sitting Top 10 in 15 countries. Watch Powfu breakdown the lyrics for the track on Genius’ Verified HERE.

The 21-year-old Canadian artist started recording in the basement of his parents’ home and started releasing music on Soundcloud while still in high school. He would steal his dad’s mic (Faber Drive) and ended up purchasing himself a laptop as recording quickly became his favorite hobby. After finalizing his image and sound, his numbers started rapidly increasing, gaining millions of streams over multiple platforms. He has collaborated with many artists on the rise such as Rxseboy, Guardin, and Snow. His genre can vary from chill-lo-fi to hype-punk, as he finds inspiration through older punk-rock bands as well as newer hip-hop artists such as G-Eazy and Madeintyo. 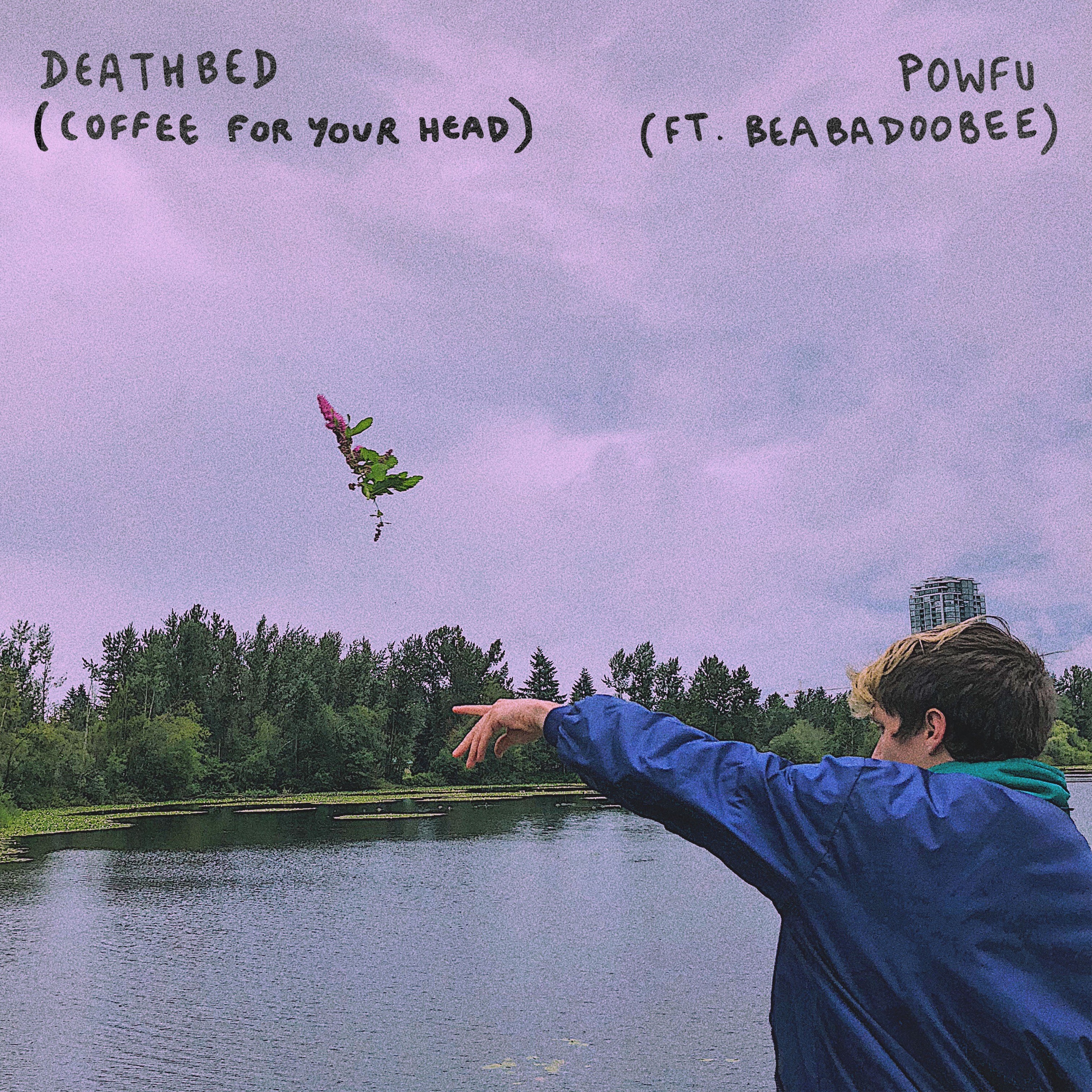