There is often a secret ingredient that draws us into powerful performances on our television, captivates us with storytelling in our favorite books and has us hooked on to the latest video game. That secret ingredient is a constructed language and there is a Denver startup focused on creating a platform for language creators around the world and promoting the art, science, and craft of inventing languages.

That company is Conlangio, an innovative language-construction software company with a free web-based constructed language application. This startup – not even a year old and still in its early phases – already has over 400 language creators and over 400 languages created using their software. It has created quite a buzz in this niche community and is planning to expand to content-creation and educational material in the near future.

“Language is my absolute passion. After getting my degree in Linguistics and becoming a software engineer, I really made it a mission to use this unique skill set to create language applications for underrepresented language communities. I started creating my own language in 2016 as a way to deal with some issues transitioning from military to university so this is where I wanted to start my journey,” says Patrick Gaston

One of the most amazing things about this startup is that it was created on nights and weekends as a side project – and still is!

“I’m kind of just riding this wave right now. Conlangio has definitely grown to a point that makes it hard to do part-time but I am loving every minute of it. This whole journey has already been so surreal and if I get to work on Conlangio full-time, it will be amazing,” says Gaston.

In the past year, Conlangio has grown to a diverse team of 4, including 2 military veterans.

Want to know more? So do we!

What is a constructed language?
Constructed languages, or conlangs for short, are languages that have been created artificially, by an individual or a group, with the intent of being used for communication by a group of speakers, to enhance art, entertainment and more.

You may be more familiar than you think! If you’re one of the millions that tuned into HBO’s hit series Game of Thrones, you’ve heard of Dothraki, which is a fictional language constructed by David J. Peterson – an American language creator. That’s not all. Some other places you can find constructed languages are James Cameron’s Avatar, The 100, and the Lord of the Rings to name a few. That list is only getting bigger.

Why create a language?

People create languages for all kinds of reasons, some of these might include own personal use, video games, films or TV shows.

Stay tuned…
Be sure to keep an eye on this startup, as they may be responsible for your next favorite hit series.

To contact Conlangio or find out more, check out http://conlang.io/

In his first-ever solo exhibition at a German gallery, this Cameroonian artist undertakes a critical examination of the today’s political climate around the world, as well as the psychological implications of the human condition. The exhibition will include historical key works dating back to 1999, as well as brand new works.

Addressing social and environmental issues, his works are fueled by his personal experiences as an African in Europe. His studies of urgent challenges such as discrimination, alienation, and cross-border relations transcend cultural distinctions. Besides installations encompassing photography, performance, and video art, he integrates enigmatic watercolors into his output that figure as poetic vessels of hope amid the social and political critique his oeuvre articulates. Like his other works, they are based on a probing engagement with cultural realities. Fraught will allegorical significance derived from indigenous myths and rituals, they inquire into the foundations of human existence and dare to envision the body’s inward psyche.

The large-format drawings on paper, many of them mounted on canvas backing, unfold fantasies of a human and vegetative metamorphosis and create a living symbiosis between man and nature. The translucent watercolors convey an expression of vigor as well as fragility, its form spreading graphically across the white and strangely cathartic paper. Proliferating entrails, as vital as they are brutal, grow out of the human body and explode physical as well as mental boundaries. Man’s existence appears grotesque and sublime at once as he is both deformed and enhanced. 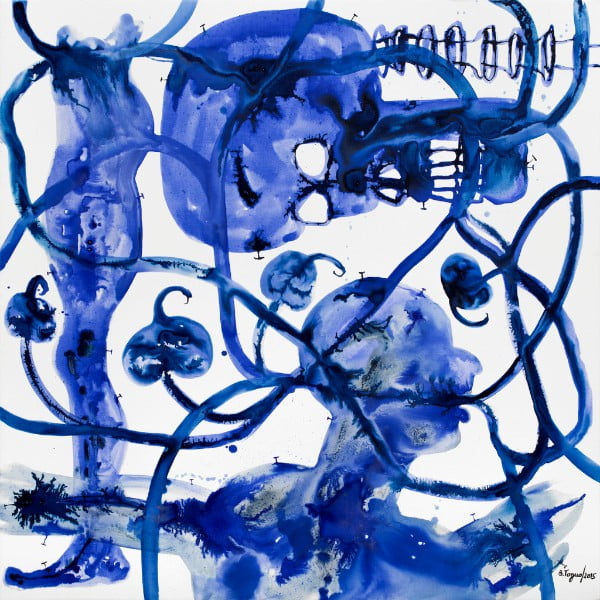 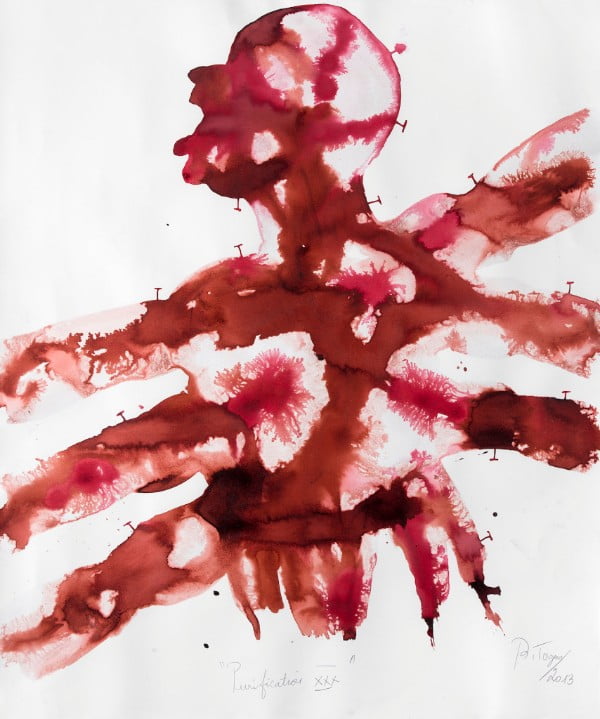 Barthélémy Toguo was born in 1967 in Cameroon and lives between Paris and Bandjoun. He trained at the École Nationale Supérieure des Beaux-Arts in Abidjan, Ivory Coast; the École Supérieure d’Art in Grenoble, France; and the Kunstakademie, Düsseldorf, Germany. He founded Bandjoun Station, a centre for artistic exchange between local and international artists featuring residencies, an exhibition space, a library and plantations in Bandjoun, Cameroon, in 2007.

In 2011, Toguo was made a Knight of the Order of Arts and Literature in France. He was shortlisted for the Prix Marcel Duchamp in 2016. His work is in the collections of the Centre Georges Pompidou, Paris; Museum of Modern Art, New York; Studio Museum in Harlem, New York; Musée d’art contemporain, Lyon; Fondation Louis Vuitton; and Kunstsammlung der Stadt, Düsseldorf, among others.

The Economist, a leading source of analysis on international business and world affairs, today announced “Open Future”, an editorially driven initiative (www.economist.com/openfuture) which aims to remake the case for The Economist’s founding principles of classical British liberalism which are being challenged from all sides in the current political climate of populism and authoritarianism.

“Although the world has changed dramatically since James Wilson founded The Economist to fight against the Corn Laws, the liberalism we have championed since 1843 is as important and relevant as ever,” said Zanny Minton Beddoes, editor-in-chief, The Economist.  “Yet the core tenets of that liberalism—faith in free markets and open societies—face greater resistance today than they have for many years. From globalization to free speech, basic elements of the liberal credo are assailed from right and left.”

Content for Open Future will be developed and organised around five themes: Open Society (diversity, and individual rights versus group rights); Open Borders (migration); Open Markets (trade, markets, taxes and welfare reform); Open Ideas (free speech); and Open Progress (the impact and regulation of technology). In addition to content from The Economist editorial staff, the Open Future hub will feature commentary from outside contributors, including from those with dissenting points of view.

The initiative launches with a debate between Larry Summers and Evan Smith about no-platforming and free speech at universities. Mr Summers is the Charles W. Eliot University Professor and President Emeritus at Harvard University. He served as Secretary of the Treasury for President Clinton and as the Director of the National Economic Council for President Barack Obama. Evan Smith is a Research Fellow in history at Flinders University in Adelaide, Australia and is writing a book on the history of no-platforming.

A special report on the future of liberalism written by editor-in-chief Zanny Minton Beddoes will appear in the newspaper’s 175th anniversary edition dated September 15th. And on that Saturday, the newspaper will host the Open Future Festival, to be held simultaneously in Hong Kong, London and New York. There will also be an Open Future essay contest for young people; surveys and other data visualizations; podcasts; social-media programs and new video from Economist Films.