Tenacious Toys is thrilled to continue their support of independent creators and manufacturers with a pair of exclusive releases at the end of this week.

This first drop is “Best Day Ever,”  a large scale 10-inch-tall vinyl art toy designed and self-produced by artist Ezra Brown. Best Day Ever depicts Ezra’s character Happy the Clown as he’s walking down the street… about to step on a nail.

Best Day Ever is limited to just 100 pieces as a co-exclusive between Tenacious Toys and Ezra Brown. Packaged in a fun, retro style art box, Best Day Ever will debut on the Tenacious homepage on Thursday August 12th at noon EST for $160 each, which includes free US shipping and a free Tenacious Toys enamel pin.

About Best Day Ever

Brown came up with the Happy character right before the pandemic. At first he was just going to be an ordinary character… nothing special. But as time went on and we entered into a global pandemic, he took on a totally different role. Happy came to symbolize what we all wanted in a time of despair. People wanted to make sense of what was going on around them, and Brown felt that this character could have a much deeper meaning. So that’s how he evolved from just an ordinary character to a whole mood.

He’ll be in everyday situations that any of us could go through, but sometimes we just don’t know how to make sense of them. Happiness is our emotions translated into cartoon form. That’s how Brown came up with the idea for the vinyl toy. Happy is their first vinyl art toy and they felt really good about the whole thing so that’s why I decided to name it Best Day Ever. Yeah he’s happy-go-lucky, whistling, etc, but if you notice he’s about to step on a nail. So “Best Day Ever” is also Brown’s sarcastic play on words… like when you’re having a bad day and you say “Best day ever!”

Ezra Brown’s art is a mixture of pop surrealism and vintage-style lowbrow. He’s a painter, illustrator and dabbles in wood cuts as well. And he is now a toy designer and manufacturer!

Tenacious Toys has been buying, selling & producing art toys in vinyl, resin, PVC and plush since 2004. The primary mission of Tenacious is to lift up and empower new creators by offering them a retail platform to showcase, promote and sell their artwork in the 3D collectibles space. The Tenacious website is an ever-changing and vibrant selection of limited-edition collectibles that is unmatched anywhere else.

Tenacious Toys is pumped to announce their next exclusive toy drop: the Rap Kings GOONBOX Gold Edition 7-inch vinyl art toy designed by Chris B. Murray and produced with care by Clutter Studios.

This is the first vinyl art toy by Philly artist Chris B. Murray who is best known for his illustrations and prints.

Chris grew up studying hip hop culture, which has driven his design sensibility as well as his work as a professional artist. His ongoing Rap Kings illustrated series highlights the groups he grew up listening to as well as current day artists. It started as a poster series, extended into other merchandise, and then ultimately led him to create the series first vinyl toy, GOONBOX!

The concept for the GOONBOX character is an intentionally vague mashup born out of the hip hop era—a gritty street character that incorporates pieces of some of Chris’ favorite rappers, groups and various elements of hip hop culture. Many references can be found all over this figure: the camo pants, the bees, the pigeons, the backpack, the manhole cover, the flower.

The Tenacious exclusive Gold Edition GOONBOX ES are limited to just 50 pieces and priced at $149.99. They will drop on the Clutter page at noon EST on Tuesday, July 13th.

About Chris B. Murray

Chris B. Murray is a fine artist/commercial illustrator living and working out of Philadelphia, PA (originally from upstate NY). From an early age, Chris immersed himself in everything that dealt with pop culture. His most favorite being hip-hop and everything surrounding the culture including graffiti art, sneaker hoarding/streetwear fashion and most importantly, the attitude. Every aspect of it was so very inspiring to Chris. He even goes as far to say that hip hop and the culture revolving it played a major role in raising him through his formative years. Those very same influences are deeply rooted in the work he is still making today from the vast array of color usage and character treatment, the inventive narratives to the meticulous compositions and concepts. Chris has been disciplined in using a variety of media on various surfaces to create his imagery.

Tenacious Toys has been buying, selling & producing art toys in vinyl, resin, PVC and plush since 2004. The primary mission of Tenacious is to lift up and empower new creators by offering them a retail platform to showcase, promote and sell their artwork in the 3D collectibles space.

By Chris Gates x Sam Berman
David Weeks NYC has been a a transcending designer and star in the art world. Recently, he unveiled his latest creation: a 5-foot-tall of Kanye West, showcasing his 4 sides of emotions.
Mr. weeks is the youngest innovative style award recipient and the leader
of a new wave of art. With his new series “Modern day Mount Rushmore”, the artist seeks to bring awareness to cultural legends in the black community who’ve helped shift the culture and provide a path for wealth, success and advocacy. The first in his series is a massive statue of his favorite artist Kanye West. The name of statue is perfect for its four-faced appearance: N.S.E.West.
The statue is now on display at Sneakertopia – a pop-up exhibit and store at HHLA. Inside, you see the restricted sneaker display and will be surrounded by a widespread variety of pricey kicks and very big street art pieces. 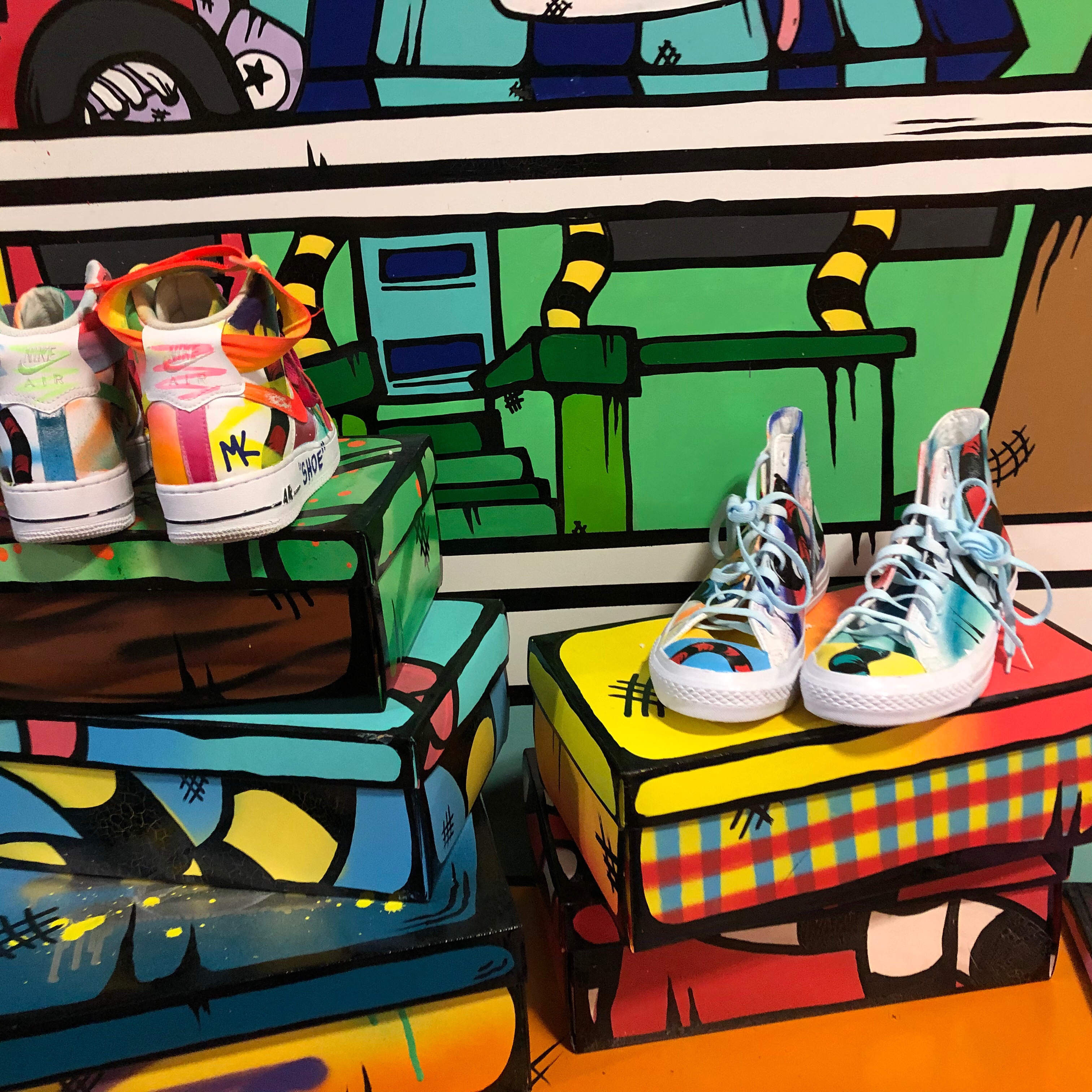 Average price to get a view is $20 a person, and you can grab your tickets here. The pop up shoe museum will be on full display with David Weeks NYC’s N.S.E.WEST masterpiece in Los Angeles thru Mar 1st, then will go on to hit other places around the globe.

2018 is a momentous year for South Africa with the Nelson Mandela Centenary marking what would have been 100 years since the iconic leader’s birth.

Officially July 18, 2018 – Mandela Day – marks this historic milestone as throughout the nation, and across the world, people celebrate South Africa’s first black President who was an inspirational anti-apartheid revolutionary and one of the greatest human rights advocates the world has ever seen. This year, South African Tourism invites US travelers to explore his legacy.

In Mandela’s honor, national celebrations will see a series of high-profile events and memorials. In New York, the One World Trade Center’s spire will be lit with the colors of the South African flag to honor the occasion.

On July 17, a day before Mandela Day, former US president Barack Obama will deliver the 16th Nelson Mandela Annual Lecture in Johannesburg. The theme will be “Renewing the Mandela Legacy and Promoting Active Citizenship in a Changing World,” and will honor the centennial of Mandela’s birth.

In other recent news, The Global Citizen Festival will expand from its regular location in New York City to Johannesburg for a special Mandela 100 edition this December, with Beyoncé, Jay-Z, Ed Sheeran and Chris Martin as headliners in honor of his legacy.

In Cape Town’s City Hall, a life-sized statue of Madiba will be unveiled on 24th July in the place where he had his first speech upon release from his imprisonment in Robben Island.

Internationally, the world’s largest musical tribute will also take place on Mandela Day through a series of charitable concerts held live across the world in support of improving literacy among poverty- stricken children. This important musical tribute is organized by Mandela Concerts with the goal of raising millions of dollars towards various projects including building 100 new library units in South Africa’s most vulnerable schools, developing a high school skills program, and providing 200 Toddler Trolley library programs for 5 to 6 year-old South African children by 2021.

Travelers interested to follow in Mandela’s footsteps can download Madiba’s Journey app. South African Tourism, in collaboration with the Nelson Mandela Foundation, recently re-launched the app to include 100 historic landmarks and sites that influenced Mandela’s life. From the Eastern Cape to Johannesburg to Cape Town and beyond, the app allows users to customize their own itineraries and helps guide them through key landmarks, offering context, photos and curated audio narration about Mandela’s life and the 27 years he spent as a political prisoner. A few notable landmarks are highlighted below:

● Robben Island: Tour the jail cell where Nelson Mandela spent 18 years of his life, through the eyes of those who experienced it first-hand. Many tours are led by ex-political prisoners.

● The Apartheid Museum in Johannesburg: Acknowledged as the pre-eminent museum in the world dealing with 20th century South Africa, the museum tells the apartheid story.

● KwaZulu-Natal: Visit this province to see the Nelson Mandela Capture Site. After being on the run for 16 months, Madiba was captured and arrested here in August 1962.

● Voting Line Sculpture in Port Elizabeth: A tribute to the thousands of South Africans who participated in the nation’s first democratic elections in 1994.

To book a Nelson Mandela inspired trip, speak to your travel agent or advisor. As a sample, South African Airways Vacation is currently offering a 10-day Mandela’s Journey to Freedom which gives visitors a first-hand, cultural experience following his footsteps as founding father of the New South Africa. Starts at US $2,999* per person. *Terms and conditions apply*