The Ronnie Wood Band return to the blues this month with the second instalment of his live album trilogy –‘Mr Luck – A Tribute to Jimmy Reed: Live at the Royal Albert Hall’. Released by BMG today, September 17, 2021, the 18-track album features The Ronnie Wood Band including Mick Taylor with incredible special guests, Bobby Womack, Mick Hucknall and Paul Weller and pays tribute to one of Ronnie’s musical heroes and major influences, the Mississippi electric blues pioneer Jimmy Reed.

The album is recorded live at a memorable night at the Royal Albert Hall on November 1st, 2013. It features stunning tracks including “Good Lover,” “Ghost of A Man,” and “Shame, Shame, Shame.” With unique album artwork specially created by Ronnie, Mr Luck will be available digitally, on CD, as a vinyl release, and as a beautiful limited-edition dual-tone smoky blue vinyl.

When self-taught guitarist Eddie Taylor imparted his skills onto his friend Jimmy Reed, he surely couldn’t have imagined the effect this was to have on the Chicago blues scene. Backing up such luminaries as John Lee Hooker, he is best remembered for his work with his former student.

Sweet coincidence, then, that in 1974 another Taylor, Mick, would make way for Ronnie Wood in the Rolling Stones, paving the way for these two friends and celebrated guitarists to work on projects ever since. The culmination of this to date is Taylor’s place in The Ronnie Wood Band at the Royal Albert Hall for 2013’s Bluesfest, where they played the now-legendary set that would come to birth to this recording.

Ronnie comments: “Jimmy Reed was one of the premier influences on the Rolling Stones and all the bands that love American blues from that era until the present day. It is my honor to have the opportunity to celebrate his life and legacy with this tribute.”

This album marks the second iteration in a trilogy of special and personal albums by Wood and the band, celebrating Ronnie’s musical heroes. The first album, Mad Lad explored the work of Chuck Berry as an emotional commemoration after Berry’s passing just over two years ago. Ronnie toured with Berry and was a lifelong fan.

Ronnie Wood is one of the foremost rock guitarists in the world, and a two-time inductee into the Rock and Roll Hall of Fame, with the Rolling Stones and the Faces. Ronnie has also pursued a remarkable parallel career as a highly regarded artist and, as a natural raconteur, has won a record three prestigious Sony Radio Personality awards.

OPENING ON SATURDAY, SEPTEMBER 25 IN THE HEART OF SOHO, LONDON

ANNOUNCE EXCLUSIVE THIRD MAN RELEASES FROM UK ARTISTS LIKE PAUL WELLER, DAVID RUFFIN, THE JESUS & MARY CHAIN, CORNERSHOP, GINA BIRCH OF THE RAINCOATS, AND THE MAGIC ROUNDABOUT IN CELEBRATION OF THE STORE OPENING

Jack White and Third Man Records have announced the opening of their Third Man Records London Store, their first location outside the USA. Situated on Marshall Street in the heart of London’s historic Soho—an area renowned for its rich musical history—the London store will complete a trio of Third Man physical spaces that includes buildings in Nashville, TN and Detroit, MI. The new location will feature a two-level retail space, an intimate live music venue named “The Blue Basement,” and a European headquarters for the label.

Located at 1 Marshall Street, London W1F 9BA, the store will officially open to the public on Saturday, September 25. It has been personally designed by Third Man founder Jack White, who recently launched Jack White Art & Design via a comprehensive multimedia website cataloguing two decades of his award-winning creative work, alongside the Third Man creative hive of artists. The store was conceptualized and created throughout 2020 and 2021 during the Covid-19 pandemic, with the aim of creating a physical space to help keep record sales and live performances alive after such a tough period for everyone.

Furthermore, in celebration of the opening, Third Man Records approached some of their favorite ever UK artists—Paul Weller, David Ruffin, The Jesus & Mary Chain, Cornershop, Gina Birch of The Raincoats and the great, lost Manchester group The Magic Roundabout—to record something brand new or contribute something previously unheard to the Third Man catalogue. These exclusive releases will be available to buy on black vinyl on September 25 from the Third Man Webstore (soon to be expanding to the UK/EU), at all three Third Man Records stores, and independent record shops everywhere, and on very limited edition yellow vinyl in the Third Man London store only.

Third Man Records London will be multi-functional, tripling up as a two-level retail space, an intimate live music venue named “The Blue Basement,” and a European headquarters for Third Man Records. It will feature a host of the kind of quirks, details and idiosyncrasies Third Man have become renowned around the world for.

These include a Third Man Records token-operated lucky dip book machine designed by the Toronto-based artist Craig Small. Titled the “Literarium,” it is only the second of its kind in the world and much loved by the likes of Margaret Atwood. The store will also feature a Third Man Records token-operated recording booth where artists and the public can record their own material straight to vinyl.

The official announcement follows much speculation and guesswork from eagle-eyed Third Man fans, who noticed the painting of eight fake, rotating store fronts at the 1 Marshall Street address. These fronts included Swank’s Muscle Tee Emporium, Jack Sharp’s Upholstery Tacks and Harry Lime’s Penicillin, all of which claimed to be under the umbrella of the fantastical Absurd Scam Family of Businesses. Last week, all UK subscribers to Third Man Records’ The Vault subscription service received a physical invitation for September 25 to the grand opening of one of these scam companies. 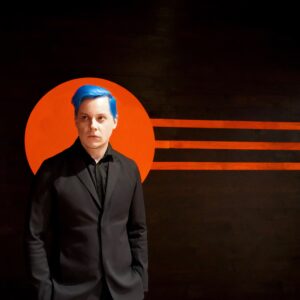 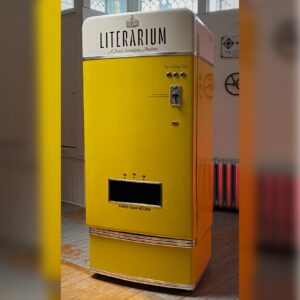 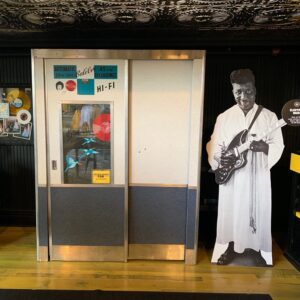 “I remember the first time hearing her voice…I instantly knew she was destined to be one of the greatest.” – NAS

“Jools loved Amy straight away – her honesty as a vocalist, songwriter, and Londoner…Britain has produced a lot of brilliant female singer-songwriters and vocalists in the last decade or so, many from Beth Gibbons to Adele, rooted in older black American forms, soul and jazz, and blues. But there was only ever one Amy Winehouse. She was frank and fresh and haunted. And we miss her.” – Mark Cooper BBC

Amy Winehouse At The BBC, a 3LP/3CD collection chronicling the many remarkable performances by arguably the greatest and most genuine talent to emerge in British music in decades, will be released on May 7, 2021, through Island/UMe. For the very first time, this updated release offers audio-only versions of the songs featured on ‘A Tribute to Amy Winehouse by Jools Holland’ and the ‘BBC One Sessions Live at Porchester Hall,’ and so a high proportion of these tracks will be completely new to digital music services. “Stronger Than Me,” “Tears Dry on Their Own” and “You Know I’m No Good” will be available on March 24 on streaming services, and the video for “Stronger Than Me” will be available on YouTube. This comprehensive collection captures the strong and enduring relationship that Amy enjoyed with the BBC and is further proof of quite what an extraordinarily talented, completely original, and truly engaging performer Amy was.

Disc 1 is a selection of recordings chosen by Later presenter, songwriter, and much-loved musician Jools Holland. Disc 2 is a 14-song audio selection dating from 2004 to 2009, while Disc 3 features the performances from Amy’s memorable Porchester Hall sessions. Like Amy’s three previous albums, this collection will prove, once more, a fitting tribute to her peerless artistry, phenomenal talent, and extraordinary powers as a songwriter, a singer, and an interpreter of classics.

Amy Winehouse At the BBC is available to preorder now:

DISC/LP ONE – A Tribute to Amy Winehouse by Jools Holland