The Fiat has a voluminous history of performance and style dating back over 50 years. This Italian gem was first introduced to North America in March 2011 and featured the Fiat 500c, 500 Abarth, 500e, 500L and the 500x. And for 2018-2019 they are reintroducing the Fiat 124 Spider for the current generation, featuring modern styling, engineering science and enhanced performance with traces of the original Italian roadster design.

The 2019 124 Spider is an Italian coupe/convertible roadster powered by a 1.4L Turbo Motor 6-speed manual/auto transmission, making it the most powerful 4-cylinder turbo in its category. Producing up to 164hp and 184 lb-ft of torque in the Abarth edition, it is uniquely responsive. Our test Abarth had added racing and performance characteristics that include upgraded aggressive racing facia, branded floor mats, Record Monza exhaust tuning kit and Recaro racing seats.

The other test vehicle was Fiat Abarth 500c – a stout, preppy looking vehicle upon first glance, really reminiscent of its predecessors that were designed to navigate the narrow roadways of Italy. But with closer inspection of the Abarth 500, you will notice subtle performance enhancements: 16-inch hyper black wheels; red brake calipers; Abarth bashing; performance spoiler; turbo boost gauge and dual bright exhaust tips. This affords it a rather large presence in a metropolis like Los Angeles, where the typically more car is better, but the fiat begs to differ.

At first glimpse, you wouldn’t think much of these vehicles from a performance standpoint. Withal, 360 Magazine was cordially invited to Willow Springs Raceway by Fiat Chrysler North America. And education was provided by Skip Barber Racing School to help us take full advantage of the performance capabilities introduced for the upcoming year.

The track day started off at the the rallycross. The rallycross is designed to highlight the braking and handling capabilities of the nimble go kart-like Fiats. With quick turns and short straight always you can feel exactly how balanced and responsive these vehicles are. With the 124’s front and rear Blistein sport suspension, mechanical limited slip differential and front strut tower bar paired with a Brembo braking system it allows the vehicle to perform as desired, a true one with the car experience.

Side by side, we were shuttled to the skid pad. Here, we were able to identify how the Fiat handles on slippery terrain in a tight circle. This course was created to heighten our connection to the throttle, steering wheel and our eyes. As we continued to increase in acceleration the Spider would start to lose grip as we tried to keep a tight radius, but thanks to accurate feedback from the steering rack, throttle and Brembo braking systems you are able to keep the vehicle in complete control.

Then it’s off to the track. This is where the real fun began. Both the 500 and 124 Spider performed astoundingly. A Dodge Hellcat was our pace car as a line of us followed in tandem around the streets of Willow Springs Raceway. It was an unbelievable experience to be able to push these vehicles to their limits, highlighting just how well these vehicles are engineered.

The 2019 Fiat 124 Spider starts standard at $24,995 or $27,795 for the Classica which adds some cosmetic upgrades and some convenience options. $29,290 for the Lusso which comes with the Abarth performance package. A big bang for the buck for a sporty iconic Italian vehicle.

The 2019 500c comes standard at $16,245 and the Abarth package coming in at $21,995. Apart from the aforementioned performance upgrades on the Abarth, it comes with a track experience! Yes, you can stretch your Fiat’s legs on the track like we did just so you can come to appreciate the unique design and performance capabilities that this vehicle was intended to express. 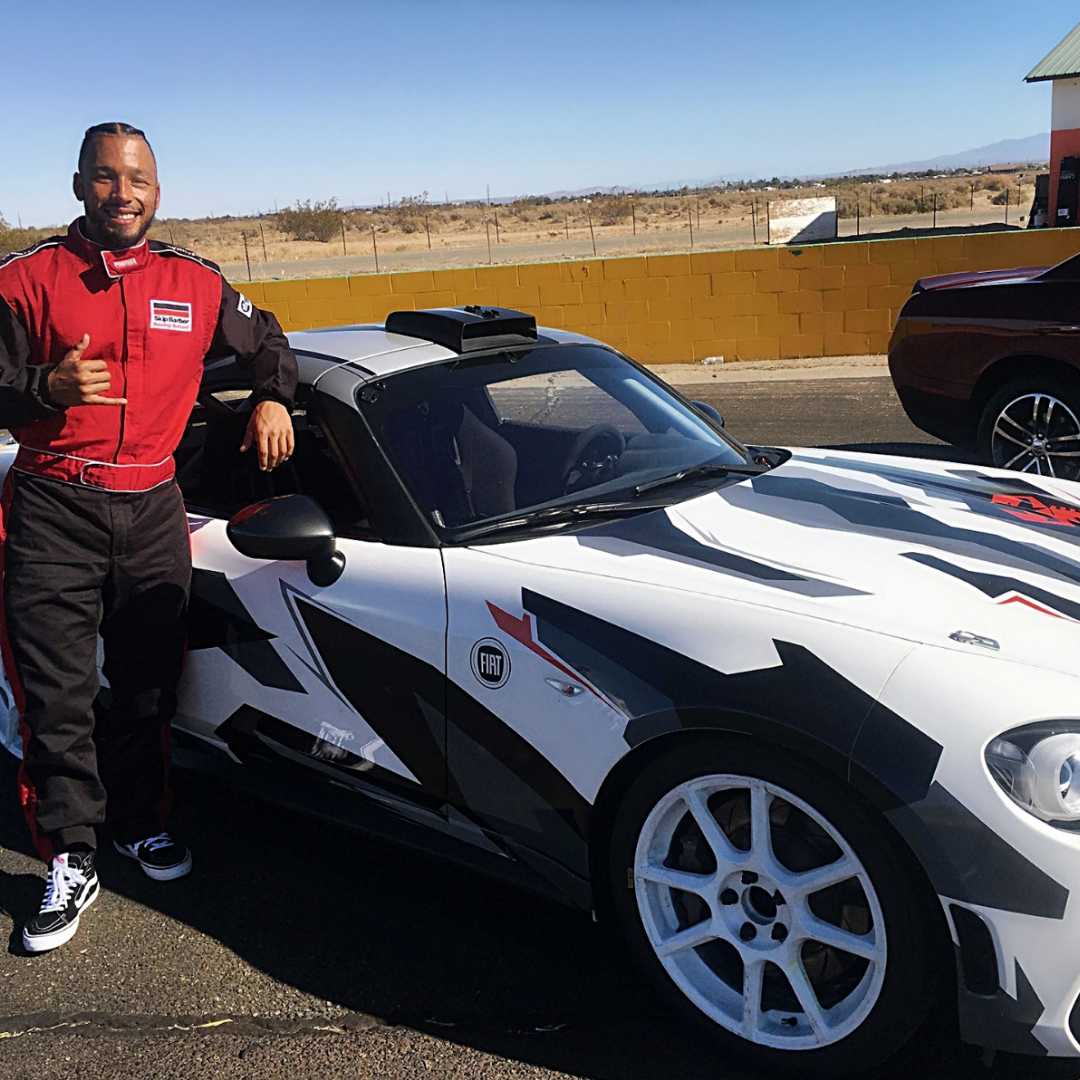 CALIFORNIA EMBRACES THE GOLDEN AGE OF THE AUTOMOBILE

• Recognized as one of the world’s most respected concours, the event acknowledges outstanding original and restored historic automobiles

◦ Tom Kristensen says: “I am looking forward to learning more about the incredible cars and understanding the stories that shape their history, as well as meeting the devoted collectors and the passionate spectators.” Tom Kristensen continues: “Rolex supports the most iconic races and the finest events around the world, always adding an element of prestige to the partnerships. It’s an honor to represent the brand.”

• In addition to several special displays, the 2018 event will present eight featured classes on the famed 18th fairway:

◦ Motor Cars of the Raj

• Rolex partnered the Concours as the Official Timepiece in 1997

• As the celebrations draw to a close on Sunday afternoon, the Best of Show Award, widely considered as the most coveted prize among car collectors, is presented to the most exemplary automobile

• Preceding the Concours, the Pebble Beach Tour d’EleganceÒ Presented by Rolex is an 80-mile journey along picturesque roads through the Monterey Peninsula and Big Sur Coast

• The Tour will take place on Thursday, August 23, 2018 and will trace portions of the iconic 17-Mile Drive

• The largest racing event of Monterey Classic Car Week, the Rolex Monterey Motorsports Reunion relives motorsports history at the iconic 2.238-mile circuit, which has been a focal point of American sports car racing since its inception in 1957

• This year will present approximately 550 race cars, in 15 categories, driving at speed around the track – including the infamous “Corkscrew” – as they were originally intended

• The featured marque for 2018 is Nissan, and the event will highlight the brand’s illustrious racing history that dates to its Datsun heritage

• Historic Datsun and Nissan race cars, including those campaigned by Paul Newman, Peter Brock and Steve Millen will compete on track

• Presented as the ultimate garden party, this event is highlighted by a host of epicurean delights including international culinary pavilions, award-winning wines and spirits, and the most magnificent pre- and post-war sports and racing vehicles

• In addition to the above, the event will feature three Fireside chats, two of which will be led by Rolex Testimonee Tom Kristensen and five times winner of the Rolex 24 at DAYTONA and friend of the brand, Scott Pruett

◦ Sir Jackie Stewart says: “It is always a pleasure to return to Monterey, where the atmosphere and the genuine enthusiasm for motor cars is unparalleled, and this year it will be particularly poignant for me as I mark my 50th anniversary as a Rolex Testimonee. The event will give me the opportunity to reflect on my career in motorsport and the fantastic evolution of the car during this time. I can’t wait to see the style and elegance that will be on show.”

• The 2018 event will also mark the official unveiling of the new RUF CTR, the limited-edition Bugatti Divo and more

• Rolex has been the Official Timepiece of The Quail, A Motorsports Gatheringsince 2005

• The winner of the “Rolex Best of Show” will be admitted into the Rolex Circle of Champions, guaranteeing the car’s continued legacy

AN UNRIVALLED REPUTATION FOR QUALITY AND EXPERTISE

Rolex, a Swiss watch manufacturer headquartered in Geneva, is recognized the world over for its expertise and the quality of its products. Its Oyster and Cellini watches, all certified as Superlative Chronometers for their precision, performance and reliability, are symbols of excellence, elegance and prestige. Founded by Hans Wilsdorf in 1905, the brand  pioneered  the development  of the wristwatch and is at the origin of numerous major watchmaking innovations, such as the Oyster, the first waterproof wristwatch, launched in 1926, and the Perpetual rotor self-winding mechanism  invented in 1931. Rolex has registered over 400 patents  in the course  of its history. A truly integrated  and  independent  manufacturing  company, Rolex designs, develops and produces in-house all the essential components of its watches, from the casting of the  gold  alloys  to  the  machining,  crafting, assembly  and  finishing  of  the  movement,  case, dial  and bracelet. Through philanthropic programs and a broad palette of sponsorship activities, Rolex is also actively involved in supporting the arts, sports and exploration, and encourages the spirit of enterprise, as well as the conservation of natural environments.