The coronavirus has affected many aspects of everyday life, which has prohibited many families, friends and loved ones from gathering to celebrate the millions of graduates across the country. Singer, dancer and entrepreneur Teyana Taylor released a new video entitled ‘Made It,’ which celebrates the class of 2020. Teyana Taylor joins MSNBC’s Ari Melber to discuss her motivation behind releasing the video. Taylor recounts not having a high school graduation, telling Melber “I didn’t get a chance to graduate” as she “was home schooled,” adding “I knew how it felt to not feel celebrated.” Taylor’s daughter, Junie interrupts the interview mid-way through, making her debut on MSNBC.

THE ALBUM is the long-awaited successor to K.T.S.E. (June 2018), Teyana’s second album, one of the five G.O.O.D. Music/Def Jam albums produced by Kanye West during his 2018 sojourn in Jackson Hole, Wyoming. K.T.S.E. (acronym for Keep That Same Energy) set off an 18-month chain reaction for Teyana, starting with its summertime Top 10 R&B smash “Gonna Love Me.” She performed “Gonna Love Me” (in a medley with “Rose In Harlem,” another K.T.S.E. track) on The Tonight Show Starring Jimmy Fallon. Hip-hop audiences embraced the “Gonna Love Me” remix featuring Wu-Tang Clan’s Ghostface Killah, Method Man and Raekwon, whose video was directed by Teyana.

Being a jack of trades has allowed Teyana Taylor to become a master of all. From her smoky melodic vocals to her dynamic dance moves, the entertainer dips in dives between her talents that also include producing, songwriting, acting, directing and everything in between. When it comes to describing herself, the Harlem native can only think of one word: Everything.

“I literally can do everything. I never look at anything as being impossible,” she explains. “I exhaust all options to make what happen when I need to make happen.” Her mantra made her an early favorite to artists like Pharrell, who she signed her first deal with, and later choreographed videos for artists like Beyoncé and Jay-Z. In 2014, Teyana’s love for the arts and R&B earned her the title of the first woman signed to Kanye West’s G.O.O.D. Music imprint.

Between R&B’s identity crisis in the 2010s, Teyana dropped her debut album VII, with tracks like “Maybe” (featuring Yo Gotti and Pusha T) and the sultry “Just Different” shaping her musical persona. The critically acclaimed album debuted at No. 1 on the Billboard Top R&B/Hip-Hop Albums chart in 2014, cementing her position in today’s modern R&B field. “I fought for that raw, hood necessary R&B and now I feel like it’s better than ever,” she says.

After spicing up the R&B charts, Teyana was blessed with the arrival of her daughter Junie with husband and NBA star Iman Shumpert in 2015. “I do all of this for my baby. She’s who I do it for,” she says about Iman “Junie” Tayla Shumpert Jr., her main source of inspiration. “I always show her how to be a leader and a businesswoman. I want her to believe that she can be anything she wants to be and it not be a shocker that she’s a female doing it all.” Soon after, Teyana went on to star in the internet-breaking video for Kanye West’s “Fade,” and scored her first MTV Moonman for “Best Choreography” at the 2017 MTV Video Music Awards.

But it wasn’t until the release of her second album project K.T.S.E (released June 2018) that the world caught up with Teyana’s talents. With her all-female production company The Aunties, Teyana self-directed videos for “WTP,” the RIAA gold-selling single “Gonna Love Me,” (whose remix features Wu-Tang Clan’s Ghostface Killah, Method Man and Raekwon), and recently, “Issues/Hold On.” Teyana has also directed videos for her peers like T.I. (“You”), Monica (“Commitment”), and Lil Duval (“Pull Up” featuring Ty Dolla $ign) with fans like Ms. Lauryn Hill and Elton John praising her boss moves.

Part of what makes Teyana stand out from the rest is her ability to move with precision and poise in everything she does. From the studio to the stage, every idea is a project with the singer front and center with a vision all her own. With her musical inspirations like Aaliyah, Teena Marie, Mint Condition and Janet Jackson speaking to her soul, Teyana is aware her mission is larger than life. “I’m working on me every day and I think that’s my purpose,” she says, comparing her life to a never-ending book.

“I’m still going, still mastering and being a better me.”

LISTEN TO THE PLAN HERE

JABS WILL BE FEATURED IN DEF JAM’S UNDISPUTED COMPILATION, OUT MARCH 8TH!

“Thousands of rappers have spent the past few years experimenting with two-minute, adrenaline rush-style tracks, but Georgia’s Bernard Jabs already seems to have perfected them.” – Pigeons & Planes

“Bernard’s penchant for infectiously fun melodies, breezy beats, and deceptively layered bars will catch on in no time.” – COMPLEX

“Bernard Jabs is the coolest high schooler in the world… With one of the most intriguing voices in the rap game, he makes nearly any flow or cadence sound cool.” – Elevator

In an era where there seems to be a side-story of viral fame or leveraging online connections to rise to the top, 17-year-old high school student Bernard Jabs has carved his budding career out from pure authenticity. In Bernard Jabs’ first uploaded track, Gotta Get It, there is the obvious sound of his younger teenage voice, but within that sound is also the raw skill Bernard holds. His ability to channel the charisma of the music he grew up on and blend it with more current rap trends keeps Bernard circulating as one of the brightest new talents of a generation.

Growing up in Tifton, Georgia during part of the height of Southern rap, Bernard gravitated towards the star power of Lil Wayne. After seeing Wayne in the music video for “Stuntin’ Like My Daddy,” Bernard was entranced in the lifestyle – the cars, the girls, the money, the confidence. Bernard Jabs took to the culture surrounding southern rap and used that history to guide him towards the future. 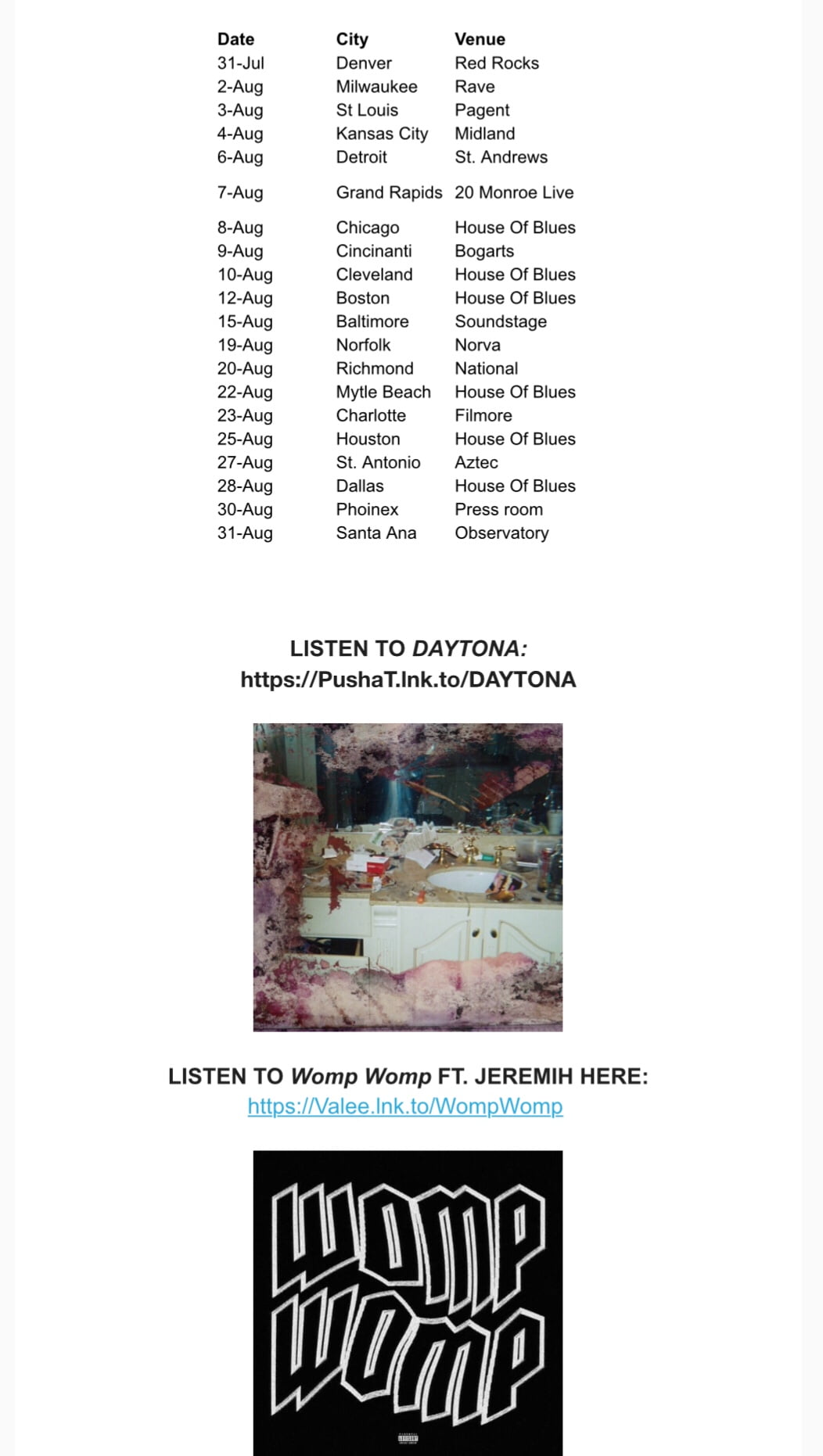 Beginning with its launch later today (details available via Jeremih’s social media platforms), all items in Jeremih’s store (shop.jeremih.com) will include a free ticket-access code for the opportunity to purchase up to two tickets, starting tomorrow June, 13th. A limited number of VIP Meet & Greet packages will also be available for each city, on each date’s primary ticketing platform. Jeremih’s VIP offerings will include a personal photo and meet & greet with the artist, as well as exclusive Jeremih merchandise items. Tickets go on sale Friday, June 15th.

Teyana Taylor is one of the most renowned entertainers of her generation. As a respected recording artist, dancer, choreographer, fitness aficionado, actress and model, she has made waves across a multitude of industries. Her Vh1 reality show Teyana & Iman was highly successful, with the finale show coming in at the #1 watched show on cable television on a Monday night in the 9pm time slot. Teyana opened Junie Bee’s Nail Salon, a 90’s inspired salon in Harlem in an exclusive partnership with OPI Products. Coming up, she will star alongside Blaire Underwood and recording artists French Montana in the Netflix film The Afterparty. She will also star in Vh1’s scripted series, Hit The Floor, premiering on July 10 with upcoming movies Honey 4 and The Trap with Mike Epps and T.I. following. Her collection with GCDS launched recently and she has an ongoing partnership with her own Reebok shoe line.