Today, Reebok officially launches “Courting Greatness,” its FW21 basketball campaign empowering youth to create playable basketball spaces where they may not exist. Central to the campaign is a digital tool that utilizes augmented reality to help players map out court features anywhere – on walls, fences, parking lots and alleyways. Throughout the season, to inspire creativity and build awareness around the tool, Reebok will work with local artists in major cities to construct playable basketball art installations, with the first coming from NYC creative collective New York Sunshine Install Team that will honor the upcoming Question Mid “Iverson Four”.

Carrying forward themes from Reebok’s latest film, CrateMaster, which shines light on the grit and creativity of inner city youth, as well as on accessibility issues in urban areas, “Courting Greatness” celebrates players on a local level. Using existing camera and measurement features in mobile phones, the “Courting Greatness” digital tool enables users to map out the exact (or rough) dimensions of a court, be it a free throw line, 10-foot hoop, three-point line or key.

“For kids and teens living in the city, basketball is the pre-eminent sport, but finding space to play can be especially challenging,” said Inga Stenta, Head of U.S. Marketing for Reebok. “We are continuously inspired by athletes who reimagine competition and find alternative ways to play. ‘Courting Greatness’ will help create access for these kids – and players of all levels and walks – whether they have a court or not.”

Demonstrating the tool’s creative potential and how a makeshift court may come to life, Reebok partnered with New York Sunshine Install Team, a contemporary art and fashion collective based in NYC, to create a court using raw, industrial materials, to initiate the campaign. The temporary installation is located at 36 Fifth Avenue in Brooklyn. Local artists in LA, Philly and Atlanta will then be tapped for subsequent installations throughout the FW21 season, each uniquely bringing to life forthcoming Reebok basketball product releases.

Coinciding with the launch of “Courting Greatness” and this year’s summer games, Reebok is set to release its Question Mid “Iverson Four” sneaker inspired by the ’04 national team uniforms worn in Greece, where A.I. adorned jersey number “4”.

Hoopers can visit HERE today to access the augmented reality tool and get to work. The Question Mid “Iverson Four” is available globally in adult and kids unisex sizing from Foot Locker, Finish Line, Champs Sports and Reebok’s website, among other select retailers, beginning July 31. 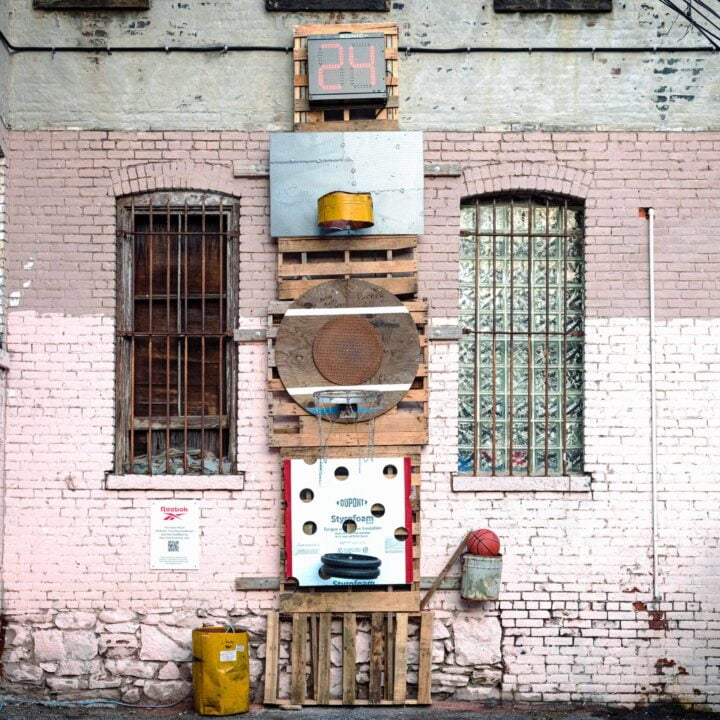 Red Bull has teamed up with the New Orleans Pelicans and renowned visual artist Brandan “Bmike” Odums for NOLA Has Wiiings, a project dedicated to replacing backboards at basketball courts throughout New Orleans.

Bmike selected eight local creatives to transform old local backboards into works of art, which will be on display starting this month at the New Orleans Pelicans’ Smoothie King Center and online at RedBull.com.

New Orleans locals can vote for their favorite backboard starting today via the Pelicans Mobile App or website. The artist with the most votes will have the opportunity to conceptualize and design a full art court that serves the New Orleans community.

Bmike’s custom backboard, for exhibit only, will be on display at Studio BE for the duration of the project.

NOLA Has Wiiings brings artists from around the city together to celebrate, brighten and educate communities through colorful displays of art that showcase NOLA’s unrivaled ability to rebound.