Oxygen, the home for high quality true crime programming, drops viewers in the middle of the action at a dynamic Chagrin Valley area emergency call center in Ohio.  At the center, the responders’ calm demeanor, quick thinking and ability to draw out essential information from callers in the midst of extreme situations is often the difference between life and death. From gut-wrenching to heartwarming, these very first responders hear it all over the course of a 12-hour shift.  The all new series “911 Crisis Center” premieres Saturday, November 6 at 9:00pm ET/PT.

Team members’ experience varies from those who are 20-year veterans to those who are just starting out.  However, all dispatchers are primed and ready to respond to a wide array of panic-stricken callers.  Hearing callers terrorized by shots fired, angered over stolen cars, tearfully pleading during life-threatening medical emergencies and anxiety ridden over lost children makes working efficiently critical.   The dispatchers work to swiftly extract needed intel while calming the callers, providing them with detailed, life-saving instruction and relaying all pertinent details to law enforcement on the ground and en route.

“911 Crisis Center” also examines the friendships between the dedicated professionals. The bond this tight-knit group has formed goes deep.  They support each other through challenging calls and lift each other up when they’re experiencing tough times personally.  However, not every moment of a shift is rife with traumatic calls.  The dispatchers celebrate birthdays, share homemade treats, and crack inside jokes that lighten the mood. They also try to heed the ever present warning to never, ever jinx a shift by saying things seem “quiet” at the call center.

Oxygen is a multiplatform crime destination brand for women. Having announced the full-time shift to true crime programming in 2017, Oxygen remains one of the fastest growing cable entertainment networks with popular unscripted original programming that includes the flagship “Snapped” franchise, “Cold Justice,” “Killer Couples,” “Criminal Confessions,” and breakout hit event series such as “The Disappearance of Natalee Holloway,” “Dahmer on Dahmer: A Killer Speaks,” and “Aaron Hernandez Uncovered.” Available in more than 77 million homes, Oxygen is a network of NBCUniversal Entertainment & Lifestyle Group, a division of NBCUniversal, one of the world’s leading media and entertainment companies in the development, production, and marketing of entertainment, news and information to a global audience. Watch Oxygen anywhere: On Demand, online, or across mobile and connected TVs.

Warner Bros. Unscripted Television is the leading unscripted studio in America with over 50 series totaling nearly 2,500 hours of programming annually across broadcast, cable, streaming, digital, first-run syndication and podcasts. Led by studio president Mike Darnell, the division’s leading franchises include ABC’s “The Bachelor” and “The Bachelorette”; NBC’s multi-Emmy®-winning blockbuster “The Voice”; NBC’s returning Emmy® winner “Who Do You Think You Are?,” “Family Game Fight” and “Home Sweet Home”; Bravo’s “The Real Housewives of New York City”; E!’s “The Bradshaw Bunch”; “Extra”; “The Real”; and the multi-Emmy®-winning “The Ellen DeGeneres Show,” among others. After producing HBO Max’s highly-anticipated “Friends: The Reunion,” the unit’s upcoming projects include NBC’s “The Wheel”; Peacock’s “Paris in Love” and “True Story”; and HBO Max’s “The Real Magic Mike,” to name a few.

The anticipation is continuing to grow ahead of the sixth Peaky Blinders series, as the stars of the hit BBC drama have been caught filming the show throughout the summer.

However, conversations surrounding fan theories about what happens next have been rife since the dramatic ending of the previous season. Some are more unlikely than others, though. But, which scenarios look more unlikely than most when it comes to season six of Peaky Blinders?

This is a theory that has been doing the rounds since the shocking ending to the fifth series. In that final episode, Aberama Gold was viciously killed by the Billy Boys, as Tommy Shelby’s plot to assassinate Oswald Mosley quickly fell apart.

Of course, the Blinders have a history of bringing characters back from the dead, with Arthur making his shocking return to bring down Luca Changretta. However, it is massively unlikely that Gold survived the attack on that night at the rally, despite many fans hoping for the happy ending that Aunt Polly deserves. Other fan theories have rumoured that John Shelby and Inspector Campbell could also return, but they also seem far-fetched.

The most pressing question that fans will have ahead of the final season is who exactly betrayed Tommy and gave Oswald the heads up that they were planning an attack. One name that has constantly been mentioned in that conversation is Michael Gray. Michael and Tommy’s relationship hit an all-time low in the fifth series, as Tommy was warned by the IRA that he wasn’t trustworthy. Michael constantly tried to seize control of the Blinders from Tommy, which led to a dramatic showdown between the two in the final episode.

Certainly, Michael wants to go higher in the gang and take control in the place of Tommy, but it looks almost impossible that he had anything to do with the plan going wrong. Most importantly, he wasn’t even in the loop when it came to the plan, which means that he wouldn’t have had the knowledge to tell Oswald what was going to happen. However, whether Tommy believes him is an entirely different question altogether.

The final scene before the credits was Tommy running into a field with the gun to his head screaming. Many fans feared that this would be the end of Tommy, as his mental health was deteriorating throughout the series, as he would constantly see Grace. However, it is massively unlikely that Tommy would have pulled the trigger, mainly through pride, as that would indicate that Oswald has come out on top in the battle between the two.

More likely, we will see Tommy come back stronger and more determined than ever to find out who the mole was. Arthur and Tommy will likely be at the front trying to find out who it was, while also taking on Oswald and the Billy Boys, and also keeping face for his political career.

Here at 360 Magazine, we had the opportunity to screen Cliff Walkers. The film was without a doubt wonderfully written. From the very beginning of the movie, you could see that it would be an action-packed film. The storyline will keep viewers in suspense on what happens next along with questions that do not get answered until the very ending. The acting was impeccable! Each actor played their character perfectly – from the villains to the spies leading towards two very well written plot twists. This film will appeal to anyone wanting to watch an action filled and, at times, emotional movie.

Based on the script by Quan Yongxian, CLIFF WALKERS, is director Zhang Yimou’s first foray into the spy genre. Set the puppet state of Manchukuo in the 1930s, the film follows four Communist party special agents who return to China after receiving training in the Soviet Union. Together, they embark on a secret mission code-named “Utrennya.” After being sold out by a traitor, the team find themselves surrounded by threats on all sides from the moment they parachute into the mission. Will the agents break the impasse and complete their mission? On the snowy grounds of Manchukuo, the team will be tested to their limit.

20th Century Fox has released a new trailer and poster for their upcoming film FORD v FERRARI, based on the remarkable true story of the visionary American car designer Carroll Shelby (Matt Damon) and the fearless British-born driver Ken Miles (Christian Bale). The film follows Shelby and Miles, who battled corporate interference, the laws of physics, and their own personal demons to build a revolutionary race car for Ford Motor Company and take on Enzo Ferrari at the 24 Hours of Le Mans in France in 1966. FORD v FERRARI also stars Jon Bernthal, Caitriona Balfe, Tracy Letts, Josh Lucas, Noah Jupe, Remo Girone and Ray McKinnon. The film will be released on November 15 by The Walt Disney Studios. 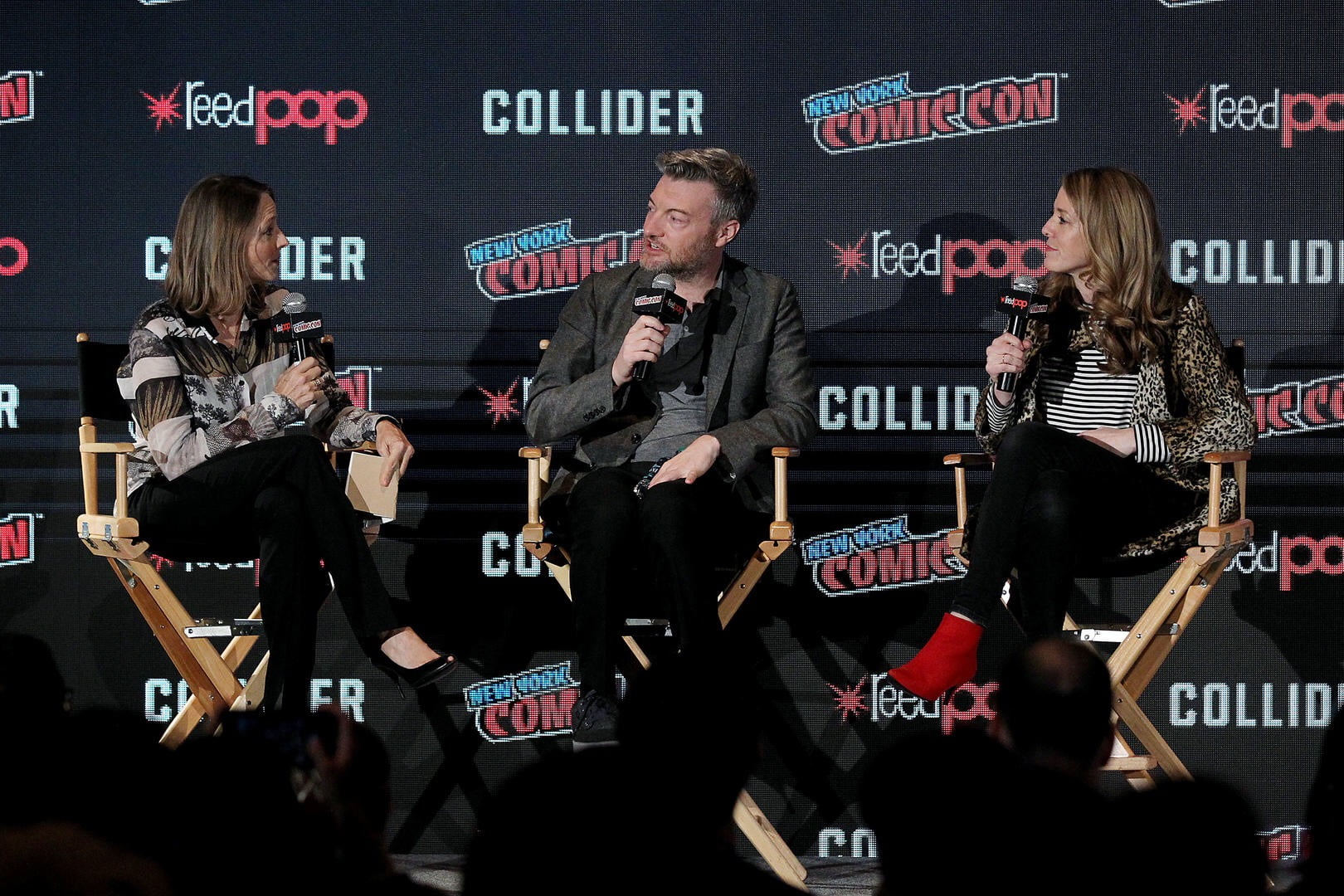 Black Mirror is an anthology series that taps into our collective unease with the modern world, with each stand-alone episode a sharp, suspenseful tale exploring themes of contemporary techno-paranoia. Without questioning it, technology has transformed all aspects of our lives; in every home; on every desk; in every palm – a plasma screen; a monitor; a Smartphone – a Black Mirror reflecting our 21st Century existence back at us. The series is created and written by Charlie Brooker, and executive produced by Brooker and Annabel Jones.