With Halloween just around the corner, it’s the ideal time to start planning the perfect costume for the occasion. Fashion expert Maria Loizou from Karen Millen predicts this year’s hottest pop-culture themed Halloween costumes inspired by the most memorable moments from 2022 so far.

Wednesday Addams from The Addams Family

With the autumn release of Netflix’s new show Wednesday, we can anticipate many costumes replicating the Halloween icon Wednesday Addams, especially as the phrase ‘Wednesday Addams costume’ receives an average of 58,000 monthly Google searches worldwide. Recreate this look by pairing a printed black dress with a white pointed collar, with Wednesday’s signature braids.

Marvel’s Wanda Maximoff, otherwise known as Scarlet Witch, is another one of this year’s most sought-after costumes, with the phrase ‘Scarlet Witch costume’ receiving 50,000 monthly Google searches worldwide. All you need is a red cape and dress, along with a signature Scarlet Witch headpiece. Incorporating a red leather top, corset or catsuit can really help in emulating the Wanda Maximoff look.

Alternatively, dressing as Julia Fox is the perfect 2022 Halloween costume that will definitely be popular this season. The Uncut Gems actress is used to turning heads due to her bold and daring fashion choices, so why not demand attention this Halloween by rocking Julia Fox-inspired double-denim and a dramatic smoky fox eye look.

Tom Cruise’s Maverick is one of the most popular men’s Halloween costumes we can expect to see this Halloween. This year’s box office hit Top Gun: Maverick reignited interest in the classic 80s film, sparking 12,000 average monthly searches for ‘Top Gun costume’ worldwide. Fake moustaches, bomber jackets and aviator glasses make the ideal, minimal-effort costume, perfect for those obsessed with the franchise.

Stranger Things has taken 2022 by storm, so we can anticipate many costumes inspired by the residents of the town Hawkins this year and more specifically, new fan-favourite Eddie Munson. Series four introduced us to the Metallica-playing, Dungeons and Dragons-obsessed Eddie, leader of the Hellfire Club. Eddie’s grunge look can easily be replicated with a Hellfire Club shirt, ripped black jeans and a denim vest. Currently, the term ‘Hellfire Club shirt’ receives 41,000 average monthly searches across the globe.

House of the Dragon

Arguably one of the biggest and most-anticipated shows of the year, House of the Dragon will likely be among the most popular Halloween looks this year. Dressed in a long black robe, white-blonde wig and equipped with a plastic sword, we are sure to see many Daemon Targaryen lookalikes this Halloween season.

Elvis and Priscilla Presley will undoubtedly be one of the most popular couples costumes this Halloween. Austin Butler perfectly portrayed the King of Rock in Baz Luhrmann’s recent Elvis biopic, so much so that searches for ‘Elvis costume’ have increased 335% worldwide over the last 12 months. Replicate Priscilla’s iconic look with a 60s-inspired mini dress and bouffant hair, and style a leather jumpsuit and gelled back hair for the signature Elvis image.

As a result of those pictures of Margot Robbie and Ryan Gosling on the set of Greta Gerwig’s upcoming Barbie film, combined with the recent ‘Barbiecore’ trend, we can expect to see many couples dressed as the iconic plastic duo this Halloween. Whether it is matching neon rollerblading outfits or hot pink cowboy costumes, searches for ‘Barbie Halloween costumes’ reach an average of 15,000 each month worldwide.

We can also expect to see couple’s costumes from Grease this Halloween. Danny and Sandy from the popular 70s musical have always been a classic go-to couples Halloween costumes and this year will be no exception, especially to honour the late Olivia Newton-John. Black leather leggings or trousers, red heels and matching red lipstick complete this look for Sandy, with Danny needing only a leather jacket and slicked back hair, with an optional D.I.Y Rydell cardigan.

This Halloween, we can also expect to see several Euphoria-themed costumes. Since the release of season two earlier this year, fans are still talking about the show’s iconic makeup and fashion choices, which make for perfect group Halloween costumes, full of glitter, vibrant colours and Y2K fashion trends.

Nothing says Halloween like watching the classic film Hocus Pocus, especially as the long-awaited sequel arrives to Disney Plus on September 30th. For friendship groups of three, the Sanderson sisters are the perfect trio to dress as this Halloween, especially as searches for ‘Hocus Pocus costumes’ have risen 317% over the past three months globally.

Sera Labs and CURE Pharmaceutical have the technology and are poised to set the new standard that will change how the world utilizes beauty, health and wellness products. Kidman and Duitch will discuss how cutting-edge delivery system technology, over a decade’s worth of research and development, seventeen published patents, and extensive expertise in proprietary encapsulation and polymer methodologies, which are fused into Sera Labs’ anti-aging beauty, health and wellness products, will demand attention and accomplish this beauty revolution.

“Speaking with Nicole at Collision is a milestone moment for the brand. Science and technology have always been cornerstones for our company success. The world watches what happens at Collison. We are excited to be there and share more about our cutting-edge anti-aging beauty technology,” said Duitch, Sera Labs CEO/Founder and CURE Pharmaceutical Chief Strategic Officer.

Collision will take place virtually on its proprietary software from April 20-22, 2021 and is expected to attract over 40,000 attendees from over 100 countries. To learn more about the Collision Conference, visit the website. Kidman and Duitch will be headlining day two of the conference.

After being miscredited as “Thandie” in her first project—a mistake that has continued for the rest of her career—actress Thandiwe Newton is insisting people use her whole name. All of her future films will be credited with her full name, Thandiwe, which means beloved in Shona.

“That’s my name. It’s always been my name. I’m taking back what’s mine,” Newton said in her May cover story for British Vogue.

Newton also spoke about her experiences with abuse in the film industry, which started when she was sexually abused by director John Duigan at the age of 16 while shooting her very first film, Flirting.

“There’s a moment where the ghost of me changed, you know, and it was then, it was 16. He derailed me from myself utterly. I was traumatized. It was a kind of PTSD for sure. I was so distraught and appalled that a director had abused a young actress, and that it was happening elsewhere, minors getting abused and how fucked up it was. I was basically waiting for someone to come along and say, ‘Well, what shall we do about this?’’’

Although Newton faced a great deal of backlash when she first came forward with her story of abuse, soon the #MeToo movement led to countless more women within Hollywood sharing their own stories of abuse and assault.

But what if there were a getaway promising out-of-this-world scenery, once in a lifetime thrills, a chance to make history and come away from it with a life-altering view of humanity’s totality — all possible without requisite plague masks, twinges of anthropophobia and hand-sanitizer-cracked hands? 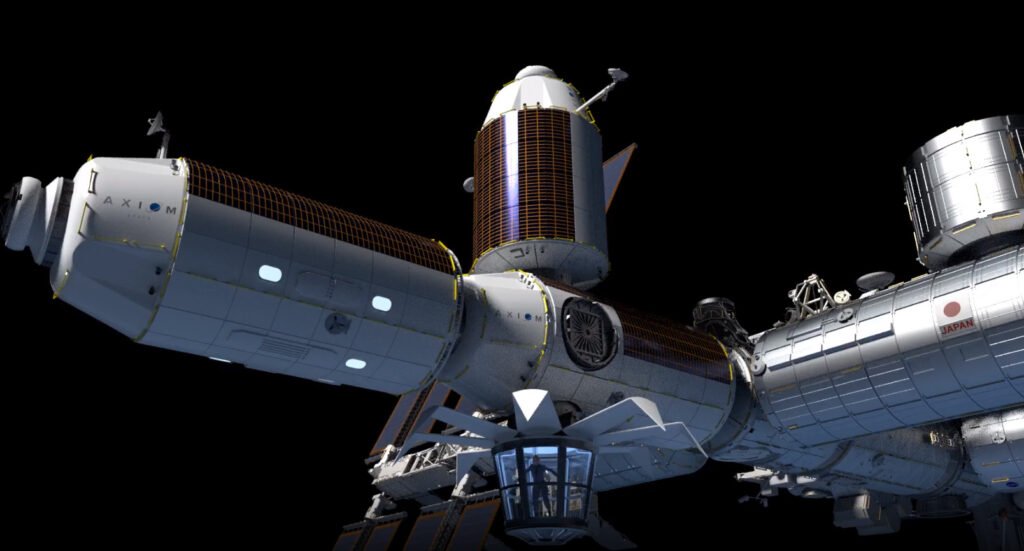 Well, by thinking outside the box (or sphere, in this case), Directed by Roman Chiporukha and Erica Jackowitz, husband-and-wife co-founders of Roman & Erica, Inc., NYC-based lifestyle and luxury travel firm is the first company to offer such an epic adventure. Partnering with Axiom Space, seats are now available for a 10-day total “private astronaut” space flight  experience to escape earth’s confines, designating a low-earth-orbit space station as “home” for eight of those transformative days.

It’s only natural that Mike Suffredini, former director of NASA’s International Space Station, would be willing to lend his expertise as Axiom’s CEO to help  people experience the numerous social, economic and even cognitive benefits of space flight. 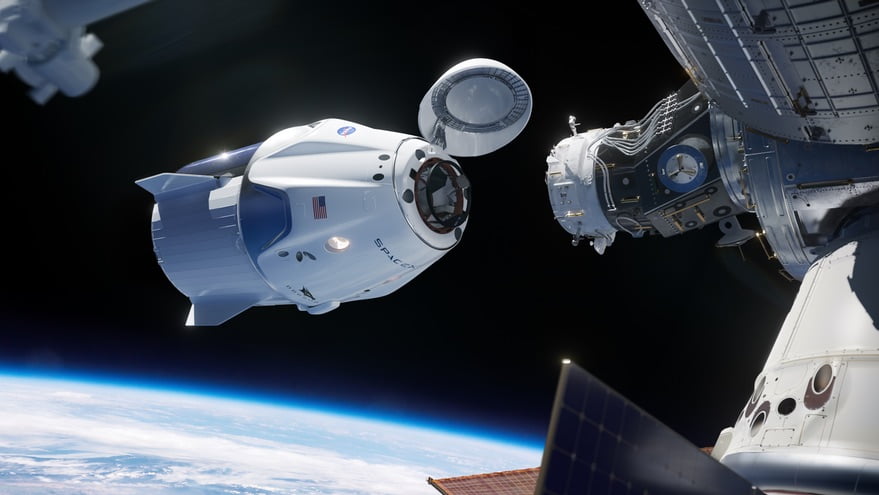 Hyperbole aside, space travel really is life changing. There’s even a term for visualizing earth from space: the “overview effect”, which is a profound sense of interconnectedness and euphoria whereby the viewer sees earth’s fragility, beauty and the oneness of all living things. Astronauts have even reported the cognitive changes re-made their perceptions of life’s purpose. Earthly, holiday vacation digital media memories are no match for life-affirming adventures beyond our atmosphere. 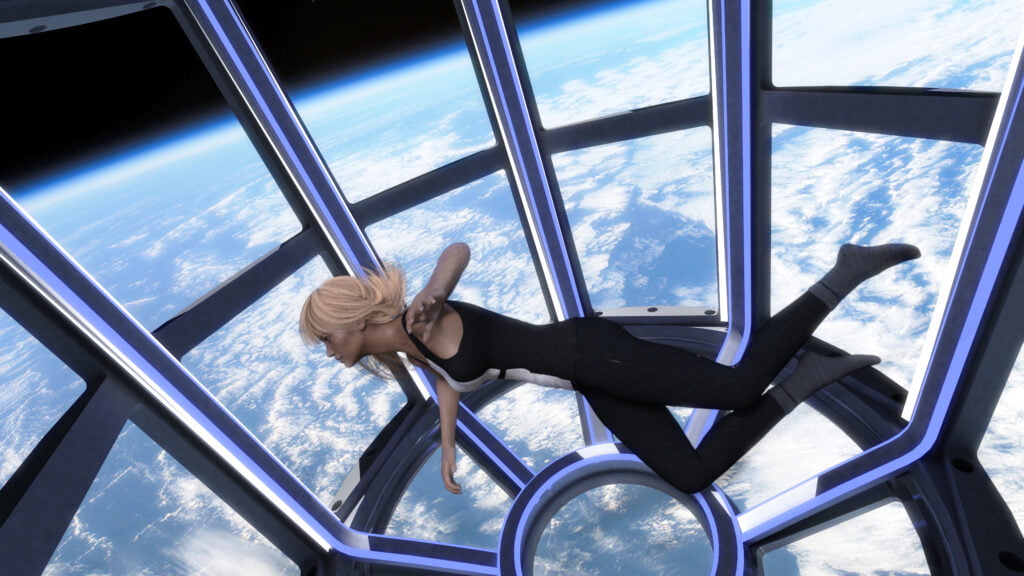 Aside from personal enlightenment, other private space-travel benefits are innumerable. For the industrially inclined, research and development opportunities from space’s microgravity/extreme environment will drive future discoveries unavailable on earth. 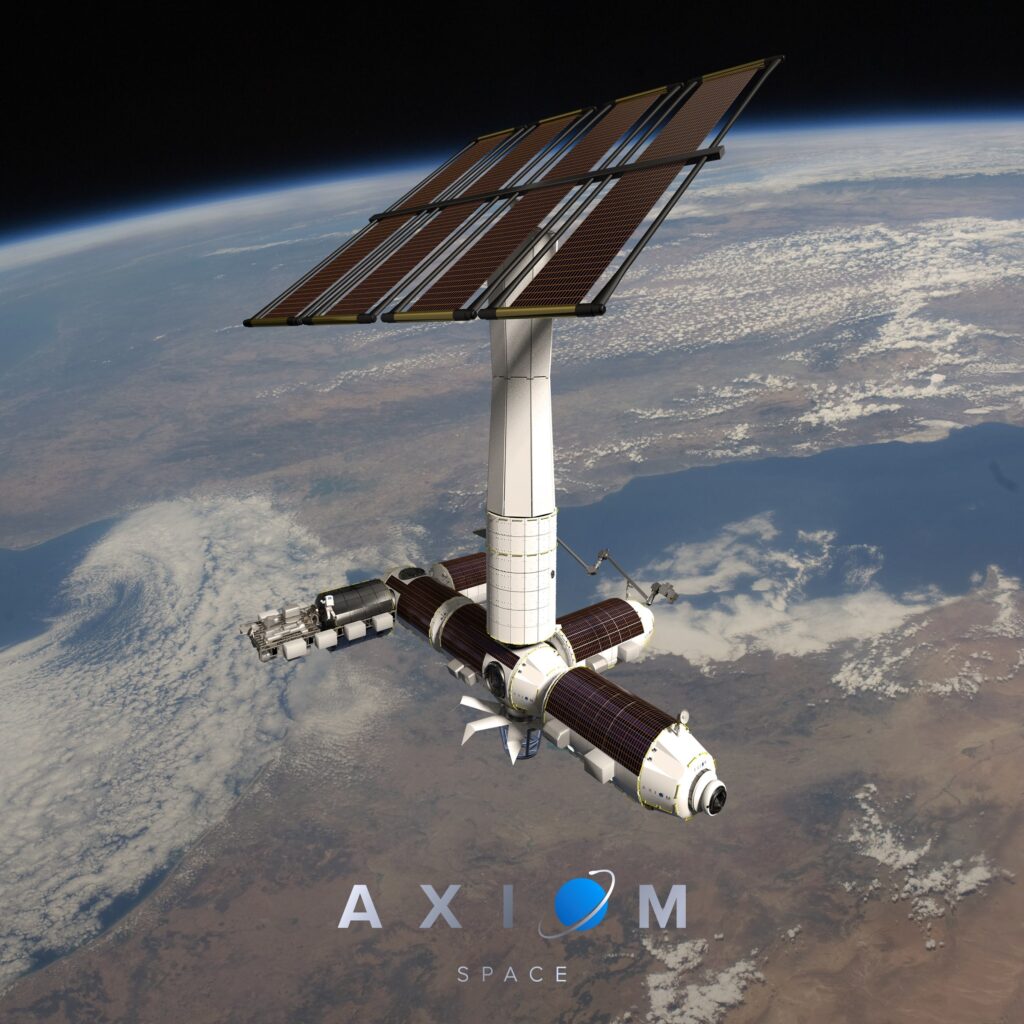 Axiom Station will be constructed while attached to the ISS and, at the end of the ISS’ life, detach and operate on its own into the future.

And if a private astronaut’s proclivities are humanitarian, what better stage could there be to deliver a compelling message encouraging specific global behavioral change. No doubt, messages encouraging climate change awareness would strike an impressive cord with our delicate blue-dot planet framed by the cosmos.

So, how does one sign up for the trip of a lifetime?  Of course, would-be adventurers must be very healthy, and a thorough medical evaluation with a physician’s clearance is required. Once greenlighted physically, a 15-week astronaut training (spread out over almost two years) is held at space agency facilities — with the training purported to be an incredible experience even with feet planted on terra firma. 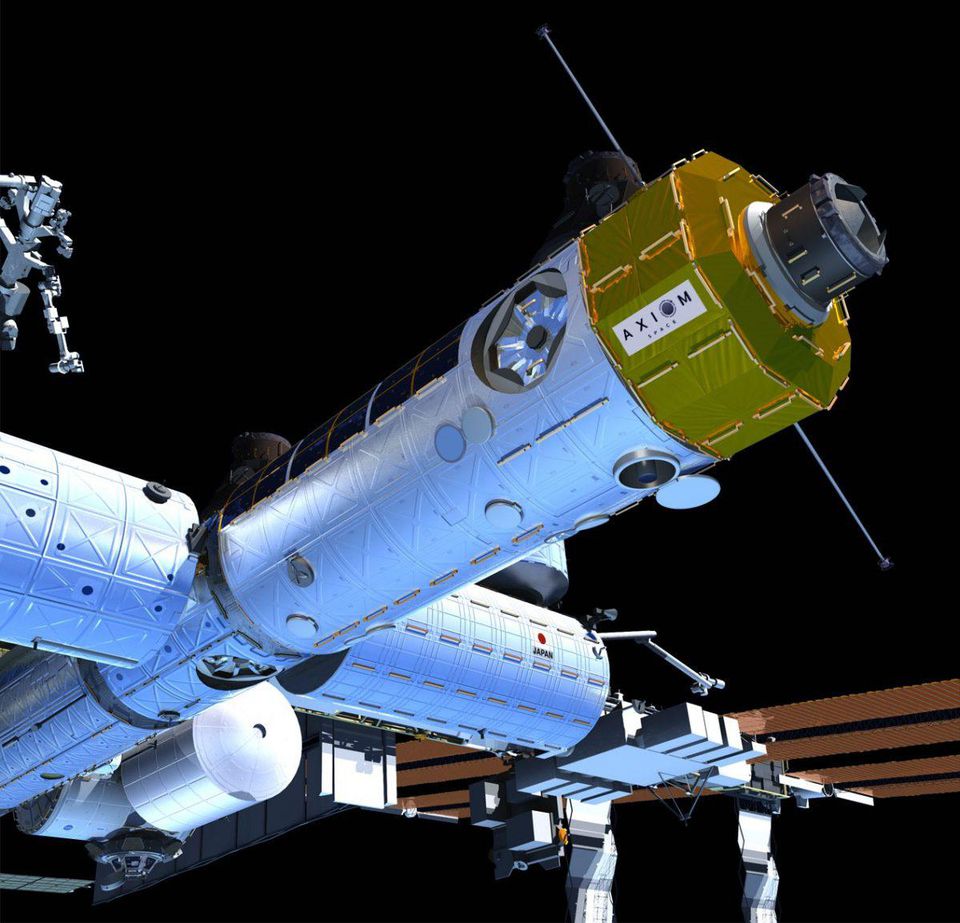 The launch team usually consists of three private astronauts and one career-commander astronaut. Learning to function as a team is crucial not just for safety reasons, but for building mental health ease and camaraderie. The fact that training  takes place in the same ultra-sophisticated, beyond-cutting-edge-tech facilities used by hero astronauts is heady stuff.

And then there’s the cost. With an all inclusive price tag of $55 million, it’s obviously out of reach for nearly all who may want to sail toward the stars… BUT for those who can afford to sign up now, their journeys will pave the way for the next wave of civilian astronauts and, within a relatively short period of time, drive down costs enough to enable hundreds, and eventually thousands, of eager space explorers to afford the mind-bending travel. 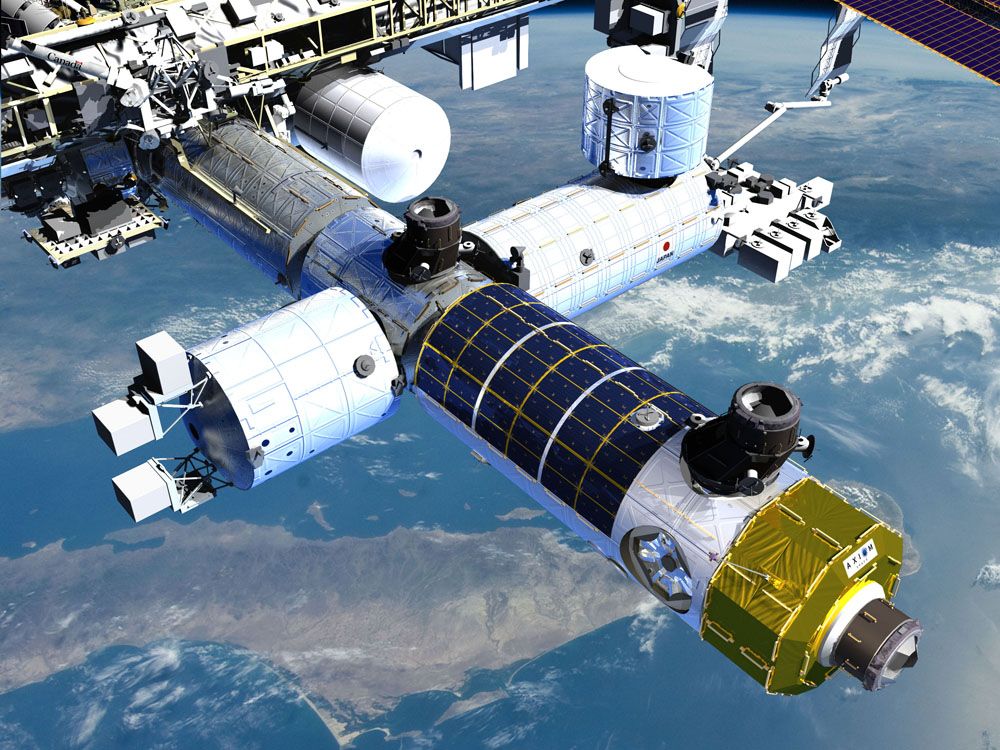 Though Roman & Erica, Inc. sold out the October 2021 flight, an extraordinary accomplishment, two seats are still available for the April 2022 launch. “We are the first travel company to successfully sell private astronaut seats for the ISS mission and are literally travel agents to the stars! It’s outta this world,” said Roman Chiporukha, CFO & Co-Founder of Roman & Erica, Inc. “We are thrilled to partner with Axiom Space. They are virtuosos in the private astronaut space and in the process of building the replacement to the International Space Station which is incredible!”

It’s been whispered that Tom Cruise is supposedly going for a 30 day mission in Oct 2022 with Mission Impossible director pal, Doug Liman. That would leave an extra seat, possibly, to chat up Top Gun while hurtling through space– hard to resist, right? After that, it’s your race to make a reservation with history. And if you’re not keen on travel to outer space, Roman & Erica will be happy to sort whatever else you’re interested in. We hear they have a waiting list to become a member and frankly, we are not surprised.

In this illustration, a SpaceX Crew Dragon spacecraft is shown in low-Earth orbit. NASA is partnering with Boeing and SpaceX to build a new generation of human-rated spacecraft capable of taking astronauts to the International Space Station and expanding research opportunities in orbit. SpaceX’s upcoming Demo-1 flight test is part of NASA’s Commercial Crew Transportation Capability contract with the goal of returning human spaceflight launch capabilities to the United States.