Multiplatinum star Avril Lavigne has released “Bite Me,” her first new music since 2019 and label debut for Travis Barker’s DTA Records. The exhilarating track is available everywhere now, and, to celebrate the arrival of “Bite Me,” the eight-time GRAMMY Award-nominated multiplatinum singer, songwriter, designer, and philanthropist will treat fans to the song’s first late-night television performance on CBS’s The Late Late Show With James Corden tonight. Founded by Barker, DTA Records operates as a worldwide venture with Elektra Music Group.

Welcoming Avril to the DTA Records family, Barker said, “Avril and I have been friends for a long time, but I think I’ve been a fan of hers even longer! She’s a true badass and an icon as a performer, songwriter, and presence. We had gotten in the studio earlier this year, and we were having so much fun that I knew I wanted to ask her to join the DTA team. I’m so stoked she’s now part of the label. I can’t wait for everybody to experience the incredible music she’s about to drop.”

Avril offered, “I’ve always admired Travis and his work. The first time we worked together was 15 years ago on my album The Best Damn Thing’ and I have really enjoyed watching him develop into the producer that he is today. We spent a lot of time writing songs and working on this record together, and signing to his record label, DTA felt like the perfect home for me and my new music. Travis understands my vision as a musician, my creative process as an artist, and my goals at this stage of my career. I am excited to be dropping Bite Me. It’s an anthem about knowing your worth, what you deserve, and not giving someone a second chance who doesn’t deserve you.”

Elektra Music Group Co-Presidents Mike Easterlin and Gregg Nadel commented, “Avril is the rare superstar whose influence only grows with each generation. You can feel her impact across popular music, and it continues to magnify. It comes down to the fact that she’s an amazing songwriter and dynamic performer with undeniable artistic integrity. That holds true in her new music. We’re excited to work with Travis to bring her vision to life.”

Baring her teeth like never before, the high energy and anthemic “Bite Me” was co-produced by Barker, John Feldmann, and Mod Sun. The official music video directed by Hannah Lux Davis is in the final stages of production now. Last week, Avril shared a post on TikTok that teased her signing to DTA Records with a clip of her and Travis performing a snippet of “Bite Me” that has amassed over 10 million views and 1.5 million likes in just a few days. Avril had broken the internet earlier this year with her first foray onto the platform: her viral “Sk8er Boi” post co-starring none other than skateboarding legend Tony Hawk. The clip impressively reached 33.9 million views and generated 6.7 million likes.

Avril is set to launch a world tour in 2022 with dates to be revealed imminently. Stay tuned for much more from Avril Lavigne soon. 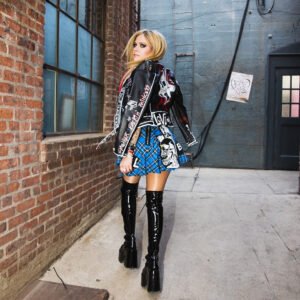 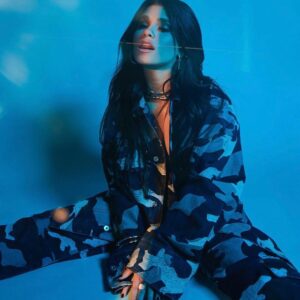 Today, The Soundflowers, featuring Paris Jackson and Gabriel Glenn, debuts the official video for “Your Look (Glorious)”—watch HERE! The full-length video was executive produced and shot by Prince Jackson via his production house King’s Son Productions.

This morning, Paris and Prince appeared on Good Morning America to discuss The Soundflowers, “Your Look (Glorious)” and more—watch their interview HERE. On collaborating with Prince, Paris says, “I was really comfortable working with my brother, it just felt natural.”

The Soundflowers’ six-part Facebook Watch Original Docuseries, “Unfiltered: Paris Jackson & Gabriel Glenn,” is currently airing every Tuesday at 3AM PT/6AM ET through August 4th. The docuseries explores the band’s journey together beyond the music—watch the latest episode HERE and check out the band’s recent performance of “Geronimo” HERE.

The Soundflowers was born after Jackson and Glenn first crossed paths at Los Angeles’ Rainbow Bar and Grill during a TrashDögs performance, the rock ‘n’ roll band fronted by Gabriel. They quickly realized that their musical energies and passions aligned, as Paris recalls, “I started writing around 13 when I bought myself a guitar; I didn’t really start sharing or recording it until I met Gabriel.” Of their first time working on music together at Gabriel’s band’s rehearsal studio, he says, “We showed each other songs and even wrote a few on the spot. Everything fit together so naturally, from our voices to our songwriting style. I had never met someone who fit so perfectly with my sound.”

The sound behind The Soundflowers is an eclectic take on indie acoustic and folk music, as the band attributes their songwriting to influences like The Beatles, Joe Purdy, Ray LaMontagne, Radiohead and The Lumineers. While Paris Jackson hails from one of the most successful families in music history, she is best known for her activism, acting and modeling work, the latter of which has seen her front campaigns for international brands like Calvin Klein, gracing the cover of top fashion magazines, including Vogue and Harper’s Bazaar titles and making her runway debut earlier this year at Jean Paul Gaultier’s final show. On the acting front, Paris has taken on several TV and film roles, collaborating with acclaimed industry professionals, including Lee Daniels, Charlize Theron, Joel Edgerton and Rachel Winters. Aside from music, Paris’ biggest passion has always been in using her platform to shine light on causes important to her, notably going off-script while presenting at the GRAMMY Awards and MTV VMAs, to highlight the Dakota Access Pipeline and events of racial injustice in Charlottesville, respectably. Paris also serves as an Ambassador for the Elizabeth Taylor AIDS Foundation (ETAF) and is passionate about continuing her godmother’s legacy of ridding the stigma and finding a cure for the HIV/AIDS pandemic.

Gabriel Glenn has always leaned into his musical talents, which first emerged while singing in the car with his mom on the way to school and further cultivated by forming bands with friends in his youth and studying music at the collegiate level in his home state of Louisiana. Upon moving to Los Angeles several years ago, Gabriel and a couple close friends formed the “desert rock ‘n’ roll” band TrashDögs, which has found local success performing at popular haunts along the Sunset Strip. Upon meeting Paris and forming The Soundflowers, Gabriel feels more complete as an artist: “She creates so naturally and honestly; it inspires me to be a better songwriter. I think having a unique spirit like hers allows us to channel things we’d never receive on our own.”